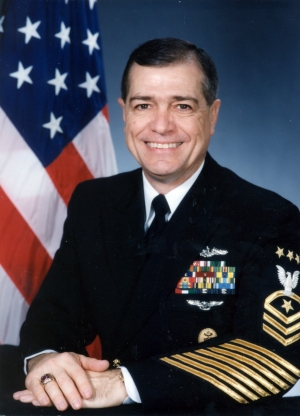 Master Chief Herdt served aboard USS Texas (CGN-39), USS Cincinnati (SSN-693), and on the staff of Nuclear Power School in Orlando, Fla., prior to his tour as Chief of the Boat aboard USS Skipjack (SSN-585). He has served as Command Master Chief at Nuclear Field “A” School in Orlando, Fla., onboard USS Theodore Roosevelt (CVN-71), and at Naval Training Center Great Lakes, Ill. In 1996, he was selected to serve as Force Master Chief for Chief of Naval Education and Training in Pensacola, Fla.

Master Chief Herdt is a graduate of the U.S. Navy Senior Enlisted Academy and U.S. Army Sergeants Major Academy. He has earned a master of business administration with a concentration in human resources management from Florida Institute of Technology. He is qualified as an Enlisted Aviation Warfare and Surface Warfare Specialist, as well as in the Submarine Service. Master Chief Herdt is certified as a Master Training Specialist. His personal awards include the Meritorious Service Medal with two Gold Stars, Navy Commendation Medal and Navy Achievement Medal with Gold Star.