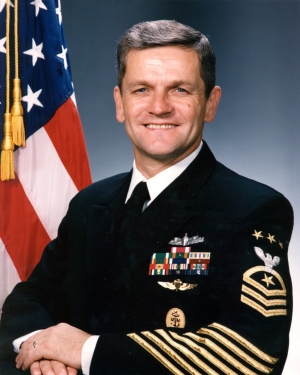 Master Chief Hagan was born in England. He was reared and attended schools in Asheville, North Carolina. After high school, he enlisted in the Navy in December 1964 and attended basic training at Recruit Training Center, San Diego, California. He then attended Electronics Technician "A" School at Naval Training Center, Treasure Island, California, and completed a short assignment at Naval Air Test Center Patuxent River, Maryland.

After he completed Ground Control Approach Radar Technician School at Naval Air Technical Training Center, Glynco, Georgia, he reported to Naval Air Station, Whidbey Island, Washington, as the Leading Petty Officer for the Maintenance Division. During his tour there, he earned an Associates of Arts degree.

Hagan's next assignment was aboard USS Lester (DE-1022), homeported in Naples, Italy. During a subsequent tour of sea duty as a maintenance technician at Underwater Demolition Team 21 in Little Creek, Virginia, he was advanced to Chief Petty Officer and qualified as a naval parachutist. While assigned to a shore tour at Naval and Marine Corps Reserve Center in Louisville, Kentucky, he was advanced to Senior Chief Petty Officer. While there, he earned his Bachelor of Business Administration degree from McKeendree College.

In September 1980, he reported aboard USS Richmond K. Turner (CG-20), homeported in Charleston, South Carolina. While there, he qualified as an Enlisted Surface Warfare Specialist and was advanced to Master Chief Petty Officer. Shortly after reporting to his next assignment at the Naval Air Technical Training Center at Memphis, Tennessee, he was selected as the Force Master Chief for the Chief of Naval Technical Training.

In April 1988 Master Chief Hagan reported to Pre-Commissioning Unit Philippine Sea (CG-58) in Norfolk, Virginia, as the Command Master Chief. After commissioning, USS Philippine Sea reported to her homeport in Mayport, Florida, and subsequently deployed to the Red and Mediterranean Seas in support of Operation Desert Shield and Desert Storm. During this tour of duty, he qualified as Officer of the Deck (Underway).

Soon after reporting to Helicopter Anti-Submarine Squadron (Light) 48 at Mayport, Florida, as the Command Master Chief, Hagan was selected as the eighth Master Chief Petty Officer of the Navy. He assumed his current position on August 28, 1992.