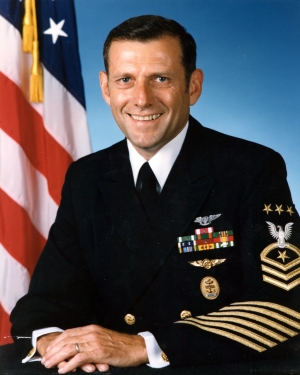 Duane R. Bushey was born in New Hampshire. Following graduation from Wicomico Senior High School in Maryland, he enlisted in the Navy in June 1962.

Master Chief Bushey received recruit training at the Naval Training Center in Great Lakes, Illinois, and completed Aviation Electrician “A” school in Jacksonville, Florida. He first saw duty at the naval Air Test Facility at the Naval Air Station in Patuxent River, Maryland, followed by further technical training in an advanced electronics “B” school. He then served on board the aircraft carrier USS Kearsarge (CVS-33), with two follow-on tours as a flight instructor for fleet replacement navigators with Heavy Attack Squadron One Twenty-Three (VAH-123) at the Naval Air Station, Whidbey Island, Washington and Tactical Electronic Warfare Squadron One Thirty (VAQ-130) at the Naval Air Station in Alameda, California, where he served as Celestial and Radar Navigation Instructor.

Master Chief Bushey then served as the Assistant Aircrew Division Officer for the Aircraft Ferry Squadron Thirty One (VRF-31) in Norfolk, Virginia. While serving with VRF-31, he qualified as an overwater navigator in several aircraft, as flight engineer for P-3 Orion aircraft and bombardier/navigator for A-6 Intruder aircraft.

Read more about MCPON Bushey in excerpt from Winds of Change: The History of the Office of the Master Chief Petty Officer of the Navy, 1967–1992.