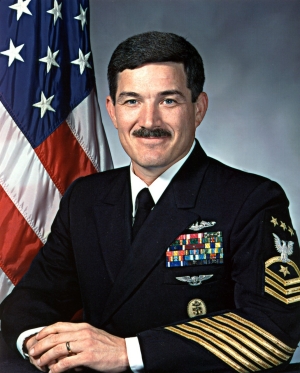 Born in Missouri and raised in Kansas, Master Chief Scott enlisted under the delayed entry program in December 1976. Completing Basic Training in October 1977 he went on to attend Basic Submarine School and Missile Technician "A" and "C" schools. In 1978, Master Chief Scott reported for his first tour of duty aboard USS John Adams (SSBN-620). In 1983 he attended Instructor Training in Norfolk, Virginia.

He was then assigned as an Advanced Missile Flight Theory and Checkout instructor for the Poseidon and Trident missiles at the Fleet Ballistic Missile Submarine Training Center, Charleston, South Carolina. There he earned his designation as a Master Training Specialist.

Scott then served as the Missile Division Leading Chief Petty Officer on USS James Madison (SSBN-627). From there he was selected for his first overseas tour to the forward deployed SSBN base in Holy Loch, Scotland, where he worked for Commander Submarine Squadron 14 as the Squadron Missile Technician from 1988 to 1990.

Master Chief Scott's first command senior enlisted billet was aboard USS Jacksonville (SSN-699) as "Chief of the Boat" from 1992 to 1995. His following Command Master Chief tour was as the base CMC at Naval Security Group Activity, Winter Harbor, Maine from 1995 to 1998.

In February of 1998, he reported as Command Master Chief of Strike Fighter Squadron 192 (VFA-192), the "World Famous Golden Dragons" based in Atsugi, Japan, and deployed aboard USS Independence (CV-62) and USS Kitty Hawk (CV-63).

In November 2000, he was selected to serve and as the CNO-Directed Command Master Chief for Naval Forces Central Command and Fifth Fleet. He assumed his current position as the tenth Master Chief Petty Officer of the Navy on April 22, 2002.

MCPON Scott has completed fifteen deployments aboard Aircraft Carriers, Fast Attack Submarines and Ballistic Missile Submarines. These deployments include the Arabian Gulf, Western Pacific, North Atlantic, Mediterranean and a variety of patrols and missions on board submarines. He has earned a Bachelor of Science degree from Southern Illinois University. His personal awards include the Meritorious Service Medal, Navy Commendation Medal (five awards), Navy Achievement Medal (four awards) and various service and campaign awards.