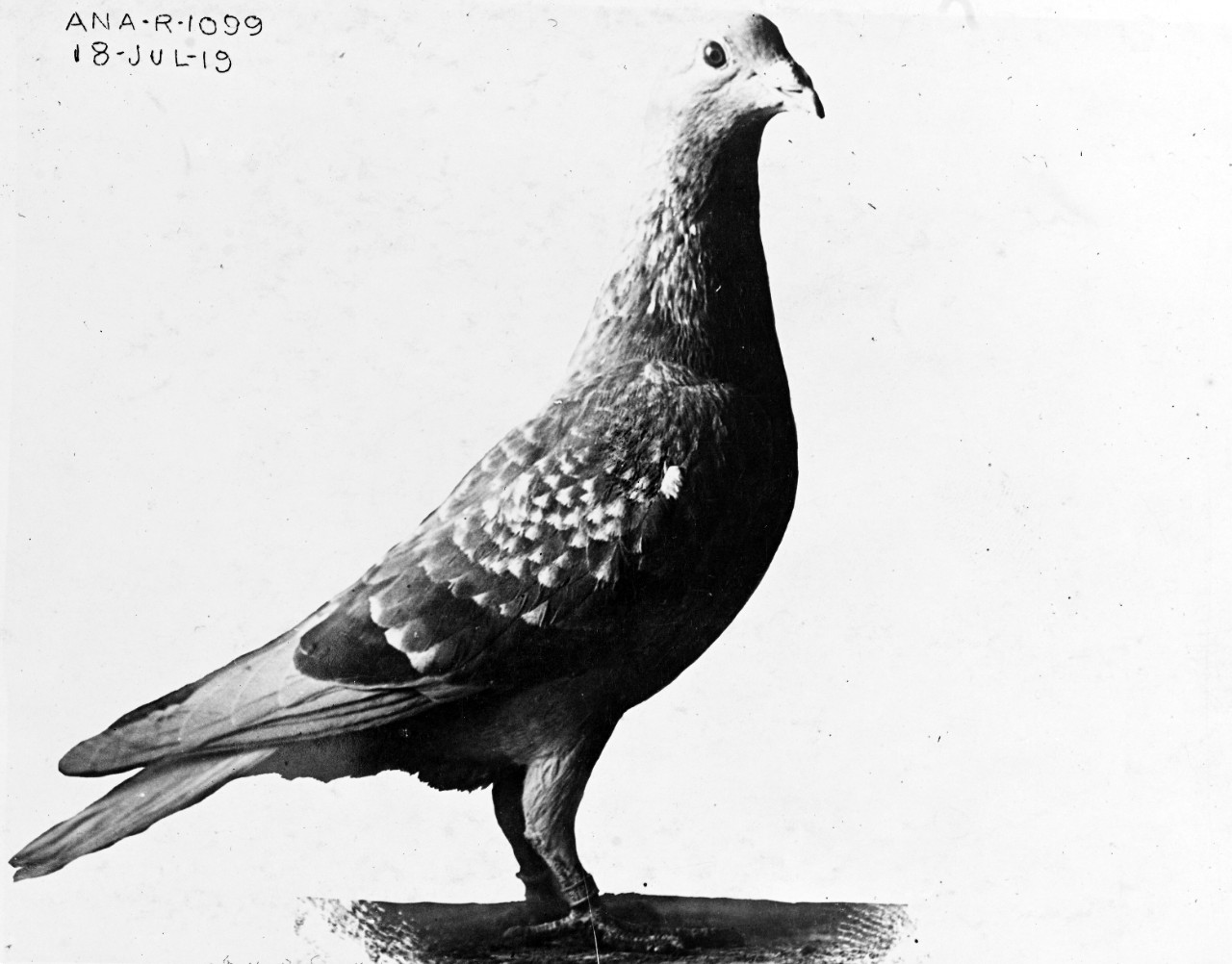 Homing pigeons played an essential role in Allied communication during World War I. This photograph features "Peerless Pilot," one of the most celebrated naval messengers. Beginning at only 15 months of age, Peerless delivered nearly 200 messages during the last year of the war (NH 153-A).

Carrier pigeons played a role in naval communications from the late 1880s through World War II.

The Naval Academy in Annapolis, Maryland, was the first command in the Navy to breed and train carrier pigeons. A Naval Academy French professor, Henri Marion, built an experimental pigeon loft in an academy boathouse in 1891. He received the pigeons from the Army’s Signal Corps, which had built an experimental pigeon loft in Key West, Florida, in 1888, but closed their program three years later. While with the Army, the birds had proven their ability to fly over water, routinely carrying messages from Havana, Cuba, back to their loft in Key West.

Convinced that pigeons could improve naval communications at sea, Marion began training the birds on the Naval Academy school ship, USS Constellation. Academy pigeons were conditioned to fly from the ship back to their home loft at Annapolis. They were released from shorter distances at first, then the distance was gradually increased until they were to flying up to 150 miles.

In 1893, the pigeons on Constellation proved their worth in an emergency. A seaman was killed in an accident when Constellation was 12 miles out from Annapolis. Two birds carried duplicate messages requesting that the academy’s screw tug Standish be sent to pick up the body. The message was sent at 0930 on 7 June 1893. Less than three hours later, the Standish was alongside the Constellation.

When the United States declared war on Spain in April 1898, the Navy’s messenger service birds carried official messages from ship to shore—mostly from ships operating off the East Coast on their way to the Caribbean. The pigeons flew to stationary pigeon lofts along the Atlantic seaboard, carrying messages from the fleet in a small aluminum capsule attached to their leg.

In 1899, the Navy shifted its focus to radio communications. By 1902, all new Navy ships were outfitted with wireless telegraph equipment. With this new technology available, the Navy disestablished the Naval Pigeon Messenger Service and auctioned off all its pigeons. 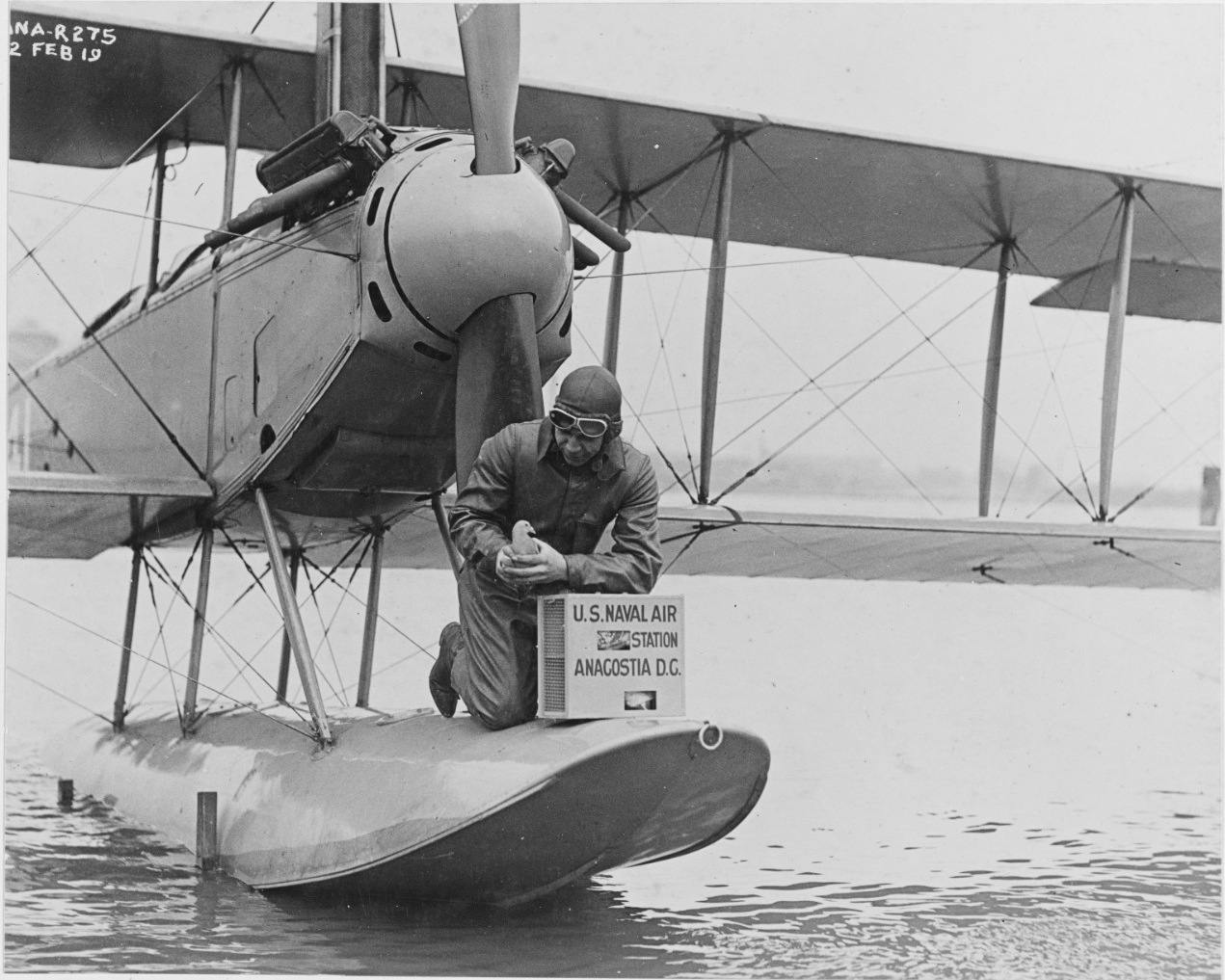 The U.S. Navy began using homing pigeons again during World War I. Most of the pigeons used on these missions came from military or private lofts in Belgium and France.

Naval aviators carried them aboard seaplanes while conducting antisubmarine missions along the French coast. The aviators used pigeons to dispatch messages in the event of a crash or other emergency as wireless radio sets were large and cumbersome to carry aboard aircraft. Upon release, the pigeon would carry the message to its home loft at one of the U.S. Navy air stations in France. Once at the pigeon loft, the pigeon would go through a little slot that rang a bell and the pigeon master would retrieve the note.

One notable incident occurred on 22 November 1917, when U.S. Navy Ensign Kenneth R. Smith and his crew departed U.S. Naval Air Station at Le Croisic, France, in foggy weather and crashed. The pigeons on board were released to deliver an emergency message back to base. A search team subsequently rescued Smith and the crew.

During World War I, the Navy developed a “pigeon trainer” enlisted rate. Pigeoneers, as they were often called, fell under the quartermaster rating. They were identified as Quartermaster (Pigeon), QM(P). Sailors went to a specialist’s  school for six to 12 months then received orders to naval air stations with pigeon lofts.

In 1918, the Navy published a manual for pigeon trainers entitled Instructions on Reception, Care and Training of Homing Pigeons in Newly Installed Lofts at U.S. Navy Air Bases. The manual contained detailed information on how the birds should be fed, housed, and trained. It included such things as when to bathe them (every other day and never on extremely cold days); how to build rapport with a bird how to properly hold a bird; how often to clean their perches and nest boxes; and what they should be fed (50 percent Canada peas, 25 percent Argentine corn, 15 percent Kaffir corn or milo maize, and 10 percent whole rice).

Naval Air Station Anacostia, which ran the largest pigeon school in the country, maintained a loft with 300 birds. They were well cared for, with bright and airy lofts that had running water, electricity, and a hospital ready to provide medical care if they fell ill. Armed guards patrolled their grounds at night. 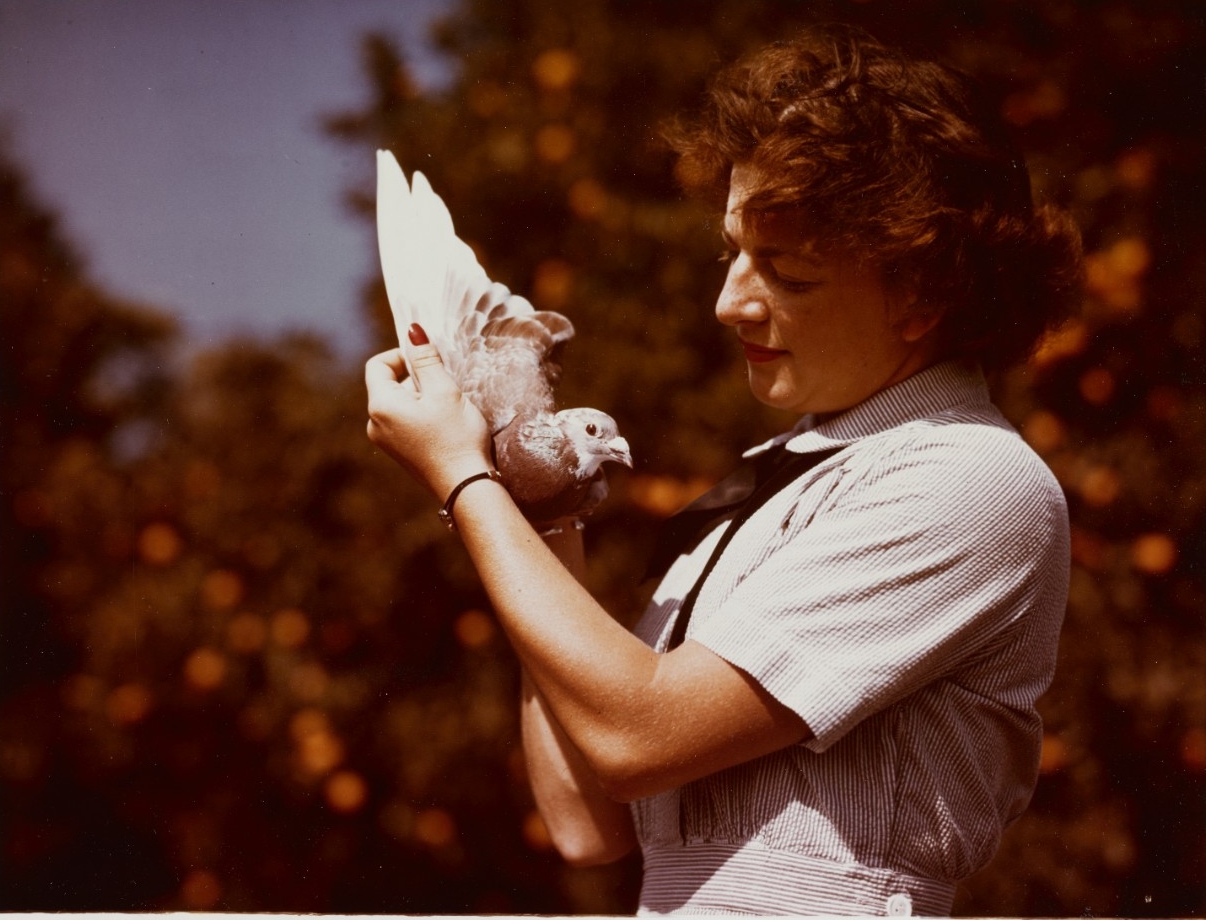 Specialist (X) 2nd Class Marcelle Whiteman holds one of the 200 carrier pigeons based at NAS Santa Ana, California, circa June 1945. The birds were used to transmit communications from the air to the station when radio silence is in force. One of the occupations covered by the Specialist (X) rating was pigeon trainer (80-G-K-5489).

In 1941, the pigeon trainer rating was moved to a new rating designation known as Specialist X—abbreviated as SPX(PI). The specialist rating was created in late 1941 to allow for new enlisted ratings that were needed during wartime, but didn’t fall in the established rating structure.

In 1943, the rating opened up to Women Accepted for Volunteer Emergency Service (WAVES). They trained at the pigeon school at Naval Air Station Lakehurst, New Jersey. Requirements for women were the same as men—they should have experience working with birds or other animals and know how to drive a car in order to pick up pigeons that got lost during training sessions.

Naval Air Station Lakehurst was also the prime operating base of airships and dirigibles. During World War II, pigeons were routinely taken on airships and dirigibles conducting stateside antisubmarine patrols. They were used when radio silence was in force, or during radio failure. Every airship carried six crated pigeons. Typically, pigeons carried messages in black plastic capsules attached to one of their legs, but when an emergency message was sent, a red capsule was used.

Ratings and the Evolution of Jobs in the Navy: The United States Navy’s World of Work: Nearly 200 Years of Evolution