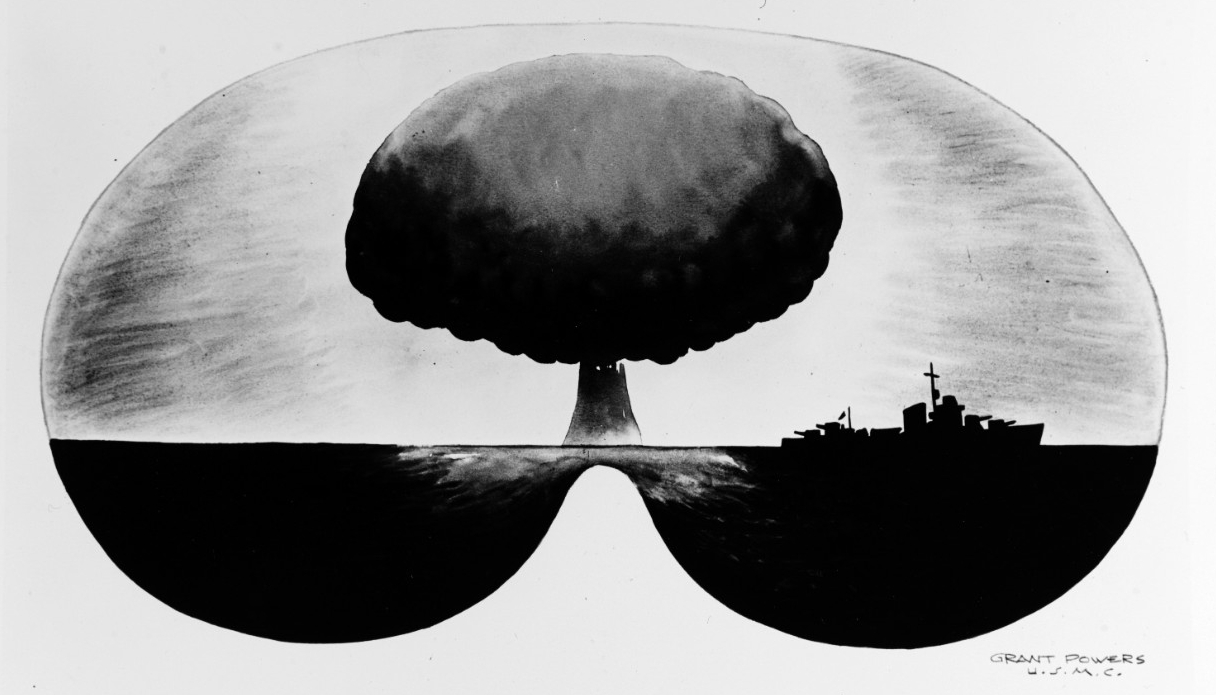 On 25 August 1945, Senator Brien McMahon (D-CT) openly advocated for the further testing of the atomic bomb on captured Japanese ships. This idea was soon circulating among all of the branches of the U.S. military. On 16 October 1945, Chief of Naval Operations Ernest J. King wrote to the Joint Chiefs of Staff (JCS) in favor of testing the atomic bomb on naval vessels.[1]  This memorandum triggered negotiations with the Army engineers at the Manhattan Project to make a plan for these tests.

The JCS appointed Vice Admiral William H.P. Blandy, Deputy Chief of Naval Operations, Special Weapons, as the commander of the joint Army-Navy task force. The military purpose of these tests was to examine the effect of this type of bomb on naval vessels. They intended to study the damage to the ships to develop improvements in “(1) ship design; (2) tactical formations at sea, and anchoring distances in port; (3) number and location of operating bases and repair yards; and (4) strategic disposition of ships.”[2] Vice Admiral Blandy coordinated all the preparations for three tests—Able, Baker and Charlie— including the selection of the site. 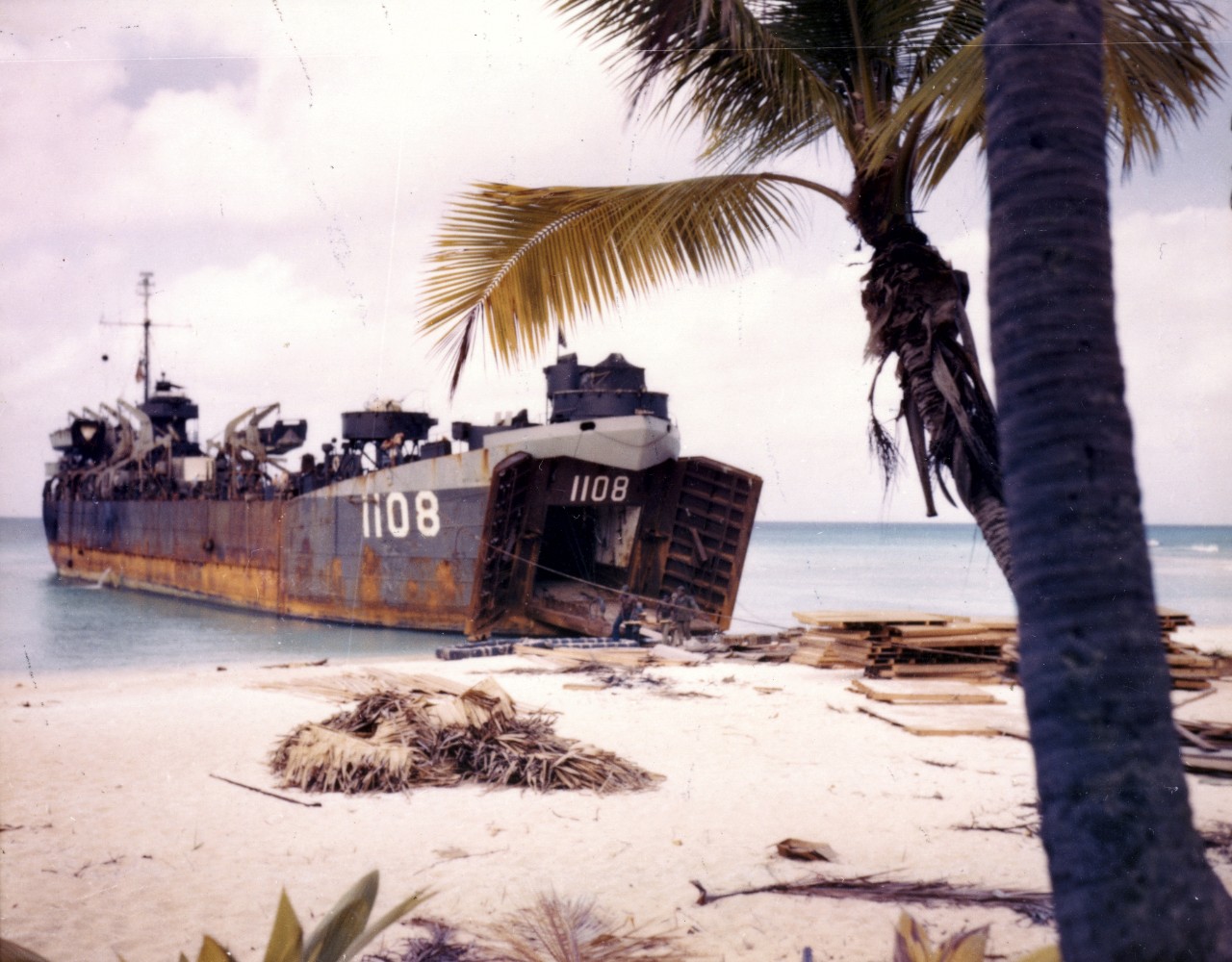 The lagoon of Bikini Atoll in the Marshall Islands matched all the criteria. On 10 February 1946, Commodore Ben H. Wyatt, commander of the nearby Kwajalein Naval Air Base, spoke to the natives of the Bikini Atoll. One-hundred-sixty-five natives of Bikini Atoll voted to leave their homes temporarily.[3] They left their home with the reassurance that they would be able to return after the tests were complete. In March 1946, the U.S. Navy relocated the Bikini inhabitants to the island of Rongerik, 125 east of Bikini atoll. 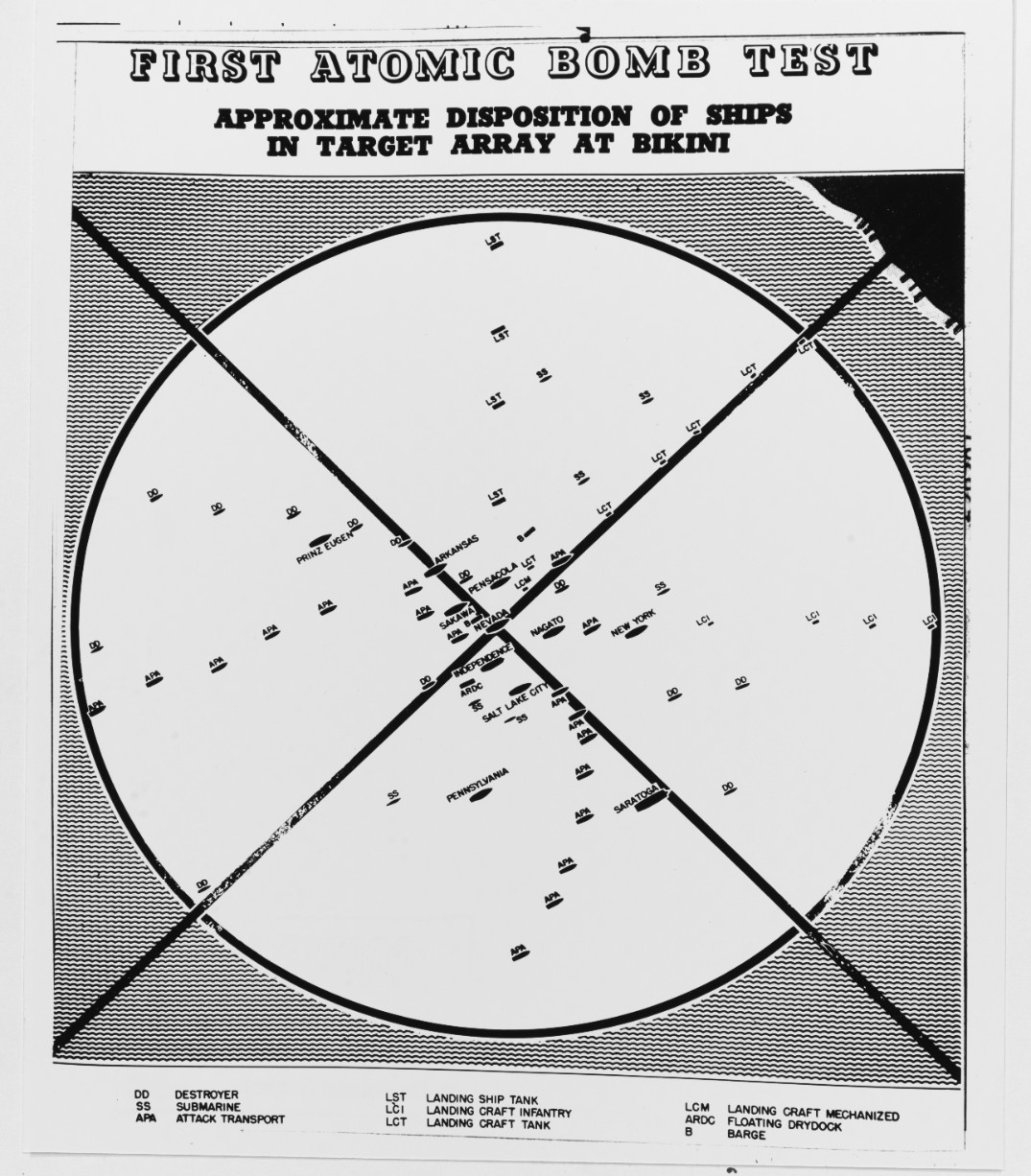 On 1 July 1946, the target fleet of 95 ships waited in the lagoon of Bikini Atoll. The task force placed animal subjects on board the various ships to study for “diagnosis, treatment and general protection of possible future ship crews which may be exposed to this bomb.”[4]

The support fleet, consisting of more than 150 ships, withdrew to a distance of approximately 10 nautical miles from the atoll.  At 0900, the first bomb was dropped from a B-29 bomber and detonated at an altitude of 520 feet above the target fleet. Following Test Able, crews boarded the surviving target vessels for inspection, instrument recovery, and re-mooring for the next test. Five of the 95 ships sunk in this first test, although many suffered from topside damage because of the aerial blast.[5]

On 25 July 1946, the task force conducted their first underwater nuclear explosion: Test Baker. This bomb detonated 90 feet beneath the surface of the water. This underwater explosion threw tons of radioactive water onto to the decks of the target fleet.  Eight of the ships in the target fleet were reported sunk, including the aircraft carrier Saratoga (CV-3).[6] The Navy towed eight ships and two submarines to Hawaii for further radiological inspection. Twelve ships were determined to be safe and crewed for their return voyage to the United States. The surviving contaminated ships were towed to nearby Kwajalein Atoll for possible decontamination or scuttled in the lagoon of Bikini Atoll.[7] Altogether, the blasts from Test Able and Baker sank 14 ships, not including those later sunk or scuttled due to their radioactivity.[8] 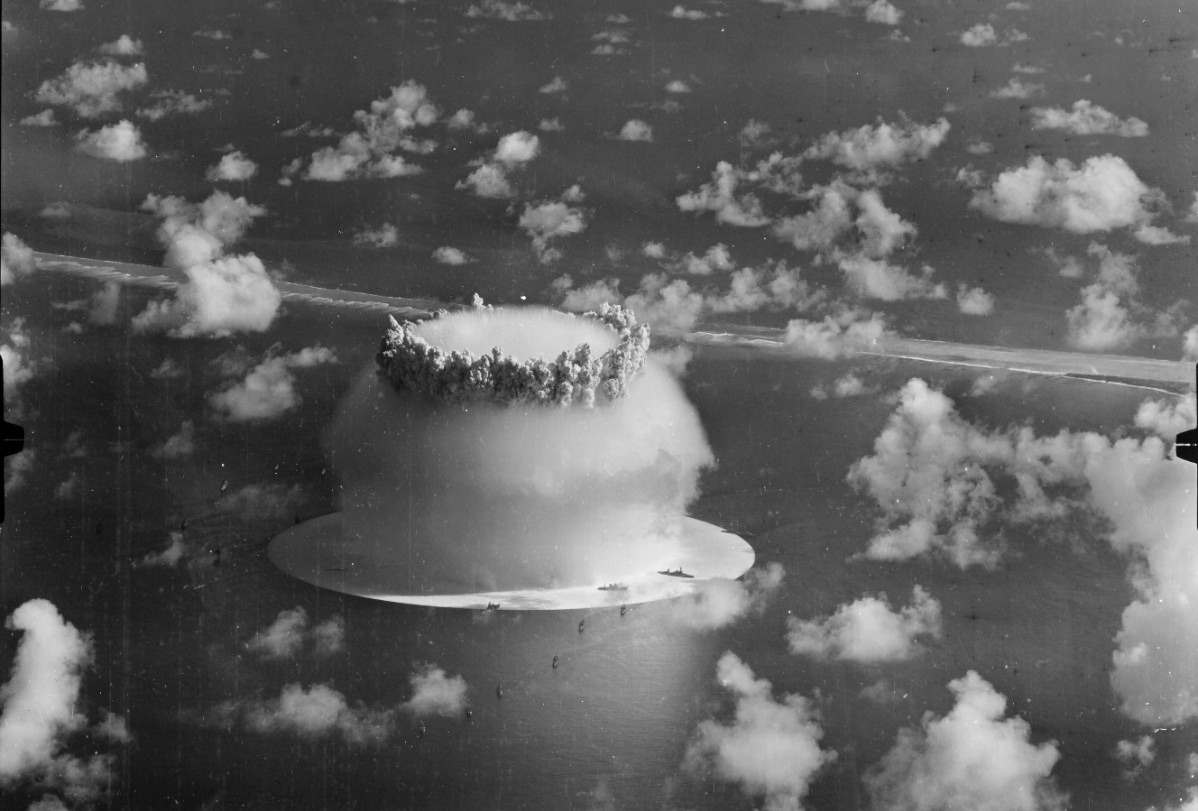 All photos of the tests, official and press, became part of a carefully curated selection of images that would later be released to the public. The President’s Civilian Evaluation Commission included congressional representatives and civilian scientists. They presented their findings to President Truman alongside the report from the Joint Chiefs of Staff. Their initial reports confirmed the deadly effect of lethal radiation on the animals aboard the target fleet.[9] The Joint Chiefs of Staff, with the approval of the President, postponed the final test, Test Charlie, due to concerns about decontamination and radiation safety. On 1 November 1946, the JCS officially dispersed the Joint Task Force One. In January 1947, the Atomic Energy Act of 1946 went into effect and the Atomic Energy Commission replaced the Manhattan Project. The new agency assumed civilian control of all aspects of atomic energy in peacetime.

Between 1947 and 1958, the U.S. Atomic Energy Commission conducted 23 detonations at Bikini Atoll. The U.S. government allowed the natives of Bikini to return in 1970, but they were evacuated again in 1978 due to high levels of radiation in the environment. During Operation Crossroads, only 15 percent of personnel received film-badge dosimeters, designed to measure their potential exposure to radiation. These measurements were later used to model the effects on personnel, but the secrecy of nuclear weapons testing prevented many veterans from communicating knowledge of potential exposure to their doctors. In the 1970s and 1980s, veterans began speaking out. The Department of Defense (DOD) began studying the potential exposure to radiation among the military and civilian personnel who participated in these tests. In early 1978, the DOD organized a Nuclear Test Personnel Review (NTPR) to identify DOD personnel who had taken part in atmospheric nuclear weapon tests and to determine the extent of their exposure to ionizing radiation.

Ten years later, Congress passed a bill to provide additional compensation to “atomic veterans” with specific types of cancer resulting from exposure to radiation.  In 1994, President Bill Clinton initiated an Advisory Committee on Human Radiation Experiments. The President issued a formal apology to the victims of these experiments, stating, “When the government does wrong, we have a moral responsibility to admit it.”[10]

In 1996, Congress repealed the Nuclear Radiation and Secrecy Agreement Act, removing the last barrier to the victims of these experiments to speak out without fear of reprisal.  In 1997, the International Atomic Energy Agency (IAEA) advised against any permanent resettlement of the Bikini Atoll under the present radiological conditions. The natives of Bikini Atoll remain exiles from their homeland, destroyed by radiation.

Approximately 42,000 personnel were involved in Operation Crossroads, most of them were Navy personnel. Among others present, there were personnel from the Army Air Forces, civilian scientists, press representatives, some members of Congress and other appointed observers.

Niedenthal J. “A history of the people of Bikini following nuclear weapons testing in the Marshall Islands: with recollections and views of elders of Bikini Atoll.” Health Physics 73(1):28-36.