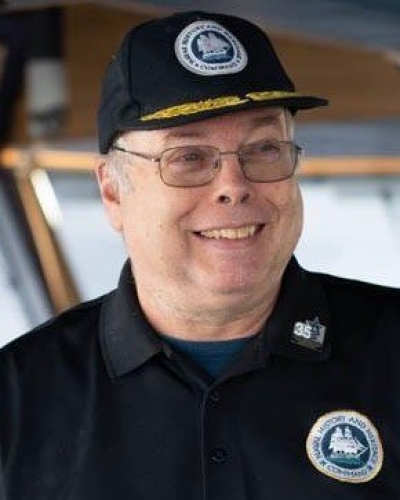 Samuel J. Cox was appointed to the Senior Executive Service on 29 December 2014 and since then has served as the 14th Director of Naval History and Curator for the Navy. As the Director of the Naval History and Heritage Command, he is responsible for the Navy’s official history programs, operational archives, Navy Department Library, and the Navy’s collection of historic artifacts, photographs, art, weapons, and display aircraft, and for the underwater archaeology program. He is also responsible for ten official U.S. Navy museums, including the historic submarine Nautilus, and for maintenance of the USS Constitution, the oldest commissioned warship afloat. As the Federal Executive Agent for the U.S. Sunken Military Craft Act, he is also responsible for more than 3,000 U.S. Navy shipwrecks and more than 14,000 aircraft wrecks.

Cox graduated from the U.S. Naval Academy, where he was awarded the Trident Scholar Prize for independent research and the History Department Prize, with distinction in 1980. He subsequently earned a master’s degree and U.S. Army designation as a Military Historian from the U.S. Army Command and General Staff College in 1993.

Following commissioning in 1980, Cox served as a squadron intelligence officer in Airborne Early Warning Squadron ONE TWO ONE (VAW-121,) deploying twice to the Mediterranean embarked on USS Dwight D. Eisenhower (CVN-69) for Lebanon and Libya crisis operations. He then served concurrently as acting Carrier Air Wing SEVEN (CVW-7) intelligence officer for northern European operations. In 1984, he was assigned to the Chief of Naval Operations Intelligence Plot (CNO-IP,) as a watch officer and CNO briefer. He then served as Deputy Director for International Programs and Assistant Operations Officer at Naval Intelligence Command, including serving as an action officer for the acquisition of a foreign threat anti-ship missile system. In 1990, he reported to the U.S. Seventh Fleet as Assistant Intelligence Officer, embarked on USS Blue Ridge (LCC-19), and took part in deployment to the Persian Gulf for Operations Desert Shield and Desert Storm, and in operations in the Western Pacific during Operation Fiery Vigil, the Mount Pinatubo eruption.

In 1993, he reported to the Atlantic Intelligence Command, where he was in charge of the theater crisis action watch for Operation Uphold Democracy, the U.S. intervention in Haiti. He then served three years as Flag Secretary for Supreme Allied Command Atlantic/Commander-in-Chief U.S. Atlantic Command. In 1998–99, he served as intelligence officer (N2) for Commander, Carrier Group EIGHT/USS Theodore Roosevelt (CVN-71) Battle Group for deployment to the Mediterranean and Persian Gulf for Allied Force (Serbia/Kosovo) combat operations (for which he was awarded a Bronze Star) and Southern Watch (Iraq) combat operations. He then served as intelligence officer (N2) for Commander, U.S. Naval Forces Central Command/U.S. Fifth Fleet, for Southern Watch, maritime interception operations, and initial Enduring Freedom combat operations in Afghanistan following the 9/11 attacks.

His tours as a captain included branch head for Future Intelligence, Surveillance, Reconnaissance and Targeting Systems (N202/N203) on the OPNAV staff. He was then selected as the first intelligence officer to serve as a Senior Fellow on the CNO Strategic Studies Group (SSG XXIII.) He then commenced a three-year tour as the Commander of the U.S. Central Command Joint Intelligence Center, supporting combat operations in Afghanistan, Iraq, and other counter-terrorism actions.

Selected for rear admiral (lower half) in 2007, he served as Director of Plans and Policy (N5)/Director of Fleet Intelligence for Navy Network Warfare Command. He was then an initial member of the Afghanistan-Pakistan Hands Program (trained to speak Dari,) then leader of the ROKS Cheonan Multinational Intelligence Investigation Task Force, followed by a tour as Director of the National Military Intelligence Center (subsequently renamed National Maritime Intelligence Integration Office.)