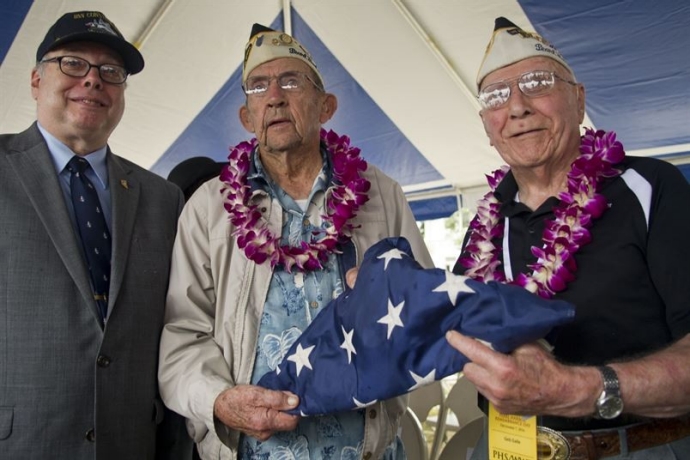 Good morning ladies and gentleman. Today is a beautiful day! (It was raining.) Because we are all alive to complain about it. It is a great honor for me to speak today. I would like to begin by paying my respects on offering my gratitude to USS Nevada Pearl Harbor survivor, Geb Galle, here with us this morning, as well as other members of the crew of Nevada who served after the attack.

As the Director of Naval History, it is now my duty to ensure that the Navy never forgets the extraordinary valor and sacrifice of the Nevada’s crew. I am humbled by the knowledge that there are some here who know a lot more about it than I do. And like just about everything about Pearl Harbor, there are numerous conflicting accounts. I rely heavily on official records, which aren’t necessarily correct either. So, if I get any of this wrong, I invite you to help me get the record straight.

You can see the conflicts right off the bat, with the casualty count. Some sources say 50 of Nevada’s crew were killed. Some say 60. Today here we honor 74, which includes those who died of their wounds, in some cases long after the attack. We will always honor those who gave their lives, but the story of the Nevada is not just about those who died. It is about the extraordinary actions and bravery of the crew of the only battleship to get underway during the attack. Today in the Navy, we say our core values are honor, courage, and commitment, with core attributes that include integrity, initiative, and toughness. Well, 75 years ago yesterday, the crew of the Nevada, through their actions, gave the Navy and the world a lesson in the true definition of what those words really mean.

In the early minutes of the attack, the Nevada had the advantage of being at the far north end of Battleship Row, and the great majority of Japanese torpedo bombers took the easier straight shot at USS Oklahoma (BB-37) and USS West Virginia (BB-48). Nevada was hit by one torpedo. Most accounts say that Nevada’s gunners shot down the plane that dropped the torpedo that hit her. (The official account by Captain Scanland, the ship’s commanding officer, says that the first plane shot down still had its torpedo when it crashed.) Regardless, the point is that Nevada’s crew responded immediately and effectively, controlling the flooding and fighting back. For Nevada, general quarters sounded at 0801, the anti-aircraft machine guns were firing by 0802, and some of the five-inch anti-aircraft batteries were firing by 0803.

Unusual for the battleships that morning, Captain Scanland was not aboard. He had spent the night ashore; the first time he had done so since the Nevada arrived at Pearl Harbor in 1940. His wife, married daughter, and baby granddaughter, none of whom he had seen in well over a year, had arrived the day before on the SS Lureline. Captain Scanland did not survive the war. Nevertheless, the initiative and skill displayed by the crew even in his absence, suggests to me extraordinary leadership by the Captain that set the conditions for superb reaction by his crew.

The more junior officers and senior enlisted aboard the ship exhibited exceptional initiative. Quartermaster Chief Sedberry (who also did not survive the war) gave the orders to engineering to prepare to get underway, before any officer had arrived on the bridge, and before Rear Admiral Isaac Kidd, the Battleship Division commander embarked on USS Arizona, gave the order for the fleet to sortie, before Kidd was killed when the Arizona exploded. The initiative of the inport Officer of the Deck, Ensign Joseph Taussig, Jr., in ordering a second boiler lit off before the attack enabled Nevada to get underway. Taussig later claimed that he had done so just to annoy the engineer, who had apparently made Taussig’s life miserable at the Naval Academy. Be that as it may, having two boilers on-line reduced the time to get underway from two hours to 35 minutes. Taussig’s account gives great credit to Sedberry for conning the ship throughout the attack, as the senior officer on board, Lieutenant Commander Thomas, focused on keeping the ship from sinking.

Numerous acts of extraordinary bravery were recorded on Nevada. Chief Boatswain Edwin Hill, by many accounts, swam from the Nevada to the pier to cast off the lines (other accounts are vague as to how he got to the pier). All accounts agree that he dove into the water to get back on board Nevada, probably leading other linehandlers in the swim. Later in the attack, he ordered his junior Sailors to shelter behind a turret while he made preparations on the forecastle to let go the anchor as the ship was being beached at Hospital Point; he was killed in the finale fusillade of bombing and strafing. Many Nevada Sailors credit Hill with their lives, and he was awarded the Medal of Honor posthumously. Warrant Officer Machinist Donald Ross repeatedly put his life at extreme risk ensuring that the Nevada retained electrical power throughout the attack, critical in enabling Nevada’s anti-aircraft guns to put up continuous and effective fire. Ross also was awarded the Medal of Honor. Ensign Taussig received the Navy Cross for his actions in directing Nevada’s anti-aircraft batteries despite a crippling wound that later resulted in a leg amputation. All told, Nevada’s crew was awarded two of the 15 Medals of Honor and 15 of 51 Navy Crosses earned at Pearl Harbor, possibly the highest for any ship in a single action, but certainly as valorous as USS California (BB-44) at Pearl Harbor and USS San Francisco (CA-38) at Guadalcanal.

In the end, Nevada was ordered by harbor control not to attempt to exit the harbor, as the moving ship attracted the attention of numerous Japanese dive bombers and fighters…five bombs hitting in quick succession. Ultimately Nevada accumulated damage from one torpedo, at least five bombs (probably six or more), multiple near-misses, and numerous strafing passes. After the Nevada was beached, with the Captain aboard, the crew fought the fires and flooding for more than 24 hours after the attack, gaining control of the fires, but the progressive flooding eventually caused the ship to settle to the bottom in shallow water. One raging fire, fueled by 20 years of files in the Captain’s administrative office, was difficult to put out. (Who says paperwork isn’t dangerous?)

By the second wave of the attack, U.S. anti-aircraft fire was so intense that it is impossible to conclusively determine which planes were shot down by which ships. Nevertheless Nevada’s anti-aircraft batteries were a major contributor to the defensive fire and possibly shot down more Japanese aircraft than any other single ship; by my unofficial count, at least three, and probably five or more aircraft (of 9 on the first wave and 20 on the second). Numerous Japanese aircraft diverted from their planned targets to attack the Nevada while she was underway. By some accounts, some of these aircraft were intended to bomb the fuel storage tanks. Regardless, the increasingly intense and accurate U.S. anti-aircraft fire on the second wave, of which Nevada’s gunners played a major role, was a major factor in Vice Admiral Nagumo’s decision not to launch a follow-on attack. By doing so, the Japanese failed to hit the fuel farm, submarine base, repair facilities and ammunition dump—all of which played a critical role in the war against Japan, and failure to destroy them was a major Japanese strategic mistake. So not only did Nevada’s gunners, who paid dearly in casualties, defend their ship at Pearl Harbor, they contributed directly to the ultimate defeat of Japan.

Unlike the USS Arizona, USS Oklahoma, and USS Utah, the Nevada’s story of heroism did not end at Pearl Harbor. She was raised, repaired, and modernized. She bombarded Japanese positions in the Aleutians. She served as the flagship for the U.S. Naval force supporting the D-Day landing at Normandy, and untold numbers of U.S. Army soldiers owed their lives to Nevada’s volume and accuracy of fire in breaking up numerous German counter-attacks. Nevada supported the landings in Southern France, successfully dueling Vichy French battleship guns firing from land-based forts.

Nevada fired so many rounds at Normandy and Southern France that she had to be re-gunned. Three big 14-inch guns, salvaged off the sunken wreck of USS Arizona, were mounted in Nevada’s turret #1, while two 14-inch guns salvaged from the sunken USS Oklahoma were mounted in turret #3, and guns that had been taken off the Nevada after Pearl Harbor and repaired, were put back on. Nevada carried the guns of Arizona and Oklahoma into action against the Japanese, bombarding positions in support of U.S. Marines on Iwo Jima and Marines and U.S. Army on Okinawa.

Nevada’s sacrifice did not end at Pearl Harbor. Over a dozen crewmen were killed by a kamikaze hit off Okinawa, and two more as a result of Japanese shore battery fire. And I neglected to mention earlier, two killed by toxic gas during Nevada’s repairs.

At the time of the attack on Pearl Harbor, Nevada was the oldest active battleship in the Pacific Fleet. Deemed expendable at the end of the war, she was painted orange and used as the bull’s-eye for the first atomic bomb test at Bikini. The first bomb missed by about a mile, which was still pretty close for a nuke, but Nevada did not sink. She survived a second atom bomb detonated underwater. The radioactive ship was then used for target practice by 16-inch battleship guns and still refused to sink. It finally took a spread of torpedoes to finally put her under. And I think a case can be made that the only reason she sank was because her extraordinary crew was not aboard to save her.

Thank you all again for attending. And thank you again to Mr. Galle and all the crew of the Nevada…your courage and sacrifice is why we all still have our freedom today. (Presented Naval History and Heritage Command coins to Mr. Galle and other veterans.)