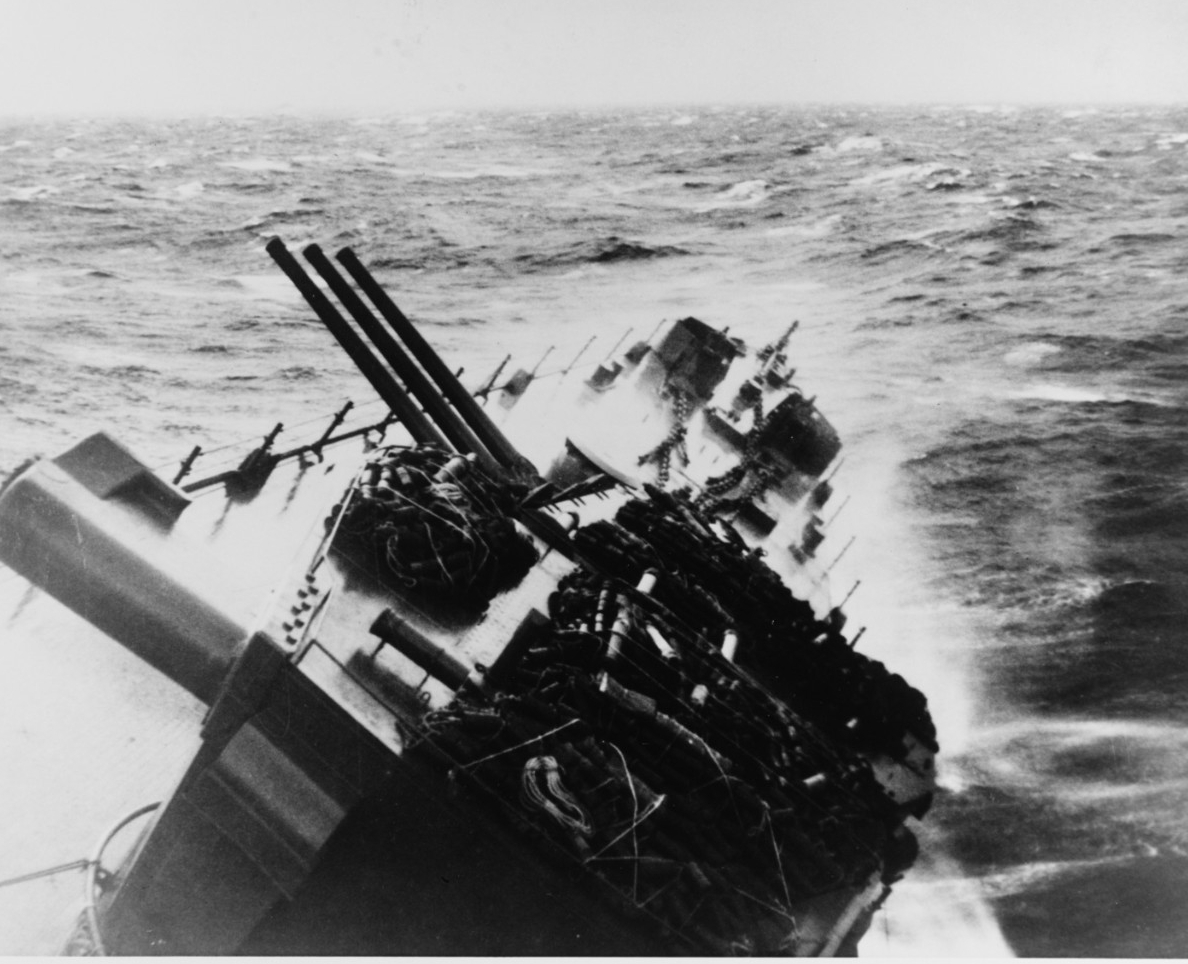 USS Santa Fe (CL-60) shown rolling about 35 degrees to starboard as she rides out a typhoon encountered in the South China Sea, probably Typhoon Cobra, 14–19 December 1944. Note that her forward 6-inch/47-caliber gun turret is trained to one side to avoid shipping water through its gun ports (80-G-700024).

On 3 November 1944, the attack by Pintado (SS-387) on the aircraft carrier Junyo was thwarted when the destroyer Akikaze sacrificed herself by intercepting the torpedo tracks and absorbing the hits. Akikaze went down with all hands, but Junyo escaped. Akikaze had previously been responsible for one of the worst atrocities committed by the Imperial Japanese Navy: the execution of 60 civilians, including priests and nuns. Junyo escaped two more attacks by U.S. submarines before finally being hit by torpedoes from a U.S. wolfpack on 9 December 1944, which she still managed to survive, although the damage put her out of action for the rest of the war.

On 17 November 1944, Spadefish sank the escort carrier Shinyo with heavy loss of life, while other submarines ravaged the Philippines-bound convoy that Shinyo had been assigned to protect. Two troop transports were sunk with the loss of over 5,500 Japanese Army personnel.

On 21 November 1944, Sealion intercepted a Japanese force including the battleships Yamato, Nagato and Kongo as they were returning to Japan after the Battle of Leyte Gulf. In a daring night surface attack in gale conditions, Sealion sank Kongo and the destroyer Urakaze. Kongo was the only Japanese battleship to be sunk by a submarine and the last battleship in any navy to be sunk by submarine.

On 29 November 1944, Archerfish intercepted and sank the newly constructed aircraft carrier Shinano (converted from a Yamato-class battleship hull) within hours of her leaving the building yards at Yokosuka. Shinano was the largest warship ever sunk by a submarine.

On 19 December 1944, Redfish sank the new carrier Unryu, which was on a mission to deliver Ohka rocket-propelled suicide planes to the Philippines to oppose U.S. landings on Luzon. Redfish then survived an incredible depth-charge beating that put her out of action for the rest of the war.

On 18 December 1944, elements of the U.S. Third Fleet under Admiral William F. Halsey, Jr., were caught with very little warning in a typhoon off the eastern Philippines at a critical time when many ships were low on fuel due to the high combat operating tempo. Three destroyers were sunk in the typhoon, Spence (DD-512), Monaghan (DD-354), and Hull (DD-350), with almost their entire crews. Many other ships were badly battered, including the light carrier Monterey (CVL-26) , which suffered a  serious fire (future President Gerald R. Ford was the officer-of-the-deck).

About 790 crewmen were killed across the entire force, including 775 aboard the three sunken destroyers, making this incident the worst loss of life aboard U.S. Navy ships in a single natural disaster. (The second worst was when the frigate Insurgent, with a crew of 340, and the brig Pickering, with a crew of 105, were both lost with all hands after leaving the U.S. East Coast in August 1800. Both vessels were probably sunk in a Caribbean storm the following month, although the whereabouts of wrecks remain unknown.)  The subsequent court of inquiry found Admiral Halsey responsible, but not negligent, for the loss and damage to the fleet. (In the years afterward, Halsey would be heavily criticized.)

On 20 November 1944, a Japanese Kaiten manned suicide torpedo slipped into the major U.S. Navy forward operating base at Ulithi atoll, sinking the heavily laden oiler Mississinewa. This was the first of ten major Japanese Kaiten operations in which modified conventional submarines piggybacked the weapons to their destination, and it was one of the few Kaiten successes. Before the end of the war, Japan would lose more than 100 Kaiten (and their pilots) and eight mother submarines (with over 800 crewmen), in exchange for sinking Mississinewa, the destroyer escort Underhill (DD-682) at the very end of the war, and an LCI (landing craft, infantry).

On 10 November 1944 at Seeadler Harbor, Admiralty Islands, the new ammunition ship Mount Hood (AE-11) was obliterated in a massive explosion of her own cargo, which killed every one of the more than 300 crewmen on the ship (no remains of the crew were found) and killing over 80 men on the repair ship Mindanao (ARG-3), anchored 350 yards away. A major staging area for operations in Leyte and for impending operations against Luzon, numerous other small craft in Seeadler Harbor were sunk and other ships damaged, including escort carriers, a destroyer, and destroyer escorts. Although the court of inquiry was unable conclusively to determine the cause of the blast (other than that it was not caused by enemy action), numerous serious safety violations aboard the ship were identified. Information about these violations was not widely disseminated until after another ammunition ship blew up off Guadalcanal in January 1945.

“The Worst Christmas Story Ever”: The Sinking of SS Leopoldville on 24 December 1944

The surprise German counteroffensive that commenced 16 December 1944 (which became known as the Battle of the Bulge, costing over 19,000 U.S. lives, making it the bloodiest battle of the entire war for the United States) provoked a mad scramble to send reinforcements forward to counter the German advance. Elements of the U.S. 66th Infantry Division (2,235 men) were hastily loaded aboard the Belgian troopship SS Leopoldville in Southampton, England, on 24 December 1944. They were destined for Cherbourg, France, to replace the 94th Infantry Division, which had been sent forward to the battle. The voyage was a debacle from the beginning as loading had been haphazard and resulted in a complete breakdown of unit integrity and chain of command. The soldiers were given virtually no instruction for abandoning ship or in the proper use of survival gear. (SS Leopoldville had successfully transported over 120,000 Allied soldiers on previous trips. Since the D-Day landings in June, hundreds of thousands of Allied troops had crossed the English Channel without being attacked.)

When SS Leopoldville was within 5.5 miles of her destination, she was hit by one torpedo from the German snorkel-equipped submarine U-486, conducting her first war patrol. SS Leopoldville actually took over two hours to sink, but rescue was delayed by bungled communication, language misunderstandings, badly executed abandon-ship procedures, and the early abandonment by the ship’s crew (although the captain went down with the ship). It should be noted that the U.S. troops remained calm and disciplined throughout, possibly not realizing the extreme danger they were in until it was too late. Another unfortunate key factor was that many potential responding headquarters and rescue forces were undermanned and not ready due to Christmas Eve celebrations ashore.

One of the British escort ships, HMS Brilliant, came alongside and rescued about 500 soldiers, while the other escorts pursued the submarine. The U.S. tug ATR-3 reached SS Leopoldville from Cherbourg in time to rescue 69 soldiers, and PC-564 and PT-461 also contributed to the rescue of a further 1,400 U.S. soldiers. In the end 763 U.S. soldiers perished, some killed by the improper use of lifejackets (which broke their necks when the men jumped in the water), and about 300 as a result of the torpedo hit, but most of the rest died of hypothermia in the water as they awaited rescue. These deaths are not counted in the Battle of the Bulge totals, and the SS Leopold disaster was long overshadowed by other Battle of the Bulge events, such as the massacre of U.S. prisoners of war at Malmedy, Belgium. At any rate, this holiday season, it would be appropriate to remember the brave U.S. Army soldiers who didn’t have a chance in the frigid winter waters of the English Channel.