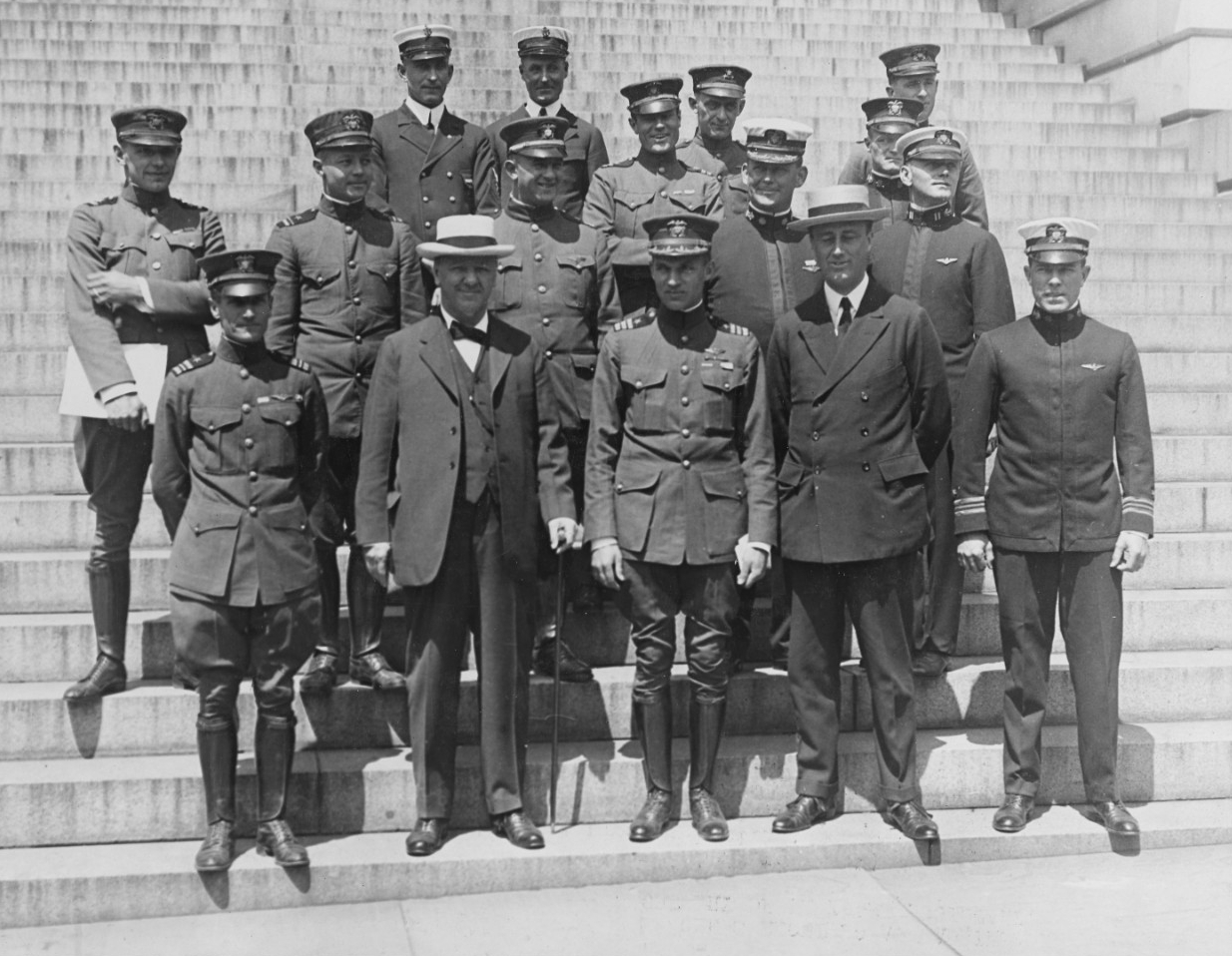 The development of larger and faster flying boats, with increased range, endurance, and load-carrying capability, had accelerated dramatically during World War I. The flying boats were particularly useful in an anti-submarine warfare role. Although few, if any, German U-boats were sunk as a result of air attack, the flying boats were very successful at preventing U-boats from attacking convoys by forcing them to dive. The U-boats’ slow submerged speed would facilitate a convoy’s escape. By the end of World War I, convoys that were protected by air cover provided by flying boats rarely suffered loss to U-boats.

The Curtiss Aeroplane and Motor Company “NC” (Navy-Curtiss) flying boats were the product of the evolutionary (or even revolutionary) development of the flying boat during World War I. Known at the time as “Nancy Boats,” the NC’s were built in response to U.S. Navy requirements for a long-range anti-submarine aircraft capable of crossing the Atlantic without having to be disassembled and put on a ship potentially vulnerable to U-boat attack. (These requirements were devised by a team led by Rear Admiral David W. Taylor, then chief of the Navy Bureau of Construction and Repair.) The NC was the largest U.S.-designed flying boat to that point, equipped with wireless radio and sleeping compartment. Originally powered by three engines, early test flights indicated this was insufficient and young aviator Marc “Pete” Mitscher (Naval Aviator No. 33) recommended the NC be modified with addition of a fourth engine (with the additional engine added on the centerline in a “pusher” configuration). The NC aircraft had a maximum speed of 74 knots, a maximum range of about 1,500 miles, and endurance of about 15 hours. Ultimately ten NC’s would be built.

NC-1 made its first test flight on 4 October 1918, just before the end of the war. In an event that would cause today’s operational risk management adherents to go white as a sheet, 51 people crammed aboard NC-1 for a test flight on 25 November, which set some sort of world record. NC-2 was damaged during testing and was subsequently cannibalized for parts (some things never change) after a fire damaged NC-1 and NC-4. Actually, the entire transatlantic flight was a highly risky operation. The flight was conceived, planned, and led by Commander John H. Towers, who was designated as Commander of Seaplane Division 1. Towers (Naval Aviator No. 3) was arguably the most vociferous early advocate of naval aviation. The flight had initially been planned during the war, but the war ended before it could be executed. Nevertheless, Towers persisted in gaining approval of the operation as a means to demonstrate capability to skeptical senior leadership of the U.S. Navy. The orders to execute the mission were signed by Assistant Secretary of the Navy Franklin Delano Roosevelt, future U.S. President, and apparently “Acting” Secretary of the Navy at the time. (Towers had barely survived a flight incident over the Chesapeake in 1913 in which Ensign W. D. Billingsley was thrown from the plane and killed, leading Towers to insist on the inclusion of safety belts in naval aircraft—from which the modern seat belts in autos are derived. Towers would also become the first Naval Aviator to achieve flag rank.)

By May of 1919, the U.S. Navy had three operational NC flying boats, with NC-4 making her first test flight on 30 April 1919 (and her only flight before the transatlantic attempt.) The transatlantic mission was a major affair, with over 50 U.S. Navy ships, mostly destroyers, assigned to take station along the intended flight route to provide beacon services and rescue services if necessary. The minelaying vessel USS Aroostook was converted to a seaplane tender to assist the flight (Aroostook had laid 3,180 mines as part of the North Sea Mine Barrage in 1918).

On 8 May 1919, three NC flying boats (NC-1, NC-3, and NC-4) launched from Naval Air Station Rockaway, New York, under the overall command of Towers, the squadron commander, flying in NC-3. Lieutenant Commander Mitscher was originally in command of NC-2, but after her cannibalization flew as a pilot in NC-1. The three aircraft first flew to Chatham Naval Air Station, Massachusetts. NC-4 suffered mechanical problems (oil leak in the pusher engine and thrown rod in the center tractor engine) and wound up forced to land in the open ocean 80 nautical miles from Chatham, but was located and towed in, and fortunately remained airworthy.

The three aircraft then launched for Trepassy, Newfoundland, but NC-4 again encountered mechanical problems and had to make an intermediate stop at Halifax, Nova Scotia, for repair, before continuing on to Trepassy. Aroostook was waiting at Trepassy and provided fuel, lubrication, maintenance, and repair work. In the meantime, NC-1 and NC-3 had attempted to take off from Trepassy to continue the next leg to the Azores, but were unable to get airborne as they were actually overloaded with too much fuel (the tanks measured differently when ashore at Rockaway than when the planes were sitting in the water at Trepassy, and it was the flight engineer on NC-4 that ultimately diagnosed the problem).

On 16 May 1919, all three NC’s attempted to take off from Newfoundland for the Azores, the longest leg of the journey at 1,200 miles, which would take about 15 hours. NC-4 got airborne, but, once again, NC-1 and NC-3 could not, and NC-4 had to return. After more weight and balance shifting, all three aircraft finally got off after 1800. Twenty-two Navy ships were stationed along the route at about 50-nautical-mile intervals, and were lit up at night, with searchlights pointed up and firing pyrotechnics to assist the NC’s during the night portion of the transit. The three planes initially flew in formation, but, as night fell, it was discovered that only NC-4’s running lights worked, so Towers ordered the formation to disperse to decrease the risk of collision.

The following day, the NC’s encountered fog banks that made the flight very dangerous as it became difficult to discern the horizon and maintain level flight. Although the NC’s were equipped with the new “bubble” sextant (which provided an artificial horizon and enabled astronomical fixes from aircraft) and the new drift indicator, the NC’s were effectively lost due to the fog. As it became too hazardous to fly, NC-1 and NC-3 were both forced to set down in the open ocean, each incurring damage that made further flight impossible. The crew of NC-1 was picked up by the Greek freighter Ionia, which tried to take NC-1 in tow, but the lines parted. The destroyer USS Gridley (Destroyer No. 92) arrived and took NC-1 in tow, but, after three days, NC-1 broke apart and sank. NC-3 drifted for 200 miles over 52 hours with her wireless inoperative until she came in sight of one of the Azores Islands and then taxied until she finally met up with a destroyer and was taken in tow (some reports say NC-3 taxied the whole way without assistance). NC-3 was, however, no longer air worthy.

NC-4, under the command of Lieutenant Commander Albert Cushing Read, actually went into a spin in the fog that was initially unrecognized, and only a brief glimpse of the sun alerted the crew to impending disaster. Pulling the big plane out of the spin with no spatial reference was considered an exceptional feat of flying skill by the NC-4 pilots, Lieutenant Junior Grade Walter Hinton and U.S. Coast Guard pilot Lieutenant Elmer Fowler Stone (Coast Guard Aviator No. 1 and Naval Aviator No. 38). NC-4 reached the Azores on the afternoon of 17 May, although she set down at an alternate landing site (Horta), where she was tended by the cruiser USS Columbia (Cruiser No. 12.)

On 20 May, NC-4 took off for Lisbon, but had to turn back after about 150 nautical miles due to mechanical problems. The efforts of the flight engineers, Lieutenant James L. Breese and Chief Machinist’s Mate Eugene S. Rhoads, were critical in getting NC-4 across the Atlantic. (Rhoads had actually been a replacement after the primary lost his hand in a prop accident.) After receiving repairs and spare parts, NC-4 took off again on 27 May, flying over 13 U.S. Navy station ships before landing on the Tagus River at Lisbon at 2001 after a flight of 9 hours and 43 minutes, thus becoming the first aircraft to fly across the Atlantic. Although the flight from Newfoundland to Lisbon took 10 days and 22 hours, actual flight time was 26 hours and 46 minutes. (In the meantime, the first attempt by the British to make a non-stop flight from Newfoundland to Great Britain had crashed a few hundred miles east of Newfoundland, with the two-man crew picked up by a steamer.)

On 31 May, NC-4 flew from Lisbon to Plymouth, England, but again had mechanical problems and had to make two intermediate stops including an overnight at Ferrol, Spain, before finally arriving at Plymouth and becoming the first aircraft to fly from the United States to England. NC-4 was met by a large escort of Royal Air Force aircraft, a 21-gun salute from a British warship, and huge crowds. There was great public and press interest in the flight and the crew, although this would be eclipsed two weeks later when two British aviators (Alcock and Brown) flew non-stop from Newfoundland to Ireland, making the first non-stop transatlantic flight, albeit with a crash landing at the end.

After arriving at Plymouth, the crew of NC-4 met up with the crews of NC-1 and NC-3 for a spectacular royal welcome in London, receiving decorations from the King, and then in Paris, where they met with President Woodrow Wilson, who was negotiating the Versailles Treaty and pushing his League of Nations proposal. NC-4 was dismantled at Plymouth and shipped back to the States on Aroostook. The three crews returned to the U.S. aboard the USS Zeppelin (a German ocean liner being used as a troop transport by the Allies, repatriating 15,800 U.S. troops after the war in two voyages). Upon return to the United States, the crews embarked on a goodwill tour of the U.S. East and Gulf Coasts.

Lieutenant Commander Read (Naval Aviator No. 24), the flight commander of NC-4, was awarded the Navy Distinguished Service Medal (at that time, the second- highest award, ahead of the Navy Cross) for the flight. NC-4 pilots Hinton and Stone, flight engineers Breese and Rhoads, and radioman Ensign Herbert C. Rodd were awarded the Navy Cross (LCDR Rodd would die in an air crash in 1932). Towers also was awarded the Navy Cross for leading the mission, and Mitscher was also awarded a Navy Cross, having been at the controls of NC-1 when she ditched. In 1929, the U.S. Congress awarded, and President Herbert Hoover presented, Congressional Gold Medals to the six crewmen of NC-4 and to Towers for “conceiving, organizing, and commanding” the mission.

Primary source document is out-of-print monograph “The First Flight Across the Atlantic” by Commander Ted Wilber, published by the NC-4 50th Anniversary Committee in 1969, which can be found on the NHHC website. With the 100th anniversary, there are numerous articles on line, most of which adhere to the Wikipedia account, which is mostly accurate, albeit incomplete. A particularly good and thorough article is USCG Aviation History “1919 NC-4 Transatlantic Flight” found at cgaviationhistory.org, with no specific author I could find.

Back to H-Gram 030 Overview