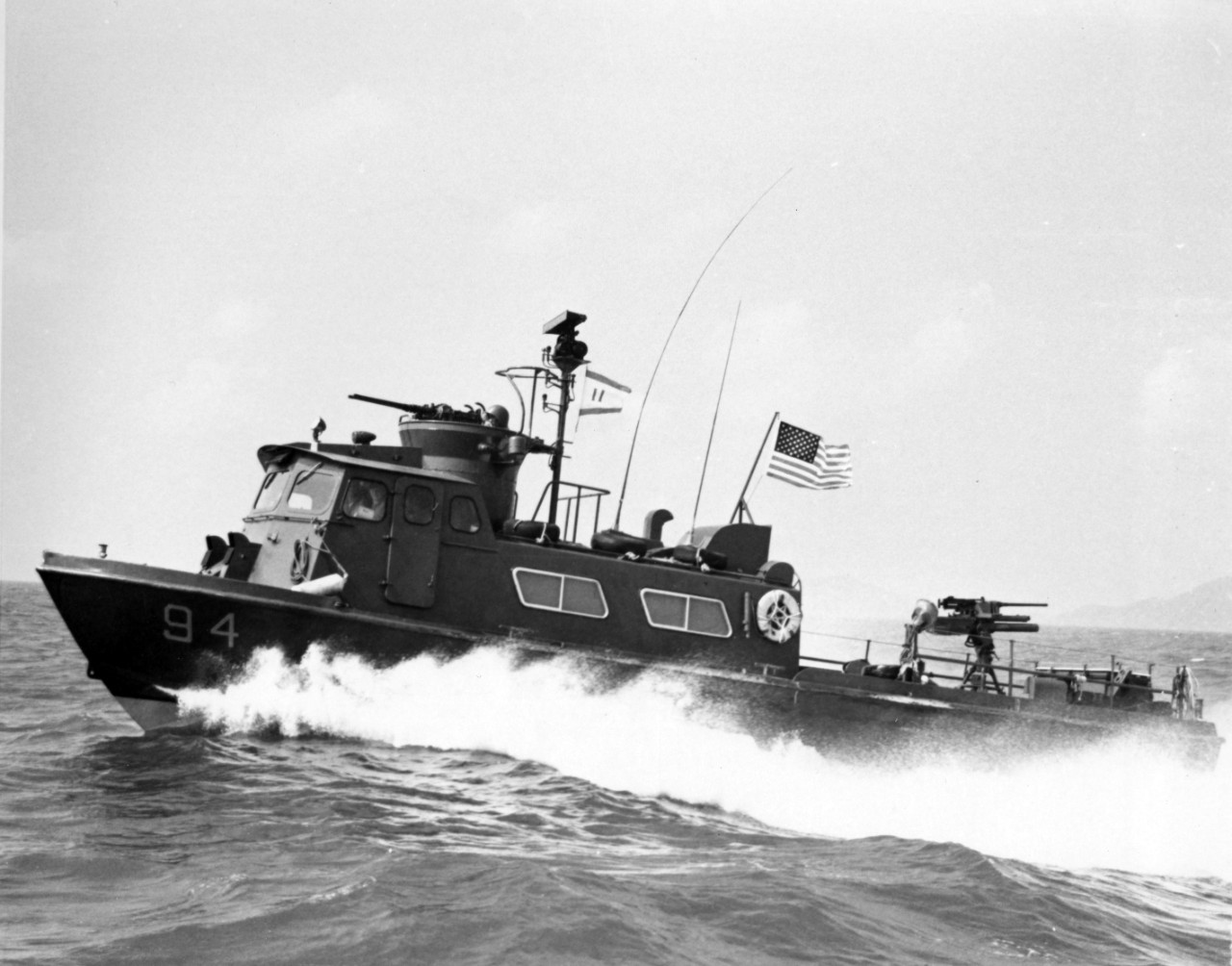 A U.S. Navy fast coastal patrol boat (PCF-94) cuts through the water of the Gulf of Thailand on a patrol along the coast to prevent the infiltration of Viet Cong and their supplies by sea, March 1968 (USN 1130649).

PCF-19 was one of four Swift boats lost in combat during the Vietnam War (seven more were lost to heavy seas or severe weather, some after being transferred to the South Vietnamese navy). PCF-4 was destroyed by a command-detonated mine in February 1966 (four killed, two wounded). PCF-41 was damaged by heavy shore fire and a mine in May 1966 and abandoned (one killed, others wounded) and later deemed unsalvageable. In April 1969, PCF-43 came under recoilless-rifle and rocket fire, and was beached and burned when a cargo of explosives detonated (four killed). However, what sank PCF-19 remained lost in the fog of war for many years, although the initial court of inquiry assessed that it was the result of friendly fire from U.S. Air Force aircraft.

After President Johnson unilaterally called a halt to U.S. bombing north of the 19th parallel on 31 March 1968, U.S. Navy aircraft from carriers on Yankee Station in the Gulf of Tonkin and U.S. Air Force aircraft from bases in Thailand and South Vietnam continued to strike targets in North Vietnam, north of the demilitarized zone (DMZ) between the 17th and 19th parallels. The result was a lot of aircraft crowded into a relatively confined area, with what some senior commanders at the time assessed as inadequate command and control. The North Vietnamese responded to the partial bombing halt (and “good will” gesture) by pulling surface-to-air missile batteries from the heavily defended Hanoi and Haiphong areas and moving them into the confined space where U.S. aircraft were still conducting strikes, making the southern part of North Vietnam even more dangerous.

Throughout the spring of 1968, U.S. Marine Corps and other observers reported hovering lights at night flying just north of the DMZ and even out over water between North Vietnam and Tiger Island (which was held by the North Vietnamese). In typical American black-humor fashion, these contacts were frequently referred to as “UFOs.” Although the lights were presumed to be helicopters, daylight reconnaissance missions could find no trace of helicopters in the vicinity of the DMZ or on or near Tiger Island, nor was there any other intelligence indicative of North Vietnamese helicopter operations in that area, not to mention the obvious question: Why would they have their lights on? Various theories, such as thermal ducting, were postulated to try to explain why hovering lights could plainly be seen, but no helicopters could be found. At the time, North Vietnam had Soviet-supplied MI-4 Hound helicopters that could be equipped with rockets and machine guns, but they were used almost exclusively for urgent resupply missions along the Ho Chi Minh trail in Laos. Some sources erroneously call them Hind helicopters, but that Soviet attack helicopter was still in development at the time. (I could find no reports of North Vietnamese helicopter attacks, other than the PCF-19 incident, although I can’t say I exhausted every possible source.)

PCF-19 was definitely hit by something shortly after midnight on the night of 15/16 June 1968, and it was sudden, catastrophic, and a surprise. The U.S. Coast Guard Cutter Point Dume reported seeing PCF-19 hit by two rockets from an unidentified source, and several hours later came under fire herself from an unidentified aircraft (the Wikipedia entry for Point Dume conflates this incident with the attack of the following night on HMAS Hobart (D-39) and USS Boston (CAG-1), as do other sources, and as did the court of inquiry.) Point Dume pulled two badly wounded survivors from PCF-19 from the water. The explosion and rapid sinking of of the Swift boat was also reported by the naval gunfire liaison officer at Alpha One, an observation post at the DMZ.

PCF-12, under the command of Lieutenant Junior Grade Pete Snyder, responded to the attack on PCF-19, and the eye-witness accounts of the crew of PCF-12 are remarkably clear that they were fired on by a helicopter (which was subsequently identified as matching the characteristics of an MI-4 Hound). PCF-12 also reported returning fire, and hitting and possibly downing the helicopter (although no wreckage or parts of the helicopter were found during searches the next day). While searching for survivors of PCF-19, PCF-12 was lit up by four amber-colored illumination rounds directly overhead that did not come from Point Dume, which had already departed with the two survivors. At this point, PCF-12 sighted two aircraft hovering off both port and starboard beams. Radio requests from PCF-12 to U.S. authorities ashore to verify the identity of the two aircraft confirmed that there were no friendlies in the area, and that the shore observation post had both radar and night scope contact on the unidentified aircraft, and that they were not squawking IFF. (Of note, the PCFs didn’t have IFF either.) PCF-12 turned to put the two helicopters on the bow and stern, at which point one of the helicopters opened fire with machine guns with tracer rounds. In the running gun battle that followed, PCF-12 returned fire with .50-caliber machine guns, radioing that it was under attack by unidentified aircraft. Gunners on PCF-12 reported hitting one helicopter and hearing it splash in the water, at which point the other helicopter broke contact. Later, as Point Dume returned to the scene, PCF-12 observed her firing tracers at blinking lights in her vicinity.

With daylight on 16 June, and continuing to 18 June, U.S. Navy divers from USS Acme (MSO-508) surveyed the wreck and initially recovered three bodies, which were later identified as two U.S. and one Vietnamese. Years later, in 2001, a third U.S. body was recovered on another dive. PCF-19 was resting right side up on the bottom, with damage consistent with being hit by two rockets, with two entry holes in the forward berthing compartment and no exit holes. Three U.S. crewmen in the compartment were killed, and the South Vietnamese liaison was killed in the main compartment. The skipper and two other sailors topside were blown off the boat into the water. The skipper was blinded and all were severely wounded. One was Bowman, who apparently died in the water; his body was never found. GMG2 John R. Anderegg would be awarded a Silver Star for his actions in saving his skipper and trying to save Bowman. Those lost were GMG2 Billy S. Armstrong, QM2 Frank Bowman, BM2 Anthony Chandler, EN2 Edward Cruz, and Bui Quang Thi, the South Vietnamese liaison.

On the night of 16/17 June, HMAS Hobart was operating with the USS Boston, USS Edson (DD-946) and USS Theodore E. Chandler (DD-717) off the coast of North Vietnam in the vicinity of Tiger Island. Hobart was on her second of three Vietnam deployments in support of U.S. and allied forces, and was an Australian version of a Charles F. Adams–class guided missile destroyer. The ships had been conducting shore bombardments of the North Vietnamese coast as part of Operation Sea Dragon and had been fired upon unsuccessfully by enemy shore batteries in the previous days. They were operating near Tiger Island to investigate the reports of North Vietnamese helicopter activity the night before.

At 0309 on 17 June, Hobart tracked an incoming aircraft that had no IFF transponder active, but did not open fire. At 0314, the aircraft fired a missile that hit Hobart, killing one sailor and wounding two others, and damaging the chief petty officer’s mess, air search radar and missile control compartments, and the funnels. Two minutes later, the same aircraft attacked again and fired two missiles, which hit simultaneously. Although one missile did not detonate, it penetrated the superstructure and caused damage. The other missile hit in the same area as the first, causing considerable damage in the vicinity of the Ikara missile magazine, and killing another sailor and wounding six more. As Hobart was not carrying any Ikaras (an anti-submarine weapon), there was no risk of the resulting fire detonating the magazine. The aircraft then made a third pass, and Hobart opened fire with her forward 5-inch/54-caliber gun mount under local control, firing five rounds that caused the plane to break off. A total of two Australian sailors were killed and 11 were wounded. (Accounts of the Hobart incident also confuse the timing of the PCF-19 attack.)

Also after midnight on the night of 16/17 June, USS Boston (CA-69) came under attack and was damaged by shrapnel from near-misses by air-launched missiles and automatic-weapons fire—many accounts also conflate this with the attack on PCF-19 the night before. (For the purists, Boston was converted to a missile cruiser in 1952 and reclassified from CA-69 to CAG-1, but in May 1968 was reclassified back to CA-69—although she was still a missile cruiser…. I am sure this is perfectly clear!)

Following the attacks on the Hobart and Boston, the commander of the U.S. Seventh Fleet, Vice Admiral William F. Bringle, initiated an investigation. Aided by missile components that were definitely from U.S. air-to-air Sparrow missiles, the inquiry concluded that the ships had been attacked by mistake by U.S. Air Force F-4 Phantoms. This was correct, but based on the confusing timelines, and since there was no other evidence of enemy helicopter activity (except for the eyewitness accounts), the inquiry also concluded that PCF-19 had been hit by friendly fire from U.S. aircraft. Thus, the pilots and RIOs of two USAF F-4 Phantoms that reacted to the reports of helo activity got the blame. The upside was that both the U.S. Navy and U.S. Air Force took immediate corrective steps to resolve command, control, and coordination issues identified in the inquiry, and no other similar attacks occurred.

(Sources include NHHC Dictionary of American Fighting Ships [DANFS] entries for individual ships involved, and “Swift Boat Down: The Real Story of the Sinking of PCF-19,” 2006, by ENC [Ret.] Jim Steffes —who was on PCF-12—which I found to be very well-researched.)

Back to H-Gram 019 Overview