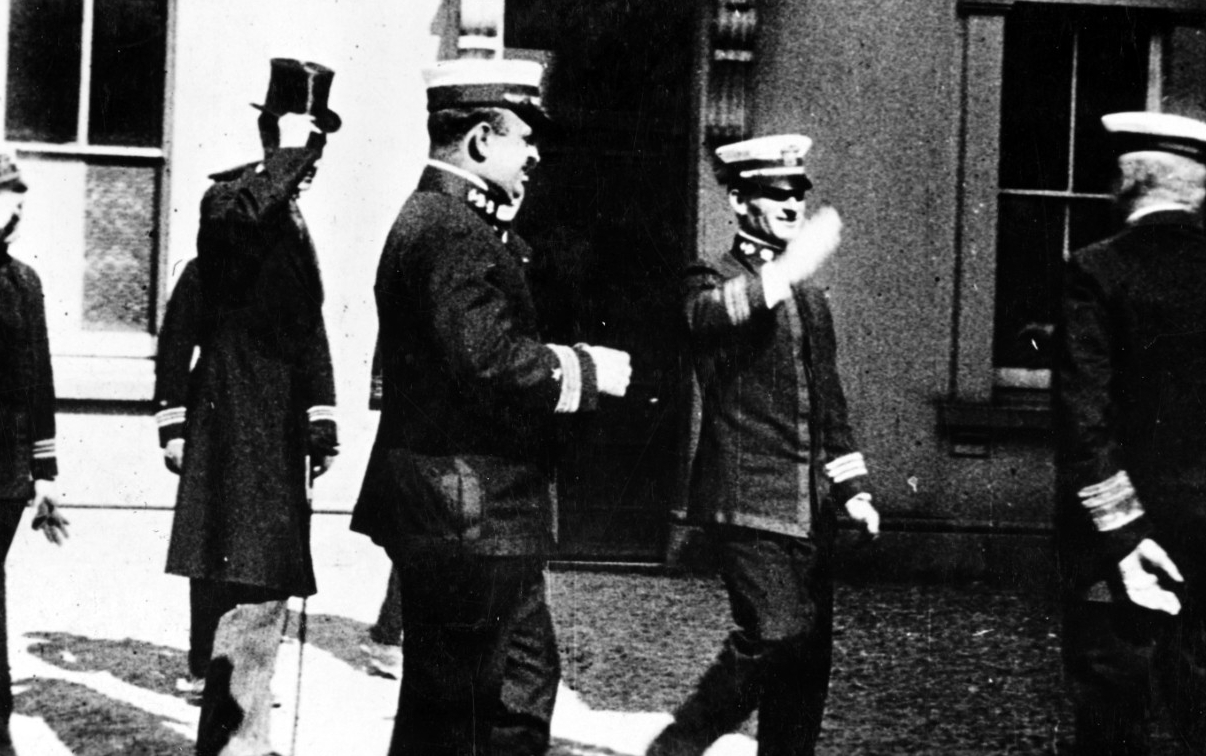 Actually, despite what my 1976 Naval Academy Reef Points says, Lieutenant Commander Joe Taussig, USN, never said it, at least according to his own diary. Taussig led the first contingent of six U.S. Navy destroyers to Europe after the U.S. declaration of war against Germany, arriving in Queenstown, Ireland (Ireland was not yet independent from Britain) on 4 May 1917 to assist the British in protecting merchant shipping then being sunk by German U-boats at an alarming rate in the Western Approaches. In response to the British Commander-in-Chief of the Western Approaches, Vice Admiral Sir Lewis Bayly’s question about when the newly arrived U.S. destroyers would be ready to commence operations, Taussig replied something like “as soon as we can get to the fuel pier” according to Taussig’s recollection. This exchange was initially reported in U.S. newspapers as “We can start at once” and in British newspapers as “We are ready now” resulting in a big boost to British morale at a very dark time. The “We are ready now” quote was then widely reported in the U.S., and used unabashedly by the U.S. Navy as a public relations and recruiting rallying cry, and became the most famous U.S. Navy quote of the war. What Taussig did actually say, on the record before Congress several years later, was that “the Navy was far from being ready for war,” a (arguably true) statement that made him a lifelong enemy of the then-Assistant Secretary of the Navy (and future President) Franklin D. Roosevelt.

As a result of the German’s resumption of unrestricted submarine warfare, the United States declared war on Germany (but not German allies, the Austro-Hungarian Empire, Ottoman Empire, or Bulgaria) on 6 April 1917. This set off a scramble between the U.S. Army and U.S. Navy, neither of which was really ready to go to war. Although a major naval buildup had been authorized by Congress in 1916 at the request of President Woodrow Wilson, none of those new ships were completed (or in most cases even begun) before the outbreak of war. Nevertheless, the U.S. Navy was one of the largest and best-equipped navies in the world, but its most recent combat experience against an enemy fleet was in the Spanish-American War of 1898 (which actually wasn’t much of a contest), although there had been some minor combat actions related to the Philippine Insurrection and U.S. intervention in Mexico, particularly at Vera Cruz in 1914 (these of course, weren’t minor for those involved.)

In anticipation of an imminent outbreak of war, the President of the Naval War College, newly promoted Rear Admiral William S. Sims, was ordered by Secretary of the Navy Josephus Daniels to travel incognito (leaving uniforms behind) to Great Britain to serve as a discrete liaison officer with the British Admiralty. (The "incognito" thing didn’t work; Sims was recognized by the U.S. Navy gun crew that had recently been provided to the U.S. merchant ship SS New York for defense against U-boats). When receiving his orders from CNO William Benson, Sims later said that Benson told him not to get too close to the British, since “we would just as soon fight them [the British] as the Germans.” Although Benson later denied he said that, at least one other witness said he did, and there certainly had been no love lost between the U.S. and the Royal Navy since the Revolution and the War of 1812. In the early days of World War I, U.S. anger was often directed as much toward the British blockade of Germany, which interfered with U.S. trade, as toward German actions. Sims had actually been reprimanded, and relieved of command, in 1910 for publically expressing strong pro-British sympathies. He was, in fact, very pro-British, and was a close friend of First Sea Lord Admiral Sir John Jellicoe, senior officer in the British Navy in 1917, since both had served closely together in the Boxer Rebellion in China in 1900, where both had been wounded (as had Taussig for that matter,) during the international expedition to rescue besieged Western embassy personnel in the Chinese capital.

War was declared shortly before Sims arrived in England (after the SS New York hit a mine, but did not sink), so all pretenses were immediately dropped.  The British were eager to let bygones be bygones, and Sims’ special relationship with Jellicoe was an added bonus, so Sims was immediately brought into the Royal Navy’s inner circle and given access to the Royal Navy’s most sensitive intelligence. There Sims learned that the situation was far more desperate than was publically known, especially in the United States, as the German U-boats were now far more effective than they had been during the first attempt at unrestricted submarine warfare in 1915 (which resulted in, among other things, the loss of the liner Lusitania with 1,198 civilians, including 128 of 139 Americans citizens on board, and a huge diplomatic outcry that ended in Germany suspending its policy). To stay ahead of the Germans during the hugely expensive pre-war naval arms race, the British had concentrated on building battleships, and now were desperately short of destroyers, which were needed to escort convoys, which the British were coming to believe would be the only way to keep an excessive number of merchant ships from being sunk by U-boats and prevent possible resulting starvation in the United Kingdom.

Sims sent back word to Washington that what the British needed most was not the U.S. battle fleet, but as many destroyers as we could send as fast as we could send them. On 13 April, LCDR Joseph Taussig, commander of Destroyer Division Eight, on his flagship USS Wadsworth (DD-60), received orders to depart what was then known as “Base 2” (Yorktown, Virginia) with his destroyers and proceed immediately on 14 April to New York, which he did, only to find the Navy Yard’s piers closed for the weekend. Taussig’s diary is a hoot. Anyone who has made a short-notice deployment will recognize all the hurry-up-and-wait, contradictory directions, uncertainty, scramble for gear, shortage of people, family issues, etc., and reach the historic lesson that “some things never change.” (Taussig was notified on 25 May 1917 that he had been promoted to Commander backdated to 29 August 1916. However, Taussig had already “self-promoted” himself during the transit and was wearing commander's rank when he arrived in Queenstown. Those were the days…)

DESDIV 8, consisting of Wadsworth (DD-60), Porter (DD-59), Davis (DD-65), Conyngham (DD-58), McDougal (DD-54), and Wainwright (DD-62)—the order they appear in the famous painting "Return of the Mayflower"—departed from Boston on 24 April for the first trans-Atlantic crossing by U.S. destroyers since a previous squadron transited via the Mediterranean in 1905 to be stationed in the Philippines (one of which was run aground in that archipelago by Ensign Chester Nimitz, but that is another story.) After a slow transit due to weather conditions, mechanical breakdowns, and the need to conserve fuel, DESDIV 8 arrived in Queenstown (now Cobh, Ireland) on 4 May 1917, representing the first U.S. combat forces to arrive in the European Theater during World War I. (American pilots had already been flying combat missions as part of the Lafayette Escadrille—originally Escadrille Americaine—but they were wearing French uniforms, under French command, in a French unit, although the Germans were not amused and claimed it was a violation of U.S. neutrality.) The arrival of the U.S. destroyers received enormous attention from the British press and was a huge boost to British morale.

Taussig’s  destroyers did commence operations very quickly, after a crash course in Royal Navy communications, security, and operating procedures, and were integrated into the Royal Navy command structure, the first time U.S. Navy ships had ever operated under foreign command. At one point, Rear Admiral Sims temporarily relieved the British commander of the Western Approaches, the first time an American admiral had exercised command of foreign ships.

The U.S. Navy quickly realized that sending destroyers across the Atlantic without refueling, arriving in the U.K. almost empty, was a bad idea. So the Fleet Engineer on the staff of the U.S. Atlantic Fleet, newly promoted Commander Ernest J. King, went up to Boston and met with the executive officer of the new oiler USS Maumee (AO-2), Lieutenant Commander Chester Nimitz (the CO was off the ship), and the two of them figured out a way to refuel destroyers underway from the Maumee and then rigged the ship to do so. (NAVSEA was nowhere to be found, yet.) The Royal Navy had previously experimented with underway replenishment with coal, but those efforts largely failed and were abandoned. The use of oil for fuel made the idea more practical, but the U.S. Navy was the first to do it. The Maumee successfully refueled the second squadron of U.S. destroyers midway across the Atlantic, using the newly devised alongside method, as well as subsequent squadrons in May and June. As anyone in the Navy should know, underway refueling (and later, replenishment) was a profound revolution in naval warfare that cannot be overstated. In the early days of World War II, the U.S. Navy still wasn’t very good at underway refueling, especially in rougher seas, but we were far better than any other navy, including the Japanese (even the Soviet Navy continued to use a less-efficient bow-to-stern method into the 1980’s.)

Another U.S. technological innovation that would have profound effect on World War I was the use of new radio-telephones (significantly better than what the British had developed to that point.) The CW936 first went to sea in January 1917, and over 1,000 were produced and used on destroyers and sub-chasers. The use of voice communications, via radio-telephone (although vulnerable to German interception, which was why the British were slower to develop it,) significantly improved the ability of convey escorts to rapidly react to U-boat sightings and coordinate attacks, thereby making convoys far more effective in minimizing losses to U-boats. I will describe the World War I U-boat war in greater detail in future H-grams, but the key point is that of the approximately two million U.S. troops that were shipped across the Atlantic to Europe in 1917 and 1918, none were lost in convoys escorted by U.S. ships.  (About 75 U.S. troops were lost on a ship returning from Europe.  Only one troop ship, the SS Tuscania, was sunk by U-boat under British escort; about 200 U.S. troops were lost, although British destroyers heroically saved about 1,800 Americans from that ship.)

(My thanks to Dr. David Kohnen, Executive Director, NHHC Naval War College Museum, for his ground-breaking research on “UNREP” with a great article soon to follow, and his work on Vice Admiral Sims.)