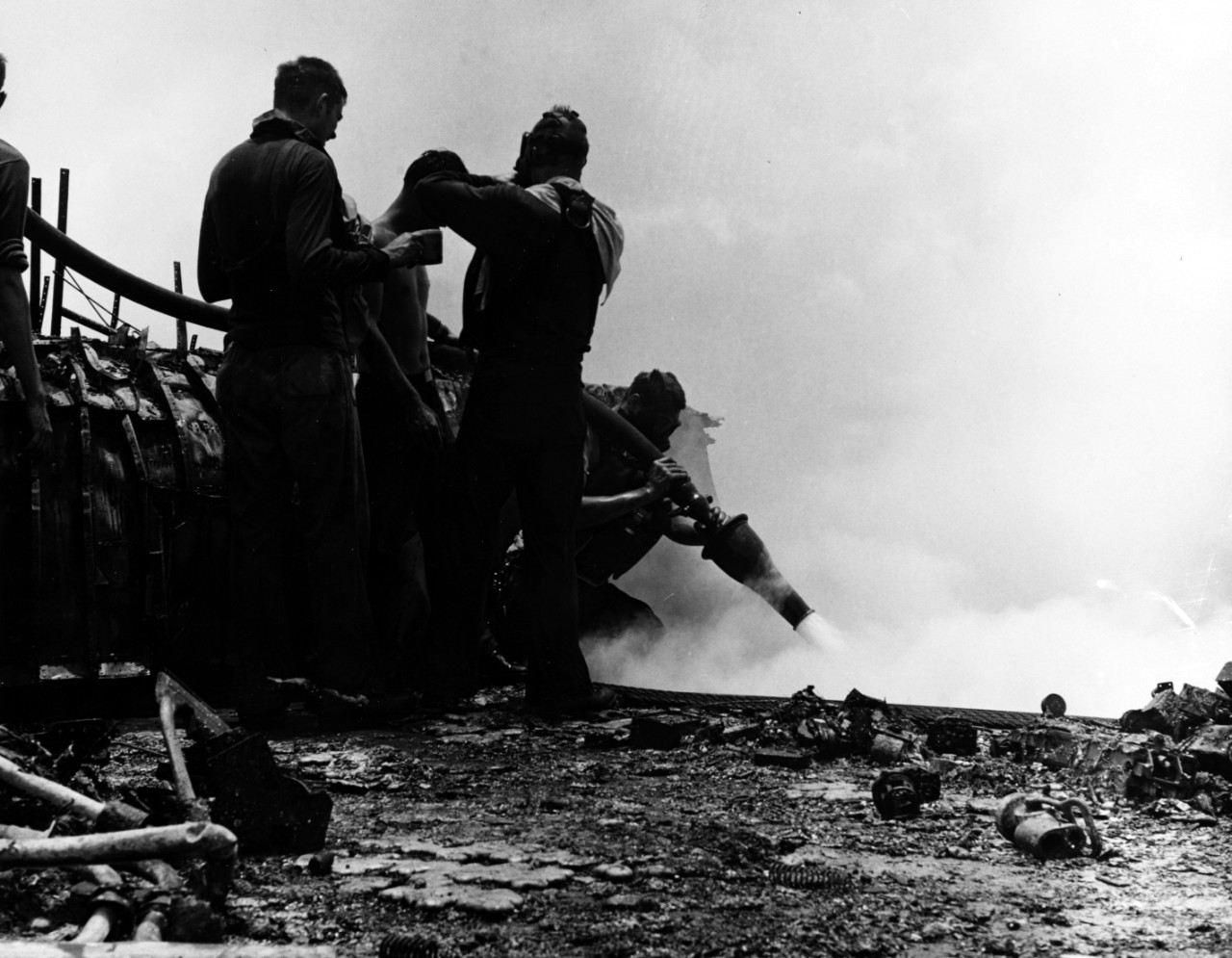 Aboard Forrestal (CVA-59), crewmen battle compartment fires from the after flight deck in an attempt to check the series of fires and explosions raging through the after sections of the ship. These were due to an initial blast that occurred when heavily armed and fueled aircraft were being prepared for launch during operations in the Gulf of Tonkin, 29 July 1967 (USN 1126632).

By historic standards, the safety record of the U.S. Navy since 1990 has been extraordinarily good. The collisions of Fitzgerald (DDG-62) and John S. McCain (DDG-56) broke an unprecedented streak of no major fatal accidents since a steam valve rupture on Iwo Jima (LPH-2) in 1990 that killed 10. Prior to about 1990, accidents of that magnitude occurred almost on a yearly (or more frequent) basis dating back to the founding of the Navy. Some of the factors cited in the recent collisions, such as undermanned, overtasked ships with deferred maintenance and fatigued crews, have actually been the norm, also dating back to the founding of the Navy. (Commander-in-Chief, U.S. Fleet, Admiral James O. Richardson’s description of the Fleet in 1939 is virtually the same as it is today, for example.)

Even in non-combat situations, U.S. Navy operations have always been inherently very dangerous, with losses of ships and especially crews very commonplace, usually due to the elements. However, disease and ordnance and machinery accidents accounted for many casualties. NHHC tracks over 3,000 U.S. Navy shipwrecks (one-third sunk as targets) and over 14,000 aircraft wrecks—a majority of these comprise non-combat losses.

In 1781, the Continental Navy sloop Saratoga was lost in a gale with all hands (about 80). It was the first of at least 27 U.S. Navy ships lost with all hands (many of those ships lost without a trace) due to non-combat causes, the last being Scorpion (SSN-589) in 1968. The last surface ship lost without trace was the tug Conestoga (AT-54), with 56 crewmen, in 1921 (her wreck was identified in 2015). The frigate Constitution recorded her first fatalities at the start of her second voyage in 1799 (falls from the tops or overboard).

Throughout the 1800s, losses were frequent, some with high casualties, such as frigate Insurgent, which vanished in September 1800 with 340 crewmen, or screw sloop-of-war Oneida, sunk in a collision off Yokosuka, Japan, in 1870 with a loss of 125 crewmen. There were other major ship losses with fortunately few or no casualties, such as steam frigate Missouri, the newest, largest, and most technologically advanced ship in the Navy at the time, which burned and sank at Gibraltar in 1843. Another notorious accident was the explosion of the “Peacemaker” gun on screw sloop-of-war Princeton in 1844 that killed the Secretary of State, Secretary of the Navy, and only by luck missed President John Tyler.

The Navy did not begin systematically keeping records of non-combat deaths until about 1900. Between then and World War I, non-combat deaths in the Navy varied between 250 and 350 per year. Early in the century, diseases such as tuberculosis and pneumonia, as well as food poisoning and drowning, accounted for many. However, as those types of deaths began to decline in the 1920s, they were balanced by increased fatalities in submarines, aviation, and vehicle accidents. Throughout that period, shipboard deaths due to steam ruptures, boiler explosions, coal dust explosions, oil fires, ammunition accidents, malfunctioning machinery, electrocution, and similar accidents accounted for 100 or more deaths per year.

Submarine duty was particularly hazardous. The first U.S. submarine, Alligator, was lost in a storm off Cape Hatteras in 1863. Since that time, at least 23 U.S. submarines have been lost to accidents, frequently with all or most of the crew, beginning with F-4 in 1915 (all 21 crewmen lost). Of 52 submarines lost during World War II, at least six were lost due to non-combat accidents (not counting circular-running torpedoes or “friendly” fire) and another eight are simply unaccounted for, usually listed as “presumed mine strike,” but accidents cannot be ruled out.

Deaths due to accident significantly increase during wartime. In World War I, the Navy lost 431 men due to enemy action and over 4,400 due to accidents and disease (plus another 5,027 to Spanish Influenza). In World War II, the Navy lost 36,950 men killed in action and 19,781 killed in accidents and non-combat causes (another 5,500 died from “natural causes”). Within these wartime numbers were 3,173 killed in aerial combat and 8,184 killed in aviation accidents, which gives an indication of the inherent added dangers of naval aviation. Even in Vietnam, of 2,556 Navy names on the Vietnam Veterans Memorial, only 1,631 were killed in combat—the rest were due to “operational” causes.

Note: Use of seven deaths as threshold is purely arbitrary in order to show fatal accidents equivalent or worse than USS Fitzgerald in 2017. Lowering the threshold to three does not change the list between 1990 and the present, but it does result in a very extensive increase in the list of accidents prior to 1990. Most fatal accidents since 1990 have been aircraft with one or two deaths, or single man-overboards. 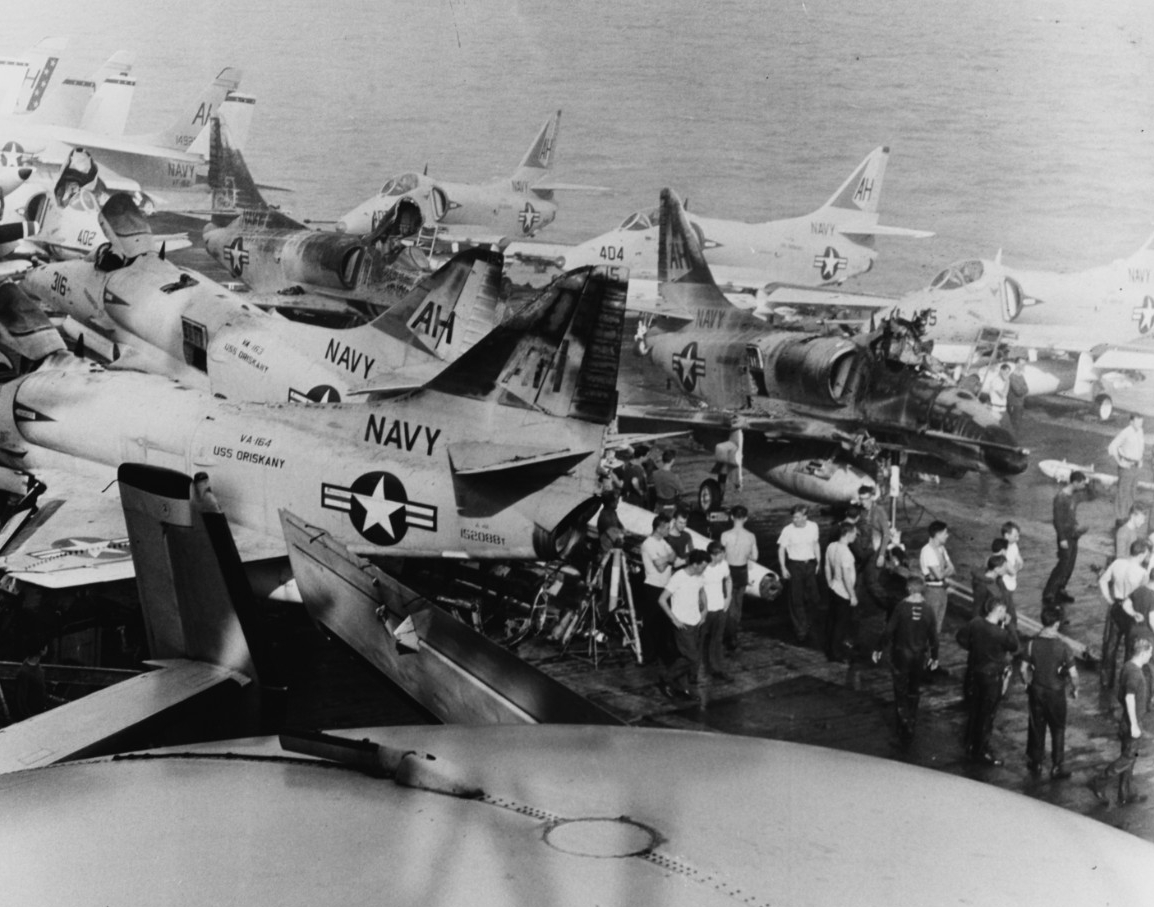 1954–60: Although devoid of major accidents, this period of transition to jet aircraft was characterized by a very high operational loss rate of planes and pilots to flight-deck crashes and other mishaps—the era of spectacular ramp strikes. 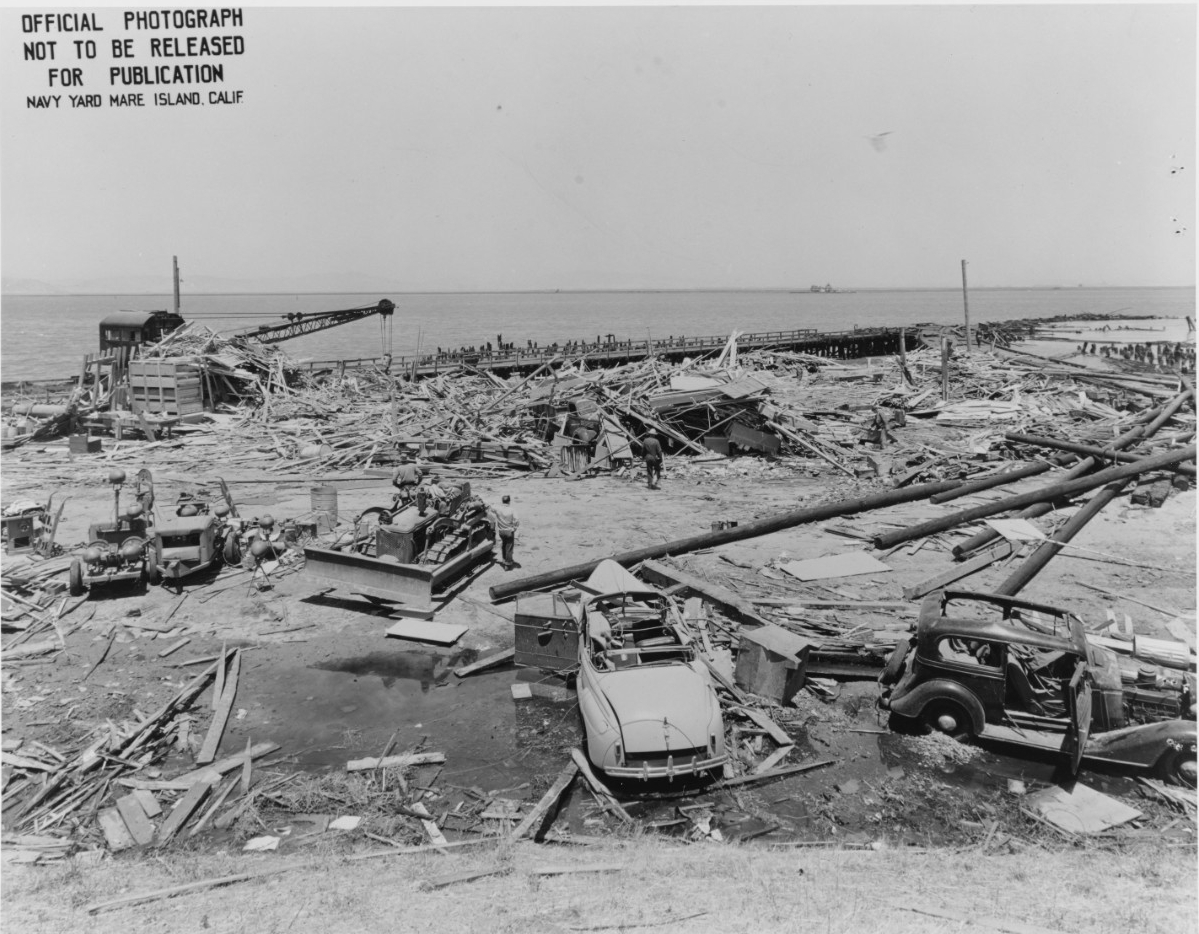 Naval Magazine, Port Chicago, California: Damage resulting from the 17 July 1944 ammunition explosion. This view looks north, showing the wreckage of Building A-7 (Joiner Shop) in the center and the destroyed ship pier beyond. Note bulldozer and damaged automobiles in the foreground, railway crane at left, and scattered pilings (NH 96823). 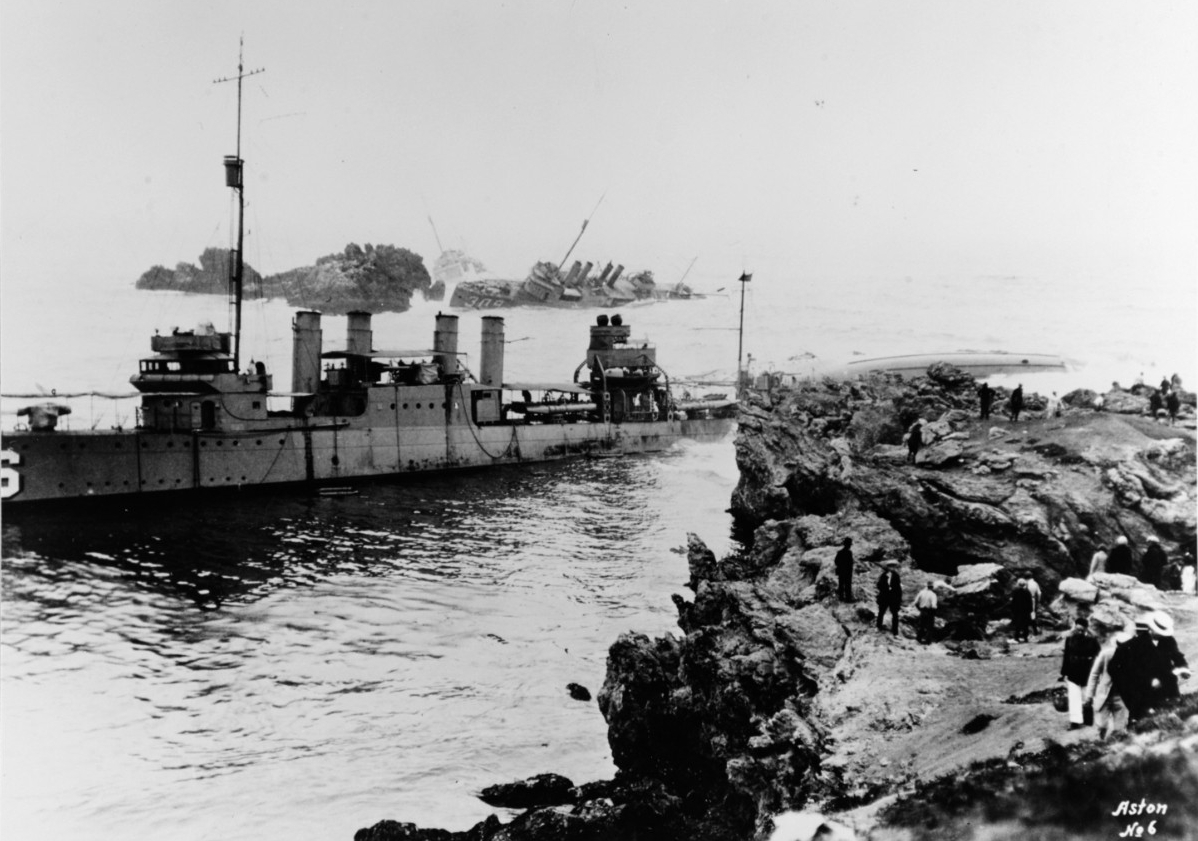 Wrecked destroyers on Honda Point, California, soon after the night of 8 September 1923, when they went ashore in a fog. In the foreground is Chauncey (DD-296) with Young (DD-312) capsized astern. Woodbury (DD-309) is in the center distance, with Fuller (DD-297) faintly visible behind her (NH 84822). 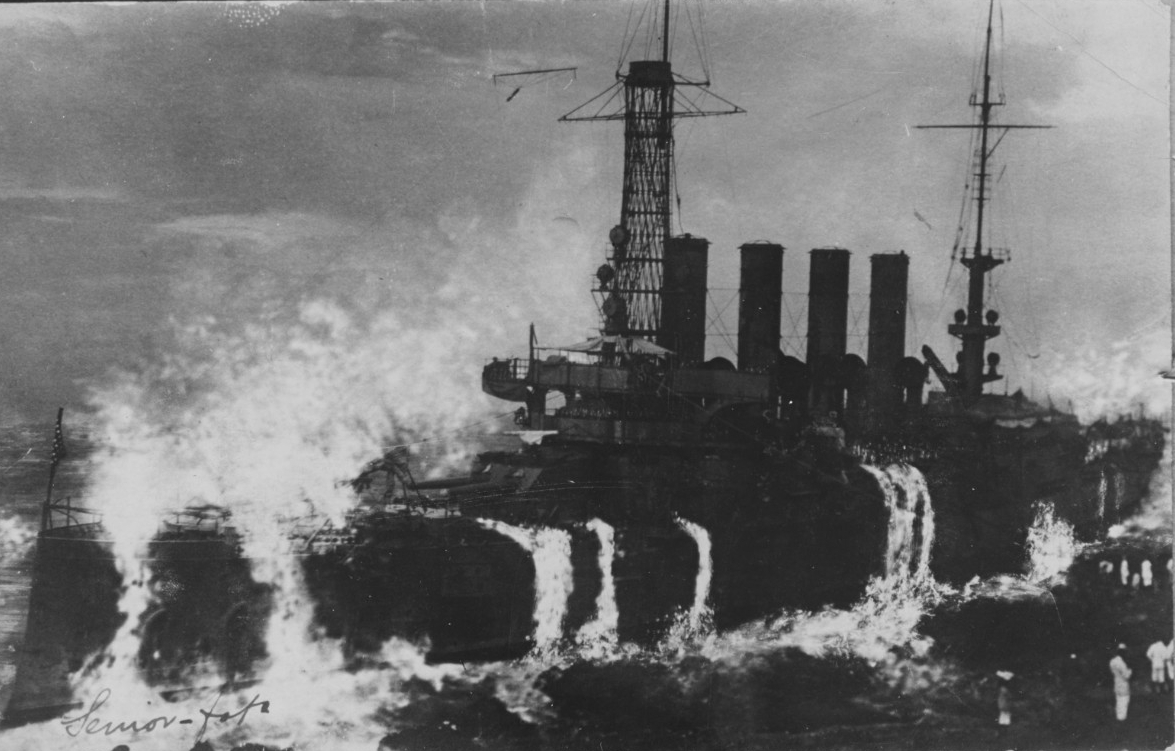 For the most thorough accounting of U.S. Navy non-combat casualties, see the NHHC document "Casualties: US Navy and Marine Corps Personnel Killed and Injured in Selected Accidents and Other Incidents Not Directly the Result of Enemy Action."

For an accounting of U.S. Navy surface ship accidents since World War II, see H-Gram 071 for an overview and H-071-2 for a complete list.

For an accounting of U.S. Navy ships lost with all hands (non-combat), see H-Gram 060 for an overview and H-060-2 for a complete list.

Back to H-Gram 075 Overview