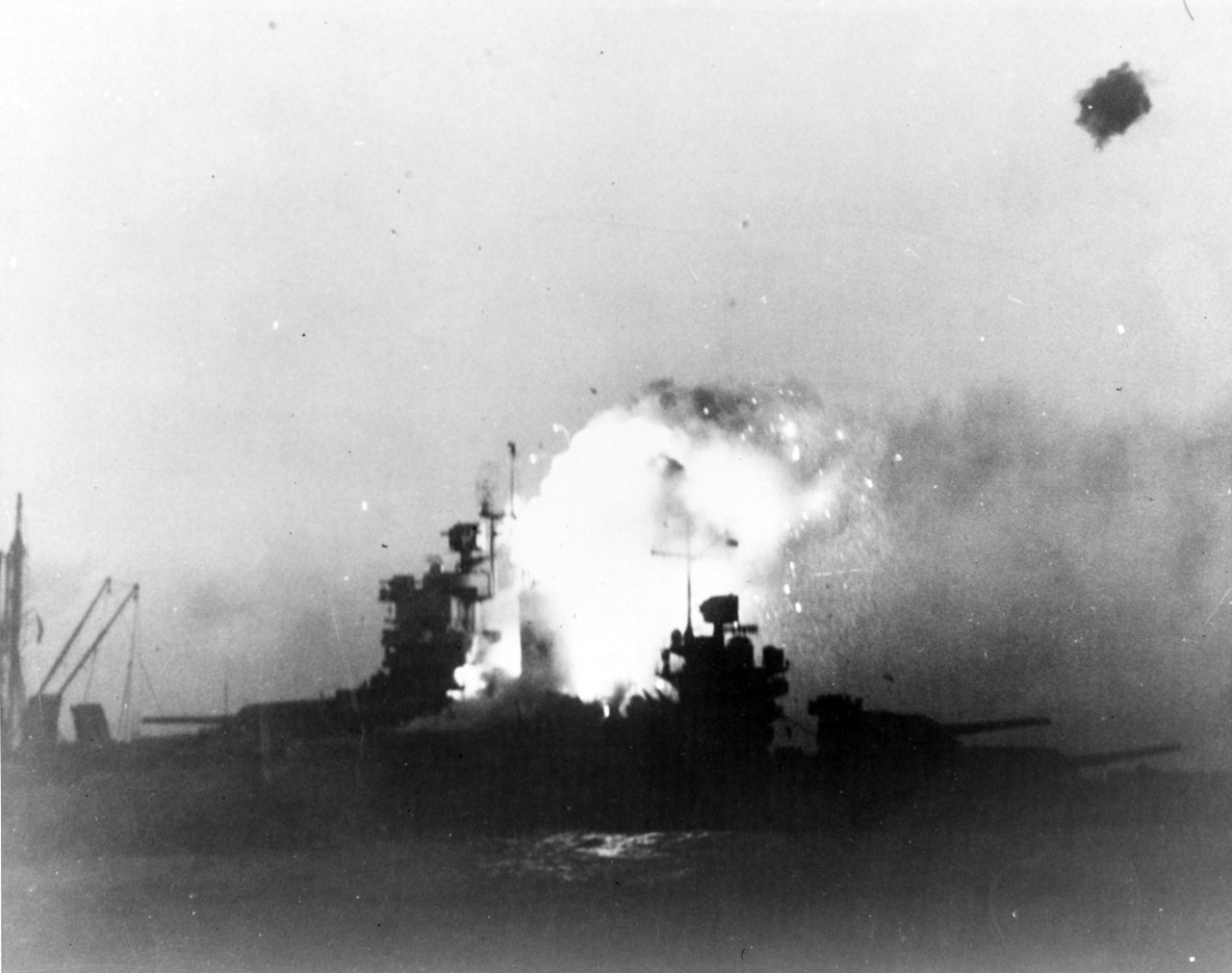 This H-gram covers the naval battle of Okinawa from late May to early June 1945, including the kamikaze hits on flagships Bunker Hill (CV-17, Vice Admiral Marc “Pete” Mitscher), New Mexico (BB-40, Admiral Raymond A. Spruance) and Enterprise (CV-6, Vice Admiral Mitscher). All of these ships survived, although the hits on Bunker Hill caused the most casualties in a single ship from a kamikaze attack, with 396 crewmen killed. The mass kamikaze attacks Kikusui No. 6, 7, and 8, and Typhoon Viper are also discussed.

As the ground campaign at Okinawa dragged on in a bloody slog against fierce Japanese resistance, Japanese kamikaze aircraft continued to hit U.S. ships around the island in a series of mass attacks of more than 100 aircraft, interspersed with smaller raids that could occur at any hour, creating immense strain on crews that had to react almost instantly to the threat. The great majority of Japanese kamikazes were shot down by U.S. fighters and antiaircraft fire, but planes flown by pilots who intended to die proved very difficult to stop, and invariably some got through even the best defenses.

On 11 May, two kamikazes in quick succession hit the carrier Bunker Hill, Vice Admiral Mitscher’s Task Force 58 flagship, at a critical time, when the flight deck was packed with planes that were armed, fueled, manned, and about to launch. The result was a conflagration of unspeakable horror as 396 Americans died or went missing in the flames and suffocating toxic smoke, the largest loss of life aboard a single ship due to a kamikaze attack. Even when it seemed all hope was lost, Bunker Hill’s gunners kept shooting, and her damage control teams never quit. They saved the ship, although she would never be operational as an aircraft carrier again. (Mitscher’s chief of staff, Commodore Arleigh A. Burke, was awarded a Silver Star for extricating men from a burning compartment.)

On 13 May, a kamikaze hit Admiral Spruance’s Fifth Fleet flagship, the old battleship New Mexico, the second time his flagship had been hit. For a time, Spruance was missing after the plane hit; he was finally found manning a firehose with other Sailors. Despite taking heavy casualties (54 dead Navy and Marine Corps personnel, mostly gunners), the battleships were built to take punishment, and New Mexico stayed in the line as the flagship until Spruance’s turnover with Admiral William F. Halsey on 27 May. Spruance was awarded a Navy Cross.

No sooner had Vice Admiral Mitscher transferred his TF 58 flag to Enterprise than she, too, fell victim to a kamikaze attack. On 14 May, 26 Japanese planes attacked. Only one made it through the gauntlet to put Enterprise and her 20 battle stars (the record) out of action for the rest of the war. As the “night carrier,” Enterprise had all planes de-armed and de-fueled, gasoline lines drained, and bomb magazines buttoned up, so her damage was far less severe than that of Bunker Hill. Enterprise would be the last carrier to be hit by a kamikaze. For more on the kamikaze attacks on the three flagships (and to see what actor Paul Newman had to do with it), see attachment H-048-1.

Between Kikusui No. 6 on 10–11 May and Kikusui No. 9 on 3–7 June, there was a steady toll of U.S. warships (mostly destroyers) sunk, damaged beyond repair, or put out of action for the rest of the war by kamikaze attacks. Some of these ships put up valiant resistance, shooting down multiple kamikazes before they could complete their attacks. Some U.S. ships faced one or two kamikazes that just kept on coming no matter how many times they were hit. In most cases the crews saved their ships when they should have sunk, even though many of those ships would never fight again. Crews on other ships simply never had a chance. In every case, a common theme was uncommon valor: Numerous Navy Crosses were awarded to commanding officers who continued to fight even as their ships burned. Navy Crosses went to junior officers, too, such as Ensign Leo D. Fay on Douglas H. Fox (DD-779), who despite mortal wounds led a decimated damage control team in saving the ship from a magazine explosion. Another was Lieutenant Edgar B. Wicklander, USNR, commanding officer of LCS(L)-356, who boldly brought his ship alongside a burning destroyer that had just suffered a magazine explosion and saved the lives of numerous stunned and wounded Sailors.

The most tragic events were the loss of destroyers Longshaw (DD-559) and Drexler (DD-741). Longshaw ran aground and was hit in a forward magazine by shore battery fire, which obliterated the entire ship forward of the bridge, killing 86 crewmen, including the commanding officer. Drexler, a new Allen M. Sumner–class destroyer, was hit by a kamikaze, which caused an explosion so powerful that she went down in less than a minute, taking 164 crewmen to the bottom with her. Damaged Bates (APD-47) was heroically towed into an anchorage area, only then to capsize and sink. LSM-135 was sunk while in the act of rescuing survivors. LST-808 became yet another ship lost to a kamikaze.

During this period, several ships were damaged beyond repair, including four destroyers: Thatcher (DD-514), Butler (DD-636), Forrest (DD-461), and Shubrick (DD-639); destroyer escort O’Neill (DE-188); and the three fast transports Chase (APD-54), Bates, and Roper (APD-20), which had been the first U.S. ship to sink a German U-boat, in 1942. They all would have sunk but for the heroic actions of their crews and some luck.

Other ships were badly damaged, and repairs were not completed until after the war ended: four destroyers, including Braine (DD-630), which survived despite high casualties (67 dead and 103 wounded); a fast destroyer transport; an assault transport; and an LCS (landing craft, support). Other ships were knocked out of action for more than 30 days, but made it back into the war before it was over.

The Japanese continued their dismal track record with Kaiten-equipped submarines, as an Avenger off escort carrier Anzio (CVE-57) caught I-361 on the surface and sank her (and five Kaiten manned torpedoes) with a Fido acoustic homing torpedo.

Finally, several days after Admiral Halsey relieved Admiral Spruance and Fifth Fleet became Third Fleet again, Typhoon Viper hit. All four carriers in Task Group 38.1 suffered significant damage, particularly fleet carriers Wasp (CV-18) and Bennington (CV-20), which had their forward flight decks bashed in. The new heavy cruiser Pittsburgh (CA-72) survived, having had 104-feet of her bow torn off; fortunately, her skipper had just called the crew to battle stations, so the forward berthing compartments were empty and no one was killed. Although Typhoon Viper caused far less damage and far lower personnel losses than Typhoon Cobra had claimed in December 1944, the court of inquiry was scathing in its conclusions of “lessons not learned” from Cobra.

For more on the naval battle of Okinawa, see attachment H-048-2. And if you are getting tired of reading about kamikazes, imagine what the crews thought as they kept getting hit. There were still three more weeks to go in what seemed like an interminable battle, and they would be costly weeks, too.

For more on the background history of the invasion of Okinawa, please see H-Gram 044. See also H-Gram 045 and 046 for coverage of the earlier stages of the Naval Battle of Okinawa (March–May 1945). 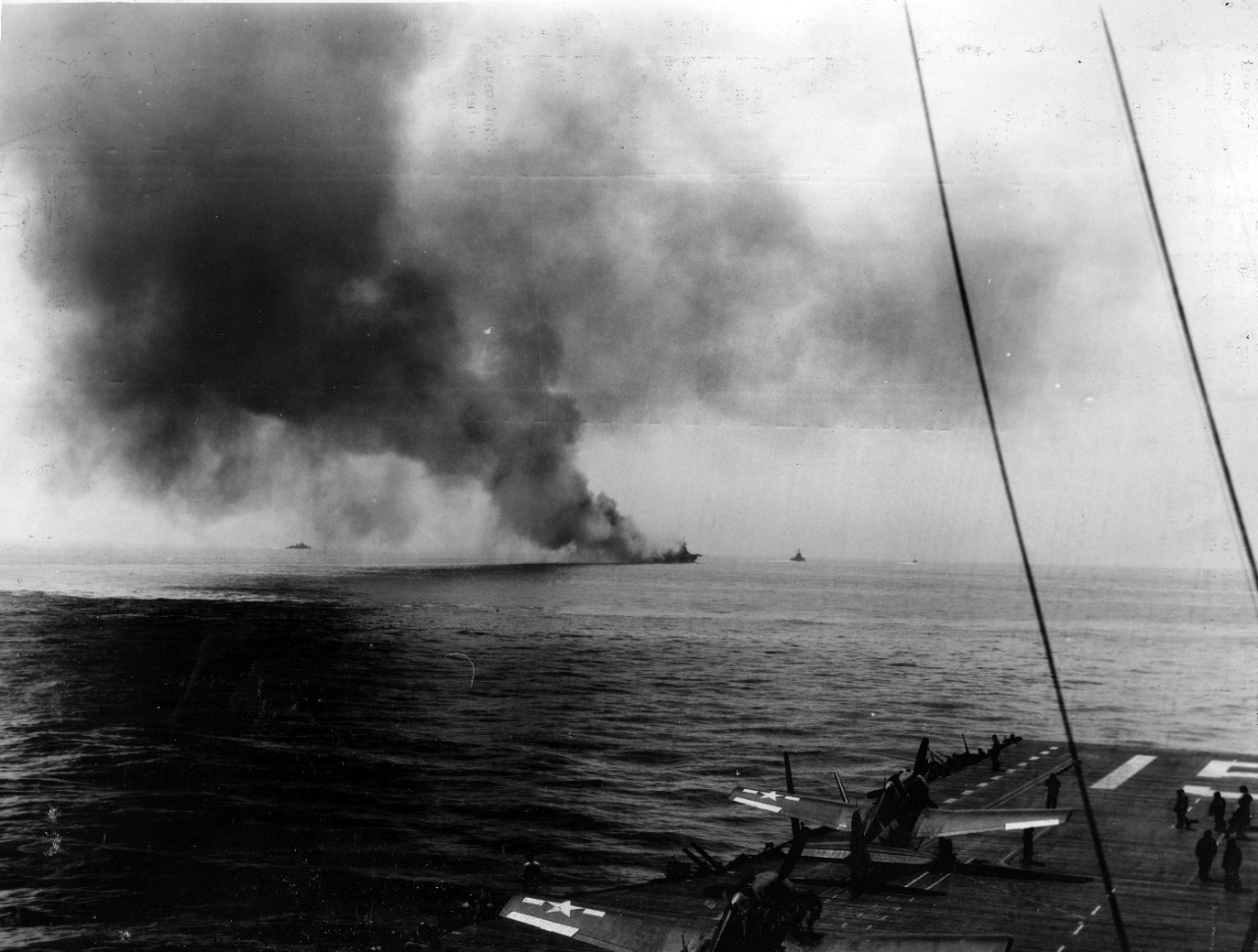