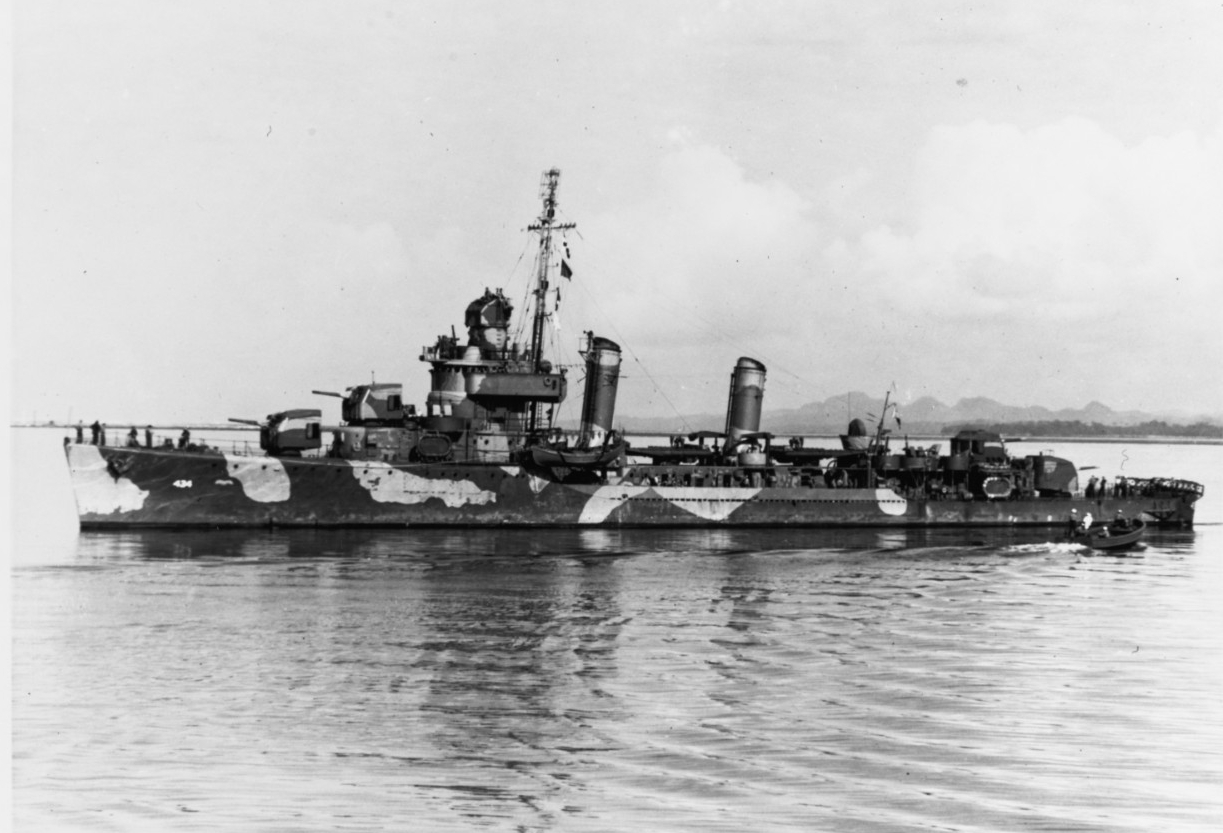 Aviation fuel at Henderson Field on Guadalcanal was perpetually in short supply. Even before the Japanese battleship bombardment of Henderson Field that killed 41 Marines and destroyed or damaged most of the aircraft at the airfield, a U.S. Navy convoy was en route to Guadalcanal with aviation fuel. The cargo ships USS Alchiba (AKA-6) and USS Bellatrix (AKA-3), along with the PT-boat tender USS Jamestown (PG-55), were each towing a fuel barge. The small convoy was escorted by the destroyers USS Nicholas (DD-449) and USS Meredith (DD-434), and the fleet tug USS Vireo (AT-144). The convoy was a desperate gamble to get critical fuel to Guadalcanal. The Japanese Carrier Division One (fleet carriers Shokaku, Zuikaku, and light carrier Zuiho) was operating north of Guadalcanal seeking U.S. carriers. However, with USS Enterprise (CV-6) still repairing battle damage at Pearl Harbor, the U.S. had only one operational carrier in the Pacific, USS Hornet (CV-8), operating well south of Guadalcanal. With only one carrier, Vice Admiral Robert Ghormley, Commander of U.S. Forces in the South Pacific Area, sought to avoid engagements with the Japanese. As a result, the convoy would have no air cover. The strategy was based on the slim hope that the convoy would not be sighted by Japanese aircraft.

Early on the morning of 15 October, Ghormley received solid intelligence that Japanese ships, including aircraft carriers, were operating in the vicinity of the convoy’s intended track. At 0608, Ghormley ordered the convoy to turn back because threat was too high. However, with the fuel situation on Guadalcanal extremely critical following the Japanese bombardment, the Vireo was ordered to take one of the fuel barges in tow and Meredith would provide escort. The hope was that the smaller group would slip through Japanese reconnaissance.

Meredith, Vireo, and the barge got to within 75 miles of Guadalcanal before their luck ran out. Sighted by a search plane, and then attacked by two planes at 1050 that were out on an unsuccessful scouting mission looking for American carriers, the convoy was in serious trouble. Recognizing that the planes were carrier-based and that no other U.S. ships were in the vicinity, the skipper of Meredith, Lieutenant Commander Harry Hubbard, correctly deduced that Meredith would shortly come under a massive carrier air attack. Initially, Hubbard ordered the Vireo to cut loose the barge, and reverse course in an attempt to escape. It quickly became apparent that with Vireo’s slow speed, that course of action was futile. Indeed, at 1137, Zuikaku launched a 38-plane strike (21 Val dive-bombers, nine Kate torpedo bombers, and eight Zero fighters for escort) to attack Meredith and any other ships they might find. Knowing that Vireo was a defenseless sitting duck, Hubbard ordered the tug abandoned, and Vireo’s crew was brought aboard the Meredith to give them the best chance of surviving. Hubbard then planned to sink Vireo with a torpedo so it would not fall in Japanese hands.

It was too late. At 1225, the Zuikaku strike rolled in on Meredith. She put up a gallant fight, knocking down three of her attackers (one Val and two Kates), but the strike was overwhelming and extremely well-executed. In a matter of minutes, Meredith was hit by 14 bombs and at least three torpedoes, and was repeatedly strafed. The destroyer sank within a matter of minutes. Despite serious burns about his face, Hubbard continued to fight the ship until the end, abandoning ship only after the rest of the surviving bridge crew got off. Japanese aircraft strafed survivors in the water.

Perversely, the abandoned Vireo was not hit (and the barge survived too.) However, Vireo was drifting away, and only one raft-load of Meredith and Vireo survivors reached the tug, where they were later rescued. The other rafts, filled with burned and mangled Sailors, became a preview of what would happen to Sailors on the USS Juneau (CL-52) and USS Indianapolis (CA-35) later in the war. As the rafts and wreckage drifted for three days and three nights, numerous Sailors died from wounds, exposure, salt-water ingestion (and resulting mental incapacity and hallucinations), and from particularly aggressive shark attacks. One shark even jumped into a raft and ripped a chuck from an already mortally wounded Sailor. There was not enough room on the rafts, so the less-injured Sailors treaded water, hanging on to the rafts, and had to fight off the sharks as best they could. Most of the injured, including burned and blinded Hubbard, perished in the rafts.

Finally, the destroyers USS Grayson (DD-435) and USS Gwin (DD-433) found 88 survivors of Meredith and Vireo adrift.  (About another dozen had earlier been found on the Vireo.)  However, 187 from Meredith and 50 from Vireo died in a desperate attempt to get fuel to the Marines on Guadalcanal.

(I haven’t been able to find a record of a medal for valor for Lieutenant Commander Harry Hubbard; however the Sumner-class destroyer DD-748 was named in his honor and served with distinction in World War II, Korea, and Vietnam.)

Back to H-Gram 011 Overview