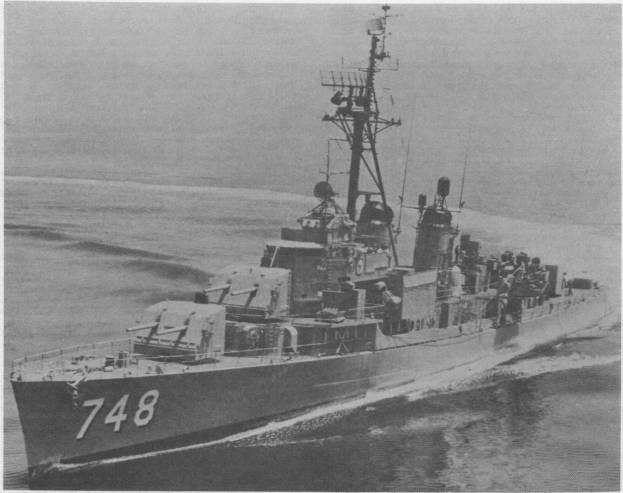 Harry Enson Hubbard was born 18 March 1903 in Baltimore, Md. He graduated from the Naval Academy in June 1925, served 3 years in battleship Maryland, then qualified in submarines at New London, Conn. Following duty in submarine 8-34, he completed Naval Academy postgraduate work, then served in submarine tender Holland, and, was executive officer of destroyer Twiggs. He served at the Naval Torpedo Station at Newport, then commanded destroyer Roper 1939 to 1940, before assignment as staff gunnery officer for destroyers In the Atlantic. The latter duty terminated 1 March 1942 when Hubbard took command of destroyer Meredith (DD-434).

In command of Meredith, Hubbard helped screen carrier Hornet off Japan for the famed Doolittle bombing raids on Tokyo 18 April 1942. Thereafter he conned his destroyer on arduous patrol and escort from Hawaii to the Samoan, Fiji, and Solomon Islands. His destroyer helped cover transports landing reinforcements on bitterly contested Guadalcanal 18 September 1942.

During the darkest days of the Solomons Campaign Hubbard joined in maintaining the lifeline of supplies to fighting men holding their ground on Guadalcanal. On 15 October 1942 he fought his ship against Japanese carrier-based scouting planes, then fought off 18 enemy dive bombers and 12 torpedo planes launched by Japanese aircraft carrier Zuikaku. His gunners shot down five of the attackers, all the destroyermen following the example of Hubbard who carried on the fight though blinded by burns about his face. When his men had cleared the bridge, he abandoned the sinking Meredith scant moments before she made her final plunge. He perished on a life raft at sea the morning of 16 October 1942. The heroic stand of Commander Hubbard and his destroyerman had drawn the enemy aircraft away from ships who made it to Guadalcanal with munitions and desperately needed supplies.

Flagship of Destroyer Squadron 64, Harry E. Hubbard trained precommissionlng crews destined for newly constructed warships until sailing for Hawaii 16 January 1945. She served as a training ship out of Pearl Harbor until 17 April, then departed for combat She arrived off Okinawa 8 May 1945 to serve as a picket destroyer guarding against the day and night waves of Japanese aerial raids and suicide runs of kamikaze planes. Although the American fleet suffered losses and damage, it had come to stay. As with all previous Japanese weapons, even the suicide kamikazes were defeated In their attempt to save this, last "stepping stone" to Japan itself. For nearly 2 months Harry E. Hubbard fought off the savage raiders, shooting down four suicide planes that tried to crash her at various times.

When picket destroyers Evans and Hugh W. Hadley were badly damaged in their stand against some 50 suicide planes 11 May 1945, Harry E. Hubbard, first to arrive on the scene, went alongside Evans to render fire-fighting, damage control and medical aid. She gave similar assistance to destroyer Barry 24-25 May, shooting down two suicide planes as she escorted Barry from picket station into Kerama Retto. One enemy plane was disintegrated by Harry E. Hubbard's gunners a bare 50 yards from the ship.

Harry E. Hubbard remained off Okinawa until 24 July 1945, then escorted occupation troops to Jinsen, Korea, and carried the Commander of Destroyer Squadron 64 to Chinkai, Korea, to oversee the demilitarization of the former Japanese naval base there. She returned to Jin-sen 7 November 1945, then based out of Tsingtao, China. She performed escort, mail, and communication service for the North China Occupation force until departing 16 March 1946, for the California seaboard. She arrived at San Francisco 28 March 1946, underwent demobilization overhaul at Oakland, then decommissioned at San Diego 15 January 1947. She remained in the Pacific Reserve Fleet until recommissioned 14 May 1949 but decommissioned 12 December without having gone to sea.

Following the invasion of South Korea, Harry E. bard recommissioned 27 October 1950, Comdr. Burres D. Wood in command. After initial shakedown along the coast of California, she departed San Diego 2 January 1951 for two months of training in Hawaiian waters. She then steamed to assist the U.N. Forces in Korea. Besides helping guard the fast carrier task force making repeated airstrikes against the enemy, she frequently joined in gunstrike missions to bombard coastal rail and communication centers and performed as sea-going artillery to support the advance of land troops. Her bombardment missions were conducted against targets at Yongdae Gap, Wonsan, Songjin, Chingjin, Kyoto, Ohako, Bokuko, Chuminjin, and other enemy strongholds of supply and reinforcement. When destroyer Walke (DD-723) was heavily damaged by underwater explosion off Wonson 11 June 1951, Harry E. Hubbard, with the same skill as off Okinawa in 1945, moved in to render effective medical and damage control assistance. She returned to the California coast in October 1951 for overhaul and completed a similar tour of duty with the 7th Fleet off Korea July to December 1952. She returned to San Diego in January 1953 but again departed 11 July to guard fast carrier task groups watching over the uneasy truce in Korea. Intervened by patrol in the Taiwan Straits, this duty continued until 13 January 1954. She returned to 'San Diego for overhaul and refresher training along the western seaboard.

Harry E. Hubbard departed San Diego 11 August 1954 on the first of nine additional Far East tours with;the 7th Fleet which were completed by the close of 1966. During this service, she joined the roving 7th Fleet 6 to 13 February 1955 in moving in under Chinese Communist artillery defenses to cover the evacuation of Chinese Nationalist from untenable positions on the Tachen Islands. In October to November 1956 she diverted from Australia to the "Dewline" in the Northern Pacific to serve on picket patrol during the Suez Crises. She next joined in combined warfare exercises with SEATO Treaty nations to improve readiness in defending freedom in that part of the world. From time to time, she patrolled the Taiwan Straits to insure Taiwan was not threatened from the Communist mainland of China. She was off Guam in June 1960, twice guarding the flight of President Eisenhower's aircraft during his Far East visit.

When Communist North Vietnamese torpedo boats committed unprovoked attacks on American destroyers patrolling the Gulf of Tonkin 2 to 5 August 1964, Harry E. Hubbard was nearby in the South China Sea screening carrier Ticonderoga (CVA-14). The carrier task group struck back with lightning rapidity to destroy North Vietnamese torpedo boats and their supporting facilities. In awarding the Navy Unit Commendation to Ticonderoga and her screen, Secretary of the Navy Paul Nitze stated that they had "demonstrated the firm intent of the United States to maintain freedom of the seas and to take all necessary measures in defense of peace in Southeast Asia."

Harry E. Hubbard returned to San Diego 28 October 1964 for a year of warfare readiness operations along the western seaboard. In October she departed for the coast of South Vietnam. In company with Valley Forge (IiPH-8) In November and December 1965, she provided gunfire support for two Marine amphibious landings. In the following months she acted as escort to Kitty Hawk (CVA-63) and Hancock (CVA-19) during their strike operations in the South China Sea; acted as Harbor Defense ship at Danang and fired more than 1,000 rounds of exploding 5-inch shells into Viet Cong strongholds along the South Vietnamese coast. She returned to Long Beach, Calif., 7 April 1966. The destroyer had drawn nationwide attention 10 March 1966 when the ABC Television Network included scenes of one of her shore bombardments along the South Vietnamese coast. The prowess and accuracy of her gunners was Illustrated by one spotter's comment: "Hubbard is the fastest shooting ship and one of the most accurate I've seen." Harry E. Hubbard headed for the Western Pacific in the spring of 1967 where more action against aggressors in Southeast Asia awaited her.