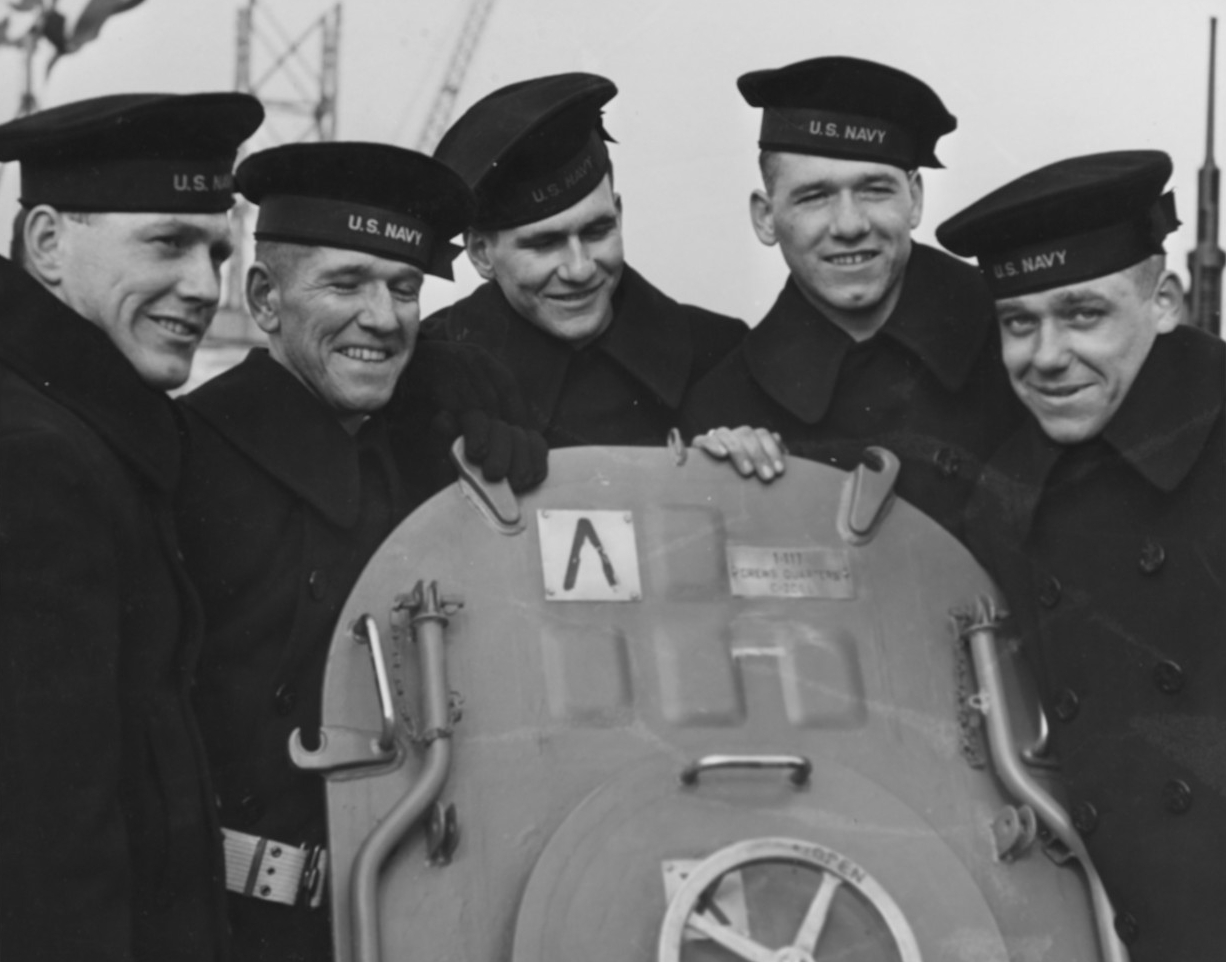 The Sullivan brothers on board USS Juneau (CL-52) during her commissioning ceremonies at the New York Navy Yard, 14 February 1942. All five were lost with the ship on 13 November 1942 following the Naval Battle of Guadalcanal. The brothers are (from left to right): Joseph, Francis, Albert, Madison, and George Sullivan. Naval History and Heritage Command photograph, NH 52362.

All five of the Sullivan brothers from Waterloo, Iowa, were tragically killed in action on 13 November 1942 while serving aboard USS Juneau (CL-52). The death of the brothers was the biggest blow to any one family in U.S. wartime history.

Juneau initially served in the Atlantic, but was transferred to the Pacific in August 1942. Late in October 1942, she took part in the Battle of the Santa Cruz Islands and, on 12 November fought off Guadalcanal. In that action, a torpedo severely damaged the ship. The following morning, the crippled cruiser, down by the bow and struggling to make 18 knots, retired from the battle area. Handling sluggishly as she limped through the glassy-calm sea, Juneau was an easy target for the nearby Japanese submarine I-26. A torpedo strike hit the damaged cruiser and detonated her magazines. The resulting explosion tore her apart, and she went down in just 42 seconds.

Four of the Sullivan brothers, Coxswain Francis Sullivan and Seamen 2nd Class Joseph, Madison, and Abel, failed to make it topside in time to abandon their doomed ship. Gunner’s Mate 2nd Class George Sullivan, wounded during the 12 November night action, managed to get over the side and pull himself onto a raft, but died of his wounds a few hours later. Only ten of approximately 140 were rescued from the ship.

George and Francis Sullivan—the two eldest—enlisted in the U.S. Navy on 11 May 1937, and served on the destroyer USS Hovey (DD-208) into June 1941. At Des Moines, Iowa, on 3 January 1942, George and Francis, accompanied by their younger brothers Joseph, Madison, and Albert, reenlisted to avenge the loss of Seaman 1st Class William V. Ball, a friend, who was killed while serving on the battleship USS Arizona (BB-39) during the Japanese attack on Pearl Harbor. After receiving initial training at the Naval Training School in Great Lakes, Illinois, all five brothers, at their expressed request, joined the light cruiser Juneau at the New York Navy Yard on 3 February 1942.

The brothers were survived by their parents, their only sister Genevieve, and the youngest brother's wife and son, Katherine Sullivan and Jimmy.

There have been two ships named to honor the fallen brothers. The first, USS The Sullivans (DD-537), was commissioned on 30 September 1943. Her sponsor was the brothers' mother, Alleta. The ship served in the U.S. Navy until she was decommissioned on 7 January 1965. She is currently a memorial at the Buffalo and Erie County Naval and Military Park in New York. The second ship, USS The Sullivans (DDG-68), was commissioned on 19 April 1997 at Staten Island, New York, under the command of Commander Gerard D. Ronocolato. The motto of the Arleigh Burke-class destroyer is “We Stick Together.” The ship is still active and is homeported in Mayport, Florida.

Since their loss, a lot of confusion has resulted from the many myths surrounding both the Sullivan brothers and the Navy's policy regarding family members serving together at sea. For more, please review the links below.

USS Juneau (CL-52) and the Naval Battle of Guadalcanal