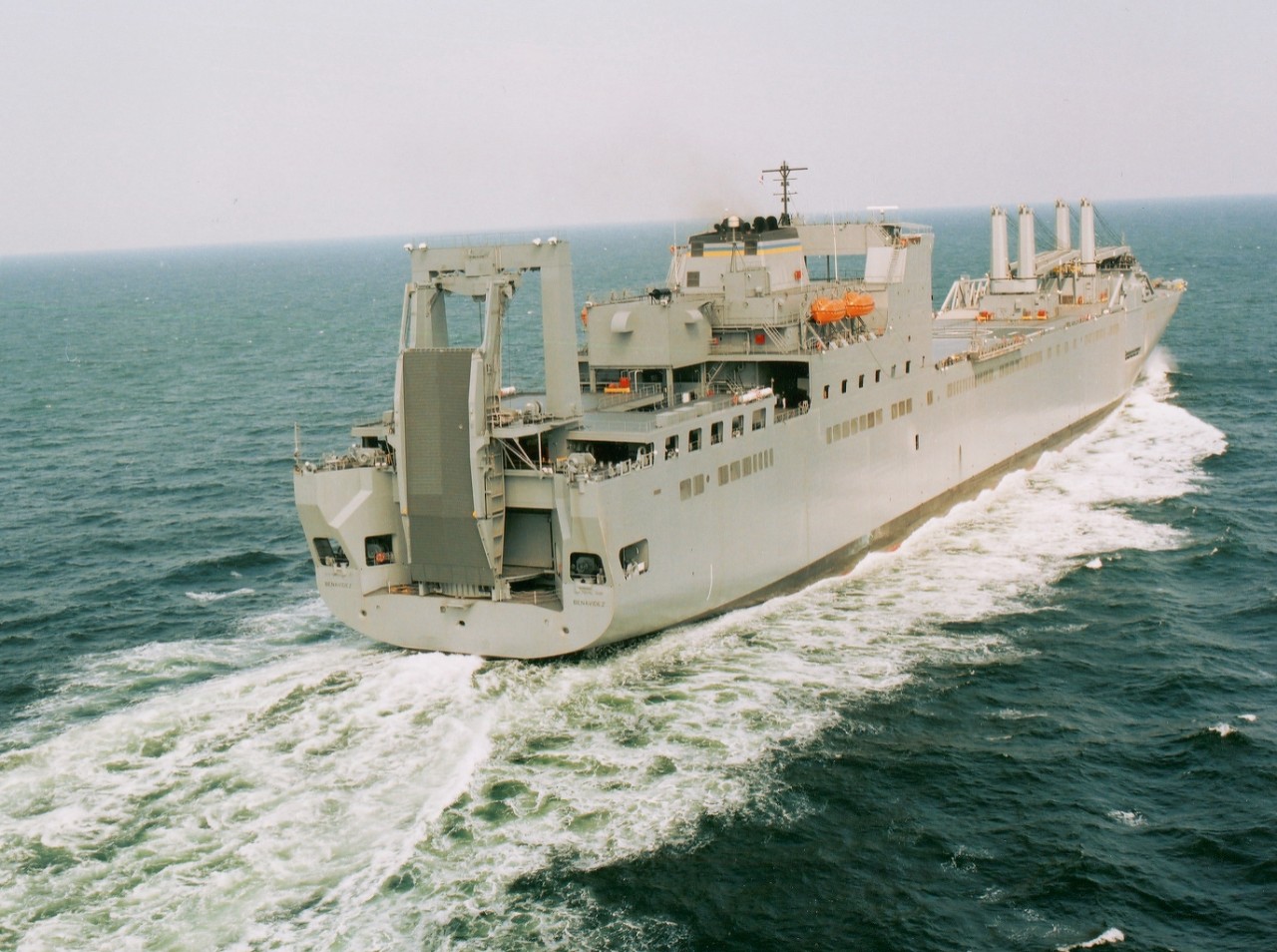 USNS Benavidez (T-AKR-306) proudly bears the name of U.S. Army Master Sergeant Raul (Roy) Perez Benavidez, who received the Medal of Honor for a series of daring and extremely valorous actions during the Vietnam War in 1968.

Benavidez was born on 5 August 1935, in Lindenau, Texas. He enlisted in the Texas Army National Guard in 1952 during the Korean War and in June 1955 transitioned to active duty Army. In 1959, he completed airborne training and was assigned to the 82nd Airborne Division at Fort Bragg, North Carolina.

On the morning of 2 May 1968, a 12-man Special Forces reconnaissance team was inserted by helicopters into a dense jungle area west of Loc Ninh, Vietnam, to gather intelligence information about confirmed large-scale enemy activity. The area was controlled and routinely patrolled by the North Vietnamese army. After a short period on the ground, the team met heavy enemy resistance, and requested emergency extraction. Three helicopters attempted extraction, but were unable to land due to intense enemy small arms and anti-aircraft fire. 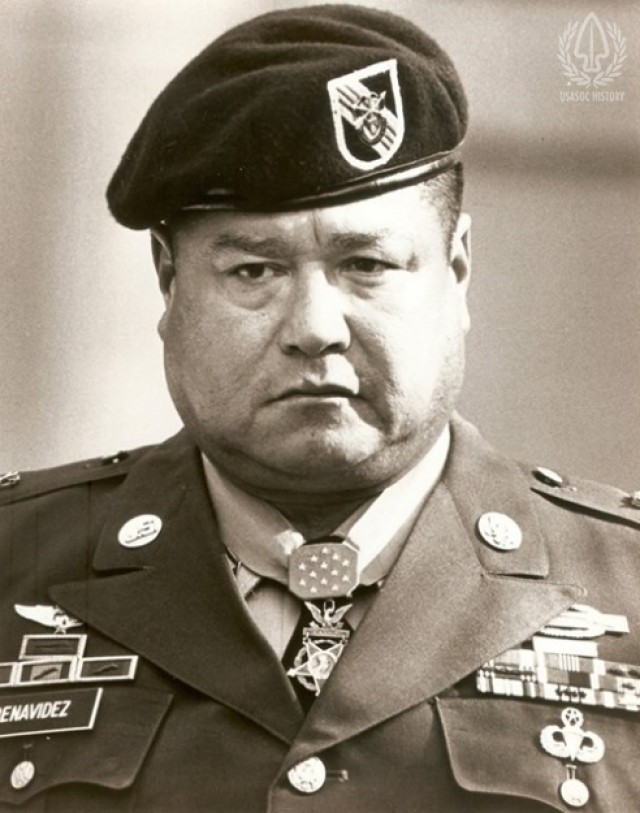 While assigned to Detachment B56, 5th Special Forces Group (Airborne), 1st Special Forces, Republic of Vietnam, Benavidez was at a forward operating base in Loc Ninh monitoring the operation by radio when the helicopters, who attempted the extraction, returned to off-load wounded crewmembers and to assess aircraft damage. Benavidez voluntarily boarded a returning aircraft in order to assist in another extraction attempt. Realizing that all the team members were either dead or wounded and unable to move to the pickup zone, he directed the aircraft to a nearby clearing where he jumped from the hovering helicopter and ran approximately 75 meters under heavy small arms fire to the crippled team.

Prior to reaching the team's position, he was wounded in his right leg, face and head. Despite his injuries, Benavidez took charge, repositioning the team members and directing their fire to facilitate the landing of an extraction aircraft and the loading of wounded and dead team members. He then threw smoke canisters to direct the aircraft to the team's position. Despite his severe wounds and under intense enemy fire, he carried and dragged half of the wounded team members to the awaiting aircraft. He then provided protective fire by running alongside the aircraft as it moved to pick up the remaining team members. As the enemy's fire intensified, he hurried to recover the body and classified documents on the dead team leader.

When he reached the leader's body, Benavidez was severely wounded by small arms fire in the abdomen and grenade fragments in his back. At nearly the same moment, the aircraft pilot was mortally wounded and his helicopter crashed. Although in extremely critical condition due to his multiple wounds, Benavidez secured the classified documents and made his way back to the wreckage, where he aided the wounded out of the overturned aircraft and gathered the stunned survivors into a defensive perimeter. Under increasing enemy automatic weapons and grenade fire, he moved around the perimeter distributing water and ammunition to the men. Facing a buildup of enemy opposition with a beleaguered team, Benavidez mustered his strength, began calling in tactical air strikes and directed the fire from supporting gunships to suppress the enemy's fire in order to permit another extraction attempt.

He was wounded again in his thigh by small arms fire while administering first aid to a wounded team member just before another extraction helicopter was able to land. He began to ferry the troops to the aircraft and on his second trip with the wounded, he was clubbed from behind by an enemy soldier. In the ensuing hand-to-hand combat, he sustained additional wounds to his head and arms before killing the enemy. He then continued under fire to carry the wounded to the helicopter. Upon reaching the aircraft, he spotted and killed two enemy soldiers who were rushing the helicopter from an angle that prevented the door gunner from firing upon them. With little strength remaining, he made one last trip to the perimeter to ensure that all classified material had been collected or destroyed and to bring in the remaining wounded. Only then did he allow himself to be pulled into the extraction aircraft. Benavidez’s actions saved the lives of at least eight men.

During the six hours of continuous operations, Benavidez suffered a broken jaw and 37 bullet and bayonet puncture wounds. He was so mauled that his commanding officer did not believe he would live long enough to receive the Medal of Honor, so he nominated him for the Distinguished Service Cross instead, because the No. 2 award would take less time to process. However, Benavidez survived, and received the Distinguished Service Cross (DSC). Years later, General William C. Westmoreland, who had awarded Benavidez the DSC, learned details of Benavidez’s heroics. He then nominated him for upgrade to the Medal of Honor. Benavidez received the medal in 1981 from President Ronald Reagan during a White House ceremony.

In addition to the Medal of Honor, Benavidez received the Purple Heart and numerous other awards throughout his magnificent career. There are numerous facilities named in his honor to include the Roy P. Benavidez American Legion Post #400 in San Antonio, Texas, and the Roy P. Benavidez City Park in Colorado Springs, Colorado.

Benavidez passed away on 29 November 1998. He is interred at the Fort Sam Houston National Cemetery in San Antonio.