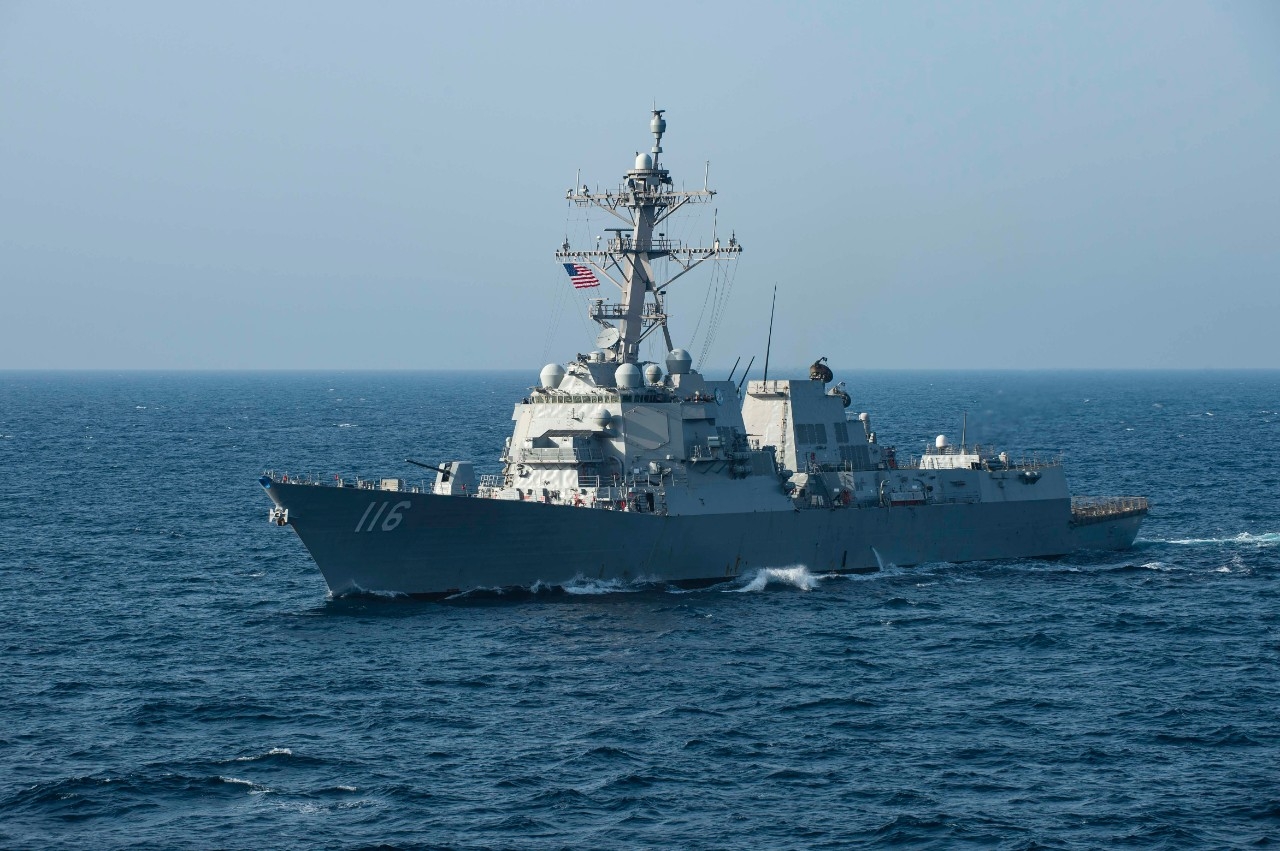 On 4 December 1950, while en route to provide air support for American troops on the ground that were battling thousands of Chinese soldiers during the pivotal Battle of Chosin Reservoir, Brown’s Vought F4U-4 Corsair was hit by antiaircraft fire behind enemy lines. After losing oil pressure and control of the aircraft, Brown was forced to make an emergency landing on the side of a North Korean mountain that was covered in heavy snow. After he crashed, Hudner was circling overhead and realized something was wrong when Brown did not emerge from the cockpit of his wrecked aircraft. Risking a potential court martial, capture by the Chinese, and his own life, Hudner made the decision to crash land his own aircraft in the vicinity of Brown in an attempt to save his life. 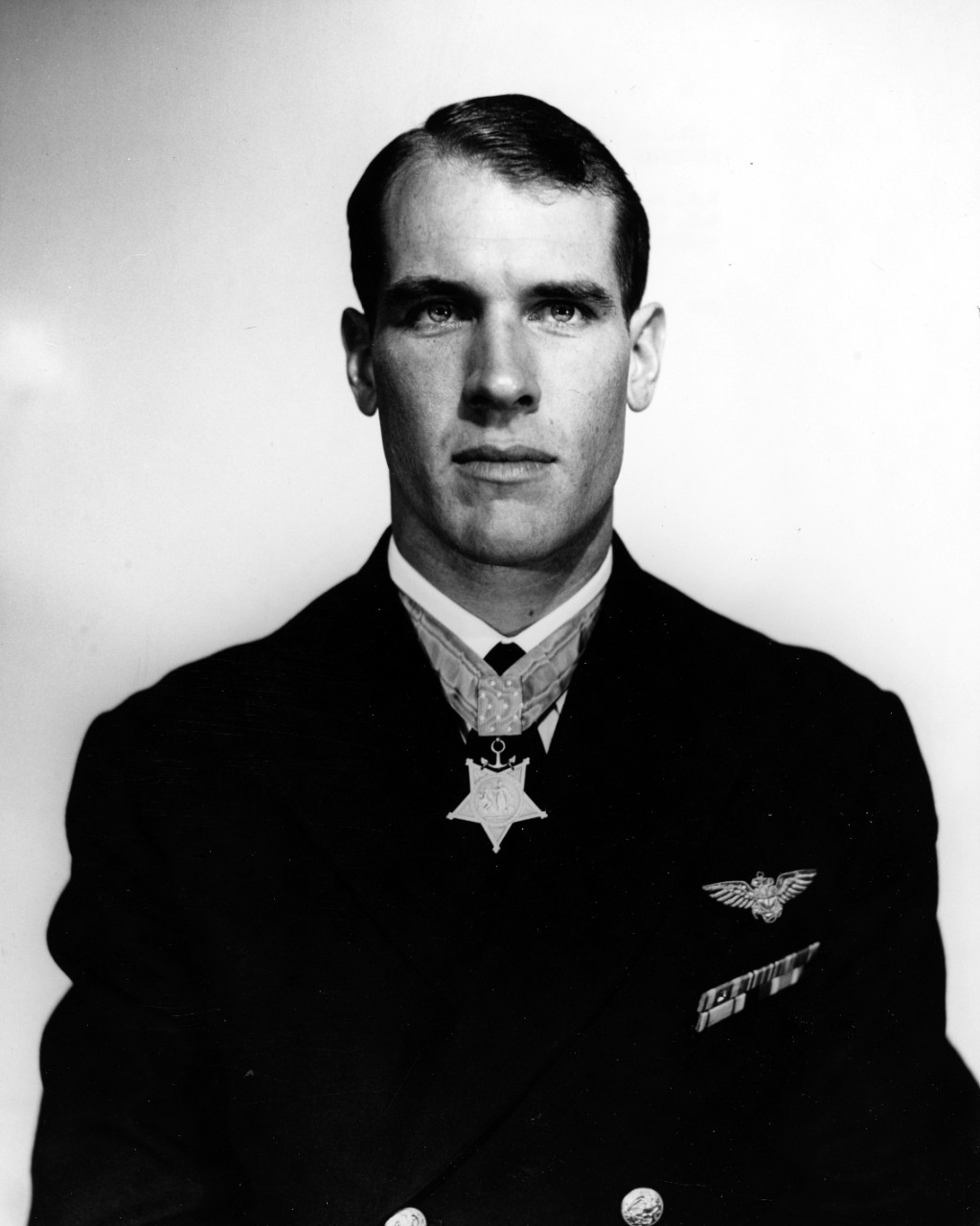 Lieutenant (j.g.) Thomas J. Hudner, Jr., after he received the Medal of Honor for his actions during the Korean War.

After wading through 50 yards of waist deep snow, Hudner found Brown with a crushed leg, bleeding, trapped by a damaged instrument panel, and already suffering from the sub-zero temperatures. Hudner tried multiple times, without success, to pull Brown from the cockpit. He then began to pack snow with his bare hands into the burning engine and around Brown in an attempt to smother the flames and protect his fellow naval aviator. Hudner then waded back to his aircraft to radio that he needed an ax and a fire extinguisher. A Sikorsky Marine rescue helicopter, piloted by Lieutenant Charlie Ward, was already on the way, but had to turn back to get the requested items. As daylight quickly disappeared, the helicopter arrived at the crash site. Ward tried to put out the fire with the extinguisher, but the engine continued to relentlessly burn. Hudner took the ax to the downed aircraft, but it just bounced off it. At that point, Brown began to succumb to his injuries. His final words were, “Tell Daisy [his wife] how much I love her.” Both men continued to take turns trying to break through the aircraft’s exterior with the ax, but it did nothing but make dents. Eventually, Ward gave Hudner an ultimatum—stay or go. If he stayed, he would surely freeze to death and there wouldn’t be another rescue mission overnight. Reluctantly, Hudner evacuated with the rescue helicopter, first to a temporary Marine base at Haguru-ri, and eventually back to his ship, USS Leyte (CV-32), where he begged the command to return to the wreck site to retrieve Brown’s body. His request was ultimately denied due to the extreme enemy threat in the vicinity of the wreck site.

A few days later, Brown’s squadron, Fighter Squadron 32 (VF-32), carried out a “warrior funeral” to destroy the two aircraft—keeping them out of enemy hands. Before dropping napalm, Brown was observed to still be in the cockpit, but his flight gear and clothes had been taken. One of the pilots recited the Lord’s Prayer as the bombs were dropped. Brown was the first African American, U.S. Navy aviator killed in action.

Brown was posthumously awarded the Distinguished Flying Cross, the Air Medal, and the Purple Heart. Ward received the Silver Star for volunteering for the dangerous rescue mission. On 13 April 1951, Hudner received the Medal of Honor during a ceremony hosted by President Harry S. Truman.

While at the White House, Hudner met Brown’s widow, Daisy, and the two remained in contact throughout their lives until she died in 2014. Hudner would serve 27 years in the Navy before he retired from naval service. After serving the Navy, Hudner found a new passion and was extremely active in the veteran’s community of Massachusetts, even going so far as to serve as the commissioner of the Commonwealth of Massachusetts Department of Veterans’ Services from 1991 to 1999. Hudner passed away on 13 November 2017 at his home in Concord, Massachusetts. He was 93 years old. Hudner was the last living Navy recipient of the Medal of Honor from the Korean War.

“The President of the United States, in the name of Congress, takes pleasure in presenting the Medal of Honor to Lieutenant (junior grade) Thomas Jerome Hudner, Jr., United States Navy, for conspicuous gallantry and intrepidity at the risk of his life above and beyond the call of duty as a pilot in Fighter Squadron THIRTY TWO (VF-32), attached to the USS Leyte (CV-32), while attempting to rescue a squadron mate whose plane struck by anti-aircraft fire and trailing smoke, was forced down behind enemy lines near the Chosin Reservoir, North Korea, on 4 December 1950. Quickly maneuvering to circle the downed pilot and protect him from enemy troops infesting the area, Lieutenant (junior grade) Hudner risked his life to save the injured flier who was trapped alive in the burning wreckage. Fully aware of the extreme danger in landing on the rough mountainous terrain and the scant hope of escape or survival in subzero temperatures, he put his plane down skillfully in a deliberate wheels-up landing in the presence of enemy troops. With his bare hands, he packed the fuselage with snow to keep the flames away from the pilot and struggled to pull him free. Unsuccessful in this, he returned to his crashed aircraft and radioed other airborne planes, requesting that a helicopter be dispatched with an ax and fire extinguisher. He then remained on the spot despite the continuing danger from enemy action and, with the assistance of the rescue pilot, renewed a desperate but unavailing battle against time, cold and flames. Lieutenant (junior grade) Hudner’s exceptionally valiant action and selfless devotion to a shipmate sustain and enhance the highest traditions of the U.S. Naval Service.”

“The President of the United States of America takes pride in presenting the Distinguished Flying Cross (Posthumously) to Ensign Jesse Leroy Brown, United States Navy, for heroism in aerial flight as Pilot of a fighter plane in Fighter Squadron THIRTY-TWO (VF-32), attached to the USS Leyte (CV-32), in hostile attacks on hostile North Korean forces. Participating in 20 strikes on enemy troop concentrations in the face of grave hazard, at the Chosin Reservoir, Takshon, Manp Jin, Linchong, Sinuiju, Kasan, Wonsan, Chonjin, Kilchu and Sinanju during the period 12 October to 4 December 1950. With courageous efficiency and utter disregard for his own personal safety, Ensign Brown, while in support of friendly troops in the Chosin Reservoir area, pressed home numerous attacks destroying an enemy troop concentration moving to attack our troops. So aggressive were these attacks, in the face of enemy anti-aircraft fire, that they finally resulted in the destruction of Ensign Brown’s plane by anti-aircraft fire. His gallant devotion to duty was in keeping with the highest traditions of the United States Naval Service.” 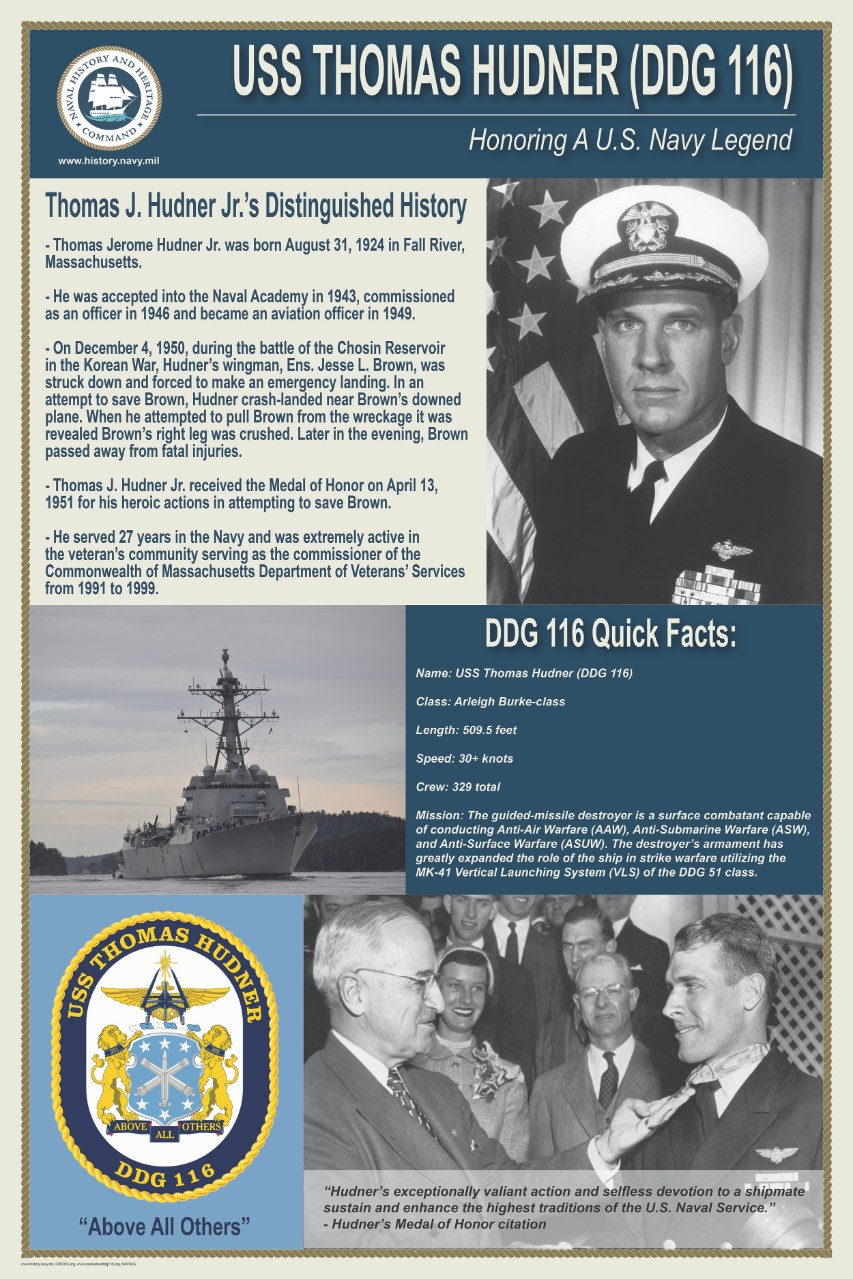 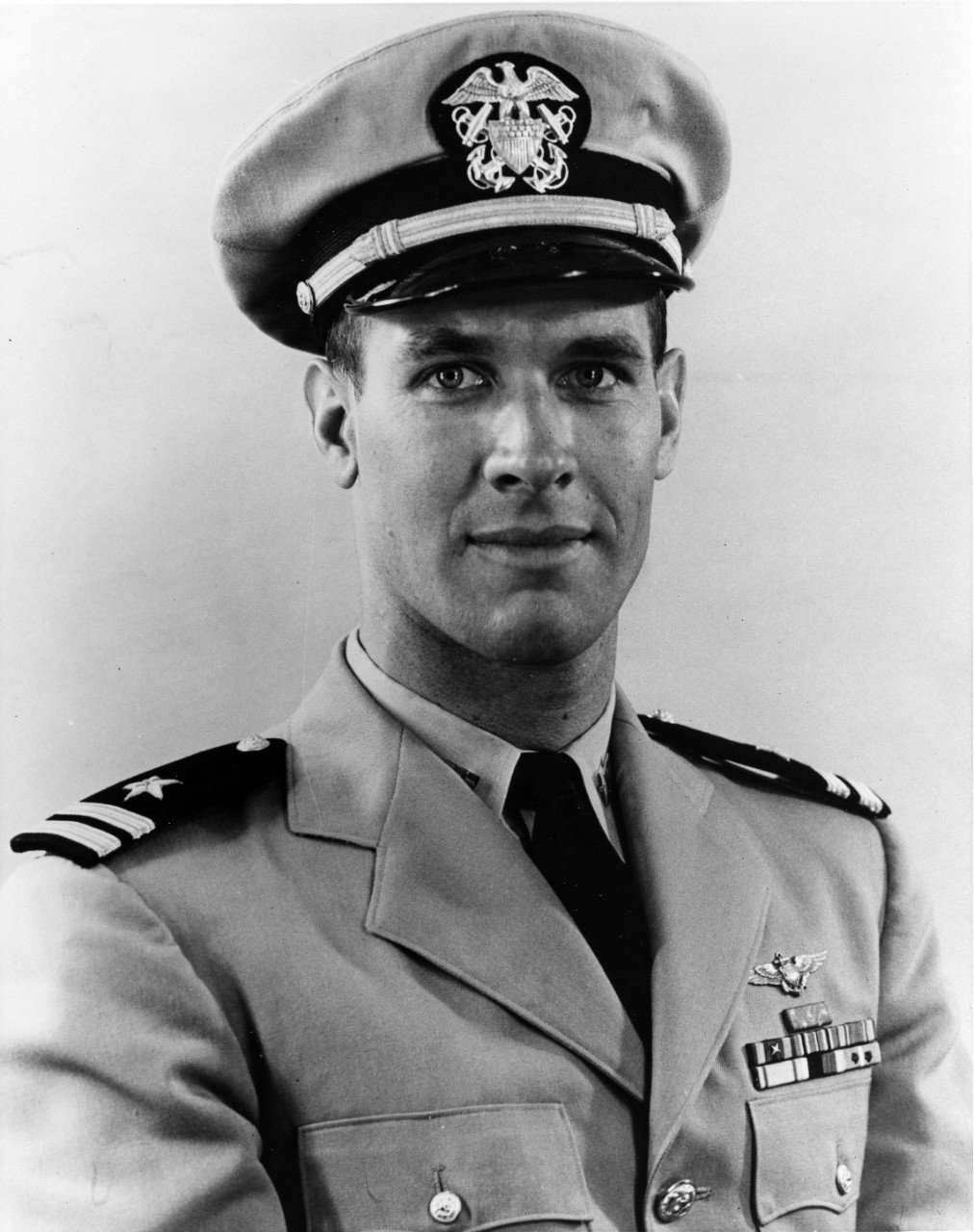 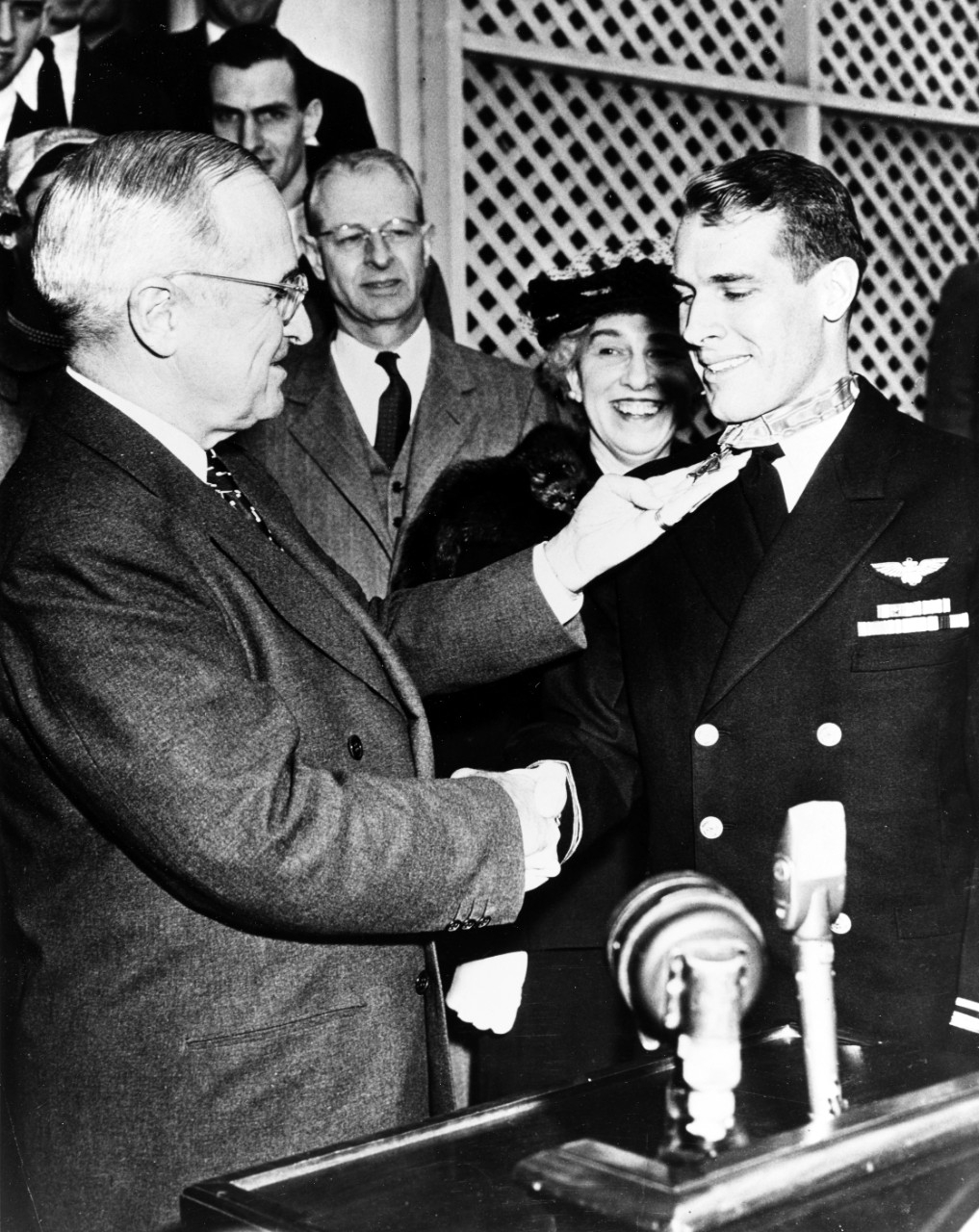 Lieutenant (j.g.) Thomas J. Hudner, Jr., was congratulated by President Harry S. Truman after he was presented with the Medal of Honor in ceremonies at the White House, 13 April 1951. National Archives photograph, 80-G-708199. 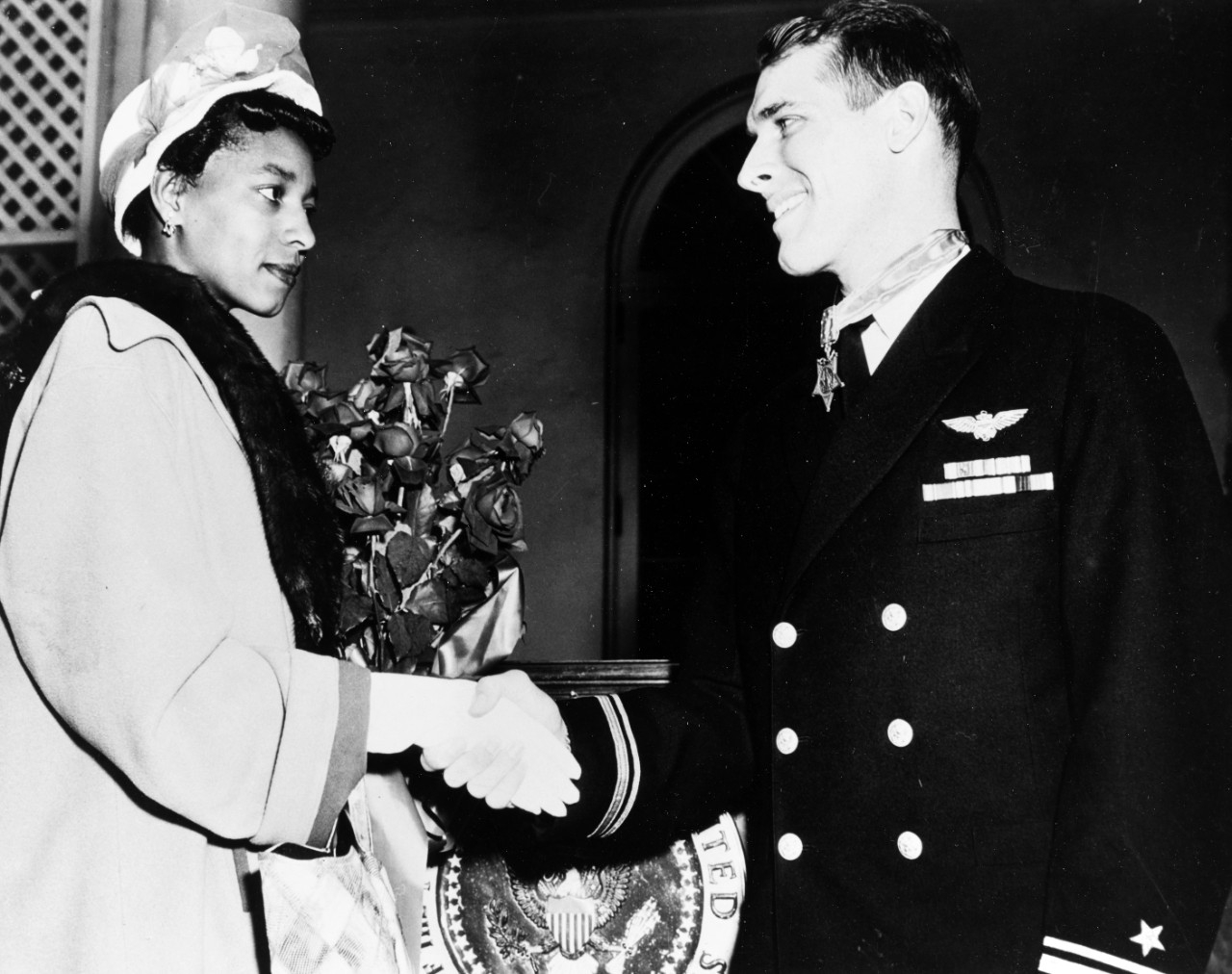 Lieutenant (j.g.) Thomas J. Hudner, Jr., was congratulated by Daisy P. Brown, widow of Ensign Jesse L. Brown, after he received the Medal of Honor from President Harry S. Truman at the White House, 13 April 1951. Hudner was awarded the nation’s highest honor for attempting to rescue Brown, who had been shot down by enemy fire near Chosin Reservoir, North Korea, 4 December 1950. 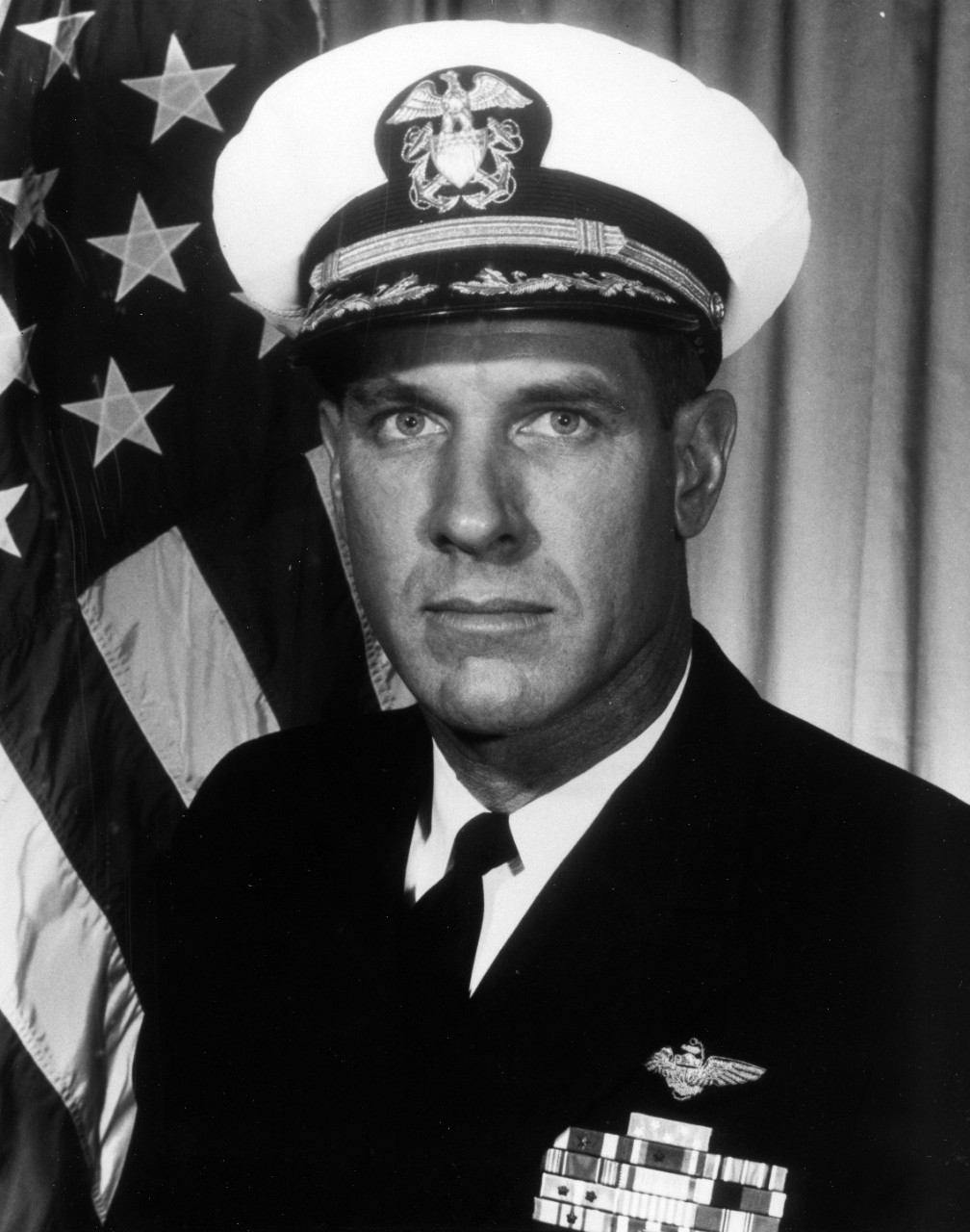 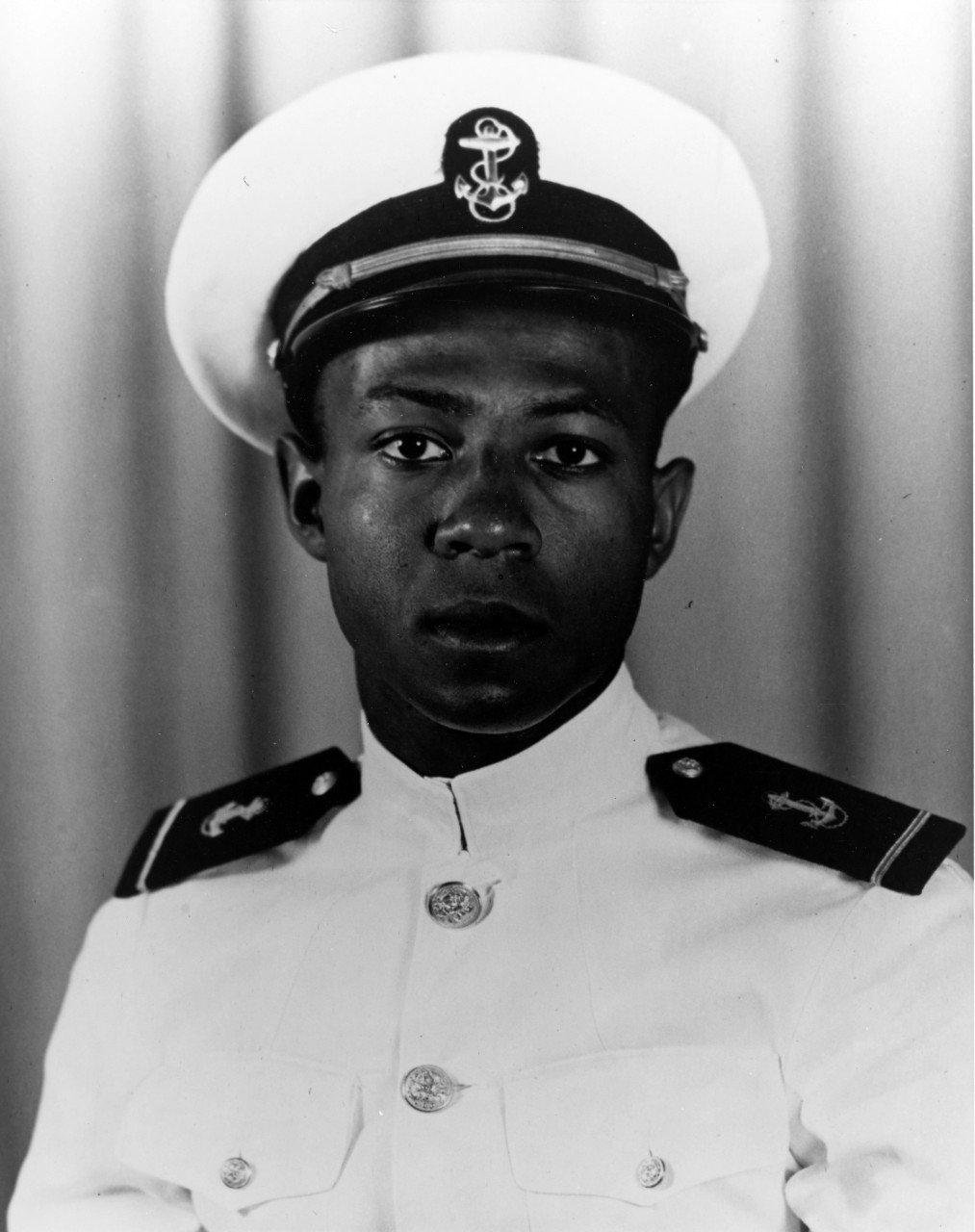 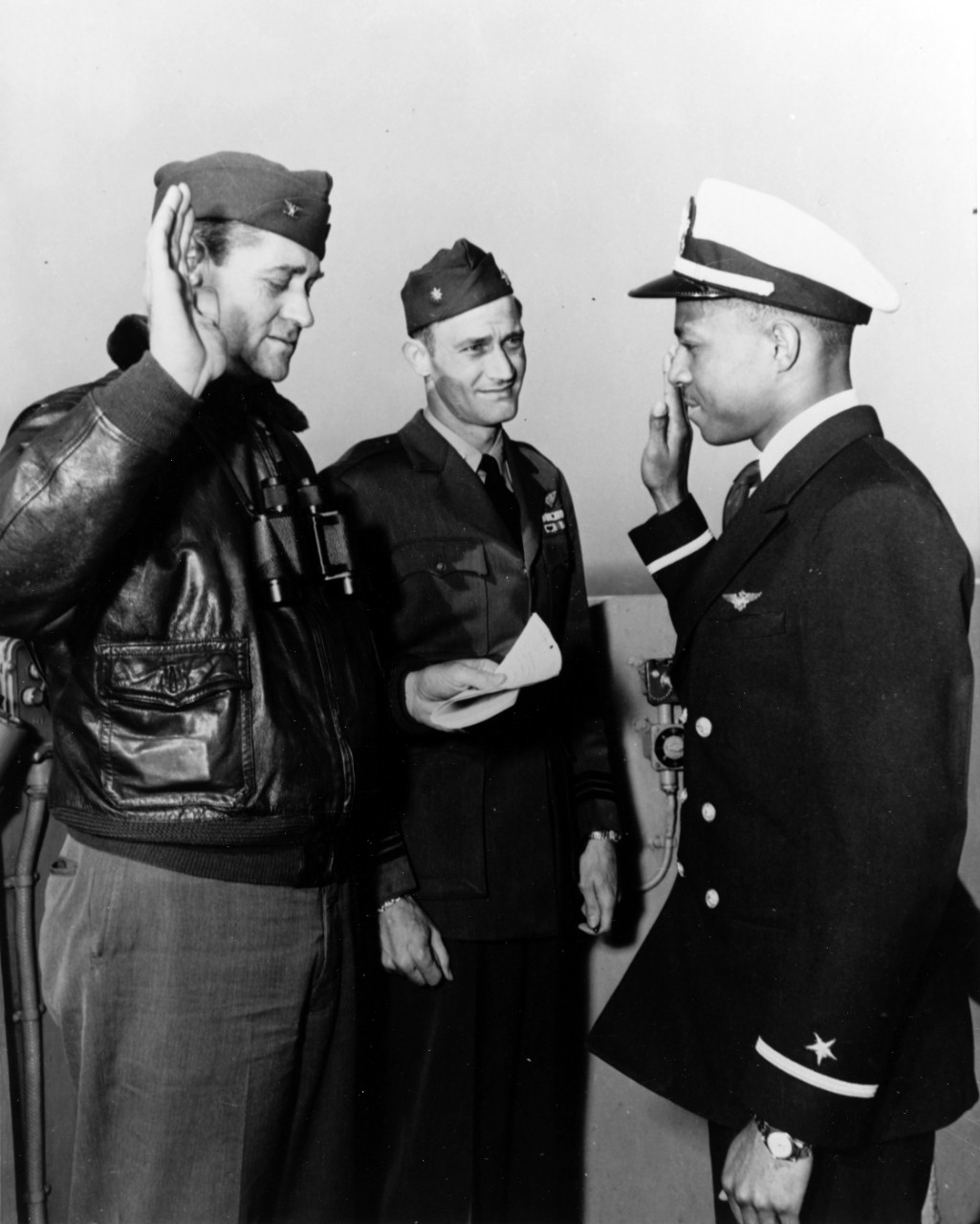 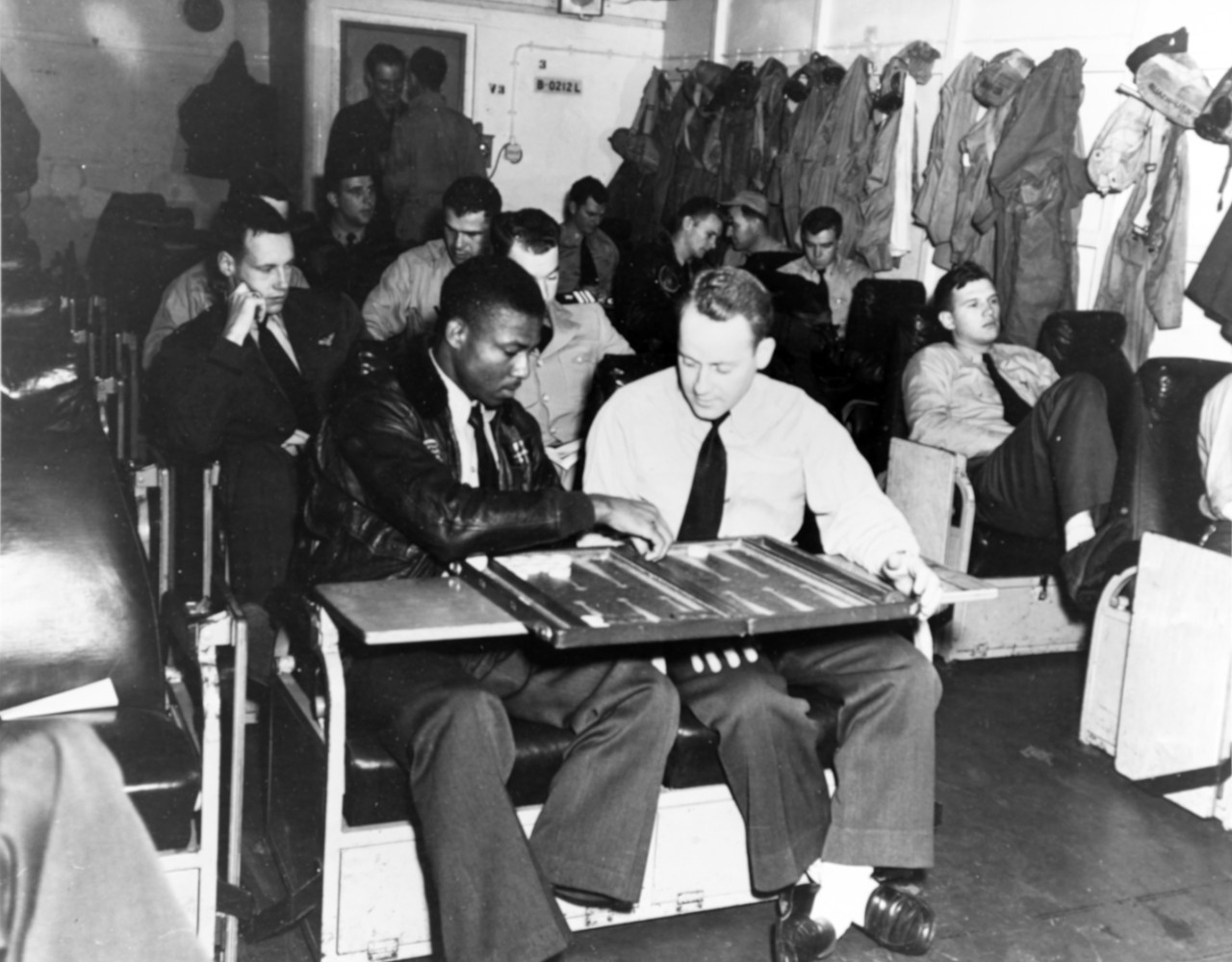 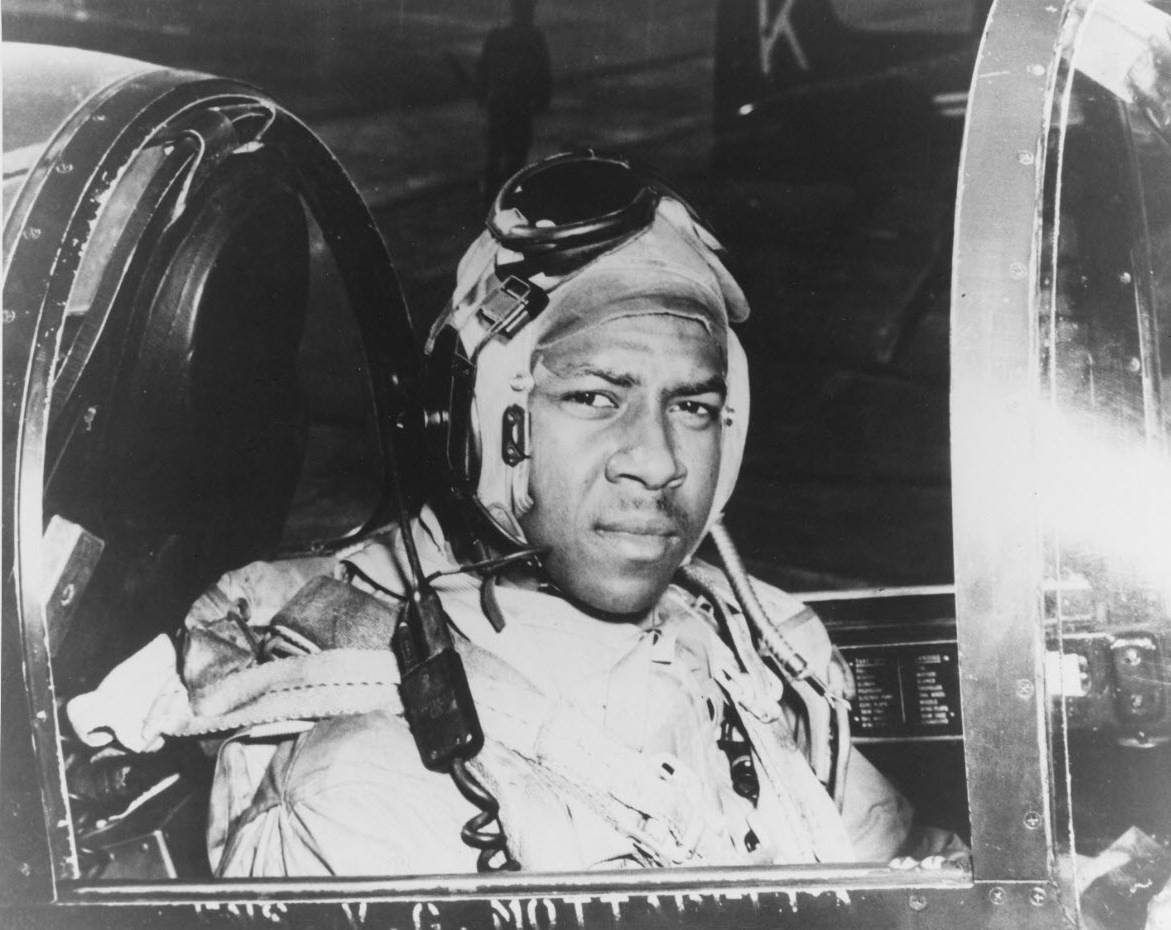