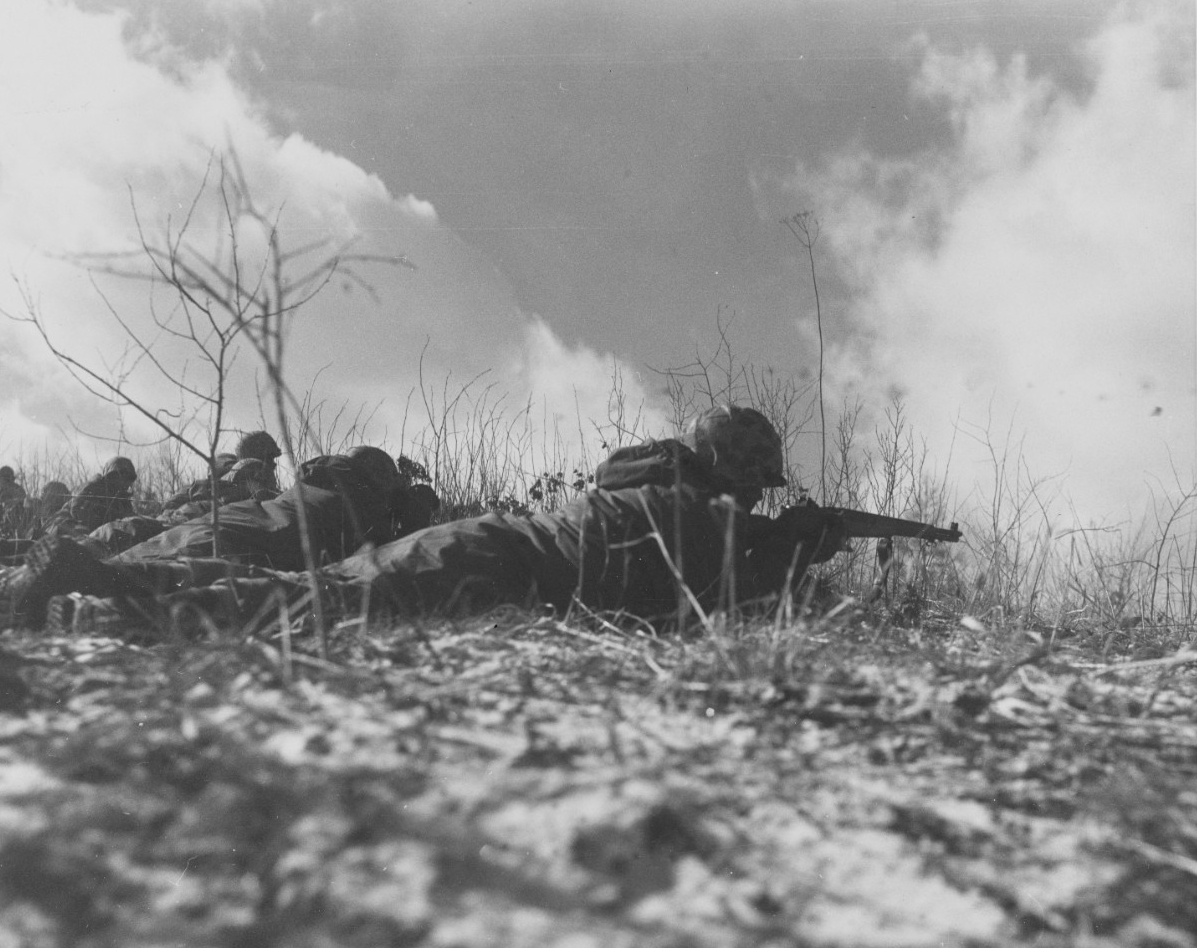 North Korea, 27 November 1950: Yudam-ni, at the western extremity of the Chosin Reservoir, was the scene of early combat in the campaign, as Chinese forces attacked the two Marine regiments there. The Marines subsequently had to fight their way back to the base at Hagaru along roads surrounded by the enemy. Note the relatively clear sky—a very rare phenomenon in operations handicapped by extreme winter weather (NH 97023).

The Battle of Chosin is illustrative of the shifting tide of the Korean War in the wake of the Chinese Communist infiltration and, then, outright invasion across the Yalu River into North Korea.

After the successful Inchon landings in August 1950, just two months prior to the confrontation with Chinese forces at the Chosin Reservoir, it appeared that the still-young conflict would end in victory for United Nations (UN) forces. General Douglas MacArthur, the commander in chief of United Nations Forces, believed that the war would be over and Communism in North Korea would be eradicated by that Christmas. However, while MacArthur was extolling his command’s successes, the Chinese Communists, in power in China for less than a year, saw their new regime increasingly threatened by the UN forces’ advances northward and felt compelled to intervene in the conflict. This would quickly and monumentally escalate and redefine the war in Korea. On 19 October, Chinese forces covertly crossed the Manchurian border into North Korea. Six days later, units from the Republic of Korea (ROK—South Korea) I Corps made first contact with Chinese forces south of the Chosin Reservoir. On 2 November, the 1st Marine Division engaged a Chinese division at Sudong and inflicted heavy casualties. At this point, the Chinese intended to lure UN forces farther north in order to inflict a crushing defeat. However, overly optimistic after his recent victories, MacArthur was initially unconvinced of the threat posed by the Chinese and continued the northward advance of the Eighth Army and ROK forces (to the west of the reservoir, toward the Yellow Sea coast) and X Corps (toward the reservoir’s eastern side).

By mid-November, an estimated 100,000 Chinese troops had infiltrated into North Korea; with surviving North Korean People’s Army (NKPA) formations, this made of a total of between 142,000 and 167,000 enemy troops facing UN forces. At this point, UN forces in North Korea had approached the southern banks of the Yalu River, which denoted the North Korea–China frontier. X Corps, which encompassed the U.S. Army’s 3rd and 7th Infantry Divisions, the 1st Marine Division, British Royal Marine Commandos, and ROK units, had been pushing north from Hamhung on the west of the Chosin Reservoir via an extremely narrow and arduous road. This road also served as the corps’ main supply route (MSR)—and was very vulnerable to enemy attacks. Moreover, it would later be the path that X Corps would be forced to take in order to evacuate over 50 miles southeast toward the port of Hungnam. Weather and topographical conditions around the reservoir made further decisive offensive action by the UN forces improbable. Temperatures were below freezing, greatly complicating treatment of the wounded and injured, and making weapons inoperative and slowing wheeled vehicular movement to a near-halt. Sleet and snow made visibility low to nonexistent, and the mountainous terrain made prospects for laying airfields other than the one still under construction to the south of the reservoir at Haguru-ri very poor. This deficit made naval close air support missions launched from the Navy’s aircraft carriers, on station off the Wonsan-Hungnam area, invaluable.

Major General Oliver P. Smith, the 1st Marine Division commander, had remained cautious during all legs of his division’s northward advance, making certain to stockpile ammo and supplies at every stage and advocating for MSR improvements. These actions were not looked upon favorably by his immediate superior, the commander of X Corps, Major General Edward M. Almond. Almond was a protegé of MacArthur, had served as his chief of staff, and was an advocate of the type of fast-paced and at times reckless operations that MacArthur often favored. This led to conflict between Almond and Smith, particularly once the operations around Chosin Reservoir had left Smith’s Marines strung out along the Hungnam–Yudam-ni road by late November.

Against increasing Chinese resistance, X Corps elements arrived in Yudam-ni on the western side of Chosin Reservoir by 25 November; an attack farther westward was planned for the 27th. Proceeding from Yudam-ni on 27 November, X Corps were met by strong Chinese units in the hills along its primary axis of advance. That night, the Chinese opened a general, broad-front offensive involving nearly 120,000 troops, which intended to encircle and destroy the UN forces around the reservoir.

Farther west, Eighth Army units, engaged against the Chinese in the Battle of Ch’ongch’on River since 25 November, were stopped in their tracks and some were overrun. The Ch’ongch’on engagements lasted until 2 December and signaled the beginning of Eighth Army’s retreat from North Korea, which was to end 120 miles south later that month, below the 38th Parallel.

X Corps forces at the reservoir now faced a different war than they had just days before. Abruptly forced into the defensive by the Chinese onslaught, they now had to fight their way southeastward through the enemy encirclement and stage a fighting retreat along their single MSR to the Wonsan and Hungnam port areas, from where they were to be evacuated by the U.S. Seventh Fleet. Fortunately, Commander Naval Forces Far East (COMNAVFE—Admiral C. Turner Joy) had prepared for this contingency. 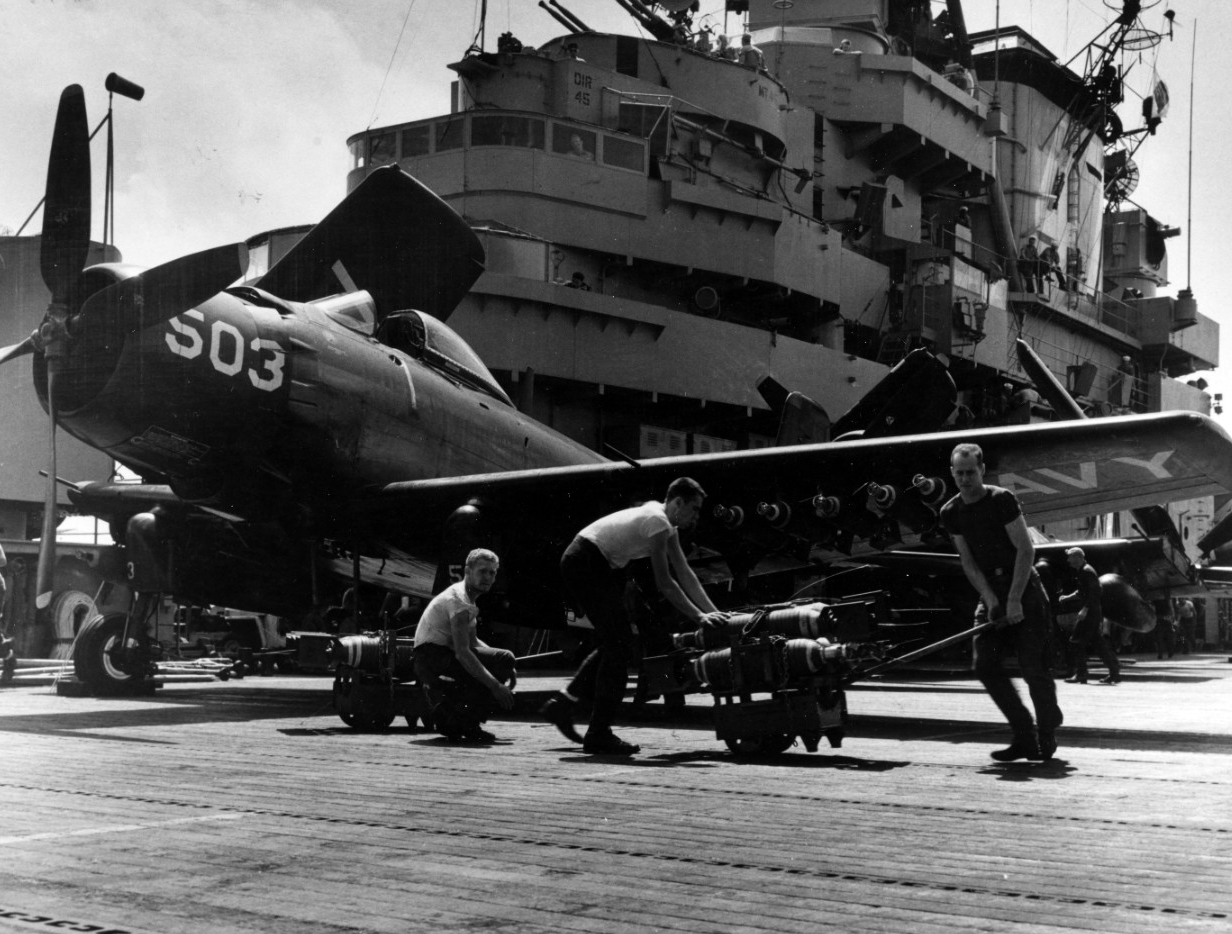 USS Philippine Sea (CV-47, 19 October 1950: Ordnancemen hauling bombs on the carrier's flight deck, preparing planes for attacks on enemy targets in Korea. A Douglas AD-4 Skyraider of Attack Squadron 115 (VA-115) is behind them, with small bombs on its wing racks (80-G-420919).

Admiral Joy had a history of practicing such foresight. When the Korean War broke out on 25 June 1950, he expressed concern over his naval forces being inadequate for the challenges posed by operations around the Korean peninsula. This admonition, along with the escalation of the conflict, led to a rapid increase in UN naval assets. The success of the amphibious landings at Inchon was largely the result of Joy’s calmness- and confidence-inspiring leadership, which also served to prepare UN naval forces for the full-scale Chinese intervention in November.

In response to X Corps’ retreat from Chosin, half of Task Force 90, COMNAVFE’s amphibious force, was deployed to the Hungnam area for evacuation and support operations. Aircraft from Task Force 77, COMNAVFE’s carrier force, had already been flying patrols along a 15-mile-long sector in the Sea of Japan just below the Manchurian border since 24 November, but, as the Chosin situation deteriorated, this area was expanded southward.

Although these armed reconnaissance operations were important, Vice Admiral Arthur D. Struble, commander of Seventh Fleet, strongly advocated employing extensive close air support to UN ground forces by aircraft from Task Force 77’s two fast carriers. These missions commenced on 28 November. Initially, there were only two U.S. Navy fleet carriers, Philippine Sea (CV-47) and Leyte (CV-32), available to Seventh Fleet’s East Coast Task Force for operations around the Chosin Reservoir. On 29 November, COMNAVFE confirmed that close air support had priority, especially in the X Corps zone surrounding the reservoir. At this point, due in part to shorter flight distances, naval close air support operations around the reservoir had been more successful than missions in support of Eighth Army toward the west, leading Admiral Struble to redeploy his assets accordingly. (Nonetheless, naval aviation from the West Coast Task Force in the Yellow Sea, which included smaller British and Australian carriers, continued to support Eighth Army operations.) On 5 December, Princeton (CV-37) arrived on station to augment the East Coast Task Force, followed by Valley Forge (CV-45) on 23 December. Both carriers deployed from the U.S. West Coast. In the case of Valley Forge, the deployment abruptly preempted an overhaul in San Diego that had been previously scheduled after the ship’s operations off Korea from August through early November. Princeton, in turn, had been recommissioned that August, embarked a Naval Reserve air wing, and was largely manned by recalled reservists.

In addition to Navy air wings, Marine Corps squadrons flew from the escort carriers Badoeng Strait (CVE-116) and Sicily (CVE-118), and from airfields at Hamhung (Yonpo) and Wonsan. Between 27 November and 5 December, the rough, unfinished expeditionary airfields at Haguru-ri and Koto-ri, both in localities south of the reservoir—and both sites of significant clashes between the 1st Marine Division and Chinese forces—were utilized for casualty evacuation and logistical support to the extent that the weather conditions (sub-freezing temperatures, high winds, snow, low cloud ceiling) allowed.

X Corps’ actual breakout from the Chosin encirclement began on 6 December, with the 7th Marine Regiment in the vanguard south of Haguru-ri. The narrow route southeast to the evacuation ports, surrounded by high ground that favored the pursuing Chinese, was characterized by incessant and fierce fighting along its flanks as Marine Corps, Army, and ROK units retreated, interspersed with hundreds of civilian refugees. In many situations, naval close air support, prioritized by COMNAVFE to support the Chosin operations, inflicted heavy casualties on the Chinese and was key in maintaining the retreat’s momentum. Task Force 77 also provided airlift for supply drops to X Corps. The proximity of the carriers off the coast—the nearest U.S. Air Force squadrons were based 200 miles to the south—was a key factor in sustaining the high operations tempo. However, the weather conditions impacted the operations of friend and foe alike. On 8 December, between Koto-ri and Chinhung-ni, likely the most difficult stretch of the withdrawal due to the extreme narrowness of the cliffside road and blown bridges, zero visibility and near-artic cold precluded any sorties, but also slowed the pursuing Chinese, many of whom froze to death.

The 1st Marine Division reached Hungnam on 11 December, and evacuation by Task Force 90 ships commenced. Meanwhile, ROK I Corps, ROK Marines, and the U.S. 3rd and 7th Infantry Divisions established a defensive perimeter around the port area, fighting off Chinese probing attacks. These were broken up by naval gunfire support from Task Force 90. The evacuation continued until Christmas Eve (U.S. 7th Infantry Division units were the last to embark). Port facilities were blown up to deny their use to the enemy. In roughly two weeks, the nearly 200 ships of Task Force 90 evacuated 105,000 military personnel, 91,000 Korean civilians, 17,500 tanks and vehicles, and 350,000 tons of supplies to South Korea.

Many of the actions during the Battle of Chosin and subsequent Hungnam evacuation, operations that were carried out under extemely difficult conditions, were and remain benchmarks for the professionalism, flexibility, and tenacity of the U.S. sea services—U.S. Navy and U.S. Marine Corps. The 1950 winter in Korea was one of the coldest winters in recorded weather history to that point, and, coupled with the onslaught of an implacable enemy, could have made a successful retreat and evacuation impossible. However, the “Chosin few” on the ground, Navy and Marine aviators in the air, and the Seventh Fleet Sailors steadfastly providing fire and logistics support off the North Korean coast made it possible. 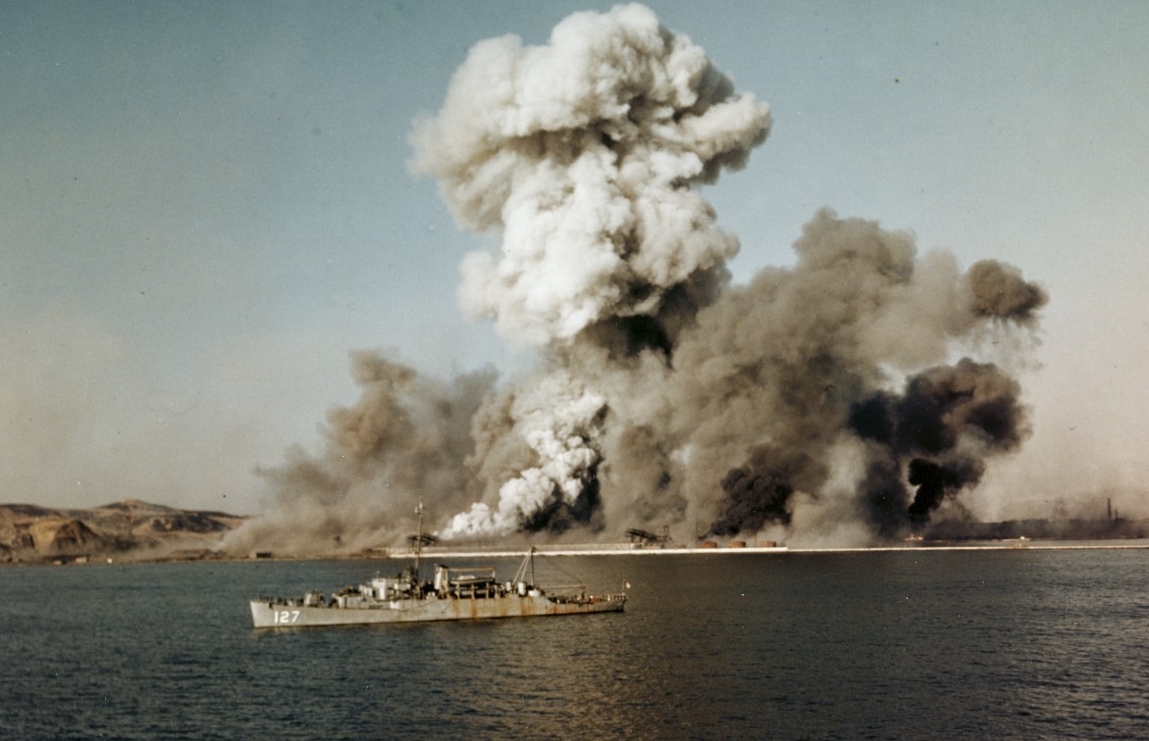 Smoke rises over Hungnam's port area, as facilties and remaining UN supplies are blown up on the final day of evacuation operations, 24 December 1950. USS Begor (APD-127) is in the foreground (80-G-K-11771).