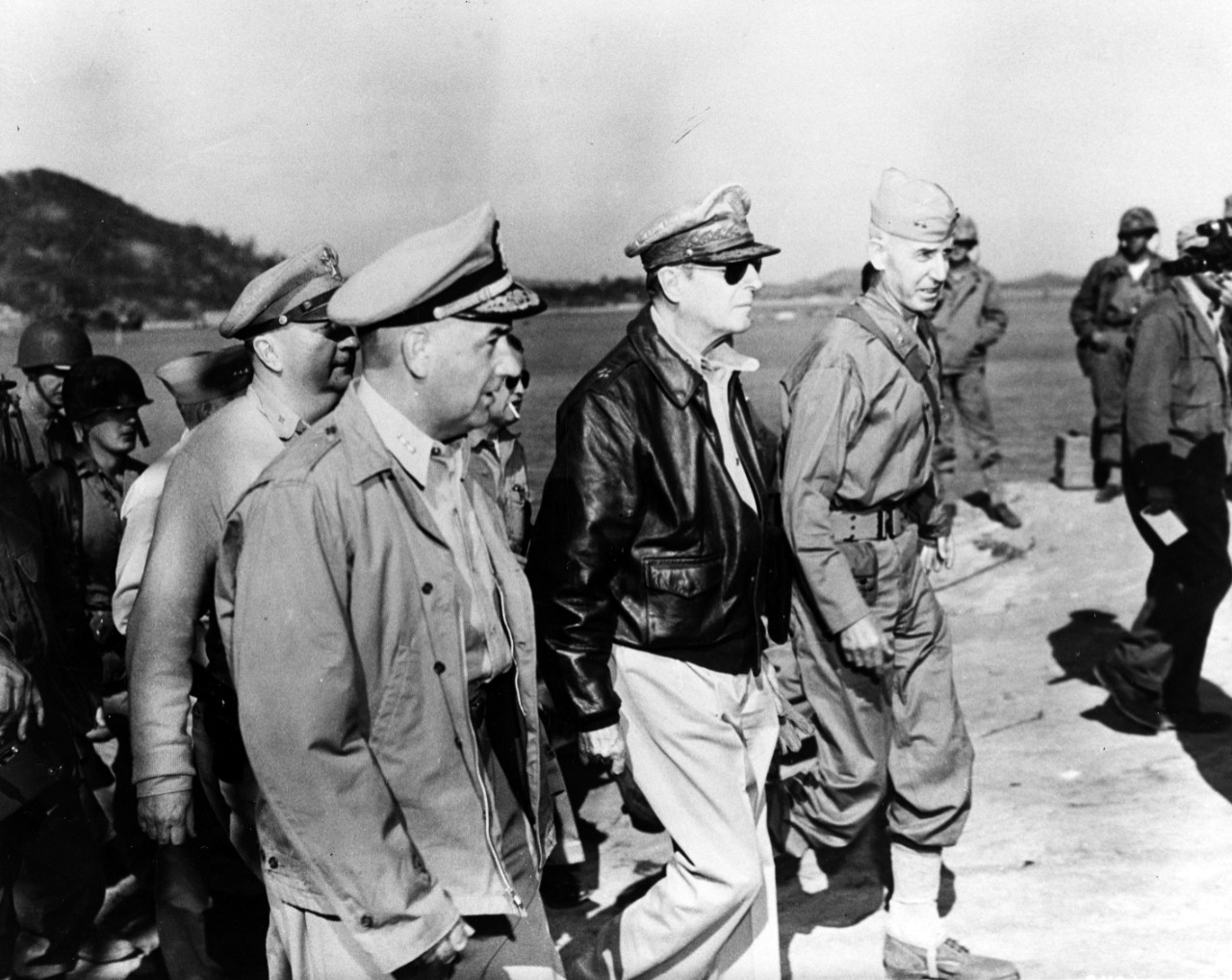 Operation Chromite was the UN assault designed to force the North Korea People's Army (NKPA) to retreat from the Republic of (South) Korea. On 25 June 1950 the NKPA invaded South Korea, launching the first major armed conflict of the Cold War.

Post-WWII defense cutbacks weakened U.S. armed forces, but U.S. response to the invasion across the 38th parallel dividing North and South Korea was supported by UN allies. Although the efforts of the U.S. Eighth Army and Republic of Korea (ROK) troops in central South Korea slowed but could not stop the invading force, a defensive perimeter did hold around the port of Pusan. General of the Army Douglas A. MacArthur, the U.S. Commander in Chief, Far East, and Commander in Chief, United Nations Command (CINCUNC), persuaded his superiors in Washington to approve his plan for an amphibious assault at Inchon, a major port 110 miles behind enemy lines on South Korea's west coast; the landing would force the NKPA to withdraw or risk destruction. MacArthur's plan was to advance from Inchon to capture the nearby air base at Kimpo, and then liberate the NKPA-occupied South Korean capital of Seoul, which was also the key link in the North Korea logisitical support network.

The success of MacArthur's plan was reliant on a strong and coordinated sea, air, and land force. The Inchon invasion demonstrated how naval forces can be a decisive factor in littoral operations. The 230 ships of Vice Admiral Arthur D. Struble's Joint Task Force (JTF) 7, with the aid of Royal Navy and other Allied warships, established superiority in the Yellow Sea as well as the air over it. The continued presence of U.S. and Allied naval forces acted as a deterrent to Soviet and/or Chinese intervention. The element of surprise was essential to Operation Chromite.

By 19 September, the Marines had captured Kimpo air base, into which flowed Marine close support aircraft and U.S. Air Force supply transports. U.S. Army troops advanced from the beachhead and linked up with their comrades advancing north from the Pusan perimeter. Marine, Army, and South Korean troops captured Seoul on 28 September 1950.

Assault from the Sea: The Amphibious Landing at Inchon, by Curtis A. Utz

Inchon Before Chromite: A one-page fact sheet on the evacuation of civilians prior to the Inchon invasion. 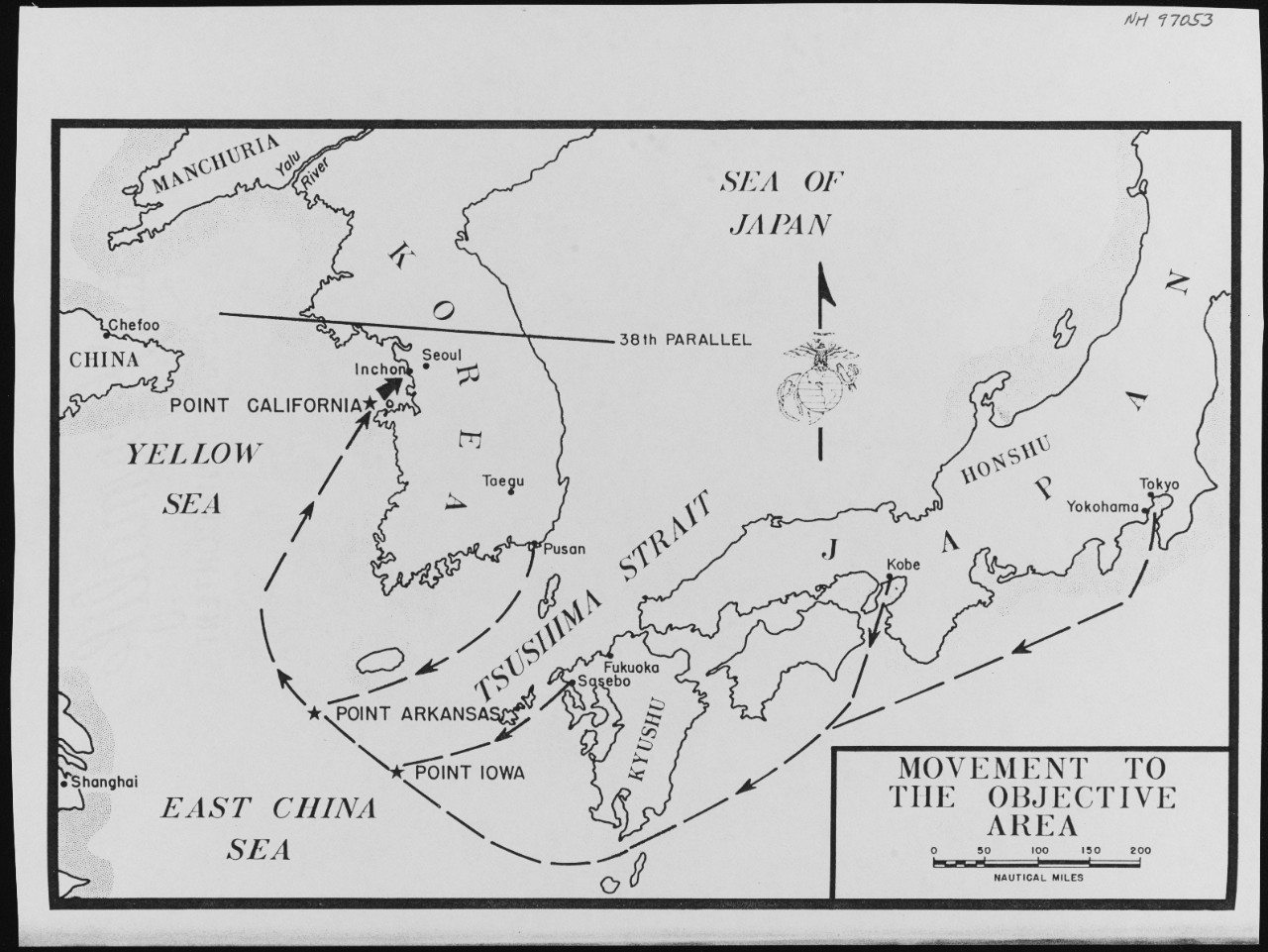 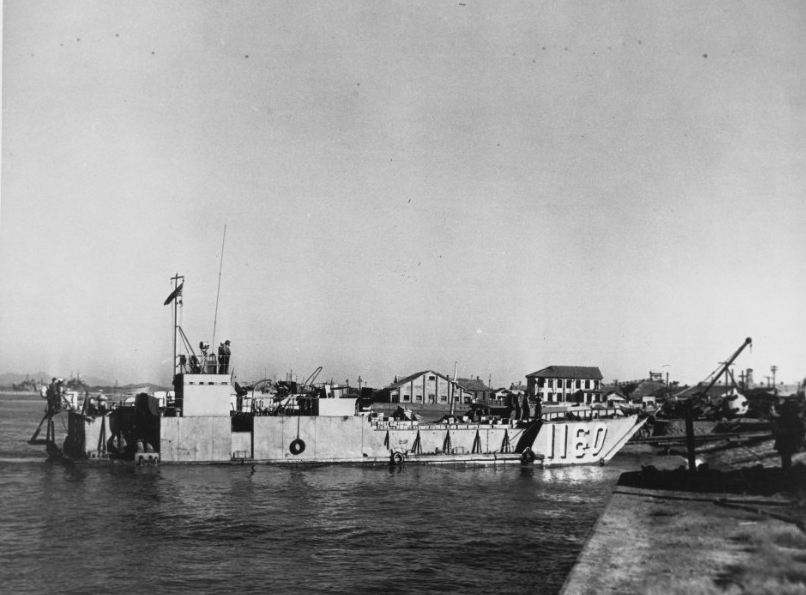 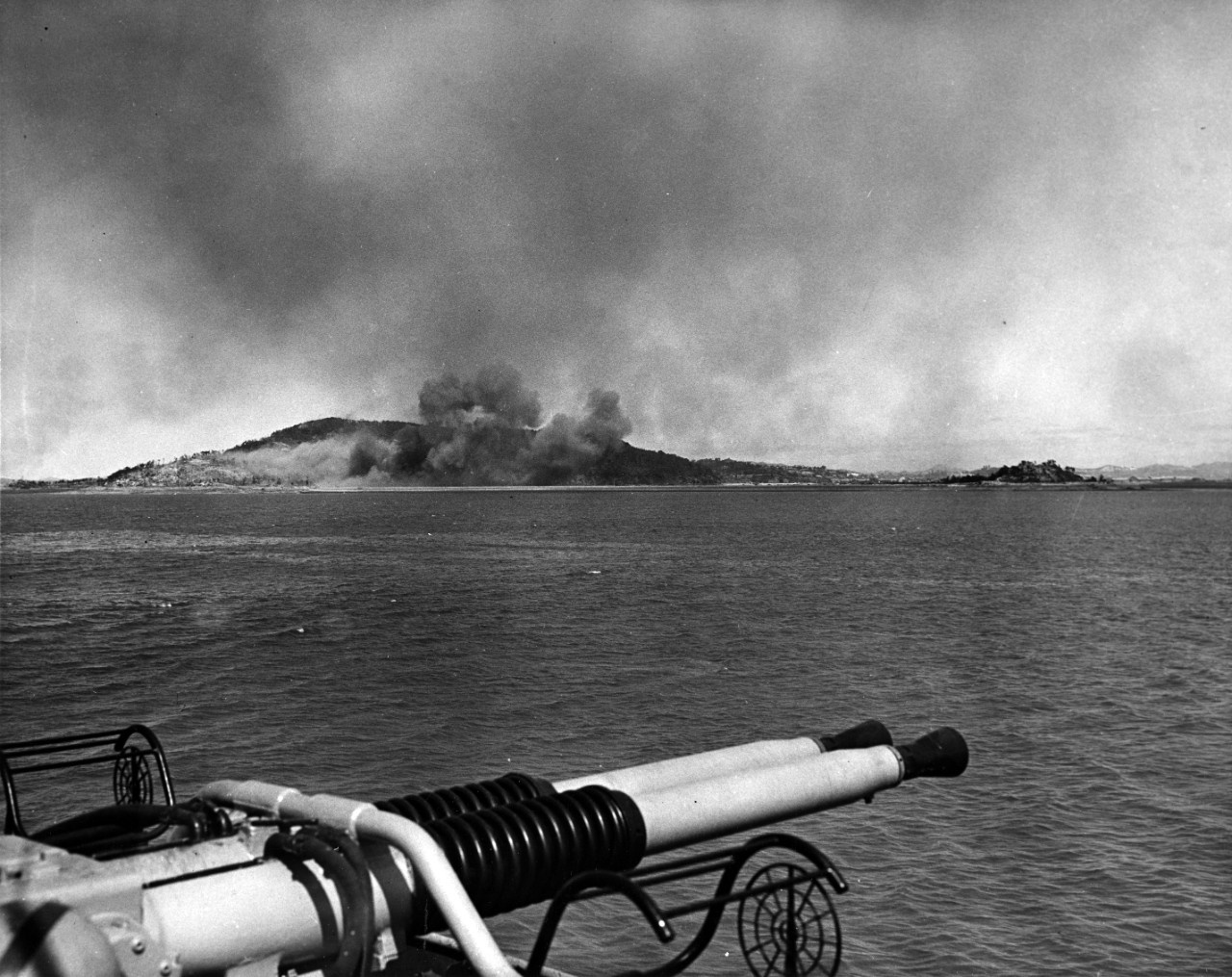 Wolmi-Do island under bombardment on 13 September 1950, two days before the landings at Inchon. Photographed from USS Lyman K. Swenson (DD-729), one of whose 40mm gun mounts is in the foreground. Sowolmi-Do island, connected to Wolmi-Do by a causeway, is at the right, with Inchon beyond. Official U.S. Navy Photograph, now in the collections of the National Archives. (80-G-420044) 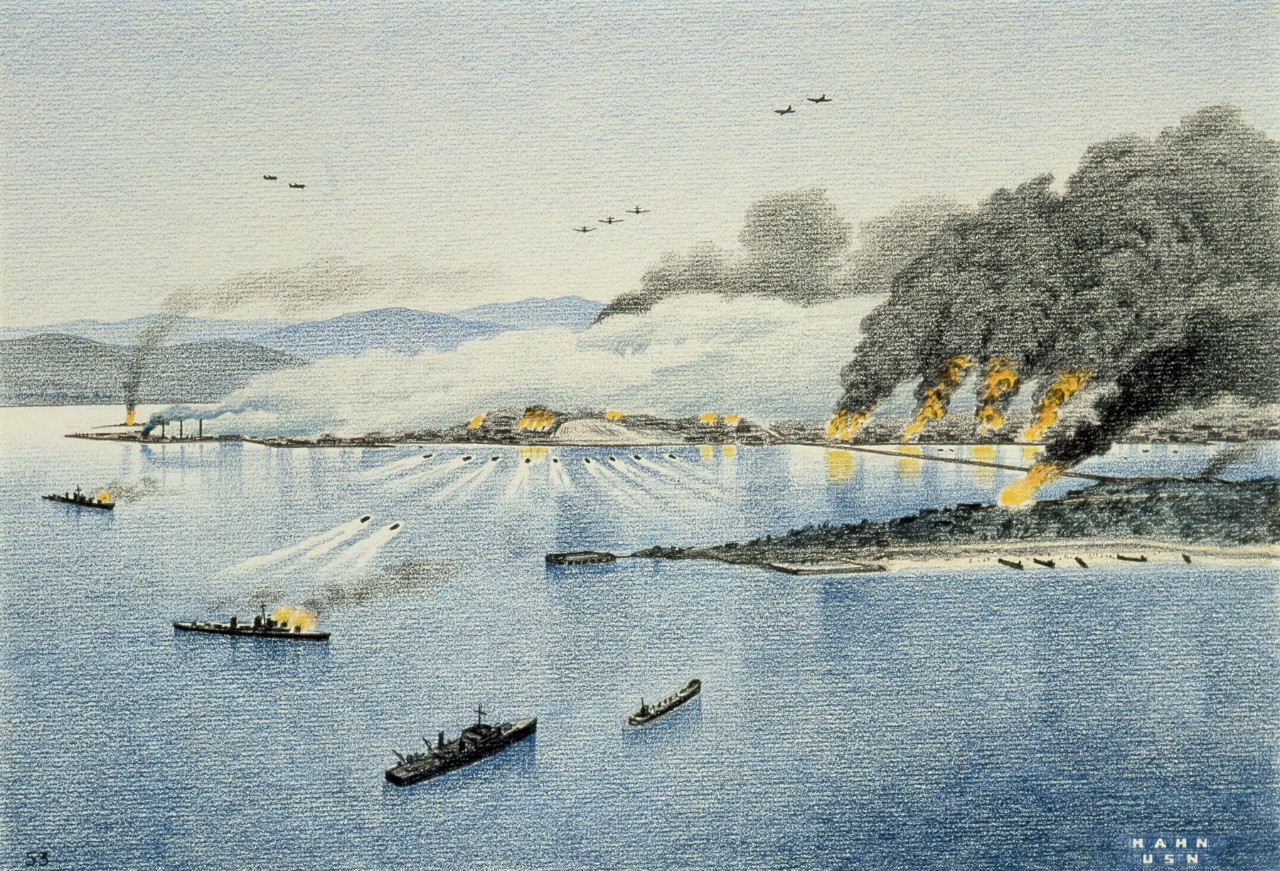 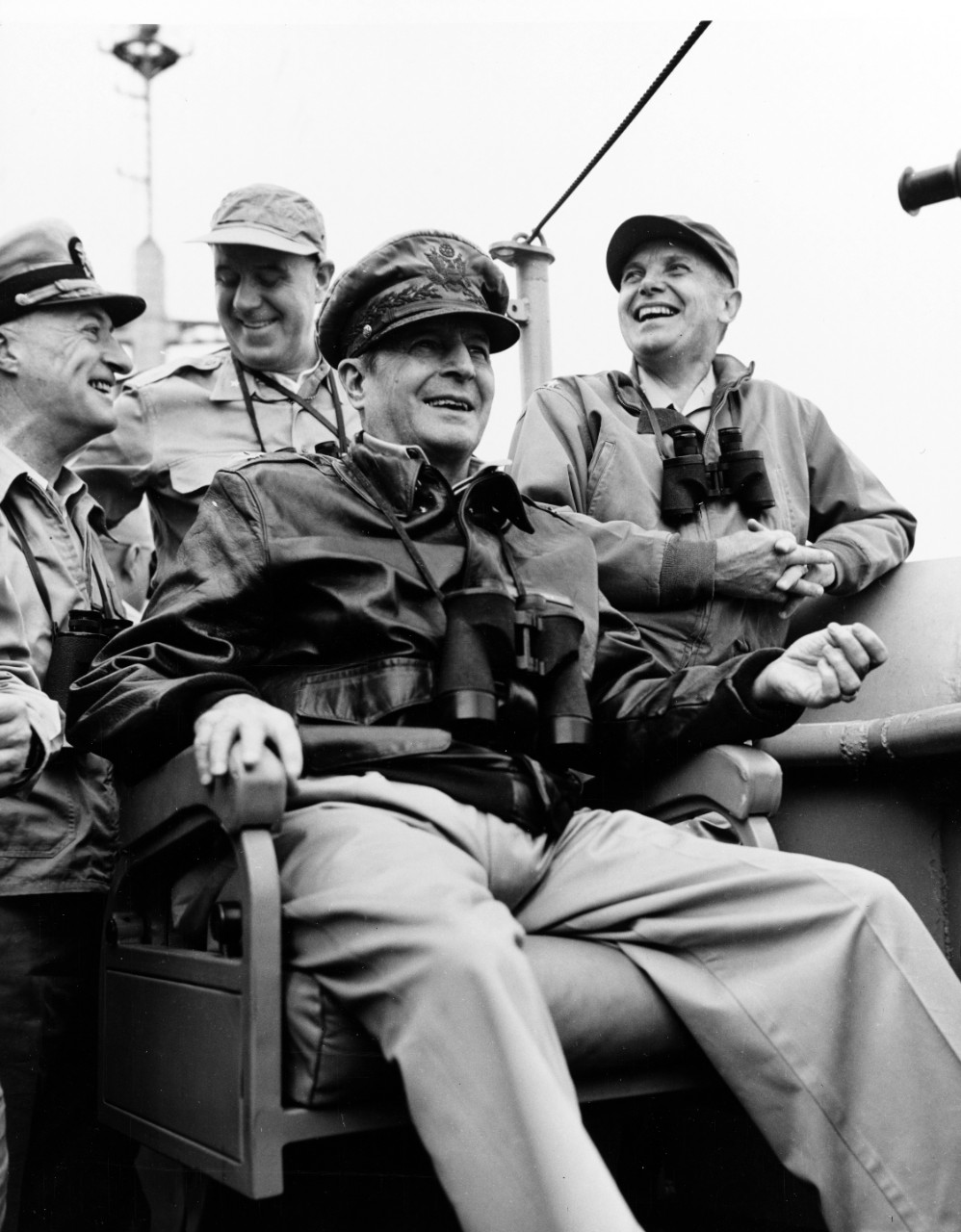 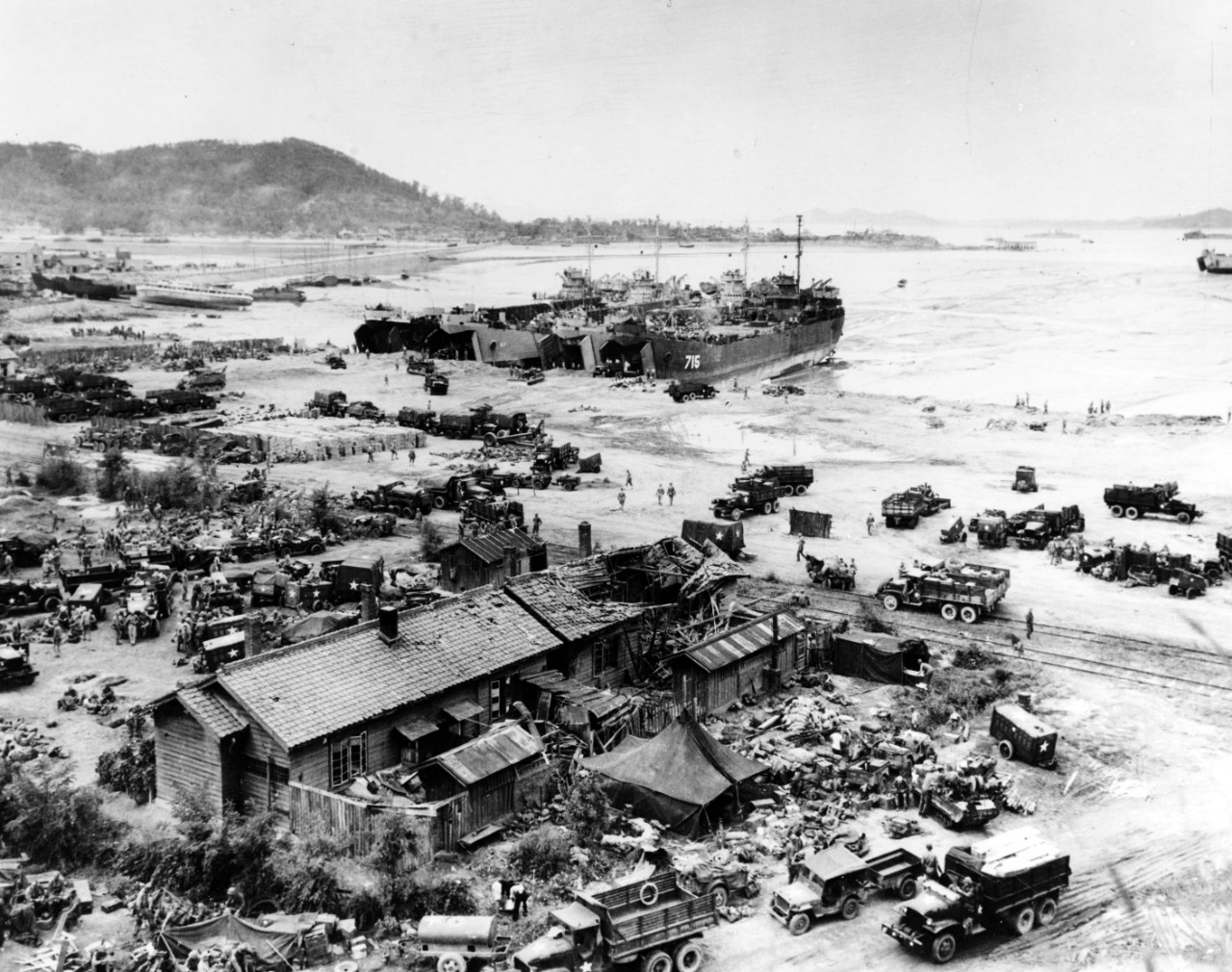 Four LSTs unload men and equipment while high and dry at low tide on Inchon's Red Beach, 16 September 1950, the day after the initial landings there. LST-715 is on the right end of this group, which also includes LST-611, LST-845 and one other. Another LST is beached on the tidal mud flats at the extreme right. Note bombardment damage to the building in center foreground, many trucks at work, Wolmi-Do island in the left background and the causeway connecting the island to Inchon. Ship in the far distance, just beyond the right end of Wolmi-Do, is USS Lyman K. Swenson (DD-729). Official U.S. Navy Photograph, now in the collections of the National Archives. (80-G-420027) 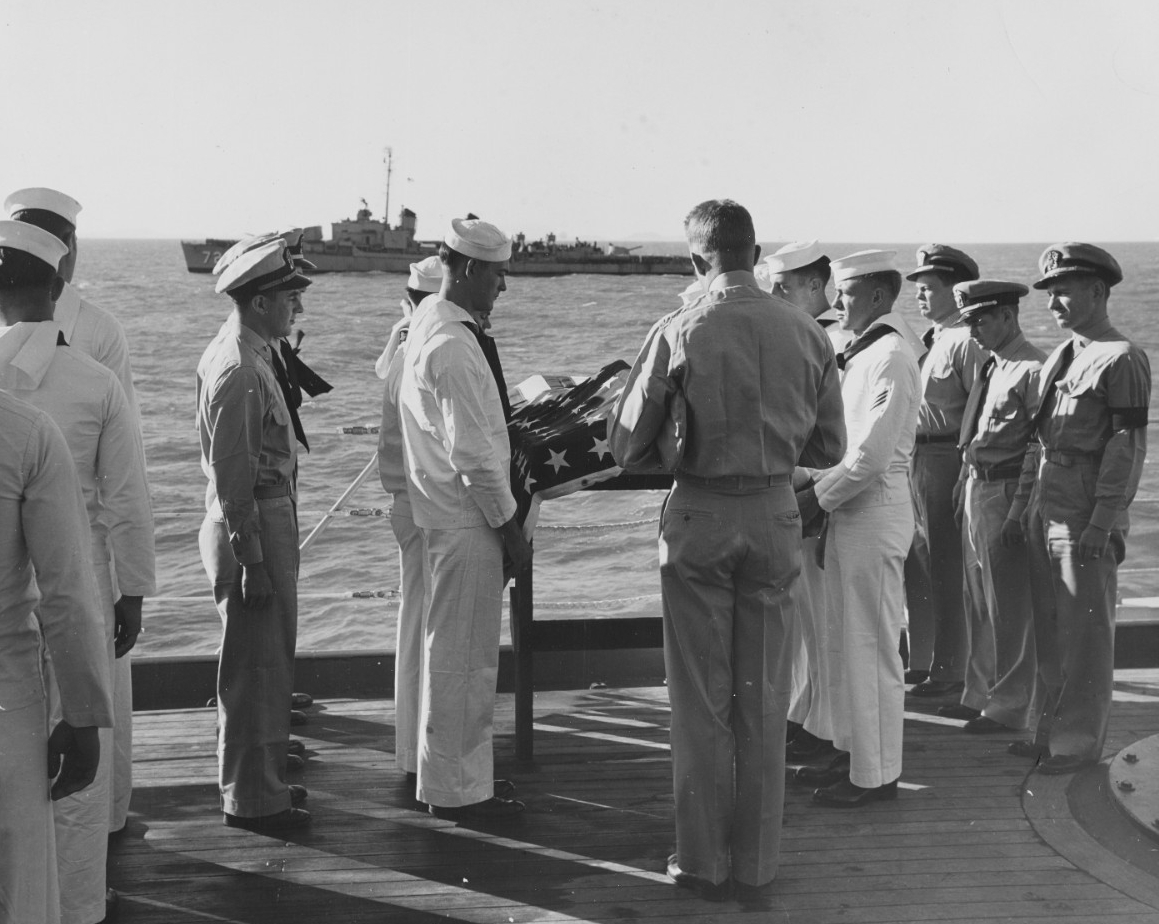 A Chaplain reads the Last Rites service as Lieutenant (Junior Grade) David H. Swenson is buried at sea from USS Toledo (CA-133), off Inchon, Korea. He had been killed by North Korean artillery while his ship, USS Lyman K. Swenson (DD-729) was bombarding enemy positions on Wolmi-do island, Inchon, on 13 September 1950. Lyman K. Swenson is in the background, with her crew at quarters on deck. Official U.S. Navy Photograph, from the All Hands collection at the Naval History and Heritage Command. (NH 96980)