BOSTON – More than 800 family, friends, and active duty and retired service members gathered in Concord, Mass. Nov. 16 to pay their final respects to Capt. Thomas J. Hudner, Jr., who earned the Medal of Honor during the Korean War. 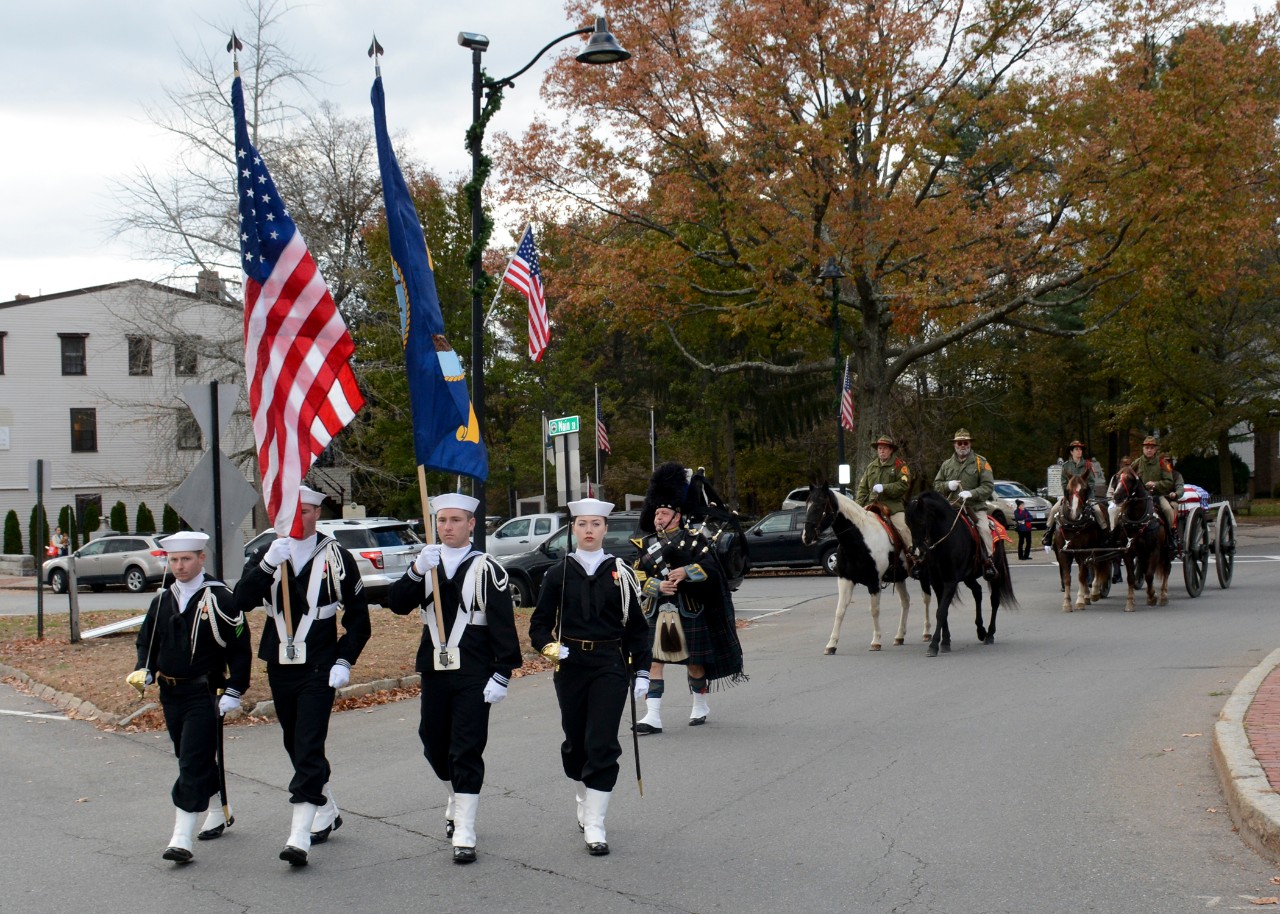 Believed by many to be a man who embodied the ethos of the United States Navy, Hudner was accepted into the Naval Academy in 1943, commissioned as an officer in 1946, and became an aviation officer in 1949.

On Dec. 4, 1950, Hudner and his squadron were providing air support to American troops during the battle of the Chosin Reservoir. One of Hudner’s squadron mates, Ensign Jesse L. Brown, the first African-American to be trained as a naval aviator, was shot down by enemy anti-aircraft fire.

Hudner saw that Brown was still alive in the wreckage and, fearing that if he didn’t land, Brown would succumb to his wounds or suffer at the hands of the enemy. In an effort to render aid to a fellow aviator, Hudner crash-landed his own aircraft near Brown’s downed plane.

As soon as Hudner dropped his flaps and made his wheels up hard landing, he quickly made his way to Brown. Hudner’s attempts to pull Brown out of the wreckage revealed Brown’s right leg was crushed under the damaged instrument panel. While Brown drifted in and out of consciousness, Hudner kept trying to free his fellow aviator, all the while packing snow into the still-smoking engine. 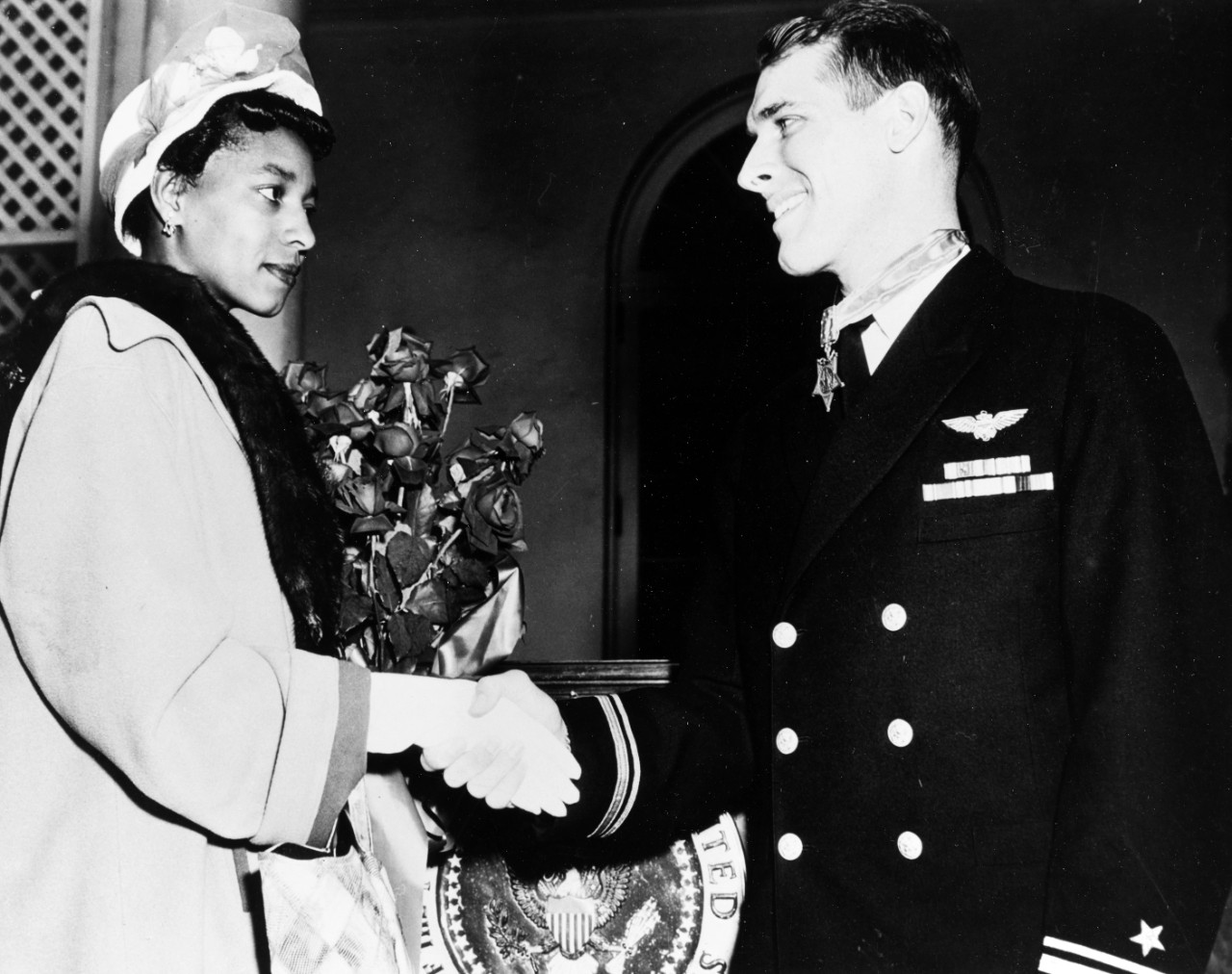 Title: Lieutenant (Junior Grade) Thomas J. Hudner, USN
Description: Is congratulated by Mrs. Daisy P. Brown, widow of Ensign Jesse L. Brown, after he received the Medal of Honor from President Truman at the White House, 13 April 1951. LtJG Hudner was awarded the medal for attempting to rescue Ensign Brown, who had been shot down by enemy fire near the Chosin Reservoir, North Korea, on 4 December 1950. Official U.S. Navy Photograph, now in the collections of the National Archives.

By the time a U.S. helicopter arrived to help, Brown was unconscious. For almost 45 minutes, Hudner and the helicopter pilot used an ax to hack away at the damaged plane but they could not free Brown. Even a plan to amputate the leg with a knife wouldn’t work because they had no firm footing due to the snow. As nightfall approached with the corresponding drop in temperature, Hudner and the helicopter pilot reached a grim decision to leave Brown behind since the pilot would be unable to fly in the dark. Brown was already near death and died shortly afterward.

Hudner’s attempt to save Brown came just two years after the Navy had desegregated. For the rest of his life, Hudner claimed that the reason he landed to save Brown was because Brown, like all service members, would have done the same for him.

On April 13, 1951, Thomas J. Hudner, Jr., received the Medal of Honor for his actions at the Chosin Reservoir. He served 27 years in the Navy.

“He was the most self-effacing modest guy you’d ever meet,” said Hennessey. “Everyone knew him, he was such a warm and friendly guy. Everyone loved him”

Hudner was extremely active in the veteran’s community of Massachusetts, even going so far as to serve as the Commissioner of the Commonwealth of Massachusetts Department of Veterans’ Services from 1991 to 1999. 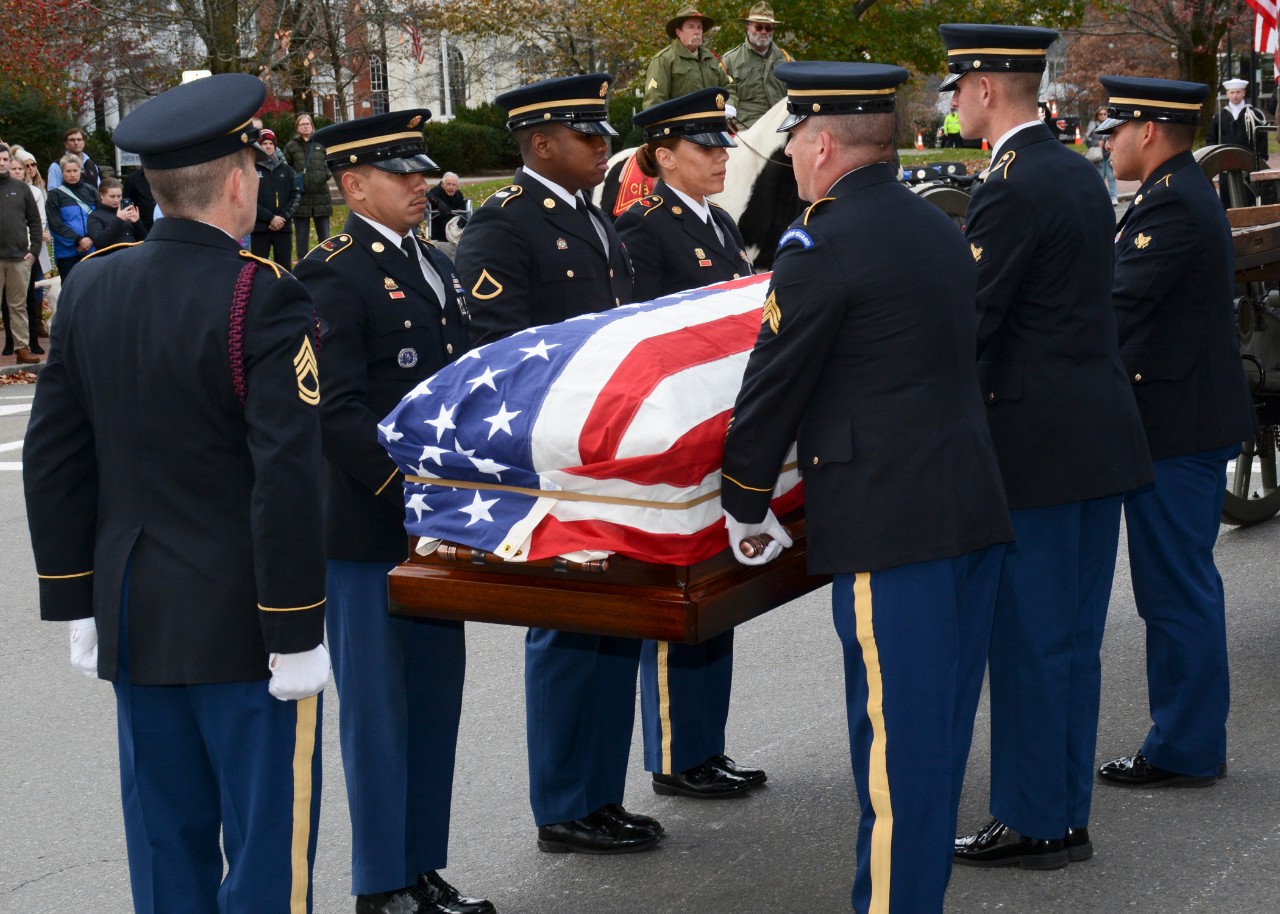 Francisco A. Ureña, the current Secretary of the Commonwealth of Massachusetts Department of Veterans’ Services, was one of Hudner’s successors and mentees.

“After retiring (from the Navy), he could have gone into business but continued with government service by becoming the commissioner of the Commonwealth of Massachusetts Department of Veterans’ Services,” said Ureña. “He was someone who was extremely caring and passionate, not only about veterans, but specifically about their social needs. He was someone that made us all proud to be civil servants.”

Despite all of his personal and professional titles, to some, the one he’ll be remembered most as is: dad.

“My dad was always there for me,” said Thomas J. Hudner III. “I knew he was busy, but he would always attend my sports games. It didn’t matter whether my team won or lost, he was always supportive.”