WASHINGTON (NNS) -- A naval aviator who earned the Medal of Honor during the Korean War was laid to rest with full military honors at Arlington National Cemetery (ANC), April 4. 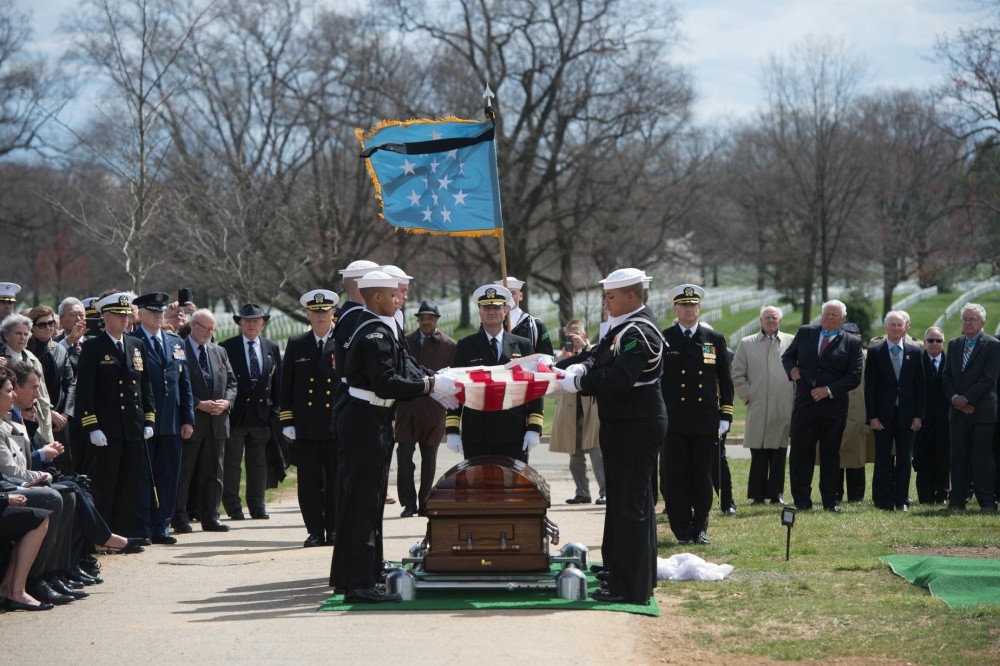 Caption: 0404-N-UM082-0031 ARLINGTON NATIONAL CEMETARY (April 04, 2017) Sailors attached to the U.S. Navy Ceremonial Guard fold the national ensign at the funeral for Capt. Thomas J. Hudner Jr. at Arlington National Cemetery, April 4. Hudner was awarded the Medal of Honor for his actions in trying to save the life of his wingman during the Battle of Chosin Reservoir during the Korean War. (U.S. Navy photo by Mass Communication Specialist 3rd Class Raymond Minami)

Family and friends of Capt. Thomas J. Hudner, Jr., as well as a number of service members attended the ceremony which began at the Old Post Chapel on Joint Base Myer-Henderson Hall, in Arlington, Va.

Full military honors were rendered by the U.S. Navy Ceremonial Guard at the Old Post Chapel and at the final interment site at ANC. In addition, the ceremony also included a missing man formation flyover by Strike Fighter Squadron 32 (VFA-32), the same squadron Hudner was assigned to when he earned the Medal of Honor. VFA-32 flew out of Naval Air Station Oceana in Virginia Beach, Va. 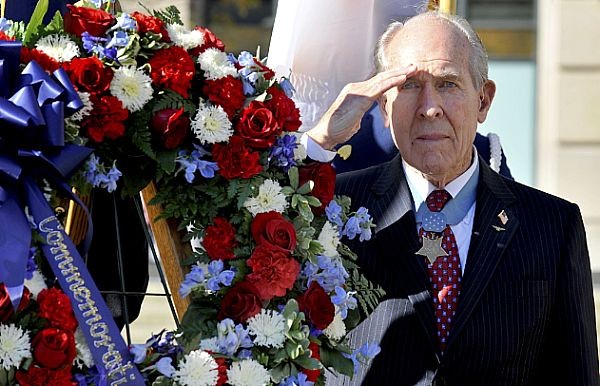 Hudner received the Medal of Honor from President Harry S. Truman for "conspicuous gallantry and intrepidity at the risk of his life above and beyond the call of duty" during the Battle of Chosin Reservoir in the Korean War. During a mission, one of his fellow pilots, the Navy's first African American naval aviator to fly in combat, Ensign Jesse L. Brown, was hit by anti-aircraft fire damaging a fuel line and causing him to crash. After it became clear Brown was seriously injured and unable to free himself, Hudner proceeded to purposefully crash his own aircraft to join Brown and provide aid. Hudner injured his own back during his crash landing, but stayed with Brown until a rescue helicopter arrived. Hudner and the rescue pilot worked in the sub-zero, snow-laden area in an unsuccessful attempt to free Brown from the smoking wreckage. Although the effort to save Brown was not successful, Hudner was recognized for the heroic attempt.

"A hero the day he tried to rescue Jesse, a hero when he served our community, and a hero when he passed," said Scherry. "Whenever I spoke to him, he always talked of Jesse and Jesse's family. He never spoke of himself, or anything he did. It was never about Tom... We will, as the first crew of his ship, carry forward his legacy and his values of family, life, equality, and service every day of our lives."

Hudner was the last living Navy recipient of the Medal of Honor from the Korean War.

After receiving recognition for his heroism, Hudner remained on active duty, completing an additional 22 years of naval service during which his accomplishments include flying 27 combat missions in the Korean War and serving as the executive officer aboard USS Kitty Hawk (CV 63) during the Vietnam War.

PCU Hudner is expected to be commissioned in Boston later this year and will be the 66th Arleigh Burke-class destroyer to join the fleet. 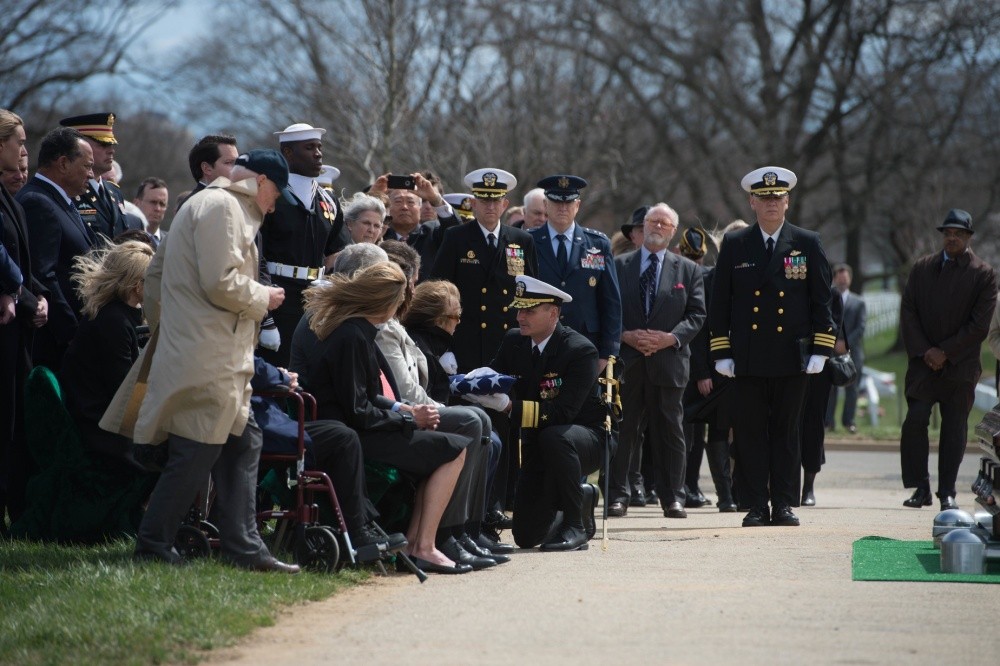 Caption: 180404-N-UM082-0051 ARLINGTON NATIONAL CEMETARY (April 04, 2017) Rear Adm. William J. Galinis, program executive officer, ships, presents the national ensign to the family of Capt. Thomas J. Hudner Jr. at Arlington National Cemetery, April 4. Hudner was awarded the Medal of Honor for his actions in trying to save the life of his wingman during the Battle of Chosin Reservoir during the Korean War. (U.S. Navy photo by Mass Communication Specialist 3rd Class Raymond Minami)