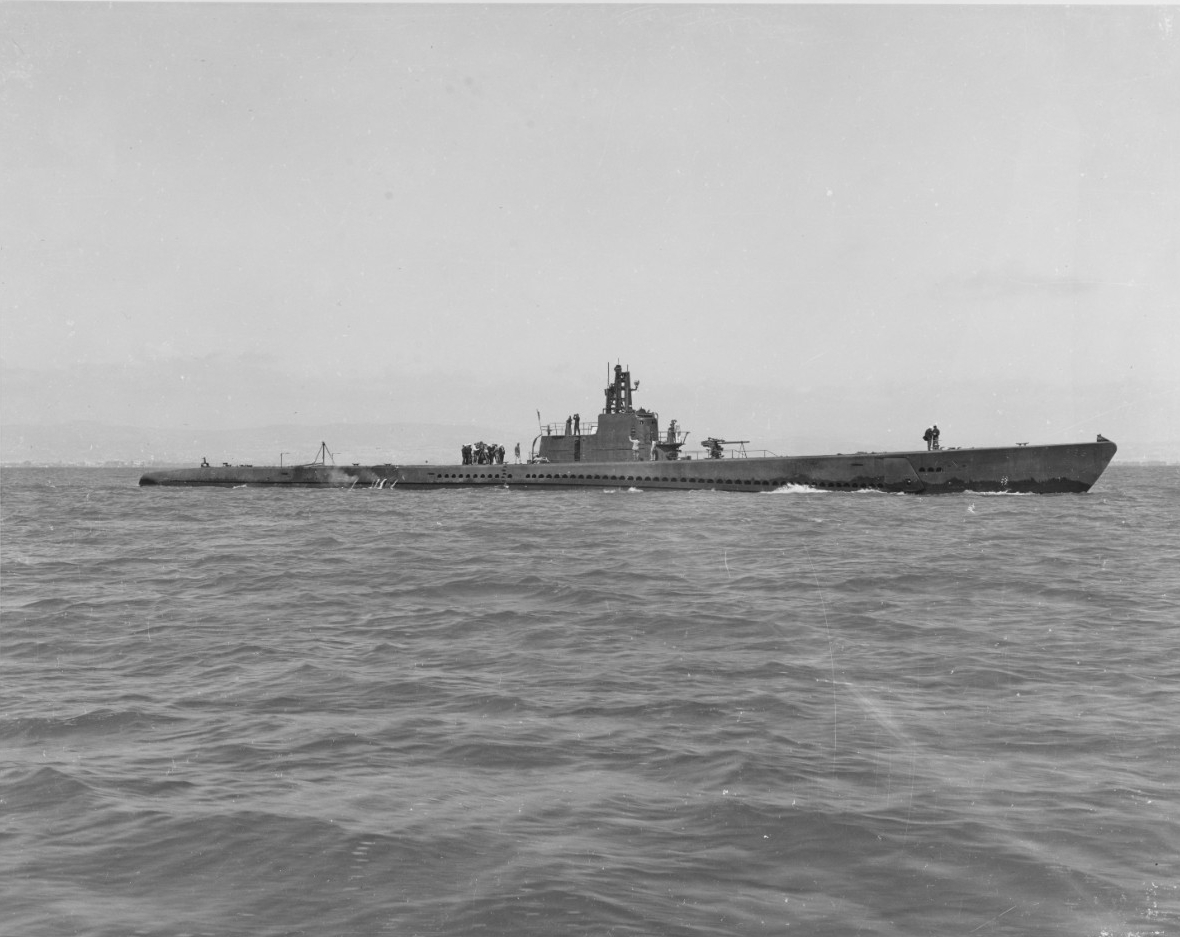 USS Swordfish (SS-193) was commissioned on 22 July 1939, and after shakedown and subsequent repairs, was underway to Pearl Harbor, Hawaii, in early 1941. On 3 November, Swordfish departed Pearl Harbor with three other submarines and arrived at Manila, Philippine Islands, on 22 November. The submarine remained at that location until after the Japanese attacked Pearl Harbor on 7 December 1941. The following day, Swordfish set sail on her first war patrol conducted off the coast of Hainan, China. After damaging several enemy vessels, the boat sank Japanese cargo ship Atsutasan Maru on 16 December with a spread of torpedoes—the first American submarine to sink a Japanese ship during World War II.

On 16 January 1942, Swordfish departed on her second war patrol conducted in the Celebes Sea and in the Philippines. After sinking cargo ship Myoken Maru on 24 January, Swordfish spent the remainder of the war patrol evacuating high-level Philippine officials to include the president of the Philippines and his family. On 1 April, Swordfish was underway on her third war patrol with her primary mission to deliver 40 tons of provisions to the besieged island of Corregidor. However, Corregidor fell into enemy hands before the mission could be carried out. The boat spent the rest of the patrol near Ambon Island before returning to Fremantle. Her fifth and sixth war patrols in the Solomon Islands were also unproductive. On the submarine's seventh war patrol, she sank the 4,122-ton cargo ship Myoho Maru on 19 January 1943, before returning to Pearl Harbor a few days later for overhaul.

At the end of July, Swordfish set sail for her eighth war patrol. On 22 August, she spotted cargo ship Nishiyama Maru and fired two torpedoes sending the enemy vessel below the waves. About two weeks later, Swordfish intercepted an enemy convoy, and after damaging a large tanker, sent cargo ship Tenkai Maru to its watery grave. The war patrol concluded at Brisbane, Australia, on 20 September. The submarines ninth patrol lasted only three weeks due to mechanical difficulties.

On the day after Christmas 1943, Swordfish set sail for her tenth war patrol in the waters of Tokyo Bay. On 14 January 1944, Swordfish sank passenger-cargo ship Yamakuni Maru and two days after that sank converted gunboat Delhi Maru. Two weeks later, Swordfish set her sights on Kasagi Maru breaking the converted salvage vessel in half with two torpedoes. On her eleventh war patrol in the Marianas Islands, several enemy vessels were damaged, but there were no confirmed sinkings. Swordfish conducted her twelfth war patrol in waters around the Bonin Islands. On 9 June, personnel on the submarine observed Japanese destroyer Matsukaze clearly silhouetted against the horizon. Swordfish dispatched two torpedoes into the bowels of the enemy destroyer sending the warship to the depths of the ocean. On 15 June, she torpedoed and sank cargo ship Kanseishi Maru. The rest of the patrol was uneventful, and the submarine concluded her twelfth patrol by the end of June at Pearl Harbor.

Under Commander Keats E. Montross, Swordfish departed Pearl Harbor on 22 December 1944 for her thirteenth war patrol in the vicinity of Nansei Shoto. After topping off at Midway, Swordfish’s mission was to conduct photographic reconnaissance in preparation for the upcoming Battle of Okinawa. On 2 January, Swordfish was ordered to stay clear of the Nansei Shoto area until completion of scheduled air strikes. Swordfish acknowledged receipt of the orders, but that was the last time she was ever heard from again. After weeks of repeated attempts to contact the submarine, Swordfish was presumed lost.

In a subsequent report, USS Kete (SS-369) acknowledged patrolling in the vicinity of Okinawa making radar contact with a submarine on 12 January it believed was Swordfish. Later that day, Kete reported hearing a barrage of depth charges in the area where Swordfish was thought to be located, but post-war Japanese information on antisubmarine attacks reported no attacks that Swordfish was likely to be a victim. However, it is known there was a plethora of mines planted around Okinawa in anticipation of the Allied invasion of the island.

Before her final war patrol, Swordfish sank 21 enemy vessels, amounting to 113,100 tons of enemy shipping. Swordfish earned eight battle stars for her WWII service and was awarded the Navy Unit Commendation for her first, second, and fourth patrols. Almost 90 crewmembers were onboard Swordfish at the time of her loss. 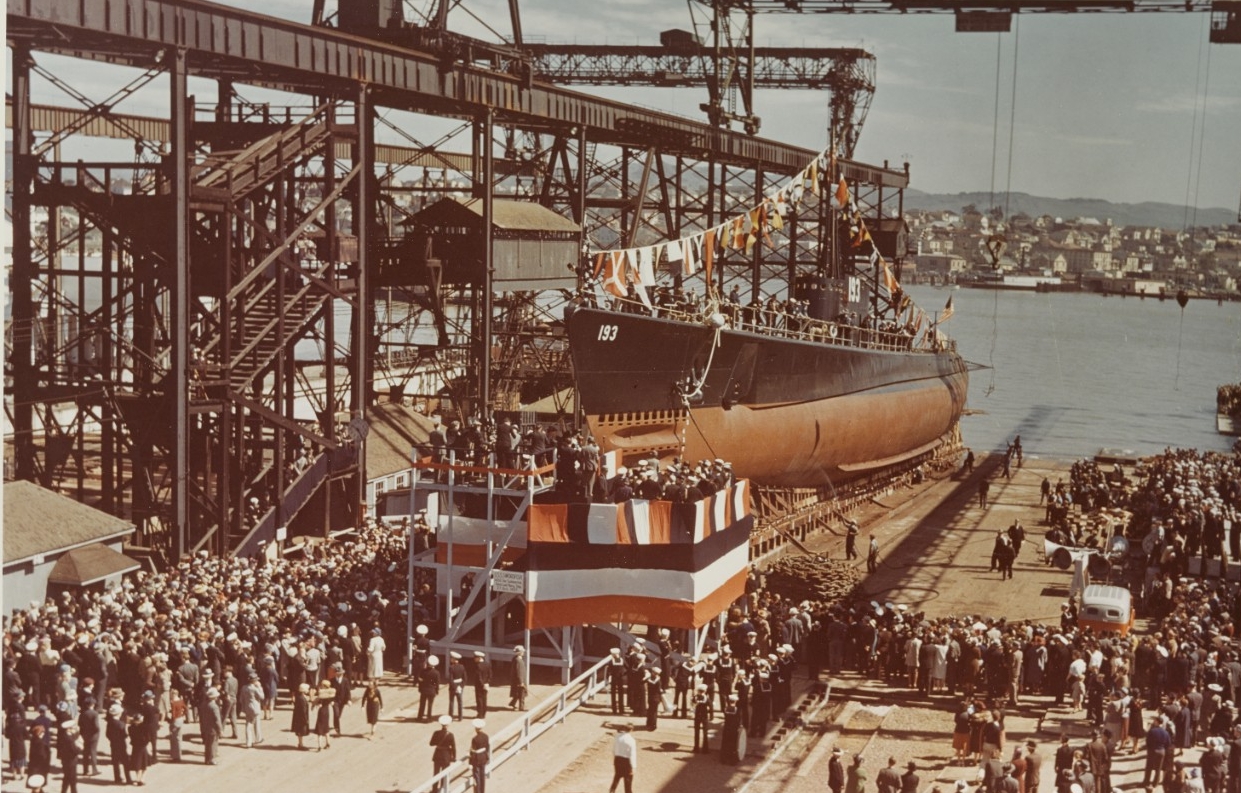 USS Swordfish (SS-193) ready for launching at the Mare Island Navy Yard, California, 1 April 1939. This is the earliest known color official Navy photograph that can be precisely dated. Now in the collections of the National Archives, 80-G-K-13791. 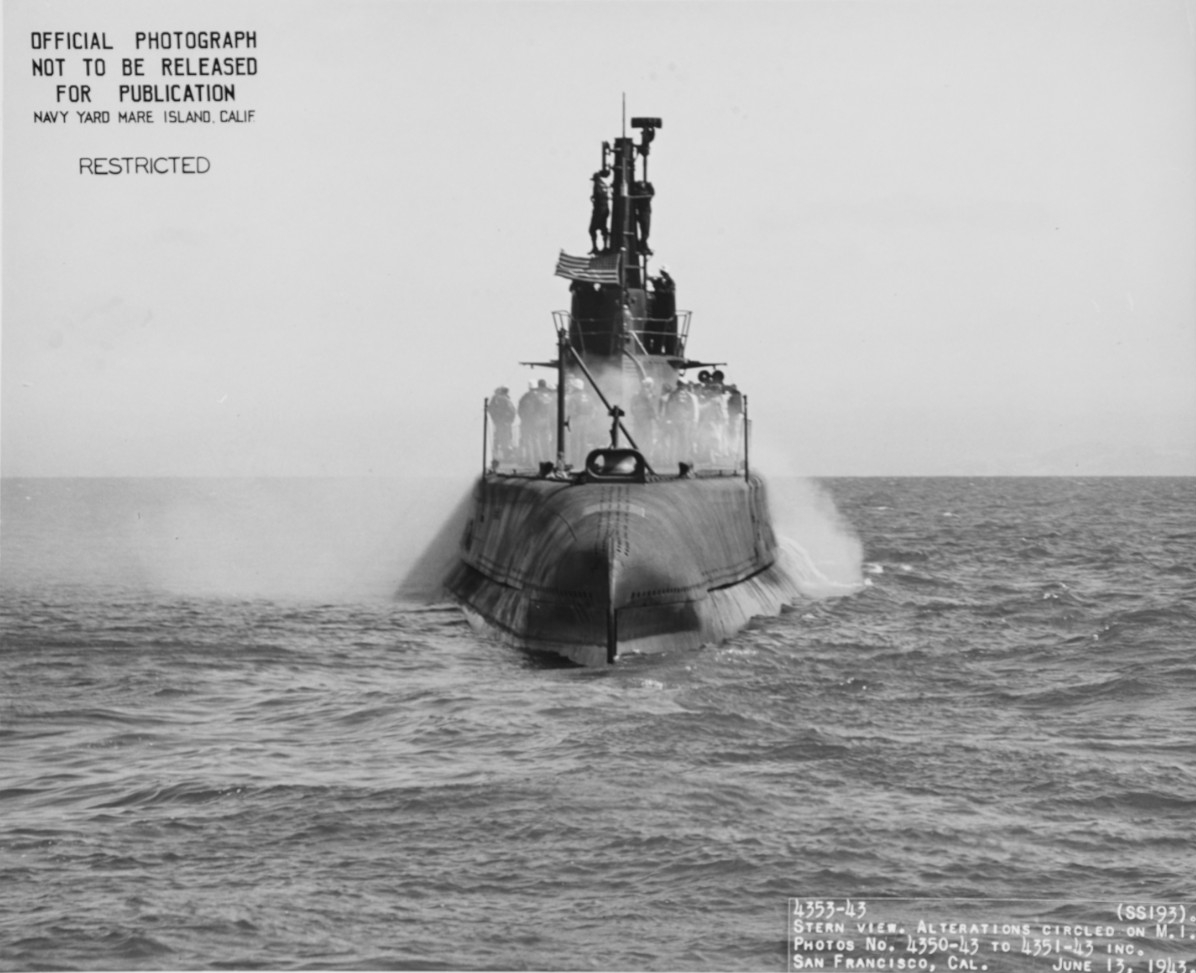 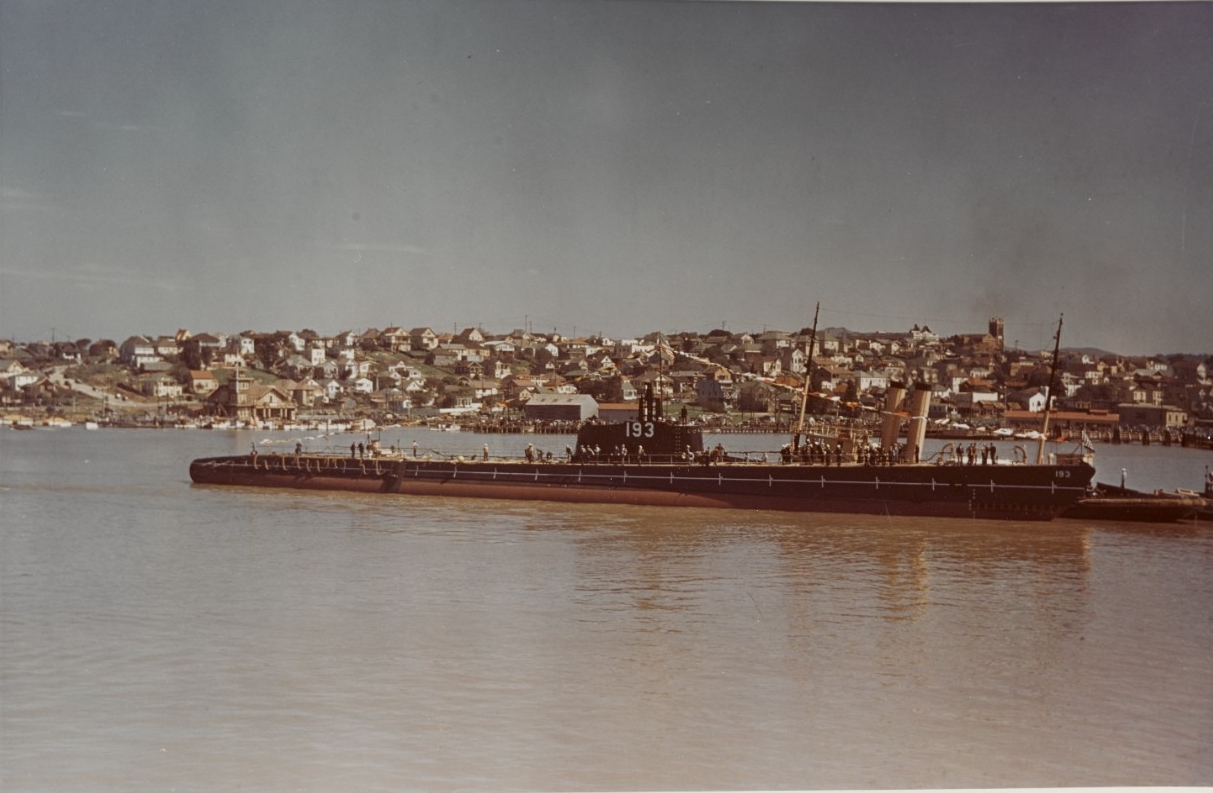 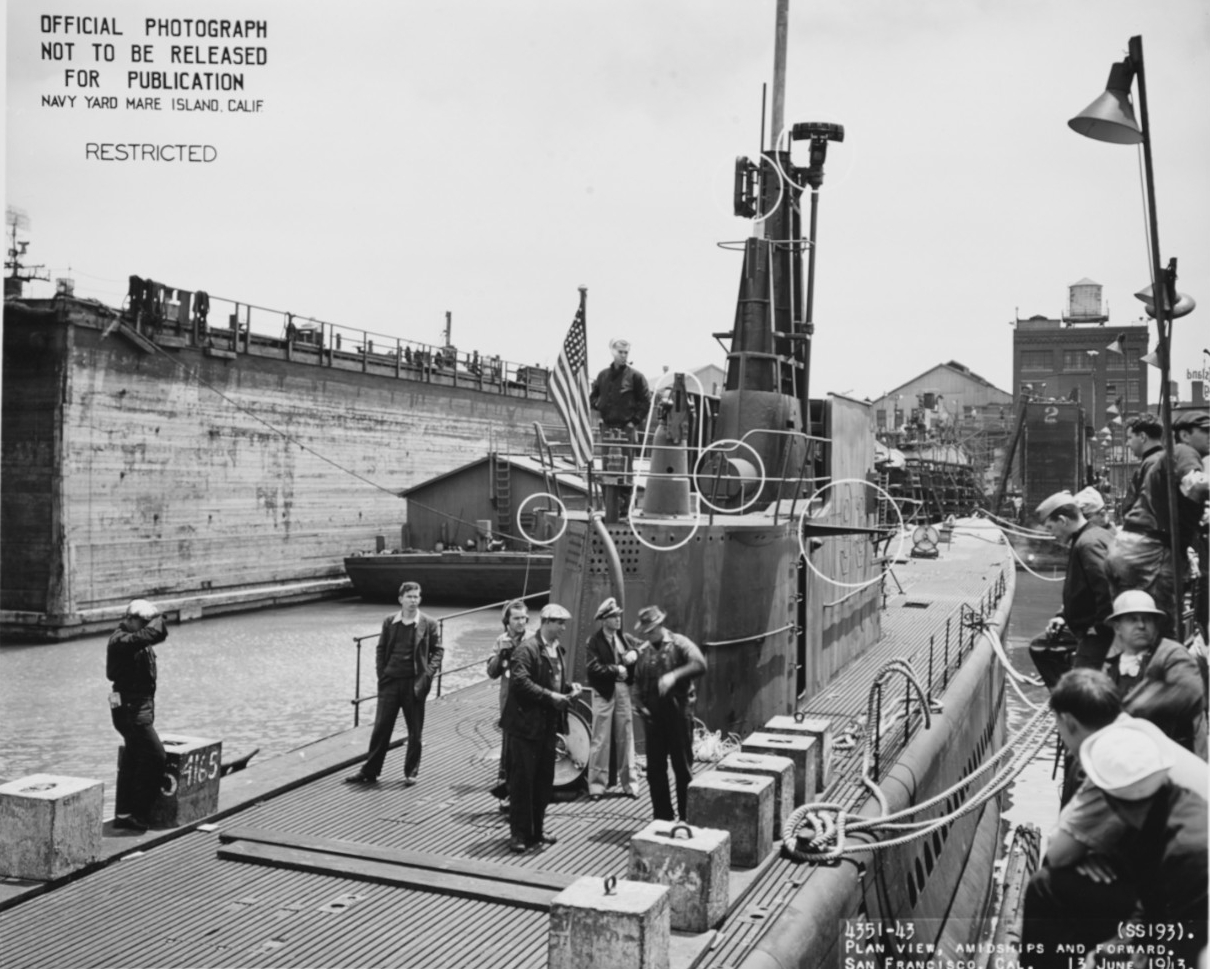 USS Swordfish (SS-193) at San Francisco, California, 13 June 1943, at the conclusion of an overhaul. Photographed by the Mare Island Navy Yard, California. Circles mark recent alterations, among them a mounting for a 20mm gun and spreaders for radio antennas. Official U.S. Navy photograph from the collections of the Naval History and Heritage Command, NH 98516. 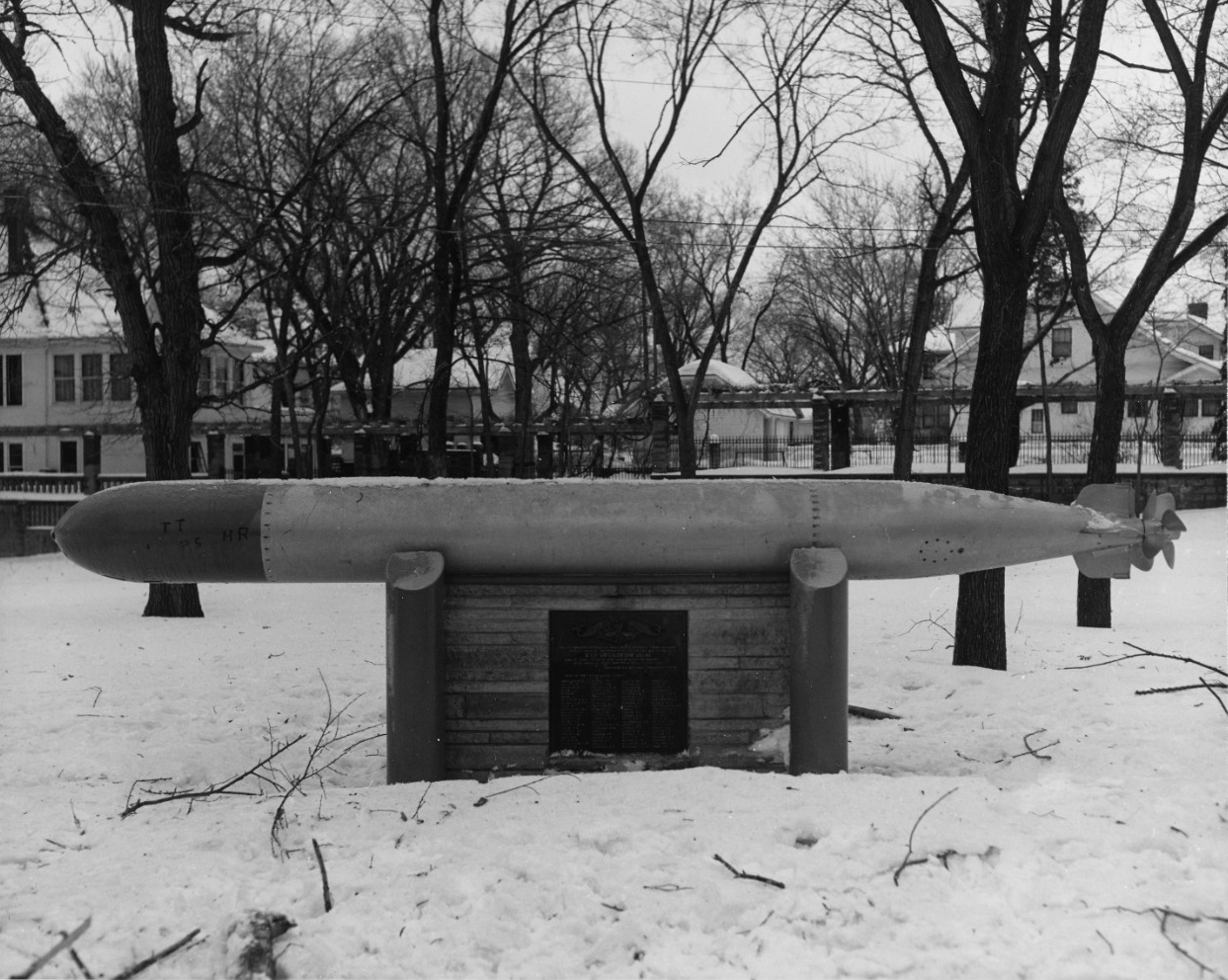 Memorial to USS Swordfish (SS-193) at St. Paul, Minnesota, January 1967. It features a torpedo and has plaques on either side, one in memory of Swordfish crewmembers, who were lost with their submarine off Okinawa, January 1945. The other plaque memorializes the 51 other U.S. Navy submarines lost during World War II. U.S. Naval History and Heritage Command photograph, NH 42077.