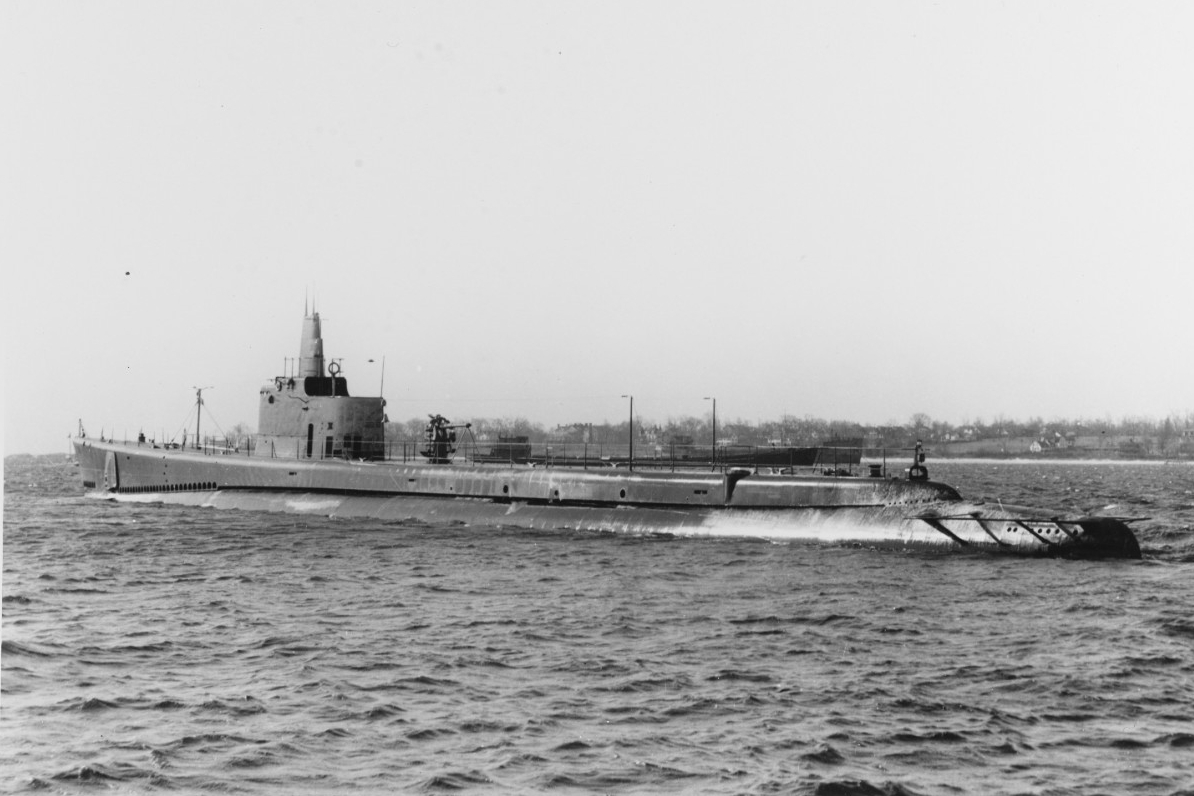 Gato-class submarine USS Growler (SS-215) was commissioned on 20 March 1942 with Lieutenant Commander Howard W. Gilmore in command. For the first couple of months, Growler conducted intensive training off the Connecticut coast that was hampered by continuous mechanical problems and subsequent repairs. On 1 May 1942, Growler was underway for Pacific waters, arriving at Pearl Harbor on 31 May. After almost three weeks of training and special availability, Growler steamed for Midway, conducting daily training dives and drills while en route to her assigned area of operations.

Growler’s first war patrol began on 29 June after Task Force 8 ordered her to patrol in the area of the Aleutians. The boat arrived off the waters of Kiska Harbor the next day. On 5 July, Gilmore spotted what he thought were three Japanese escorts departing Kiska. As Growler approached the convoy to attack, she surfaced to discover the enemy ships were actually destroyers. Growler fired a spread of torpedoes, scoring hits on Asashio-class Kasumi and Kagero-class Shiranui. Both destroyers suffered heavy damage that left them unable to fight. Then, Growler fired two more torpedoes on the third destroyer, Arare. The first torpedo missed, but the second sent the enemy ship to the ocean’s floor. The badly damaged Shiranui managed to rescue Arare’s commanding officer and 42 survivors as the ship went down. Growler departed the area unscathed.

In August 1942, Growler was underway for her second war patrol in waters off Taiwan. After having endured an intense depth-charge attack while hunting a 10,000-ton passenger freighter a few days earlier, Gilmore ordered four torpedoes deployed on 2,904-ton ex-gunboat Senyo Maru and scored two hits, sinking the ship by the bow. A few days later, Growler sent Eifuku Maru, a 5,866-ton cargo ship, below the waves. In the early morning of 4 September, Growler put a sampan out of action with her machine guns, and then just four hours later, broke 2,204-ton cargo shipTaika Maru in half with her torpedoes. Over the next few days, in an effort to stop Growler’s continued assault on Japanese shipping, the enemy dispatched multiple patrols to locate Growler, but their efforts were fruitless. Gilmore had already ordered the submarine underway to patrol the Pescadores Channel off Taiwan. On 13 September, Growler spotted a scattered convoy consisting of seven freighters and one destroyer. The boat fired four torpedoes at the convoy, and although the crew heard explosions, could not verify damage to the ships due to enemy patrol boats in the area. Choosing not to engage in a deadly surface fight, Growler dove to periscope depth to avoid her foes. The submarine left the patrol area a few days later and arrived at Midway on 23 September. Upon arrival, Gilmore was commended in a letter from Commander, Submarine Squadron, on “a very aggressive second war patrol.”

After refit at Pearl Harbor, Growler was underway on her third war patrol in late November. Despite coming into close proximity with multiple enemy ships, Growler came up empty-handed. The boat ended the patrol due to a broken crankshaft that was subsequently replaced in Brisbane, Australia. On New Year’s Day 1943, Growler was on the move again for her fourth war patrol, this time off Rabaul. On 16 January, Growler scored two hits on the lead ship of an enemy convoy—the 5,857-ton cargo ship Chifuki Maru. After torpedoes ripped into the cargo ship, it listed heavily to port before going down by her stern. Growler escaped the area after surviving a gauntlet of depth charges and bombs from the convoy’s destroyers and aircraft patrolling the area.

After several near misses and subsequent enemy attacks, Growler sighted a small enemy ship on 7 February near the Bismarck Islands. Whipping around, Growler made her torpedo tubes ready for a surface attack. The 900-ton stores ship Hayasaki spotted Growler and reversed course to attack, making ready to ram. Gilmore ordered left full rudder, sounded the collision alarm, and rammed the enemy vessel at a speed of 17 knots. As Growler plowed into the enemy vessel between the bow and bridge, the American crew was violently tossed around the interior of the submarine. After impact, Hayasaki opened fire with her machine guns. Gilmore was mortally wounded and two others were killed on the bridge during the brazen attack. An immediate order to clear the bridge sent the boat’s executive officer, Lieutenant Commander Arnold F. Schade, and the quartermaster below. Gilmore, realizing he would endanger the submarine and crew due to his inability to get below deck, uttered the legendary words, “Take her down.” After a brief hesitation, Schade, with a heavy heart, followed his commander’s final order and closed the hatch. The Japanese continued to riddle the bridge with gunfire until Growler was safely underwater. For his heroic sacrifice, Gilmore received the Medal of Honor posthumously. He was the first of seven U.S. submarine commanders who received the nation’s highest honor during the war. After the loss of Growler’s beloved commander, the boat was ordered to end the patrol and return to Australia for repairs.

After extensive repairs that included replacing the submarine’s bow, Growler was underway for her fifth war patrol. Around the middle of June, Schade, now the commanding officer of the boat, spotted a convoy of eight ships and three escorts. Chasing the convoy on the surface, Shade ordered the deployment of four torpedoes on the lead ship and an accompanying passenger-cargo ship, scoring two hits on each. Although the larger ship was dead in the water, Growler was only given credit for sinking Miyadono Maru, the smaller of the two vessels. It was Shade’s first kill as commander, and for him, it was sweet revenge for the loss of his former commanding officer. After 49 days on patrol, Growler returned to Brisbane on 30 June.

Growler’s sixth and seventh war patrols were largely uneventful except for a couple of encounters with sea life. On 6 September, during her sixth patrol, Growler surfaced and the crew noticed the deck was covered with Bonita fish. Members of the crew collected a large sack full and then served fish fillets for all hands. Earlier in the patrol, the submarine ran into a school of blackfish. The seventh patrol was troubled with storage battery problems and faulty generators. After arriving at Pearl Harbor on 7 November, the submarine was ordered to California for extensive overhaul and refitting. While on leave, tragedy struck the boat again when a member of the crew, EMCM Euen M. Jenes, was killed in a car accident just five days before Christmas. After repairs were complete, Growler was underway for her eighth war patrol, but it was hampered by high seas and violent weather. However, she did manage to sink a 250-ton Japanese gunboat patrolling off Io Kita Jima on 10 April 1944.

Growler’s ninth patrol began on 14 May in the Marianas–Eastern Philippines–Luzon area with a new skipper, Lieutenant Commander Thomas B. Oakley, Jr. The submarine patrolled just off the Marianas, conducting sweeps of the Saipan–Tinian Island channels in anticipation of the upcoming Battle of Saipan. Growler later received orders to perform lifeguard duties and rescue any downed airmen in their area of operations during the invasion. Also during the patrol, Growler rendezvoused with USS Bang (SS-385) and USS Seahorse (SS-304) to form a wolf pack. On 28 June, while the wolf pack steamed through the Balintang Channel, Growler picked up a contact on her radar. After visual confirmation was obtained, Oakley decided to “attack after moonset.” As she continued to stalk the convoy, Growler sent a spread of six torpedoes into the bowels of 1,920-ton Japanese tanker Katori Maru, causing a “column of black smoke and flame” that reached a height of 700 feet. Another 600-ton escort ship in the convoy was sunk as well from the spread of torpedoes fired at Katori Maru.

Riding on the success of the previous patrol, Growler would go on to conduct two more wolf pack war patrols, attacking multiple Japanese convoys. On her eleventh and final war patrol, the group detected an enemy convoy in the South China Sea. Growler closed in for the kill while USS Hake (SS-256) and USS Hardhead (SS-365) flanked the convoy. Oakley commanded the wolf pack to attack, but that was the last communication ever heard from Growler. A short time later, Hake noted in her war diary that she heard two explosions of “undetermined character,” and almost simultaneously, the convoy zig-zagged away from Growler’s position. Hardhead heard what sounded like a torpedo explosion followed by three depth charges on the opposite side of the convoy. Hake and Hardhead continued to attack the convoy, sinking the 5,300-ton tanker Manei Maru. Hake endured 16 hours of enemy attacks with some 150 depth charges exploding around her during the battle. After the engagement was complete, Hake and Hardhead attempted to contact Growler continuously for three days, but to no avail. The likely culprits of Growler’s demise were later identified as Japanese destroyer Shigure andescort vessel Chiburi, or another Japanese vessel in the convoy. The possibility also exists, however unlikely, that one of Growler’s own torpedoes made a premature or circular run, such as what occurred in the cases of USS Tullibee (SS-284) and USS Tang (SS-306).

On 1 February 1945, Navy Department Communique No. 572 stated, “Growler is overdue from patrol and presumed lost, cause unknown” and the next-of-kin of her officers and crew were notified. All hands, 86 crewmembers including Oakley, were lost. Over the course of World War II, Growler sank 15 enemy vessels for a total of 74,900 tons and damaged seven other vessels for 34,100 tons on her 11 war patrols. Growler was stricken from the Navy Register a week after she was officially presumed lost. 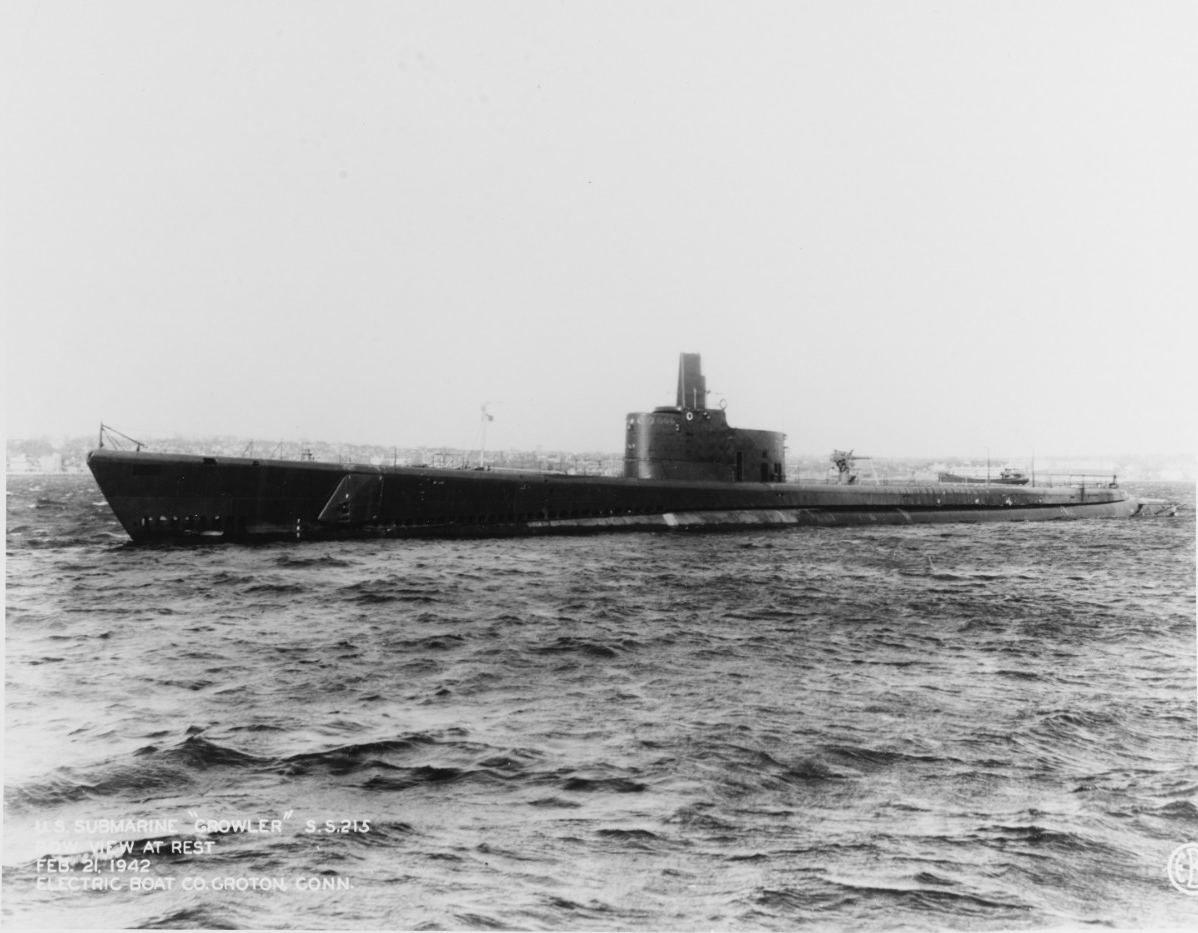 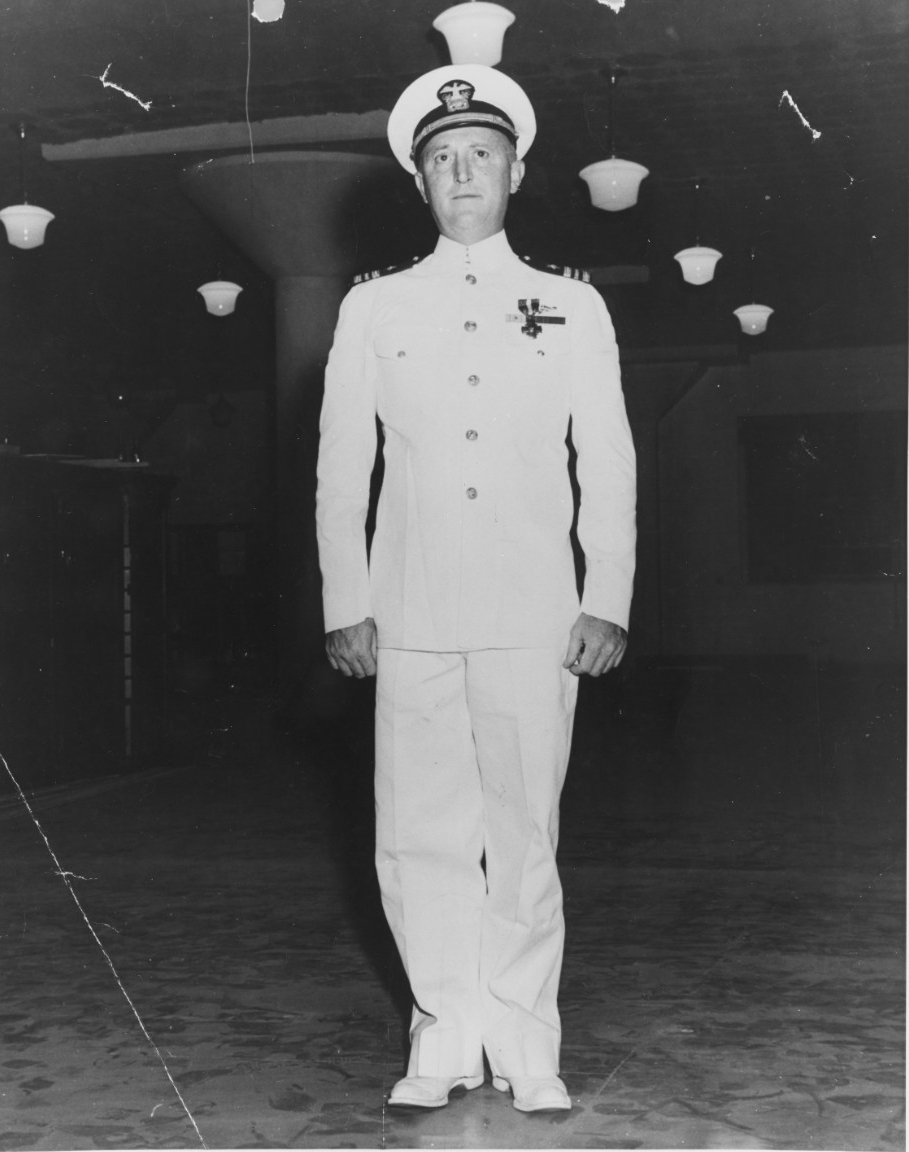 Lieutenant Commander Howard W. Gilmore photographed circa mid-1942, just after receiving the Navy Cross for extraordinary heroism while serving as commanding officer of USS Growler (SS-215) from 20 June to 17 July 1942. Official U.S. Navy photograph now in the collections of the Naval History and Heritage Command, NH 106205-A. 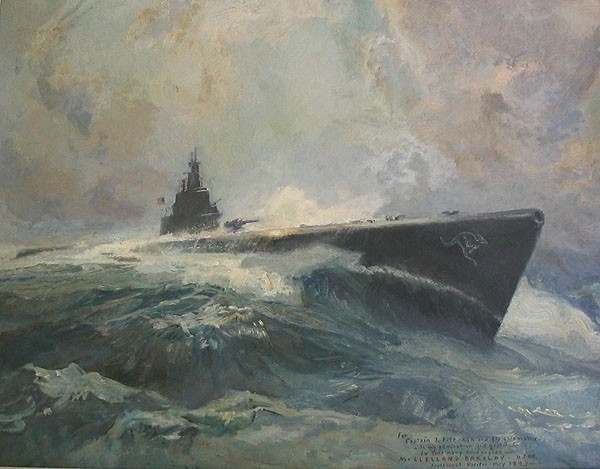 USS Growler (SS-215) painting, oil on canvas, by McClelland Barclay, 1943. Commodore James Fife presented this painting to the U.S. Navy Submarine Force Museum in Groton, Connecticut, after the war. It remains on display there today. Barclay knew and sketched Fife when he was still a captain. The inscription in the lower right reads, “For Captain J. Fife, USN and his shipmates with my admiration and gratitude for their many kindnesses. - McClelland Barclay, USNR, Southwest Pacific 1943.” 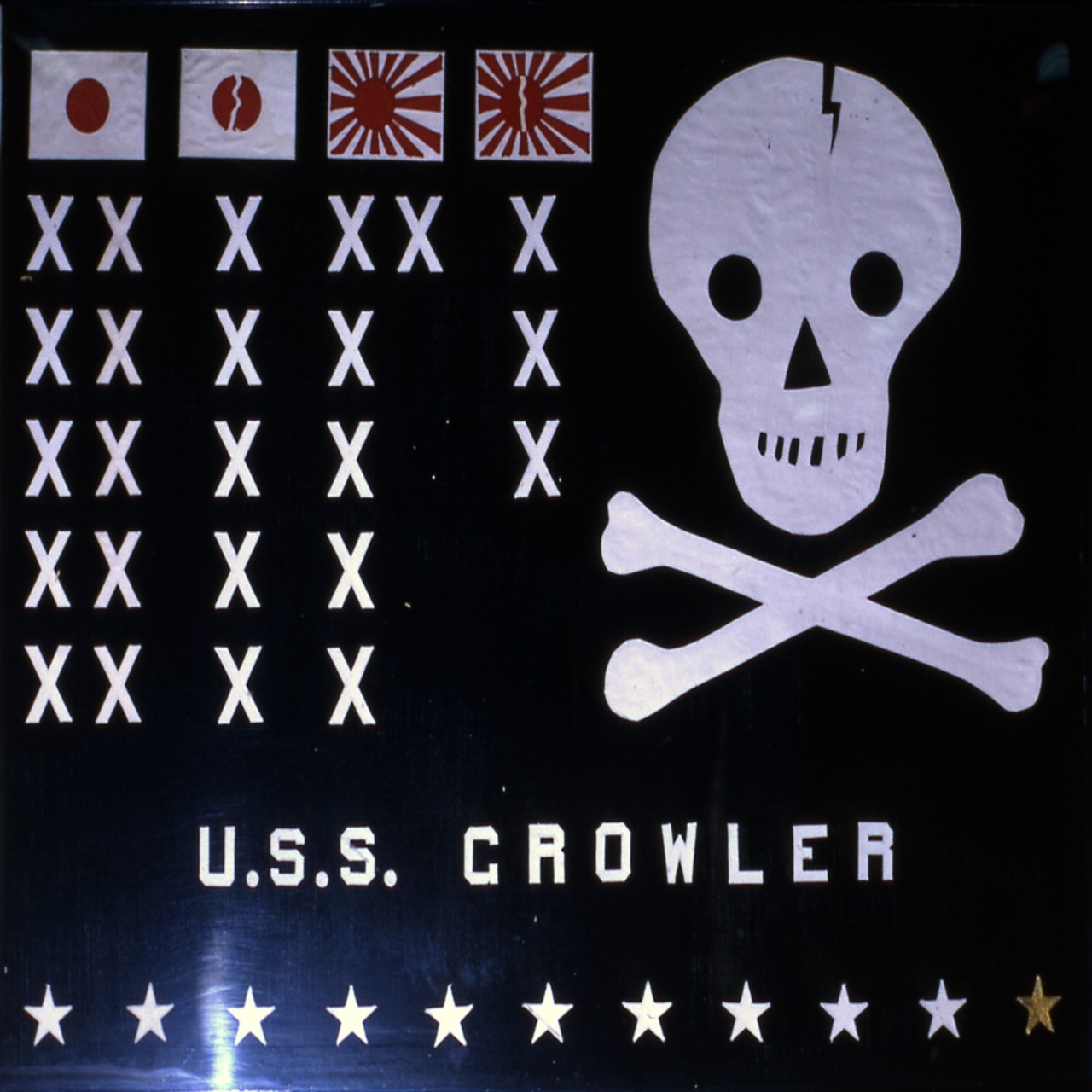 Battle flag of USS Growler (SS-215) depicts the enemy ships she had sunk as well as her 11 war patrols, with the gold star indicating she was on eternal patrol. Naval History and Heritage Command photograph, UA 80.01. 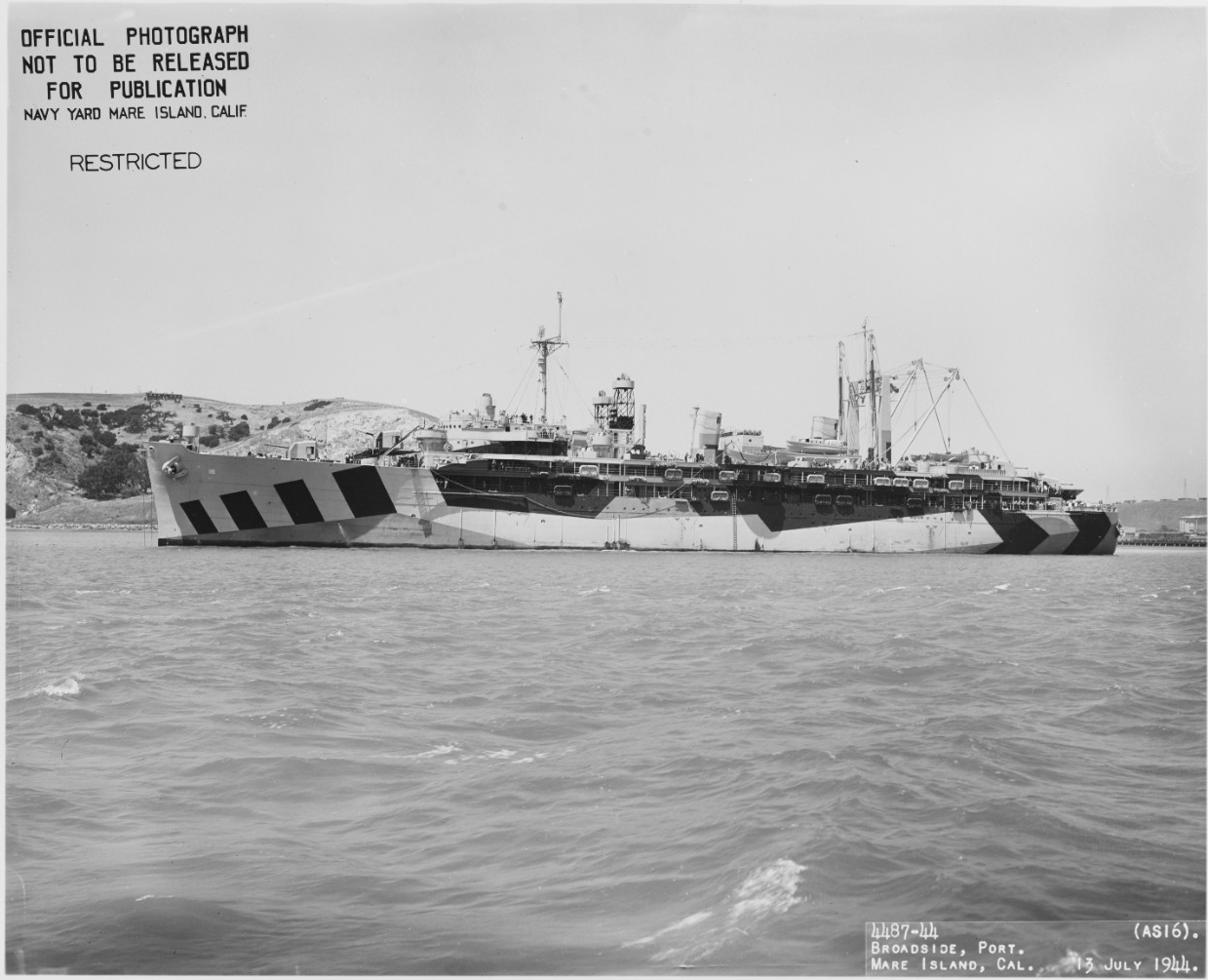 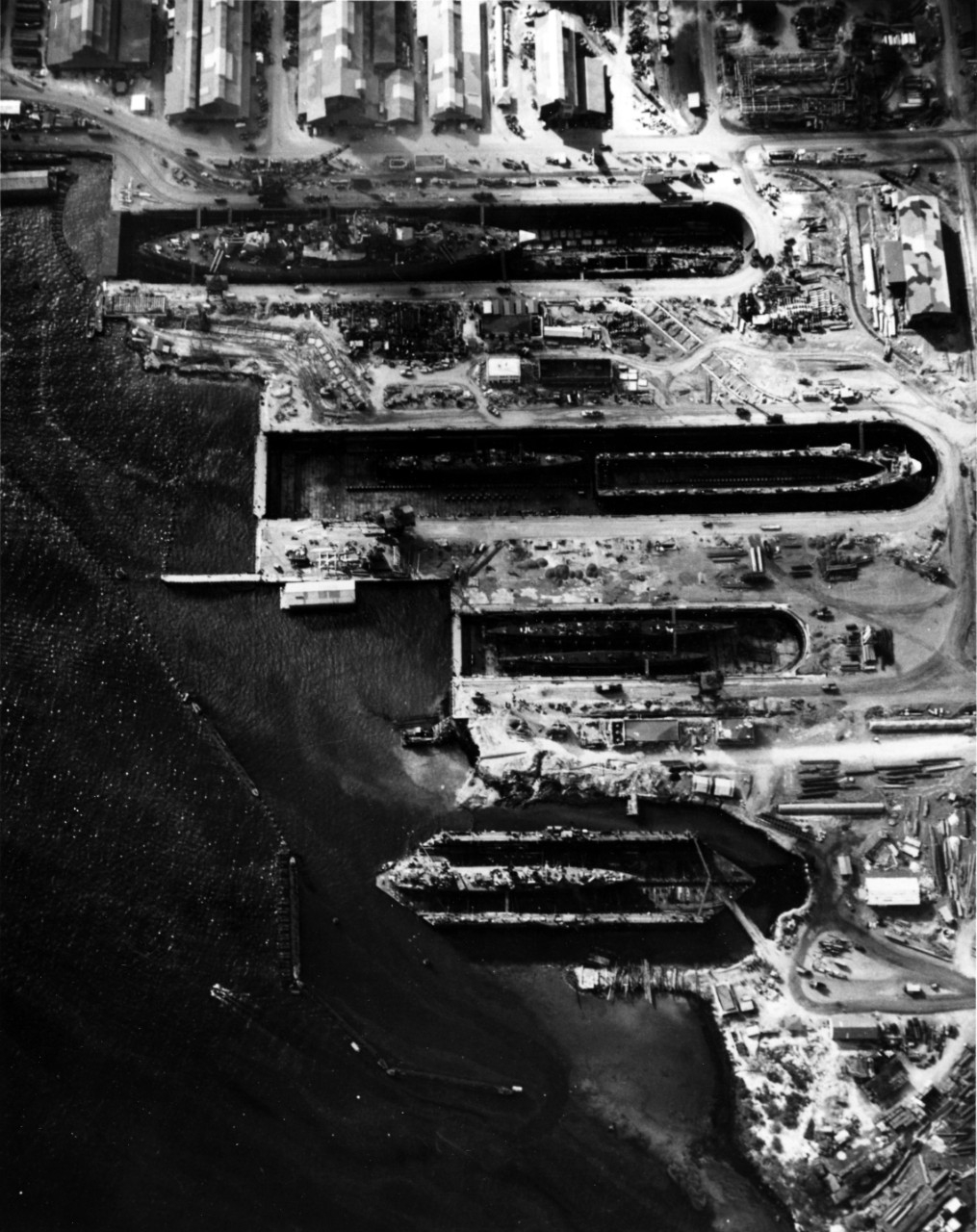 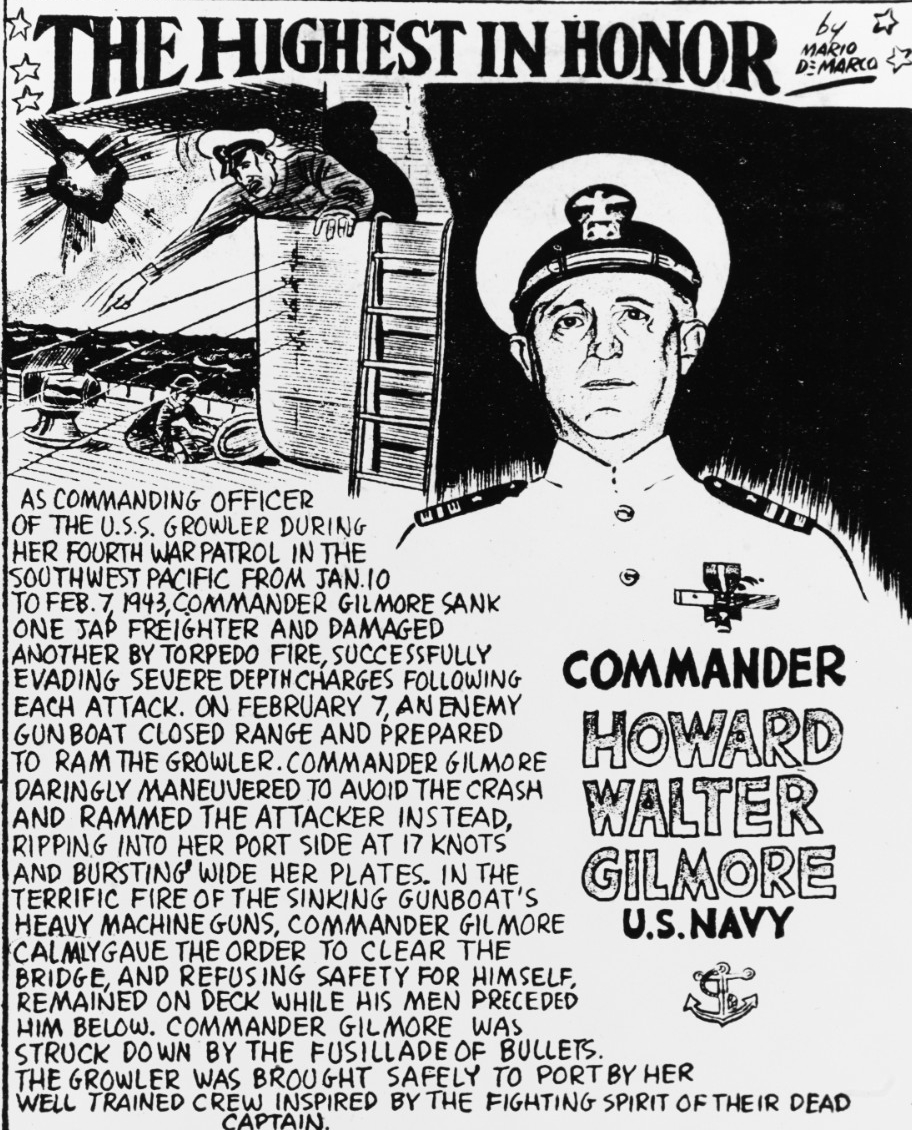 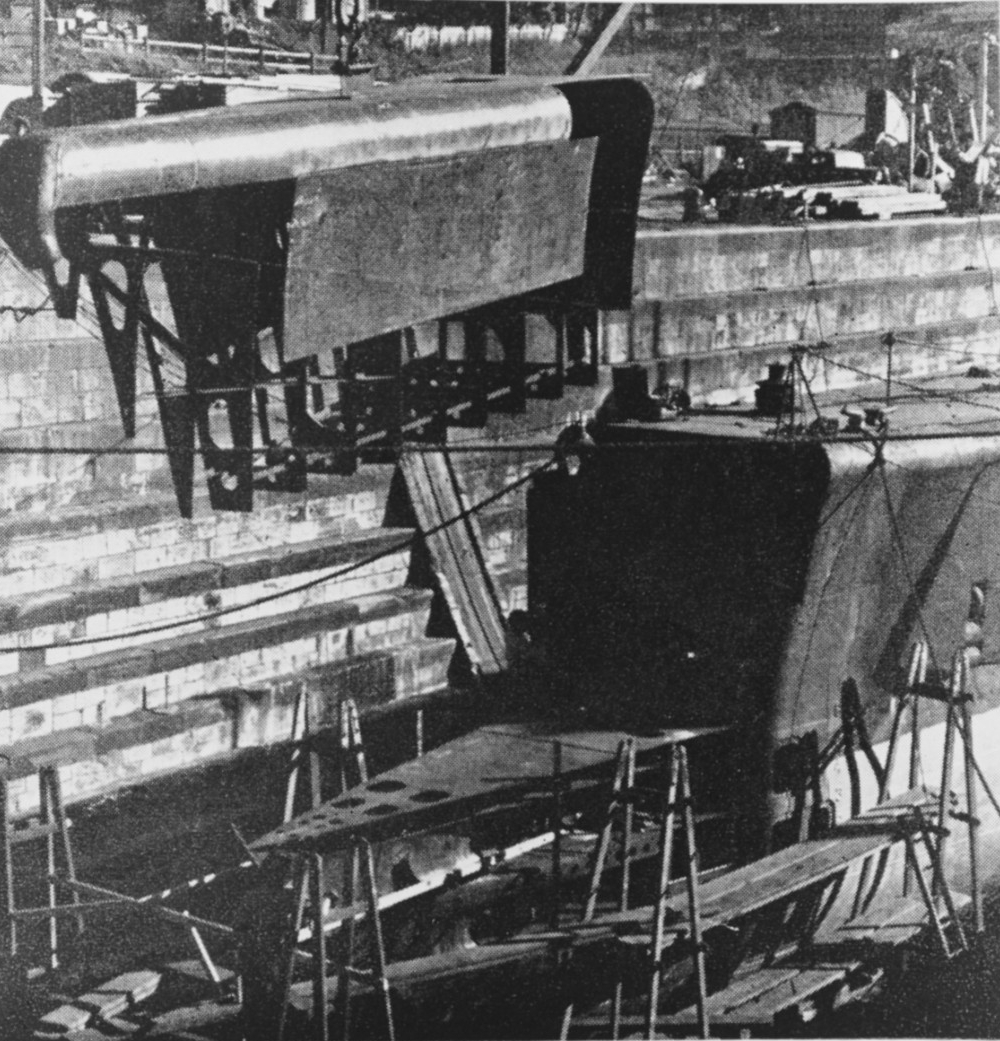 USS Growler (SS-215) received a new bow at Brisbane, Australia, circa March 1943, replacing the one damaged in a battle with an armed Japanese stores ship, 7 February 1943. 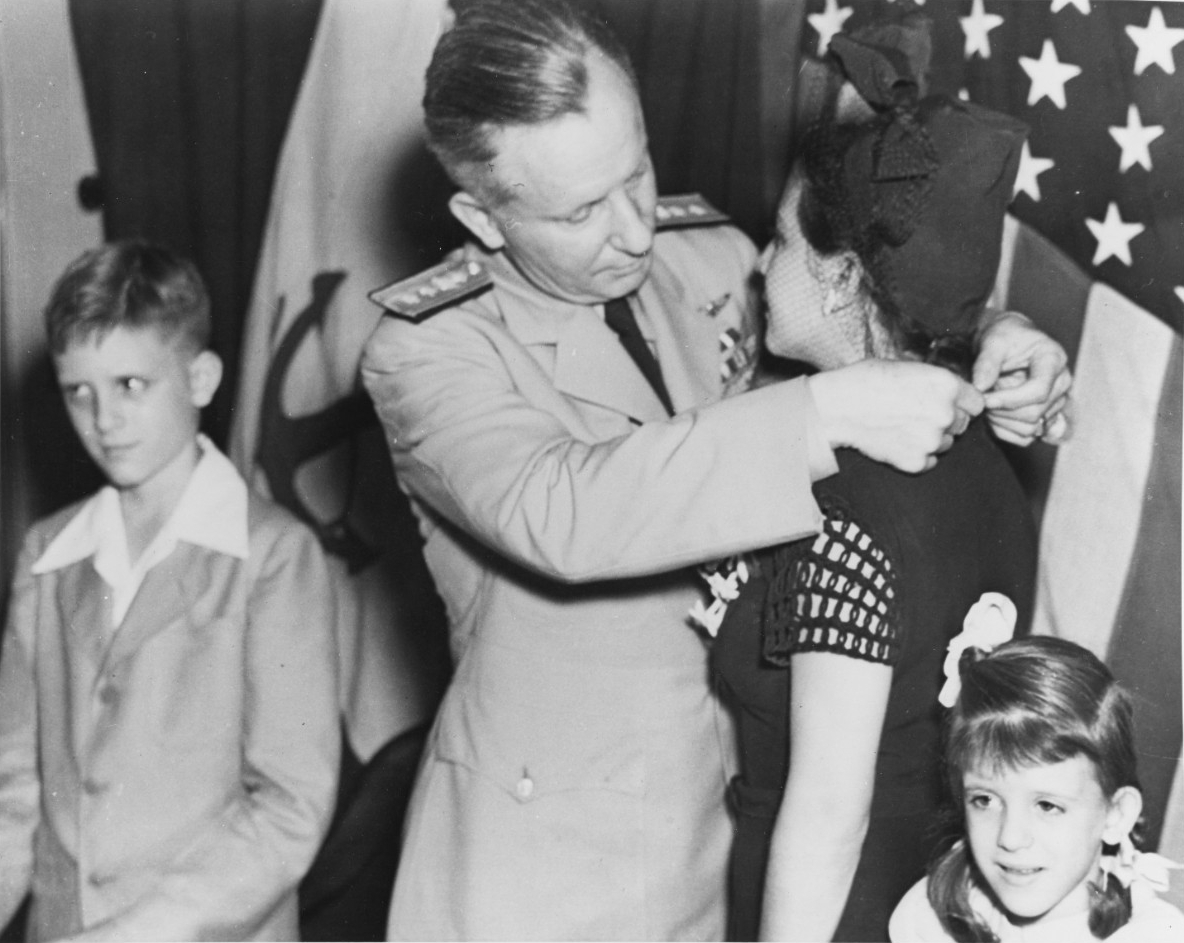