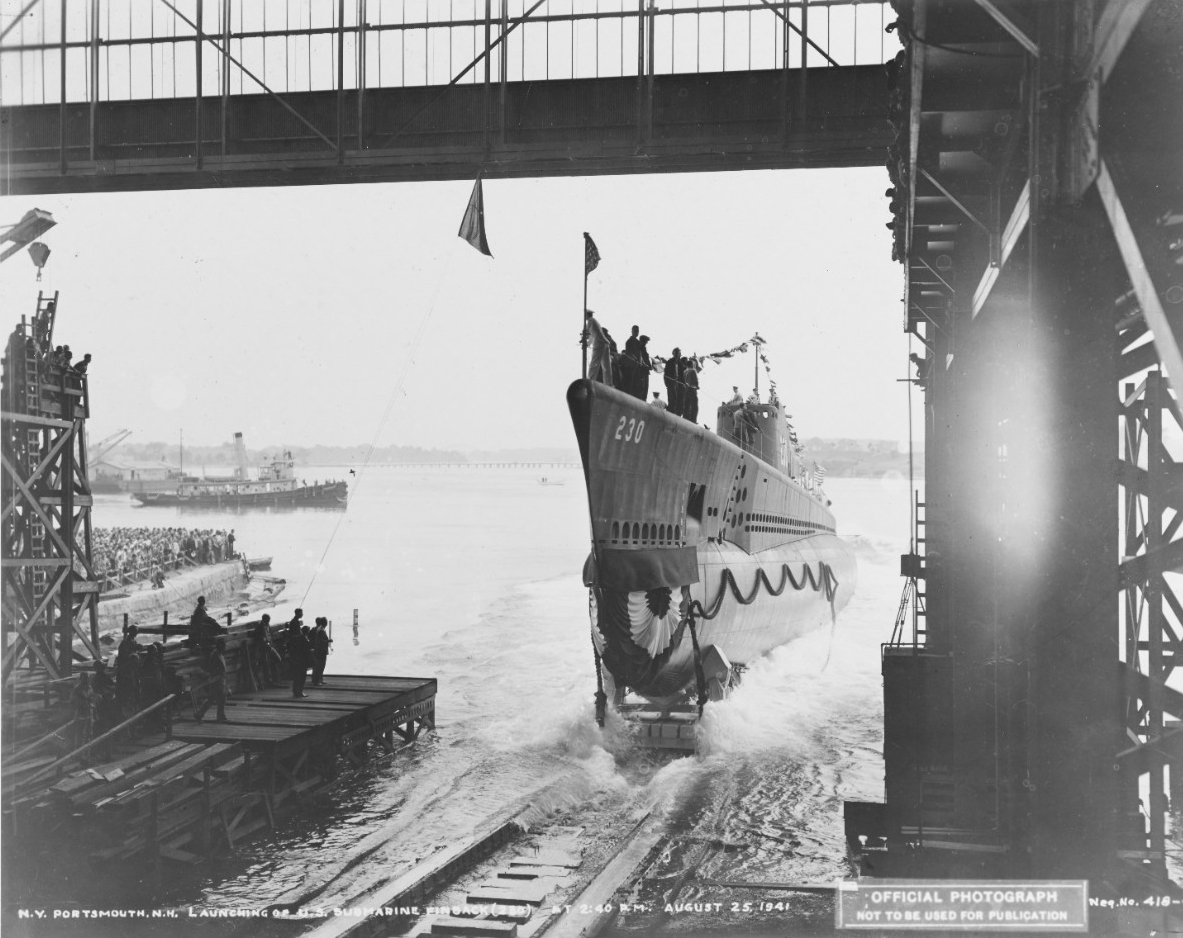 Gato-class submarine USS Finback (SS-230) was commissioned at the Portsmouth Naval Shipyard, New Hampshire, 31 January 1942, with Lieutenant Commander Jesse L. Hull as the boats first commanding officer. After shakedown training off the U.S. east coast, Finback made way for Pearl Harbor arriving on 29 May. Two days later, she was ordered to conduct defensive patrols to protect the Hawaiian Islands during the pivotal Battle of Midway. She returned to Pearl Harbor on 9 June to prepare for her first war patrol in the Aleutians. On 5 July, Finback made first contact with the enemy when she attacked two Japanese destroyers before enduring a barrage of depth charge attacks that sent her deep. During Finback’s maiden war patrol, she was tasked with two special missions—a reconnaissance of Vega Bay, Kiska, on 11 July, and a surveying operation at Tanaga Bay one month later. She returned to Pearl Harbor on 23 August for refit.

A month later, Finback departed Pearl Harbor for her second war patrol off the waters of Taiwan. On 14 October, Finback spotted a convoy of four enemy craft guarded by a patrol vessel. The submarine launched torpedoes at the two largest vessels, sinking Japanese army transport Teison Maru. Four days later, she inflicted heavy damage on a large freighter, and on 20 October, Finback sent another large freighter below the waves. Rounding out the patrol, Finback exchanged gunfire with an enemy sampan that was subsequently sunk before she returned to Pearl Harbor on 20 November. During her third war patrol, Finback served as an escort for a carrier task force and sank an enemy patrol boat on 17 January 1943. She returned to Midway for refitting about three weeks later.

On Finback’s fourth war patrol, she was tasked with scouting shipping lanes between Rabaul and the Japanese home islands. On 21 March, the submarine inflicted heavy damage on a large cargo ship, and from 24–26 March, stalked an enemy convoy. She fired three torpedoes at each of the two larger ships in the convoy, but was forced deep by depth charging. Running low on fuel, Finback was forced to break contact and made way for Wake Island and Midway. On 5 April, the crew of Finback spotted an enemy ship beached that had been previously damaged by USS Tunny (SS-282). Finback deployed a torpedo into the bowels of the stricken vessel which was later determined to be the Japanese troop ship Suwa Maru. The boat returned to Pearl Harbor for refitting later that month.

On her fifth war patrol, Finback patrolled off Taiwan, and along the shipping lanes from the Japanese home islands to the Marshalls. On 27 May, the submarine sank an enemy cargo ship and then sent another to the ocean’s floor on 7 June. Four days later, Finback sent yet another enemy vessel to its watery grave. After refitting at Fremantle, Australia, the submarine steamed on her sixth war patrol along the Java coast. On 30 July, Finback made contact with the enemy and subsequently sank a freighter with her gunfire. Four days later, Finback sent another cargo ship below the waves. On 10 August, she inflicted heavy damage on a merchantman, and nine days later, encountered two small mine planters, a tug, and an inter-island steamer. Finback attacked all but the tug with surface gunfire leaving the ships heavily damaged. She broke contact with the enemy vessels due to a dwindling supply of ammunition.

After a major overhaul at Pearl Harbor, Finback set sail for the South China Sea on her seventh war patrol that was characterized by heavy seas, few contacts, and continual sightings of patrol planes. Nevertheless, on New Year’s Day 1944, Finback sank a large tanker, and later that month, sank a fishing trawler and badly damaged another enemy vessel. After refitting again at Pearl Harbor, Finback set sail on her eighth war patrol off Truk in the Caroline Islands. Although at first she was prevented from launching attacks because of her assignment as lifeguard for carrier air strikes on targets in the Carolines, Finback reared her lethal head on a six-ship convoy on 12 April. She attacked four of the ships before heavy counter attacks sent the submarine deep. On 16 April, while on a reconnaissance of Oroluk Atoll, the boat fired on a steamer and a lookout tower on the atoll. Three days later, Finback sank another sampan then sailed to Pearl Harbor for refit.

During her ninth war patrol off the Palaus and west of the Marianas, Finback was once again assigned lifeguard duty during aircraft strikes covering the opening of the Marianas operation. She returned to Majuro 21 July 1944, then steamed to the Iwo Jima, ChiChi Jima, and HaHa Jima area of operations near the Bonin Islands where she was assigned lifeguard duty on her tenth war patrol. Finback’s crew rescued multiple downed pilots during some of the heaviest fighting of the war. One of the fortunate aviators rescued was Lieutenant (j.g.) George H.W. Bush who would go on to become the 41st president of the United States.

On her eleventh war patrol, she sank a freighter on 16 December, and on her twelfth and final war patrol in the East China Sea saw little action. The Japanese surrendered ending World War II while she was at Pearl Harbor for an overhaul. Finback spent the next few years training young submariners before she reported to the Atlantic Reserve Fleet for inactivation on 4 January 1950. Finback was decommissioned later that year.

Finback received 13 battle stars for her World War II service—nine of her 12 war patrols were designated as “successful,” and she was credited with sending 59,383 tons of Japanese shipping to the ocean’s floor. 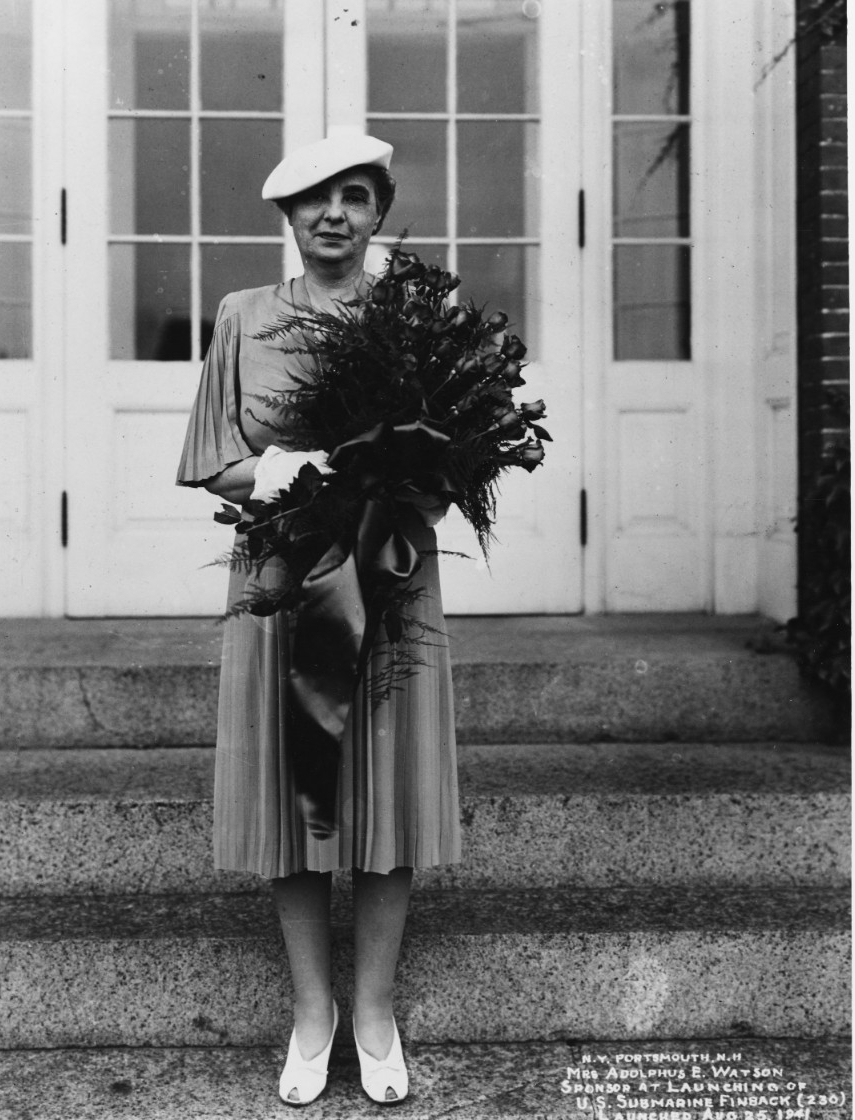 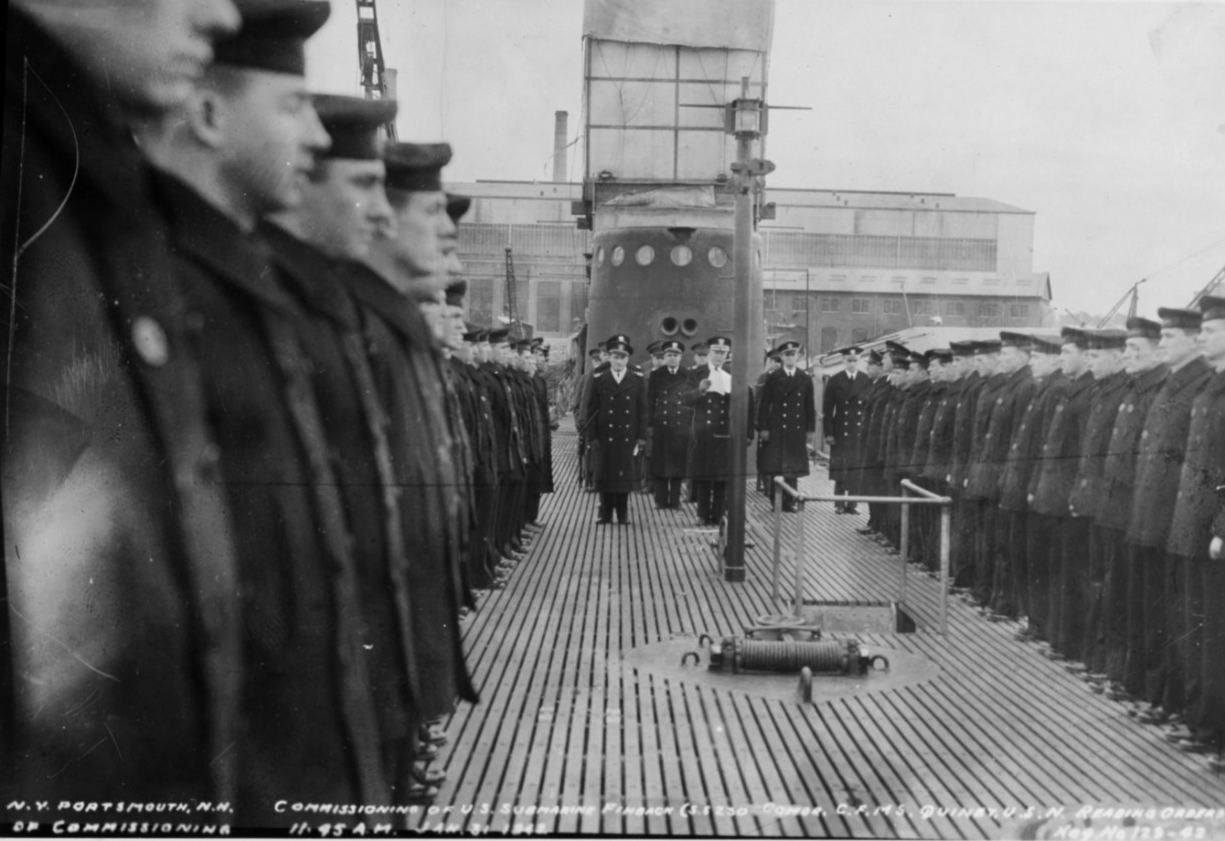 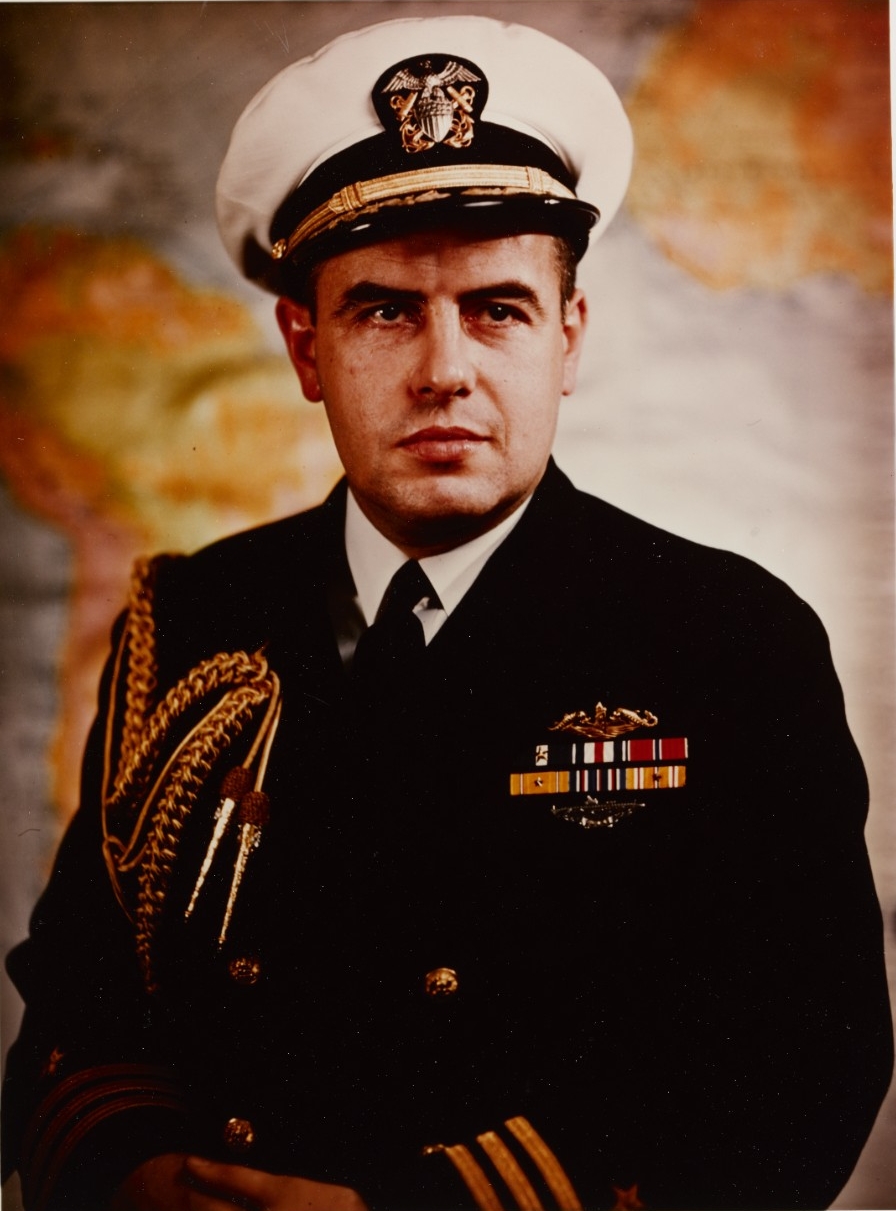 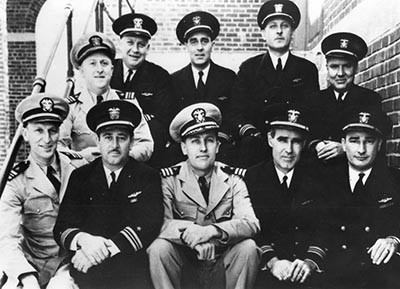 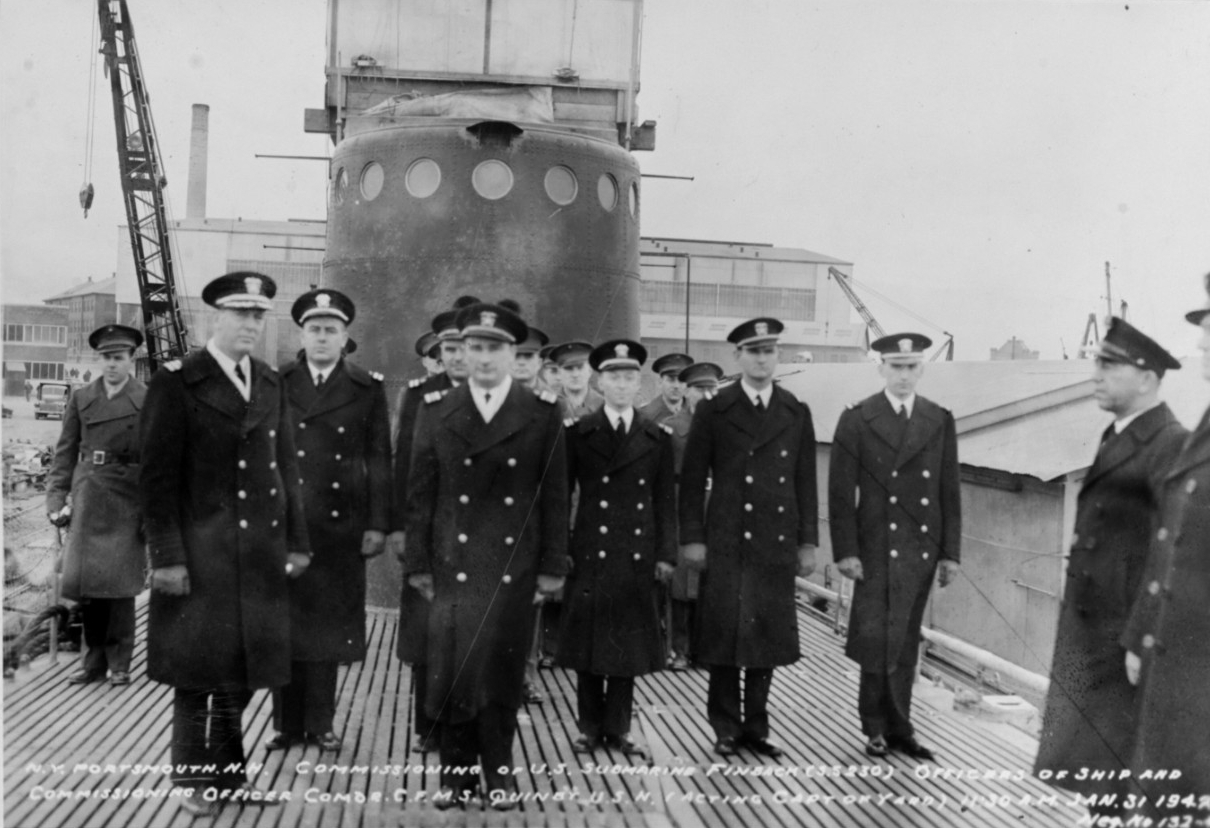 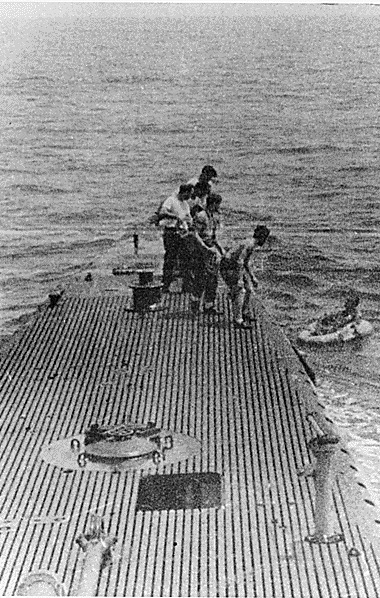 Lieutenant (j.g.) George H.W. Bush rescued by crewmembers on USS Finback (SS-230) after he was shot down while on a bombing run over the island Chi Chi Jima, 2 September 1944. National Archives identifier, 186382.