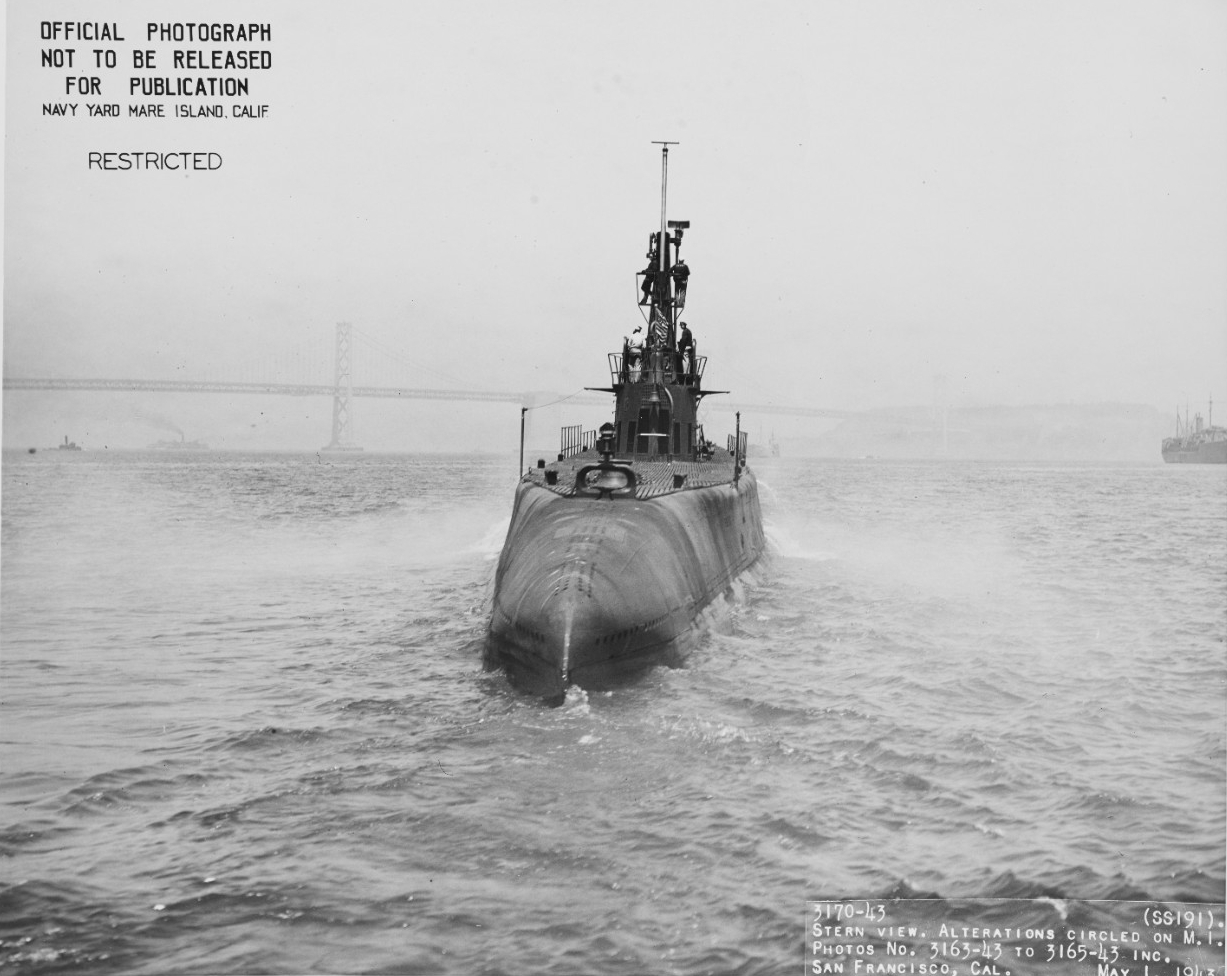 USS Sculpin (SS-191) in San Francisco Bay, California, following an overhaul, 1 May 1943. The San Francisco Bay Bridge is in the background. Official U.S. Navy photograph from the collections of the Naval History and Heritage Command, NH 97303.

Sargo-class submarine USS Sculpin (SS-191) was commissioned on 16 January 1939, and while on her initial shakedown cruise, was diverted to assist in the search for submarine Squalus. On 23 May during a test dive off the Isle of Shoals, Squalus suffered a catastrophic valve failure that sent her to the ocean’s floor about 240 feet below the surface. Upon arrival to the sunken submarine, Sculpin sighted a red smoke bomb and a buoy from Squalus. Personnel from Sculpin established communication first by phone and then by Morse code. Sculpin stood by as minesweeper Falcon (ASR-2) lowered the newly developed McCann rescue chamber—a revised version of a diving bell invented by Commander Charles B. Momsen—and, over the next 13 hours, rescued 33 survivors from the stricken submarine. Four Navy divers involved in the rescue and subsequent salvage of Squalus received the Medal of Honor for their efforts.

Following the extraordinary rescue operation, Sculpin participated in training off the U.S. east coast before she was transferred to the Pacific Fleet. Sculpin was homebased at Pearl Harbor, Hawaii, for the next 18 months. On 23 October 1941, she departed Hawaii arriving in Manila two weeks later where she conducted local operations and training until the Japanese attacked Pearl Harbor on 7 December.

The next day, following attack the marked the United States entry into World War II, Sculpin, along with USS Seawolf (SS-197), escorted USS Langley (AV-3), and USS Pecos (AO-65) to the San Bernadino Strait in the Philippines and from there took up station. On the night 10 January 1942, Sculpin intercepted two enemy ships scoring hits on the lead ship. Forced to dive due to subsequent enemy gunfire, the results of the attack were not confirmed. On her second war patrol, Sculpin was in the Molucca Sea, east of the Celebes. On 4 February, Sculpin torpedoed a Japanese destroyer inflicting heavy damage on the enemy ship. Japanese records would later reveal Suzukaze was forced to run aground after the attack to avoid sinking. Three days later, Sculpin approached another Japanese destroyer, but was detected and forced to dive. She escaped after enduring four hours of relentless depth charge attacks. Ten days later, she approached another destroyer, but was again detected. Sculpin sustained damage to her starboard main controller and starboard shaft in the ensuing depth charge attacks. At the end of February, she set sail for Exmouth, Australia, for repairs.

Sculpin’s third war patrol was plagued by malfunctioning torpedoes, as were many of her sister submarines during the early days of the Pacific War. Her fourth war patrol in the South China Sea began again with another torpedo malfunction. However, over the course of the patrol, she managed to cause heavy damage to an enemy tanker and cargo ship. In the waters of the Bismarck Archipelago, Sculpin commenced on her fifth war patrol. After scoring two hits on an enemy cargo ship, Sculpin scored her first confirmed kill of the war on 7 October 1942 when she sent the 4,731-ton transport Naminoue Maru below the waves. A week later in the same general area, Sculpin intercepted a three-ship convoy. As the escort destroyer conducted a patrol sweep, Sculpin waited until it was on the opposite side of the convoy before the boat unloaded a spread of four torpedoes at the 2,000-ton cargo ship Sumoyoshi Maru sending it to a watery grave. Four days later, before concluding the war patrol, Sculpin damaged the light cruiser Yura. On her sixth war patrol, Sculpin endured heavy enemy depth charge and gunfire attacks while stalking a Japanese carrier off Truk. She had no confirmed sinkings during the patrol.

After a prolonged overhaul period at San Francisco, California, Sculpin’s seventh war patrol was conducted off the northwest coast of Honshu in the summer of 1943. Three days after arriving on station, Sculpin damaged light carrier Hiyo, and a few days later, damaged a cargo ship. After the attack, she was forced to dive and run silent to avoid vigorous enemy countermeasures. She ended the patrol by destroying two sampans by gunfire before returning to Midway. Sculpin’s eighth war patrol was off the Chinese coast and Formosa Strait. On 9 August, her torpedoes sent cargo transport ship Sekko Maru below the waves. On 21 August, Sculpin sent a spread of torpedoes at an armed cargo ship, but they were duds. A similar incident happened on 1 September when a torpedo struck an enemy ship’s hull, but did not explode.

Following a brief overhaul at Pearl Harbor, Sculpin departed on her ninth war patrol in the waters north of Truk, where she was to intercept and attack Japanese ships departing for the upcoming invasion of Tarawa in the Gilbert Islands. Sculpin and two other submarines were to form “wolfpacks” in an effort to conduct coordinated attacks on the Japanese. Captain John P. Cromwell was onboard Sculpin to coordinate the attacks. After refueling at Johnston Island, Cromwell was ordered to commence the attacks on 29 November. After the submarine failed to acknowledge receipt of the orders, the message was repeated 48 hours later. The submarine was presumed lost about a month later.

Sculpin’s final story was told by surviving crewmembers, who were liberated from Japanese prisoner of war camps at wars end. On 16 November, Sculpin arrived in the patrol area, and two days later, made radar contact with a large, high-speed enemy convoy. The following morning, Sculpin surfaced to attack, but after detection, the enemy started to zigzag towards her making it difficult to score a hit. The Japanese convoy then changed course. Sculpin dove and then resurfaced to attempt another attack. When the boat surfaced, a rear guard destroyer was discovered only 600 yards away. Sculpin crash-dived surviving the first salvo of depth charges. A second wave of attacks caused only minor damage to the submarine. After evading the enemy destroyer in a rainsquall, Sculpin attempted to come to periscope depth, but the depth gauge was damaged—stuck at 125 feet. Sculpin was detected by enemy sonar and she dove. The enemy rained 18 depth charges on Sculpin causing significant damage. Massive amounts of water began to enter the submarine making her an easy target for the Japanese. Another depth charge attack knocked out Sculpin’s sonar, leaving her running blind.

After realizing the submarine was dead in the water, Commander Fred Connaway ordered the doomed boat to surface to give the crew a chance to escape. Sculpin’s gunners manned the deck, but they were no match for the enemy destroyer’s main battery. A shell hit the conning tower killing the bridge watch team, the gun crew, and the submarine’s commander. The ship’s senior surviving officer, Cromwell, ordered the submarine to be scuttled. Cromwell, who possessed vital information on the upcoming assault on the Gilbert Islands and other important future operations, feared he might reveal the plans if he was captured. The Japanese were infamous for their barbaric techniques in extracting information, which included torture and the use of drugs. Cromwell refused to be captured or abandon the submarine. He went down with the submarine, giving his life valiantly for his country. Cromwell received the Medal of Honor posthumously for extraordinary heroism.

Destroyer Yamagumo retrieved more than 40 of Sculpin’s crew. After ten days of torture and questioning at a Japanese naval base at Truk, the prisoners of war were loaded on two aircraft carriers headed for Japanese prison camps. Escort carrier Chuyo carried half of the POWs. On 2 December, USS Sailfish (SS-192) torpedoed and sank Chuyo. The attack killed all but one of the American prisoners onboard. The remainder of Sculpin’s survivors, who were on a separate aircraft carrier, made it safely to Japan and worked in copper mines for the duration of the war. Ironically, Sailfish was previously named Squalus. It was the submarine Sculpin helped rescue back in 1939 off the Isle of Shoals. 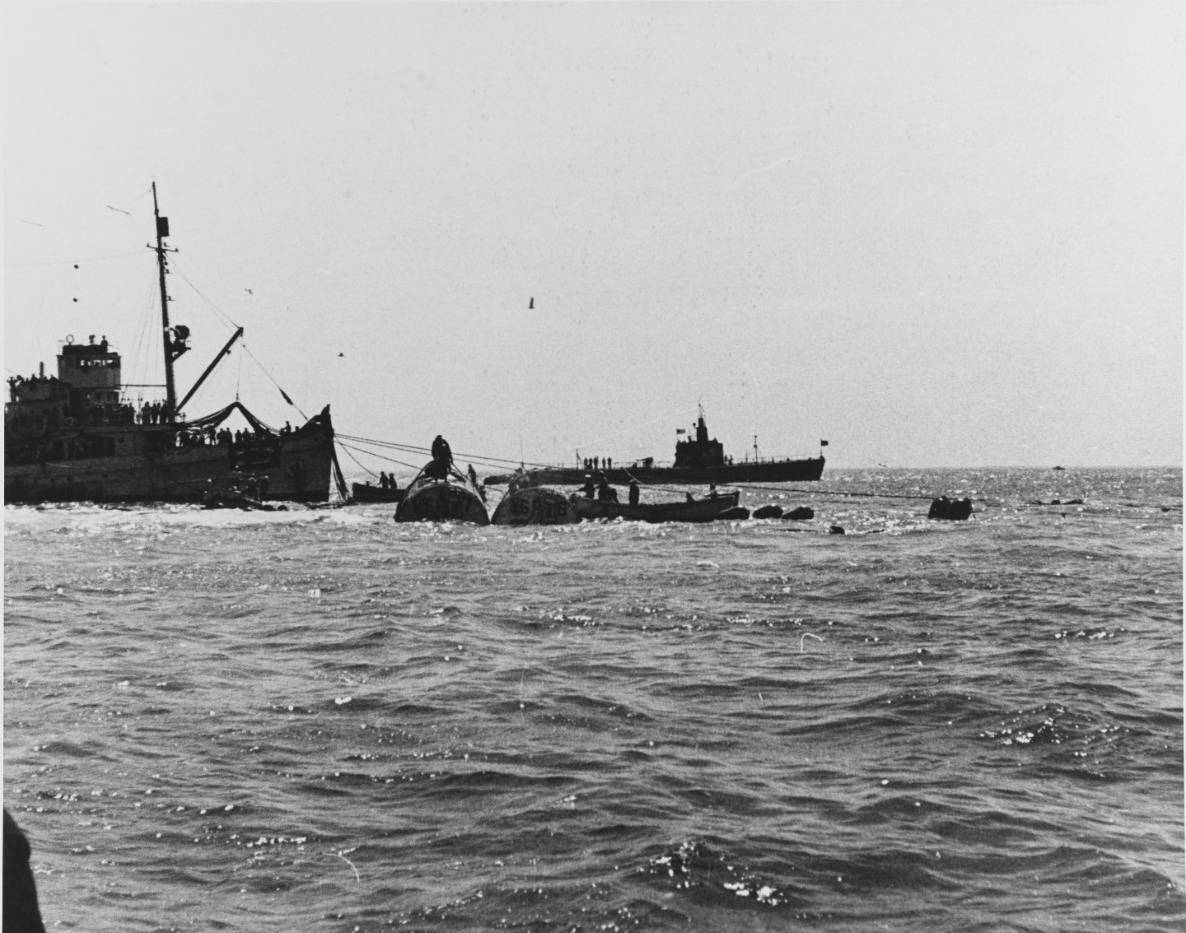 Crewmembers working on salvage pontoons over sunken submarine Squalus during salvage operations off the New Hampshire coast in the summer of 1939. USS Falcon (ASR-2) is at left and USS Sculpin (SS-191) is in the center background. Official U.S. Navy photograph, USN 1149030. 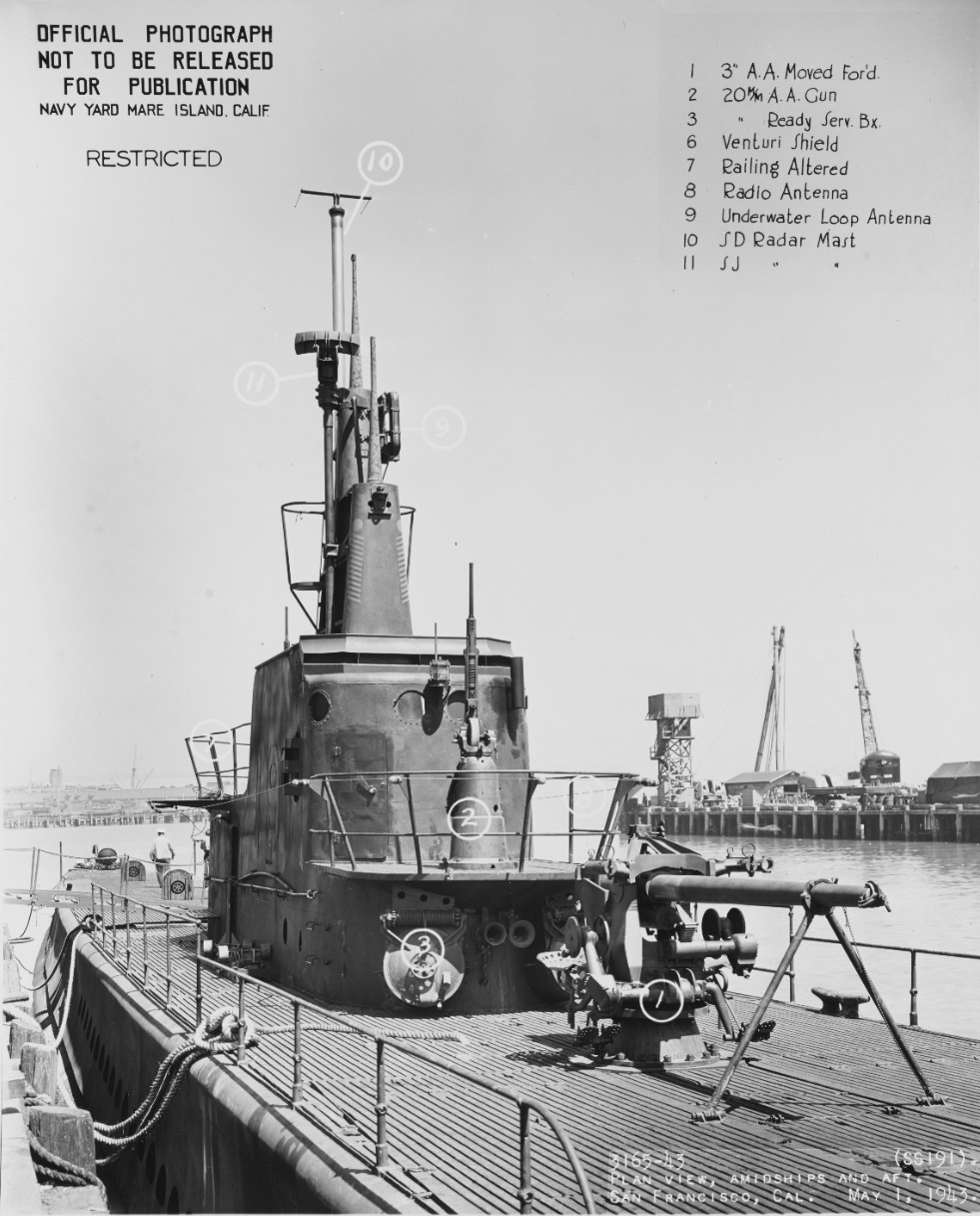 USS Sculpin (SS-191) at the Bethlehem Steel Company Shipyard, San Francisco, California, following an overhaul, 1 May 1943. This view of the forward end of her sail identifies changes recently made to the ship. Official U.S. Navy photograph from the collections of the Naval History and Heritage Command, NH 97305. 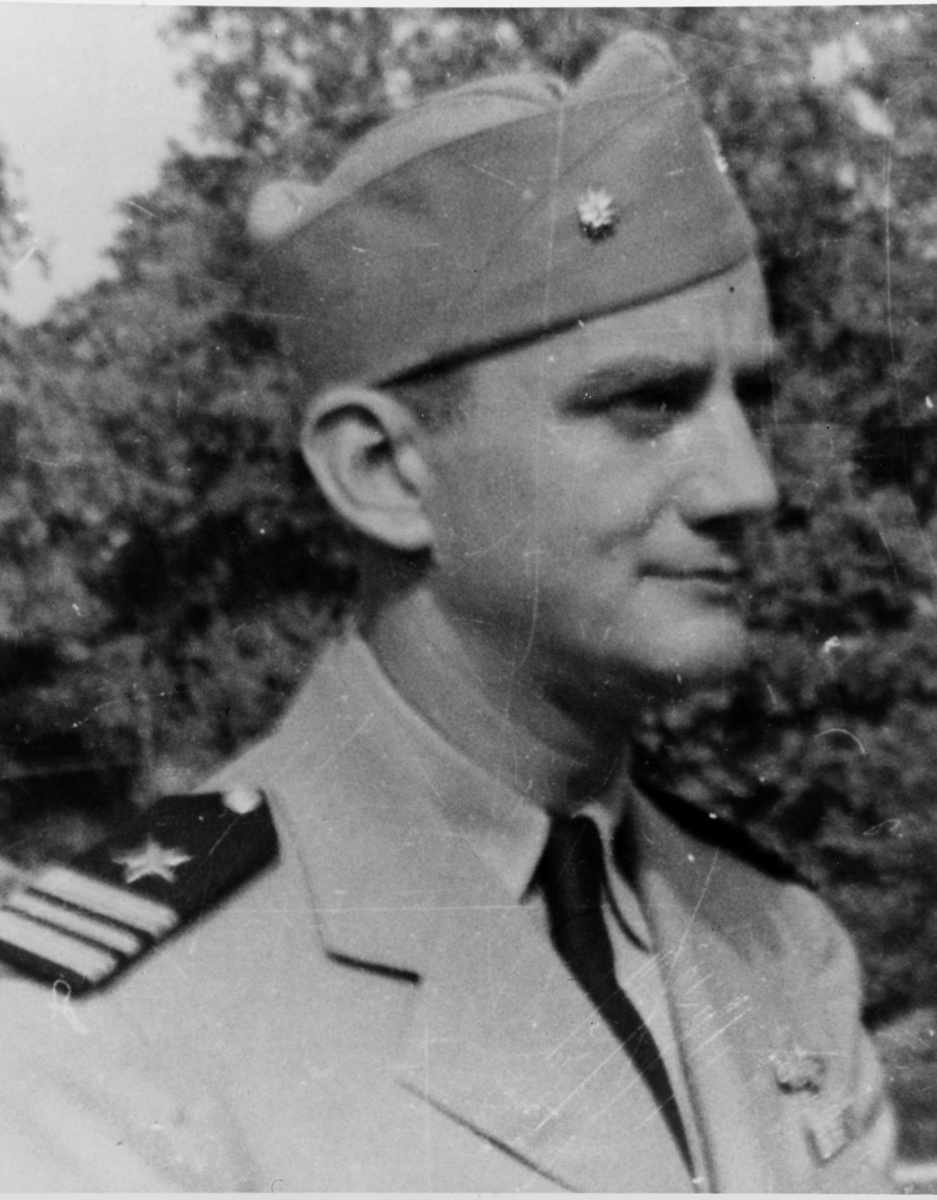 Photographed circa 1942. On 19 November 1943, while in command of USS Sculpin (SS-191), Lieutenant Commander Fred Connaway was lost when his ship was sunk. This image was published in the book United States Submarine Losses in World War II. U.S. Naval History and Heritage Command photograph, NH 50661. 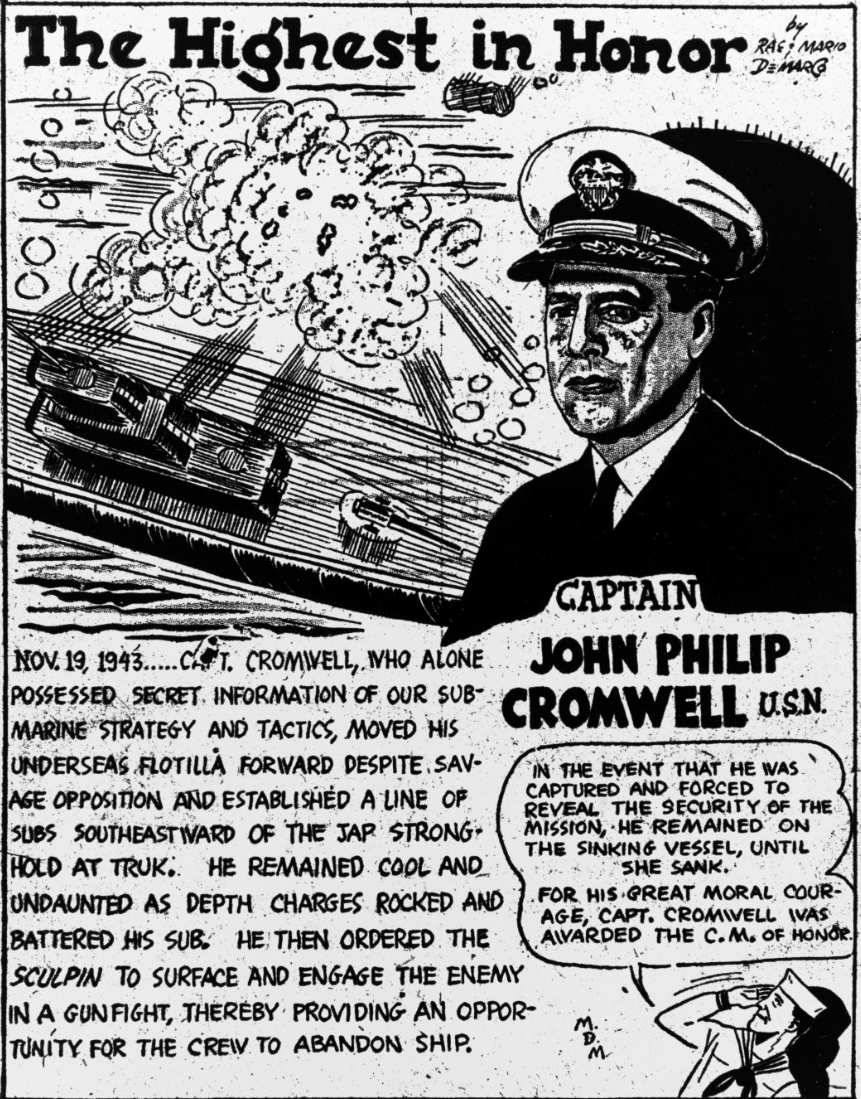 Vignette providing details on Captain John P. Cromwell, who received the Medal of Honor for actions taken during the loss of USS Sculpin (SS-191) on 19 November 1943. Naval History and Heritage Command photograph, NH 86993. 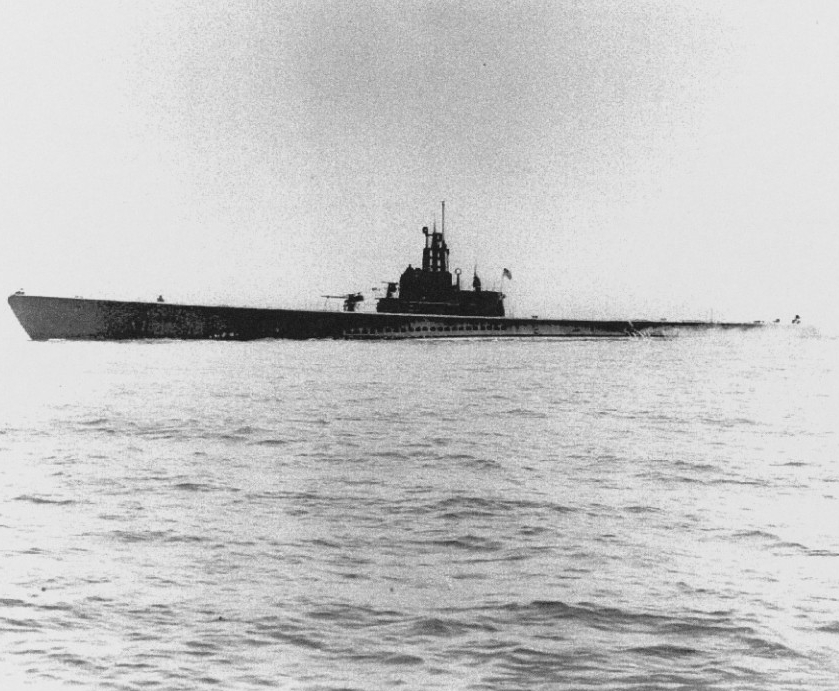 USS Sculpin (SS-191) off San Francisco, California, on 1 May 1943, following an overhaul. Official U.S. Navy photograph from the collections of the Naval History and Heritage Command, NH 97309. 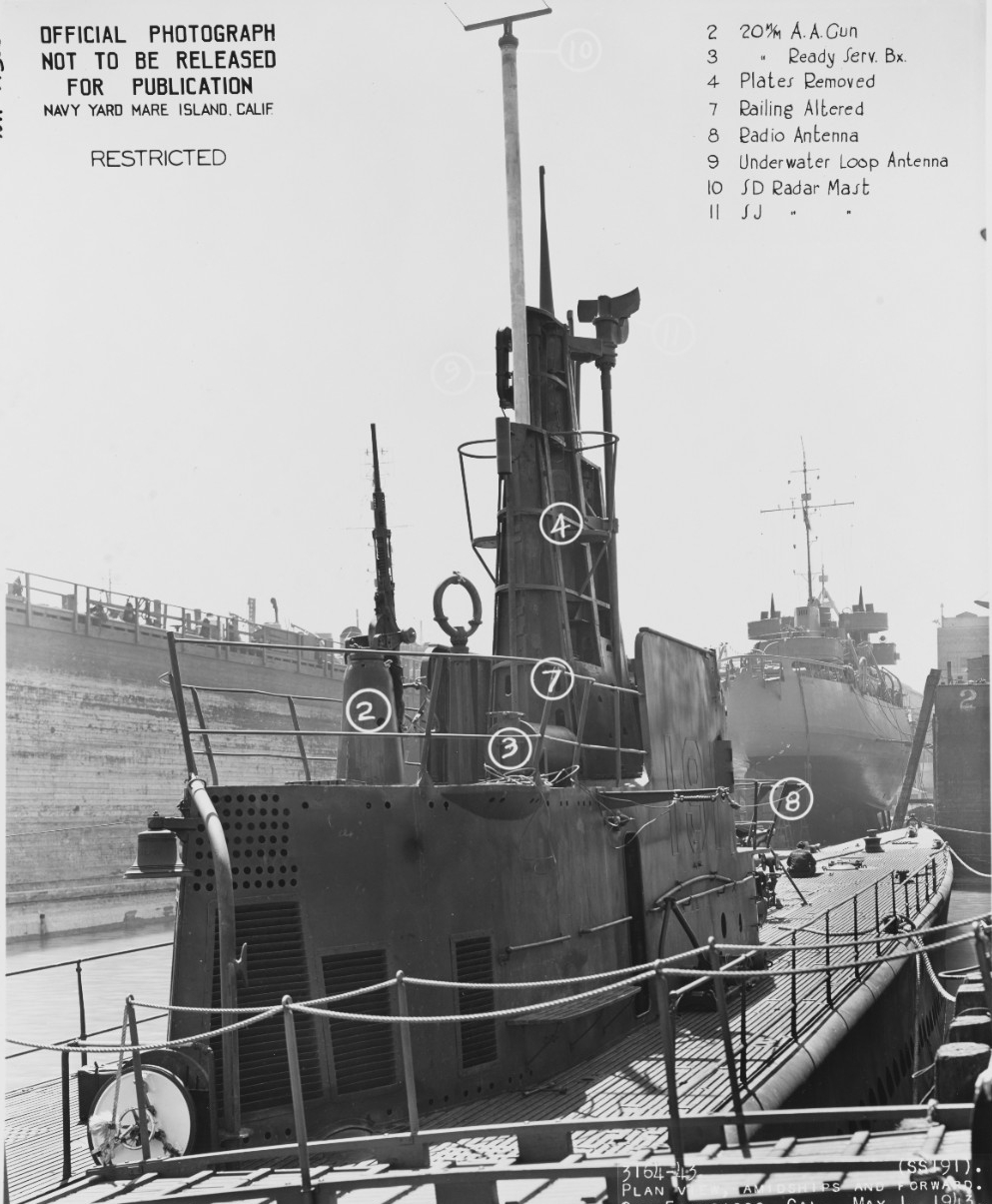 USS Sculpin (SS-191) at the Bethlehem Steel Company Shipyard, San Francisco, California, following an overhaul, 1 May 1943. This view of the after end of her sail identifies changes recently made to the ship. The Coast Guard lighthouse tender Balsam (WAGL-62) is in the floating drydock in the right background. Official U.S. Navy photograph from the collections of the Naval History and Heritage Command, NH 97306. 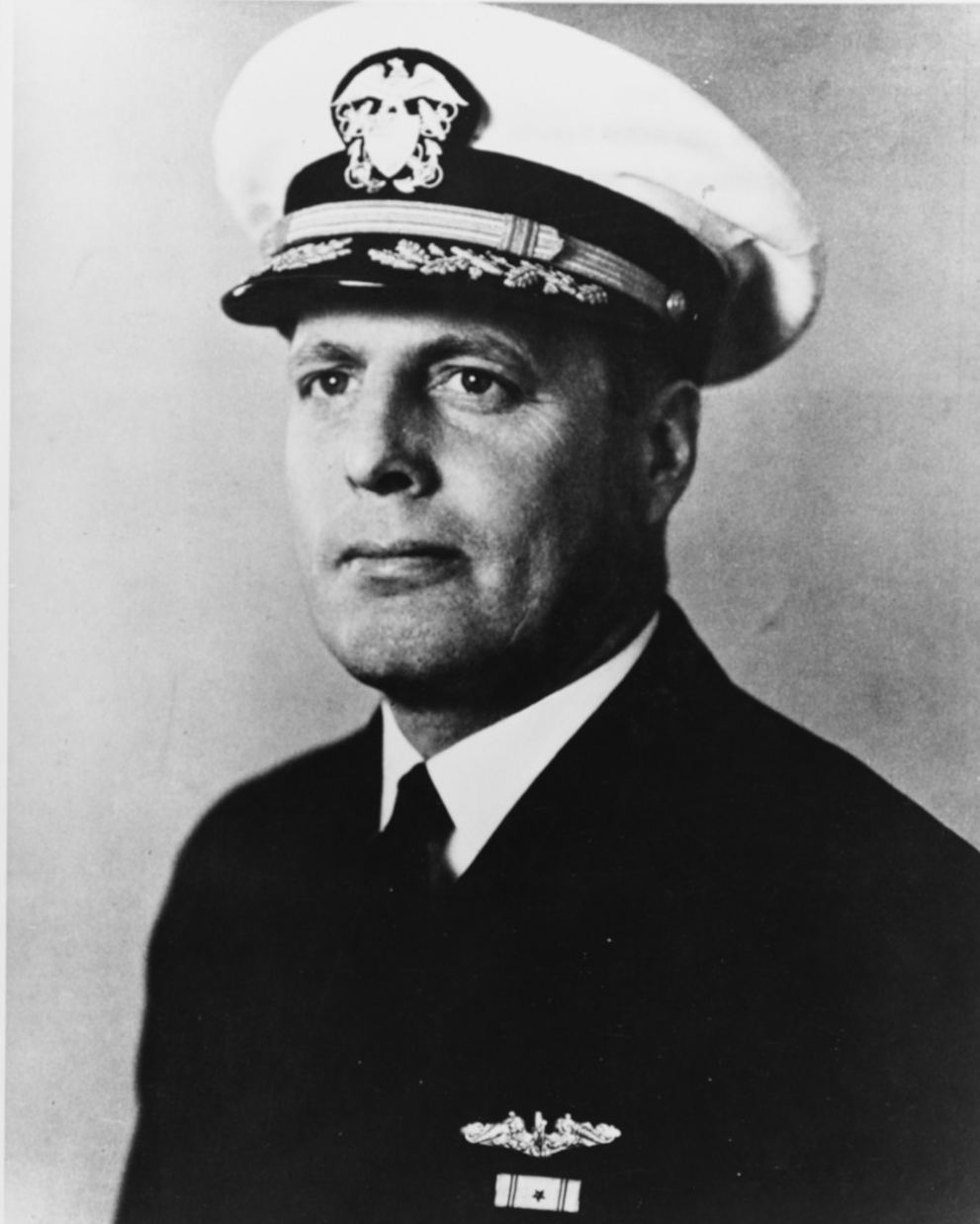 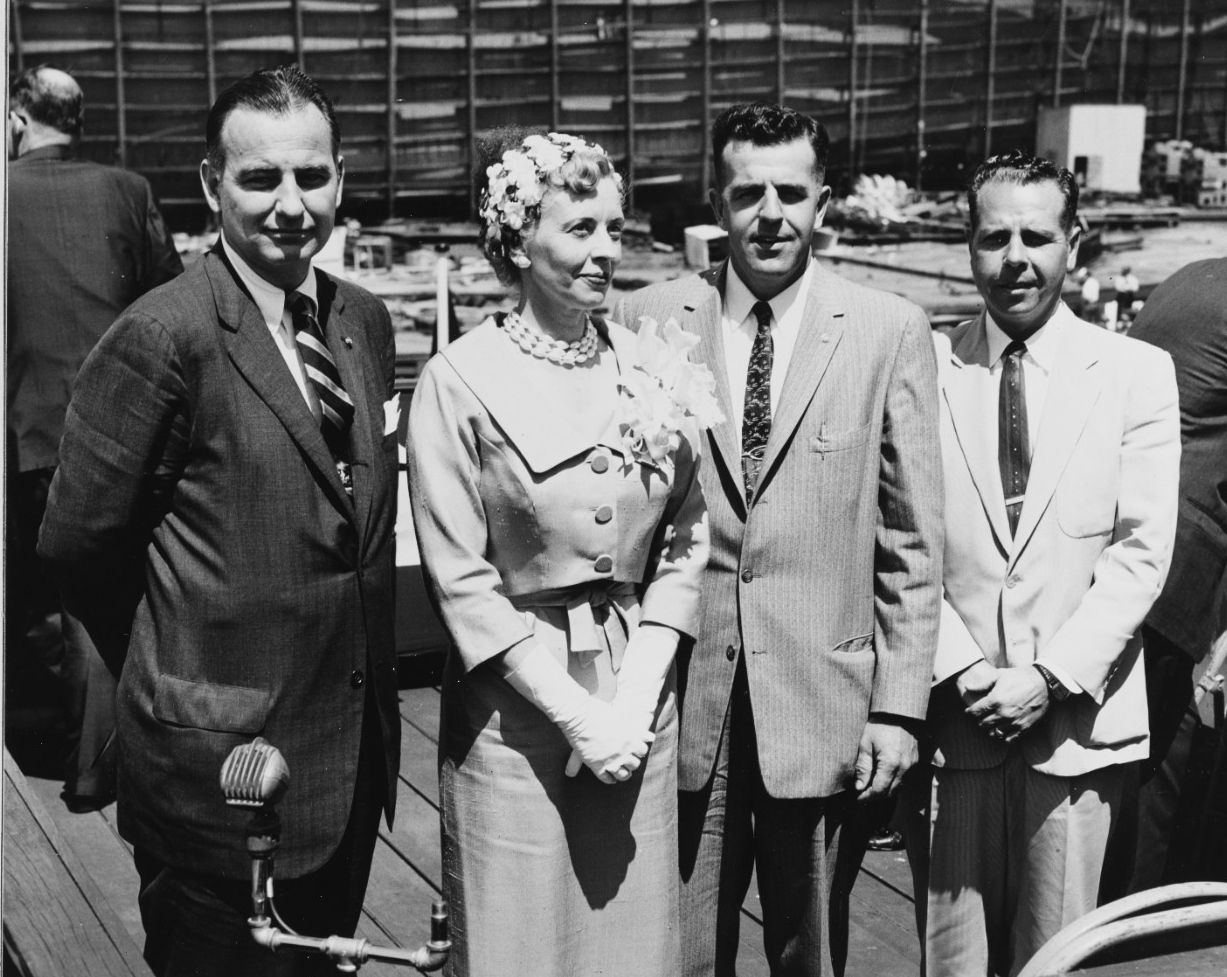