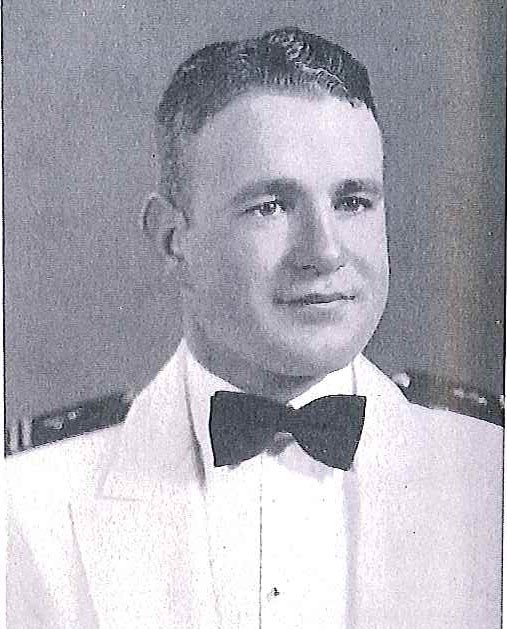 Joseph Rollie Defrees, Jr., was born in Newport, Rhode Island, on September 12, 1920, son of Rear Admiral Joseph R. Defrees, USN, and Mrs. (Bernice Fairbanks) Defrees. He attended Western High School and Columbian Preparatory School in Washington, DC, and entered the US Naval Academy Annapolis, Maryland, on appointment from Illinois, on June 16, 1938. He was graduated and commissioned Ensign on December 19, 1941 (Class of 1942 – course accelerated due to National Emergency), and was promoted to Lieutenant (junior grade) to date from October 1, 1942, and Lieutenant, from October 1, 1943.

After graduation from the Naval Academy, he was ordered to the Twelfth Naval District Headquarters, San Francisco, California, for duty, and on February 19, 1942, he joined USS Nautilus. He served on board that submarine until September 4 of the same year, when he was detached for submarine instruction at the US Submarine Base, New London, Connecticut. He completed the course, and on January 22, 1943, reported to Commander Submarine Force, US Pacific Fleet, for assignment to USS Sculpin.

He was serving on board that submarine when the Sculpin made her Sixth War Patrol in the Solomon Islands and her Seventh in the Aleutians in May and June 1943. After her Eighth War Patrol in the East China Sea, when she sank a freighter-transport, Sculpin was lost north and east of Turk due to depth charges by an enemy destroyer, on November 19, 1943. Lieutenant Defrees was reported Missing in Action on November 30, 1943, his status changed later to Died on November 19, the result of enemy action.

Lieutenant Defrees was posthumously awarded a Letter of Commendation by the Commander in Chief, Pacific Fleet, as follows: “For outstanding achievement as an Assistant Approach Officer of the USS Nautilus in action against enemy Japanese forces during the First War Patrol of that vessel in the enemy-controlled waters of the Japanese Empire from June 10 to July 11, 1942. Efficiencly fulfilling his assigned duties, Lieutenant Defrees rendered valuable assistance to his commanding officer in carrying out aggressive torpedo attacks against hostile shipping. By his understanding of attack problems and his skill in operating fire control equipment, Lieutenant Defrees contributed materially to the sinking of an enemy 1500-ton destroyer and a patrol vessel and the damaging of three other Japanese vessels, thereby upholding the highest traditions of the United States Naval Service.”

He was also posthumously awarded the Purple Heart Medal and was entitled to the American Defense Service Medal, Fleet Clasp; the Asiatic-Pacific Campaign Medal with two operations stars; and the World War II Victory Medal.