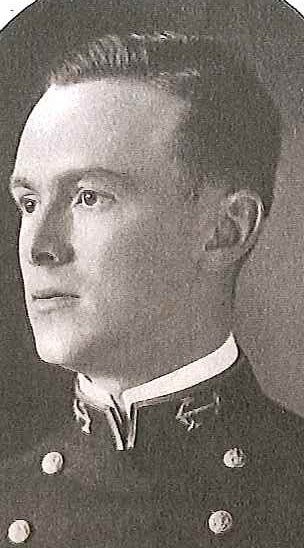 Commodore Carroll, born in February 17, 1886, in Miden, Louisiana, was appointed a midshipman from the Fourth Louisiana District, and entered the United States Naval Academy, Annapolis, Maryland, on May 2, 1905. He was graduated in 1909 and served the two years at sea then required by law before being commissioned Ensign. He was commissioned on June 5, 1911, and was promoted Lieutenant (junior grade) June 5, 1914; Lieutenant, June 5, 1917; temporary Lieutenant Commander during the First World War, and commissioned in that rank June 3, 1921; and subsequently advanced through the grades to the rank of Commodore on July 13, 1945. He was transferred to the Retired List of the Navy in that rank on December 1, 1947.

Upon graduation in 1909, Commodore Carroll had duty until June 1913, in USS Kansas, serving the last year aboard as Assistant to the Senior Engineering Officer, and served in  USS Balch during the Mexican Campaign until September, 1914. He reported on September 28, 1914 to the Postgraduate School, Annapolis, Maryland, for instruction in electrical engineering, continued instruction at Columbia University, New York, at the plant of General Electric Company, Schenectady, New York, and completed the course at Massachusetts Institute of Technology, Boston, Massachusetts.

From April 1 to June 6, 1917, he had duty at Navy Yard, Philadelphia, in connection with fitting out USS Vixen and after a short period aboard, had duty in connection with the Kronprinzessin Cecile, a German vessel, prize of war, renamed USS Mount Vernon, and upon her commissioning, July 28, 1917, he was designated Engineering Officer, serving as such until February 22, 1918. He next had duty in connection with fitting out USS New Mexico, and upon her commissioning, May 20, 1918, he served aboard throughout the remainder of the war, and as Engineering Officer from March 28, 1919 until detached on July 7, 1920.

A month’s duty in July- August, 1920 in the Bureau of Steam Engineering, Navy Department, Washington, D.C, was followed by consecutive service in command of destroyers USS Fox, USS Gilmer, and USS Toucey, from August, 1920 to May, 1921, with additional duty as Flotilla Engineering Officer of Flotillas 1 and 3. Commodore Carroll then reported for duty at the Naval Observatory, Washington, DC, and in December, 1923, proceeded to New York, New York, thence to Brazil, for duty as a member of the United States Naval Mission to Brazil, at Rio de Janeiro. Under date January 1, 1924, he was assigned duty afloat with the Brazilian Navy, continuous until detached in March 1925. He returned to the United States, and on April 14, 1925 had orders to duty in USS Nevada, and served more than two years as Navigator of that Battleship. From August 1927 until June 1929, he was aide on the staff of Commander Chief, Asiatic Fleet, USS Pittsburgh, flagship, operating in the Yangtze River, China, with additional duty as Fleet Gunnery Officer.

Completing the senior course at the Naval War College, Newport, Rhode Island, in May, 1930, Commodore Carroll served for the next two years on the staff of that College. From June, 1932 to June, 1934 he was in successive command of Destroyer Division 16, and Destroyer Division 12, Destroyer Squadrons, Battle Force, US Fleet. His next duty, in the Office of Naval, Navy Department, from July, 1934 until August, 1937, was followed by one month at Headquarters, Sixteenth Naval District, Cavite, Philippine Islands, to await assignments to sea duty; he went aboard USS Blackhawk and served for six weeks on the staff of Commander in Chief, Asiatic Fleet, and in USS Augusta; from February 1938 until June, 1939 he was in command of Destroyer Squadron Five, and until December 1939, he was again Chief of Staff and Aide to Commander in Chief Asiatic Fleet. He returned to Cavite in December, 1939, and remained on duty there in connection with war plans until March, 1940. Returning to the United States in USS Henderson, he reported for duty on the staff of the Naval War College, Newport, Rhode Island remaining until November 8, 1941.

Commodore Carroll was commanding USS Mississippi in the Atlantic when the United States declared war upon Japan and Germany, December 8, 1941, but was ordered shortly thereafter to the Naval War College, Newport, to serve on the staff from June to October, 1942. He reported to Headquarters of the Commander in Chief, United States Fleet, Washington, D.C. on October 1, 1942, and served in the Office of the Chief of Naval Operations from November 10, 1942 until January 16, 1943, and thereafter joined the United States Naval Forces, Southwest Pacific, to serve afloat in that area, first as Commander, Escort and Minecraft vessels, Southwest Pacific Force; later in command of Task Force 78, until October 1943. Returning to the Navy Department, Commodore Carroll again served as Headquarters, Commander in Chief, US Fleet, from February until August 1944, and the next month reported for duty on the staff of Commander Seventh Fleet. In July, 1945, in the rank of Commodore, he became deputy chief of staff to the Commander Seventh Fleet. He was awarded the Legion of Merit and the Bronze Star Medal for outstanding service during this period. The citation follow:

Legion of Merit (with Combat “V”)

“For exceptionally meritorious conduct in the performance of outstanding services to the Government of the United States during operations against enemy Japanese forces in the Southwest Pacific War Area from January to August, 1943, and from September 1944, to November 1945. As Commander Escort and Minecraft Force, Commodore Carroll performed his duties skillfully and efficiently and, while serving on the Staff of Commanding General Southwest Pacific Area, contributed materially to the success of our operations in New Guinea and the Philippine Islands. On temporary duty from December 30, 1944, to January 17, 1945 with the Staff of Commander Third Amphibious Force, he participated in the amphibious attack on Lingayen Gulf, and later as Deputy Chief of Staff on the Staff of Commander Seventh Fleet, assisted in the preparation for the invasion of Japan and in the planning and execution of the occupation of China and Korea. By his professional skill and devotion to duty, Commodore Carroll contributed materially to the success of our war against Japan and upheld the highest traditions of the United States Naval Service.”

“For meritorious service while attached to the Commander Seventh Fleet and while serving with the Joint Supply Survey Board during operations against enemy Japanese forces in the Pacific War Area from September 1944, to July 1945. During this period of intensive operations against the enemy, Commodore Carroll carried out several inspections of naval facilities in the forward areas to determine the most effective employment of valuable material. In addition. He advanced recommendations which were established in logistics plans for the Southwest Pacific area and aided materially in solving many problems of supply distribution. By his outstanding ability and devotion to duty, Commodore Carroll contributed materially to the success of forces in their sustained fight against the Japanese Empire, and his conduct throughout were in keeping with the highest traditions of the United States Naval Forces.”

Returning to the United States early in 1946, Commodore Carroll reported on April 23 to the Naval War College, Newport, Rhode Island for temporary duty, and continued to serve in that assignment until relived of active duty pending his retirement, which was effective on December 1, 1947.