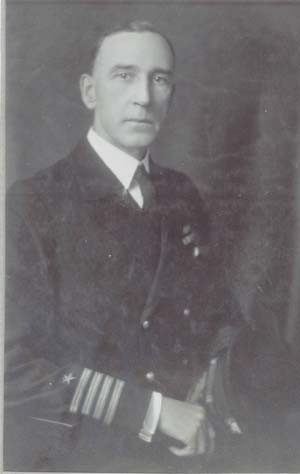 Alfred Wilkinson Johnson was born on 18 November 1876 in Philadelphia, Pennsylvania. He was appointed Naval Cadet (at large) by President Grover Cleveland and entered the United States Naval Academy, Annapolis, Maryland, in 1895. During the Spanish-American War, as a member of the First Class, he served on USS Massachusetts of the North Atlantic Squadron under the command of Rear Admiral W.T. Sampson, USN and later on USS Detroit. He returned to Annapolis in September 1898, and was graduated in January 1899. He served the two years at sea, then required by law before commissioning and was commissioned Ensign in 1901. Subsequently promoted, he attained the rank of Rear Admiral on 1 February 1933, and was advanced to Vice Admiral upon his retirement 1 December 1940.

Following graduation from the Naval Academy, he served successively on USS Newark, USS Texas, USS Detroit, USS Kearsage, and had duty in the Philippines during the insurrection aboard USS New York. He returned to the United States in 1903 and, after duty on the monitors USS Puritan and USS Lancaster, served on torpedo boats until 1907, commanding USS Rodgers and USS Wilkes.

From 1907 until 1910 he served as in instructor in the Department of Mathematics at the Naval Academy. During this assignment he made the midshipman's practice cruise on USS Hartford in the summer of 1908, and served as flag lieutenant to the commander of the Practice Squadron on the flagship USS Olympia in the summer of 1909. He joined USS Delaware as assistant engineer officer in 1910 and in 1911 was transferred to USS Nebraska, with duty as senior Engineer Officer. Upon detachment, he reported to the Office of Naval Intelligence, Navy Department, and from 10 April 1912 to 13 December 1913 served as US Naval Attaché to Santiago, Chile.

In 1914, after several months in command of the USS Benham, he had charge of fitting out USS Downes at the New York Shipbuilding Company, Camden, New Jersey, and commanded her briefly before his transfer in 1915 to USS Conyngham at William Camp and Sons, Philadelphia, Pennsylvania. He assumed command of that destroyer when she was commissioned on 21 January 1916. Conyngham was in the first destroyer division sent to Europe in April 1917, when the United States entered World War I and was based at Queenstown, Ireland. For his services in command of the Conyngham he was awarded the Distinguished Service Medal with citation as follows:

Distinguished Service Medal: "For exceptionally meritorious service in a duty of great responsibility as Commanding Officer of the USS Conyngham engaged in the important, exacting and hazardous duty of patrolling the waters infested with enemy submarines and mines, in escorting and protecting vitally important convoys of troops and supplies through these waters, and in offensive and defensive action, vigorously and unremittingly prosecuted against all forms of enemy naval activity; and especially for an attack upon an enemy submarine on October 19, 1917, during which attack Conyngham was directly over the submarine and dropped a depth bomb which is believed to have destroyed the submarine.

He fitted out and commanded the destroyer USS Kimberly early in 1918, and upon his return to the United States later that year reported for duty as aide to the commandant, New York Navy Yard and Third Naval District. He served as commander, Air Force, Atlantic fleet, while simultaneously commanding USS Shawmut and later USS Wright, in 1920 and 1921. Planes under his command made the first flight across the Caribbean to Panama and in June-July 1921 were engaged in bombing experiments with ex-German warships off the Virginia Capes. In 1922 he was on duty in the Bureau of Navigation, Navy Department, Washington, DC, and while there served as senior member of boards to (1) to revise the orders for gunnery and bombing exercises for aircraft and (2) to draw up a doctrine for aircraft in connection with fleet fire control. He was assistant chief of the Bureau of Aeronautics from 1923 to late in 1925, and in cooperation with the US Geological Survey, initiated the Aerial Photographic Survey of Alaska and the Aleutian Islands by naval aircraft.

From 1 January 1926 to 3 November 1927, he commanded the cruiser USS Richmond. After a tour of duty as director of Naval Intelligence, Navy Department, Washington, DC, he was appointed in June 1930, president of the National Board of Elections in Nicaragua, with additional rank of Envoy Extraordinary and Minister Plenipotentiary to Nicaragua. For service rendered, 1930 election, Nicaragua, he received the Medal of Merit, by the Government of Nicaragua.

He commanded the battleship USS Colorado in 1931 and was Assistant Chief of the Bureau of Navigation from 9 January 1932 to 5 May 1933. He was advanced to the rank of Rear Admiral in 1933 and, in that year, qualified as a Naval Aviation Observer. From August 1933 until June 1935 he served as commander, Patrol Plane Squadrons, U S Fleet. In January 1934 his squadrons made the first mass non-stop flight from the West Coast to Honolulu and to Midway Island. While in this command he developed the mobility and self-supporting qualities of the patrol plane squadrons by conducting their operations away from home bases for extended periods of time in distant theaters of activity to increase their usefulness to the fleet.

He was a member of the General Board from June 1935 to January 1938 when he assumed command of the Training Detachment, United States Fleet. In October 1938, his title was changed to Commander, Atlantic Squadron. While in command of the Atlantic Squadron, during the winter of 1938-1939, Admiral Johnson, collaborated with the Naval Research Laboratory scientists in conducting the first comprehensive radar experiments at sea. These experiments resulted in the developing of radar for fire control and contributed greatly to the defeat of Japan in World War II.

In November 1939 he reported for duty as a Member of the General Board. On 1 December 1940, having reached the age of retirement, he was transferred to the Retired List and advanced to the rank of Vice Admiral, in recognition of his being "specially commended for performance of duty in actual combat with the enemy during the World War.

The citation states further: ". . . Vice Admiral Johnson rendered invaluable assistance to all members of the Board during the early stages of hostilities and, by his superb ability and tact, was in large measure responsible for securing rights and privileges vitally needed by our forces in the conduct of the war and for the maintenance of cordial relations between the United States and Latin American countries. . ."

Vice Admiral Johnson was ordered relieved of all active duty on 13 August 1945.

The following foreign decorations have been conferred upon Admiral Johnson:

Order of St. Michael and St. George (WWII)
Companion of the Order of the Bath (WWII)

Order of the Aztec Eagle (WWII)