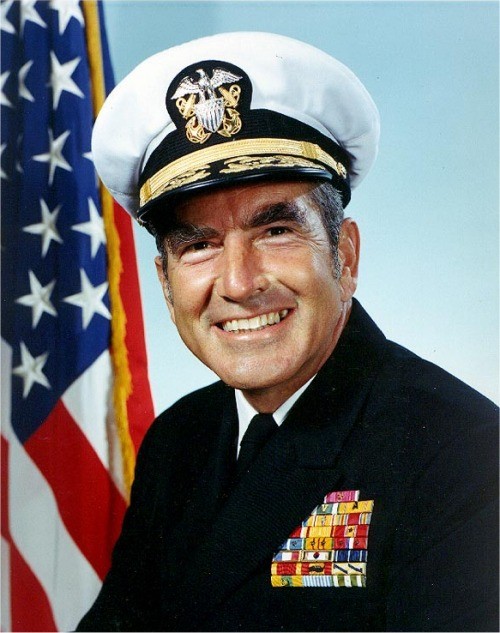 Served as Commander U. S. Naval Forces, Vietnam and Chief of the Naval Advisory Group, U. S. Military Assistance Command, Vietnam, from 1 October 1968 to 15 May 1970.

As Director of the Chief of Naval Operations Systems Analysis Group from August 1966 to August 1968, he organized and directed the Systems Analysis Division and served as Deputy Scientific Officer to the Center for Naval Analyses.

Served as Commander Cruiser-Destroyer Flotilla SEVEN from July 1965 to July 1966.

Eagle Scout.
Served as Commanding Officer of the first ship built from the keel up as a guided-missile ship USS Dewey (DLG-14)
Was prize crew officer of captured Japanese gunboat Ataka, captured at mouth of Yangtze River near end of WW II.
At age 44, the youngest naval officer ever promoted to Rear Admiral.
At age 49, the youngest four-star Admiral in U. S. naval history, and the youngest to serve as Chief of Naval Operations.

Elmo Russell Zumwalt, Jr., was born in San Francisco, California, on 29 November 1920, son of Dr. E. H. Zumwalt and Dr. Frances Zumwalt. He attended Tulare (California) Union High School, where he was an Eagle Scout and Class Valedictorian and the Rutherford Preparatory School, at Long Beach, California, before his appointment to the U. S. Naval Academy, Annapolis, Maryland, from his native state in 1939. As a Midshipman ho was President of the Trident Society, Vice President of the Quarterback Society, twice winner of the June Week Public Speaking Contest (1940, 1941) , Company Commander in 1941 and Regimental Three Striper in 1942, and participated in intercollegiate debating. Graduated with distinction and commissioned Ensign on 19 June 1942, with the Class of 1943, he subsequently progressed to the rank of Admiral, to date from 1 July 1970.

Following graduation from the Naval Academy in June 1942, he joined the destroyer USS Phelps, and in August 1943 was detached f or instruction in the Operational Training Command, Pacific, at San Francisco, California. In January 1944 he reported on board the USS Robinson, and for "heroic service as Evaluator in the Combat Information Center... (of that destroyer), in action against enemy Japanese battleships during the Battle for Leyte Gulf, 25 October 1944.. ." he was awarded the Bronze Star with Combat "V." The citation further states:

"During a torpedo attack on enemy battleships, Lieutenant Zumwalt furnished information indispensable to the success of the attack..."

After the cessation of hostilities in August 1945, until December 8th of that year, he commanded (as prize crew officer) HIMJS Ataka, a 1200-ton Japanese river gunboat with two hundred officers and men. In that capacity he took the first ship since the outbreak of World War II, flying the United States flag, up the Whangpoo River to Shanghai. There they helped to restore order and assisted in disarming the Japanese.

He next served as Executive Officer of the destroyer USS Saufley, and in March 1946 was transferred to the destroyer USS Zellars, as Executive Officer and Navigator. In January 1948 he was assigned to the Naval Reserve Officers Training Corps Unit of the University of North Carolina at Chapel Hill, where he remained until June 1950. That month he assumed command of USS Tills, in commission in reserve status. That destroyer escort was placed in full active commission at Charleston Naval Shipyard on 21 November 1950, and he continued to command her until March 1951, when he joined the battleship USS Wisconsin as Navigator.

"For meritorious service as Navigator of USS Wisconsin during combat operations against enemy North Korean and Chinese Communist forces in the Korean Theater from 23 November 1951 to 30 March 1952..." he received a Letter of Commendation, with Ribbon and Combat "V," from Commander Seventh Fleet. The letter continues: "As Navigator his competence and untiring diligence in assuring safe navigation of the ship enabled the commanding officer to devote the greater part of his attention to planning and gunfire Operations. His performance of duty was consistently Superior in bringing the ship through dangerously mined and restricted waters, frequently under adverse conditions and poor visibility. He assisted in the planning of the combat operations... (and) piloted Wisconsin into the closest possible inshore positions in which maximum effect could be obtained by gunfire..."

Detached from USS Wisconsin in June 1952, he attended the Naval War College, Newport, Rhode Island, and in June 1953 reported as Head of the Shore and Overseas Bases Section, Bureau of Naval Personnel, Navy Department, Washington, D. C. He also served as Officer and Enlisted Requirements Officer and as Action Officer on Medicare Legislation. Completing that tour of duty in July 1955, he assumed command of the destroyer USS Arnold J. Isbell, participating in two deployments to the Seventh Fleet. In this assignment he was commended by the Commander, Cruiser-Destroyer Forces, U. S. Pacific Fleet for winning the Battle Efficiency Competition for his ship and for winning Excellence Awards in Engineering, Gunnery, Antisubmarine Warfare, and Operations. In July 1957 he returned to the Bureau of Naval Personnel for further duty. In December 1957 he was transferred to the Office of the Assistant Secretary of the Navy (Personnel and Reserve Forces), and served as Special Assistant for Naval Personnel until November 1958, then as Special Assistant and Naval Aide until August 1959.

Ordered to the first ship built from the keel up as a guided missile ship, USS Dewey (DLG-14), building at the Bath (Maine) Iron Works, he assumed command of that guided missile frigate at her commissioning in December 1959, and commanded her until June 1961. During this period of his command, Dewey earned the Excellence Award in Engineering, Supply, Weapons, and was runner-up in the Battle Efficiency Competition. He was a student at the National War College, Washington, D. C., during the 1961-1962 class year. In June he was assigned to the Office of the Assistant Secretary of Defense (International Security Affairs), Washington, D. C., where he served first as Desk Officer for France, Spain and Portugal, then as Director of Arms Control and Contingency Planning for Cuba. From December 1963 until 21 June 1965 he served as Executive Assistant and Senior Aide to the Honorable Paul H. Nitze, Secretary of the Navy. For duty in his tour in the offices of the Secretary of Defense and the Secretary of the Navy, he was awarded the Legion of Merit.

After his selection for the rank of Rear Admiral, he assumed command in July 1965 of Cruiser-Destroyer Flotilla Seven. "For exceptionally meritorious service..." in that capacity, he was awarded a Gold Star in lieu of a Second Legion of Merit. In August 1966 he became Director of the Chief of Naval Operations Systems Analysis Group, Washington, D. C., and for "exceptionally meritorious service... as Director, Systems Analysis Division, Office of the Chief of Naval Operations, Deputy Scientific Officer to the Center for Naval Analyses, during the period from August 1966 to August 1968..." he was awarded the Distinguished Service Medal. The citation further states in part:

"Rear Admiral Zumwalt, by direction of the Chief of Naval Operations, established the Systems Analysis Division and rapidly developed it into a highly effective, responsive organization. Under his leadership, the division has assisted in generating within the Navy a better understanding of requirements, problems and a more effective presentation of those requirements in major program areas which will strongly influence the combat capabilities of U. S. Naval Forces through the next generation. (He) has displayed exceptional acumen, integrity, tact and diplomacy as personal representative of the Chief of Naval Operations, not only in dealings within the Department of Defense, but also in testifying before Congressional Committees. Among the major analyses completed under his direct supervision were the major Fleet Escort, Antisubmarine Warfare Force Level, Tactical Air, Surface-to-Surface Missile, and War-at-Sea Studies. Additionally, under Rear Admiral Zumwalt's guidance, the Center for Naval Analyses has been restructured, and its methodologies clearly defined with such precision as to ensure that completed studies will reflect thoroughness, comprehensiveness and accuracy when subjected to closest scrutiny..."

In September 1968 he became Commander Naval Forces, Vietnam and Chief of the Naval Advisory Group, U. S. Military Assistance Command, Vietnam. President Richard M. Nixon nominated him as Chief of Naval Operations on 14 April 1970. Upon being relieved as Commander Naval Forces, Vietnam, on 15 May 1970, he was awarded a Gold Star in lieu of a second Distinguished Service Medal for exceptionally meritorious service. He assumed command as Chief of Naval Operations on 1 July 1970 and retired from that position on 1 July 1974. In 1976, he unsuccessfully ran as a Democratic candidate for the Senate from Virginia. Later he held the presidency of the American Medical Building Corporation in Milwaukee, Wisconsin.

Admiral Zumwalt died on 2 January 2000 at the Duke University Medical Center in Durham, NC. His home was in Arlington, Virginia. He was married to the former Mouza Coutelais-du-Roche of Harbin, Manchuria, and they had two sons, Elmo R. Zumwalt III, who died of cancer in 1988, and James Gregory Zumwalt, and two daughters, Ann F. Zumwalt Coppola and Mouza C. Zumwalt-Weathers. He was also survived by six grandchildren.