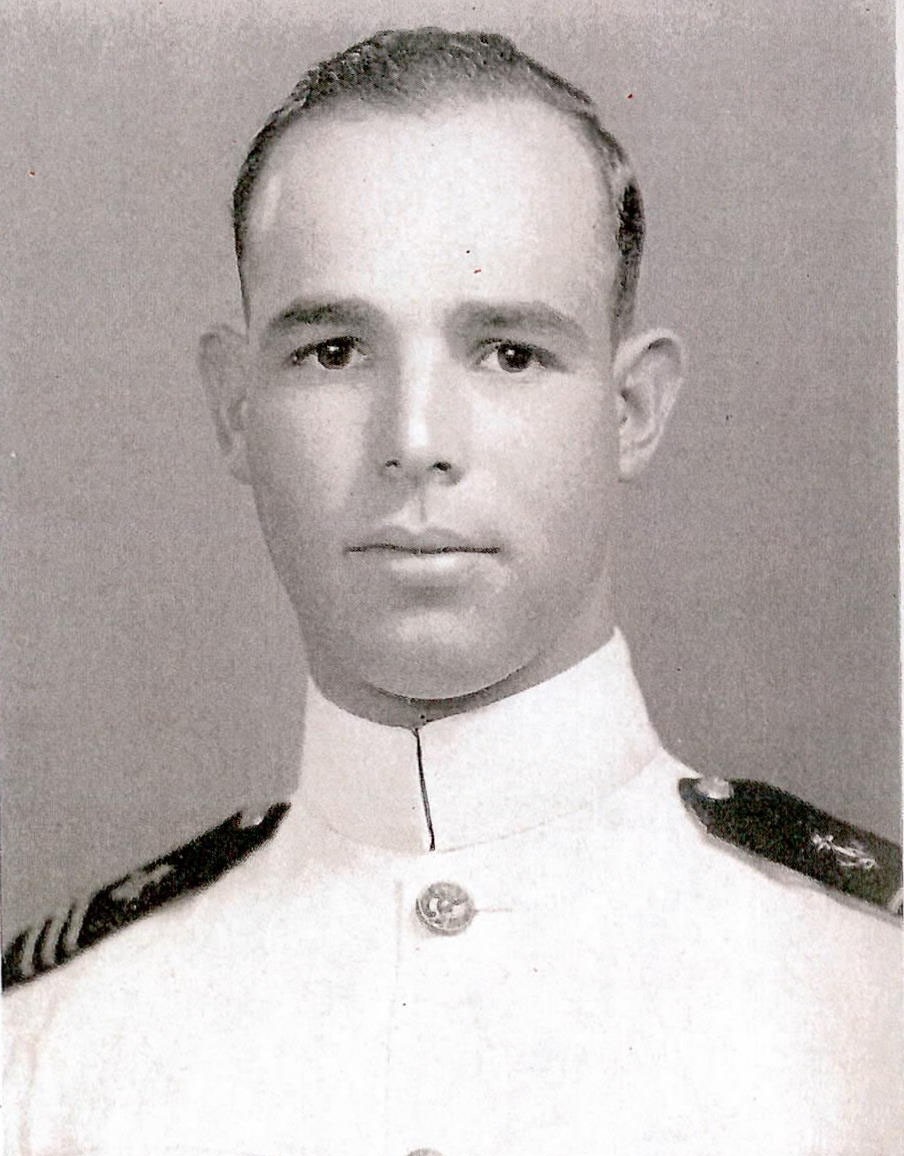 Rafael Celestino Benitez was born in Juncos, Puerto Rico, on March 22, 1917, son of Celestino and Marina Rovira Benitez, of San Juan, Puerto Rico. He attended George Washington High School and Army-Navy Preparatory School, both in New York City, before entering the US Naval Academy, Annapolis, Maryland, in 1934. As a Midshipman he was active in battalion sports; was Vice President of the Foreign Language Club; and was Sports Editor of “Reed Points.” Graduated with a Bachelor of Science degree in Electrical Engineering, and commissioned Ensign on June 1, 1939, he subsequently advanced to the rank of Captain to date from February 1, 1958.

After graduation from the Naval Academy in 1939 he was assigned to USS Yorktown. He had duty as junior officer in that carrier until December 1940 when he was ordered to the Submarine School, New London, Connecticut. Completing the course in April, he joined USS Grenadier, and in that submarine participated in five war patrols in the Pacific. He was awarded a Gold Star in lieu of the second Silver Star Medal for “conspicuous gallantry and intrepidity in action in the performance of his duties on the USS Grenadier during the Second War Patrol of that vessel in enemy controlled waters from 12 April to 10 June 1942…”

The citation states further: “As Engineer and Diving Officer, his outstanding ability, leadership, and supervision of engineering personnel, and his careful and precise control of depth was of invaluable assistance to his Commanding Officer in conducting successful attacks which resulted in the sinking of two enemy ships totaling 24,400 tons. His coolness and high devotion to duty contributed directly to the success of his vessel in evading enemy countermeasures…”

He was detached from the Grenadier in May 1945 to return to the Untied States, and ordered to USS Bashaw, served as Engineer Officer during one war patrol. He was then transferred to USS Dace in which he made three war patrols as Executive Officer, participating in the Second Battle of the Philippine Sea. The Dace (with the Darter) spotted the Japanese combined fleet moving north from Borneo, and sank one cruiser. After sinking one vessel and damaging another, the Darter ran aground that night, and her crew was removed by the Dace.

For “distinguishing himself by excellent service as Assistant Approach Officer of the USS Dace during her Fourth War Patrol in enemy controlled waters from June 13 to August 6, 1944…” he received a Letter of Commendation with Ribbon and Combat “V,” from the Commander Seventh Fleet. For later action, while still attached to that submarine, he was awarded the Silver Star Medal and the Bronze Star Medal with Combat “V.” The citations follow in part:

Silver Star Medal: “For conspicuous gallantry and intrepidity as Assistant Approach Officer of the USS Dace, during a War Patrol of that vessel in enemy Japanese-controlled waters, from September 1 to November 6, 1944. Expertly utilizing attack data and fire control equipment, Lieutenant Commander Benitez rendered invaluable assistance as his Commanding Officer in delivering attacks to destroy one major enemy warship and two large merchantmen….”

Bronze Star Medal: “For heroic service as Assistant Approach Officer in the USS Dace during the Sixth War Patrol of that vessel in action against enemy-Japanese forces in the South China Sea Area from December 2, 1944 to January 28, 1945…” He is also entitled to the Ribbon for, and a facsimile of, the Navy Unit Commendation awarded the USS Dace.

Upon his return to the United States in February 1945 he was ordered to command USS Halibut. After decommissioning that submarine in May of that same year, he assumed command of USS Trumpetfish. In March 1946 he was ordered detached and to duty in the Pan American Division of the Office of the Chief of Naval Operations, Navy Department. In that assignment he served as Junior Aide to the Brazilian Secretary of the Navy during his visit to the United States in May-June 1946.

On June 17, 1946 he reported to the Office of the Judge Advocate General, Navy Department, and during his tour of duty there completed a postgraduate course in Law at Georgetown University, Washington, DC, receiving his Bachelor of Laws degree on June 13, 1949. He was detached from the Judge Advocate General’s Office and assumed command, in July, of USS Cochino (SS 345). That snorkel submarine sank as the result of a battery explosion and fire on August 26, 1949, and Captain Benitez returned to the Navy Department for duty.

From September 1949 until May 1950 he served with Submarine Development Group 2, and in June 1950 he reported to the Office of the Chief of Naval Operations, for duty as Assistant Head, Plans, Policy and Training Branch. In January 1952 he was detached for duty as Chief, US Naval Mission to Cuba, Havana, Cuba, and also served as Sub-Chief, US Naval Section, Military Advisory Assistance Group, Cuba.

He served as Operations Officer of USS Iowa from March 1954 to August 1955, then reported to Commander Destroyers, Atlantic Fleet as a Prospective Commanding Officer. In November 1955 he took command of USS Waldron (DD-699) and remained in command of that destroyer until June 1957. Reporting to the Bureau of Naval Personnel, Navy Department, Washington, DC, he was assigned to the Office of the Secretary of Defense, for duty as Deputy to the Assistant to the Secretary for Legislative Affairs.

In addition to the Silver Star Medal with Gold Star in lieu of the second award, the Bronze Star medal with Combat “V,” the Commendation Ribbon with Combat “V,” and the Ribbon for the Navy Unit Commendation to the USS Dace, Commander Benitez has the American Defense Service Medal; the Asiatic-Pacific Campaign Medal with four engagement stars: the World War II Victory Medal; the National Defense Service Medal; and the Philippine Liberation Ribbon. He also has the Submarine Combat Pin, and two foreign decorations: The Order of Merit, awarded by the Cuban Government, and the Order of Merit from the Chilean Government.