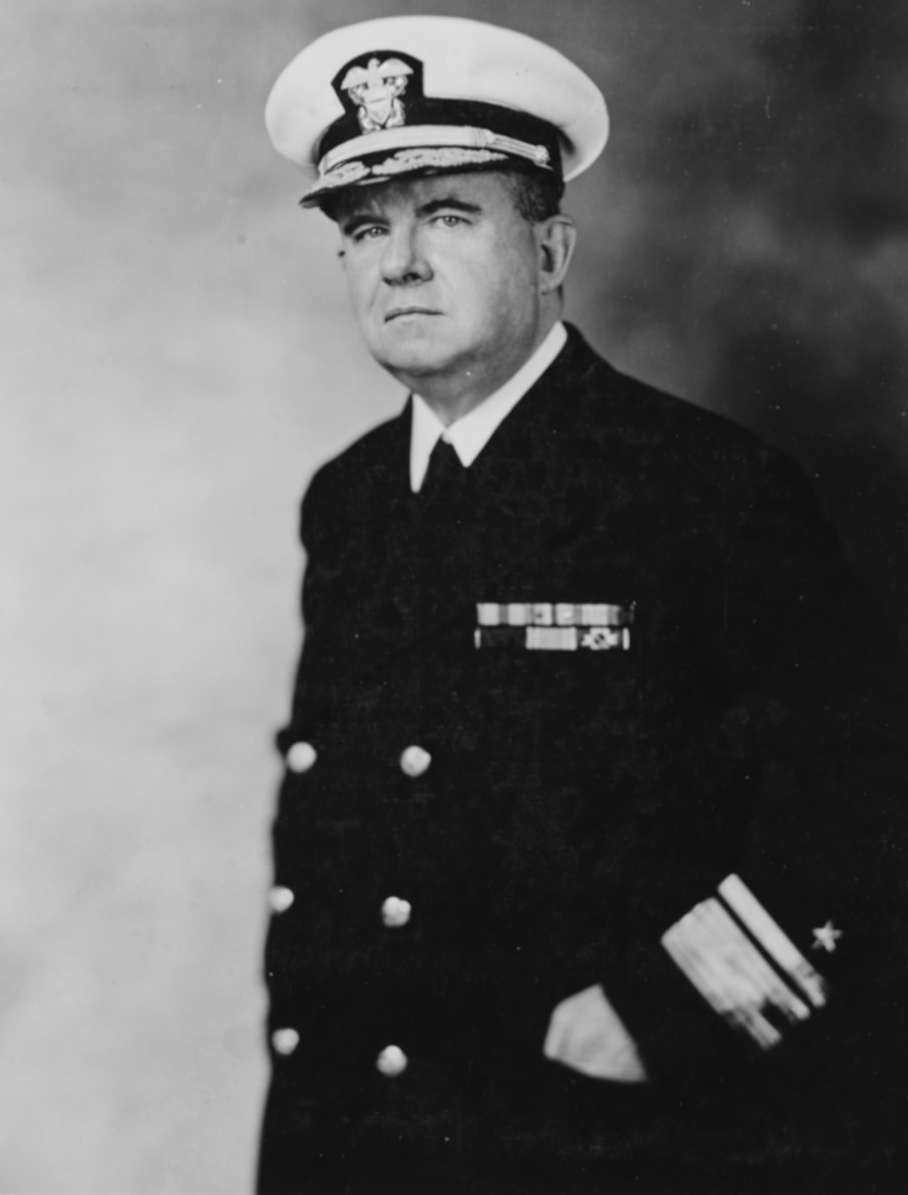 Augustin Toutant Beauregard was born in San Antonio, Texas, on 1 December 1885, son of Richard T. and Aglae Josephine (Phillips) Beauregard. He attended San Antonio High School prior to his appointment to the US Naval Academy, Annapolis, Maryland, from his native state in 1913. While attending the Academy, he was selected as one of the four Midshipmen to serve as Aides to the Grand Marshall during the inauguration of Theodore Roosevelt as President of the United States, and Charles V. Fairbanks, as Vice President in March 1905. Graduated 12 September 1907 with the class of 1907, he served the two years at sea, then required by law, before he was commissioned Ensign on 13 September 1908. He subsequently advanced in rank, attaining the rank of Rear Admiral to date from 1 April 1941 and on 1 November 1942 was transferred to the Retired List of the US Navy.

In 1918, he was assigned to the Bureau of Navigation, Navy Department, Washington, DC, and while in that assignment had temporary duty as Aide to the Minister of Foreign Affairs of Uruguay. Ordered in 1920 to the Navy Yard, New York, New York, he assisted in the fitting out of the USS Tennessee, and joined that battleship as Navigator upon her commissioning on 3 June 1920. He served in the Tennessee for two years, and between December 1922 and 1927 was a member of the United States Naval Mission to Brazil.

He joined the USS Texas in May 1927, and while attached to that battleship had temporary duty as Aide to President Elect Herbert Hoover on a cruise to South American and West Indian ports. When the party returned to the United States in December 1928, he resumed his duties in the Texas. Detached from that battleship in July 1929, he again served in the Department of Modern Languages at the Naval Academy, and while in that assignment, was Naval Aide to Dr. Julio Pastres, President Elect of Brazil, on his visit to the United States in 1930.

In June 1938, he reported as Operations Officer on the staff of Commander Battle Force, US Fleet, and the next year, transferred in a similar capacity, to the Staff of Commander in Chief, US Fleet. Later in 1933, he assumed command of USS Altair, and in June 1934 was ordered to the Office of the Chief of Naval Operations, Navy Department, for a brief duty prior to reporting in September of that year as US Naval Attache at the American Embassy, Paris, France, with additional duty as Naval Attache at the American Embassy, Madrid, Spain.

From June 1936 to July 1937 he had instruction at the Naval War College, Newport, Rhode Island, after which he commanded the USS New Orleans, operating with Cruiser Division SIX, Scouting Force. Detached from command of that cruiser in February 1939, he then reported as Chief of the US Naval Mission to Brazil. Returning to the United States in May 1941, he was designated Special Representative of the Chief of Naval Operations, to Naval Officials of the South American Republics in connection with their tour of the United States. Two months later, July 1941, he became US Naval Attache at the American Embassy, Rio de Janiero, Brazil. He was transferred to the Retired List of the US Navy on 1 November 1942, but continued to serve in the latter assignment until 13 August 1943, when he was relieved of all active duty.

'For exceptionally meritorious service...as chief of our Naval Mission to Brazil and Commandant of the Naval Operating Base, Rio de Janiero, from December 1, 1942 to May 8, 1943...' he was awarded the Legion of Merit. The citation continues: 'by his thorough understanding of the people and language of Brazil, his brilliant initiative and sound diplomatic ability, Rear Admiral Beauregard achieved a closer and more effective relationship between our two countries. Working with the Brazilian President and his Ministers as representative of the Commander South Atlantic Force, he rendered invaluable assistance in obtaining maximum cooperation for successful execution of our mutual war effort in that area.'

He died on 8 April 1951, in Jacksonville, Florida. He was survived by his wife, the former Elizabeth Mumford of Clarkesville, Tennessee, and a daughter. Rear Admiral Beauregard made his home in Coronado, California for many years prior to his death.

In additon to the Legion of Merit, Rear Admiral Beauregard had the Mexican Campaign Medal; the Victory Medal, Pacific Fleet Clasp (World War I); the American Defense Service Medal; the American Campaign Medal; and the World War Two Victory Medal. He also had the following foreign decorations: Legion of Merit, with rank of Officer, from France, and the Order of Abdon Calderon, First Class, from the Equadorian Government. He had also been awarded from Brazil, the Medal commemorating the Fiftieth Anniversary of the Founding of the Republic of Brazil; the Order of Naval Merit with rank of Commendador and the Order of the Southern Cross.