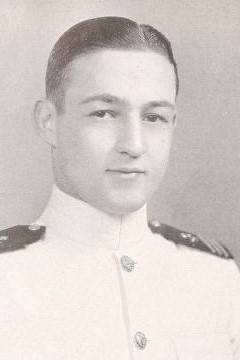 Eugene George Fairfax was born on November 6, 1916, in Vernal, Utah, son of Harry Eugene and Emily (Hollingshead) Fairfax. He attended West High School, Salt Lake City, Utah and in March 1934 enlisted in the U.S. Navy. After boot training at the Naval Training Station , San Diego, California, he reported in May 1934 on board the USS Nevada and was serving in that battleship when was honorably discharged in July 1935 to accept an appointment to the U.S. Naval Academy, Annapolis, Maryland. Graduated and commissioned Ensign on June 1, 1939, he subsequently advanced in rank to that of Rear Admiral, to date from August 1, 1966.

Following graduation from the Naval Academy in 1939, he joined the USS Mississippi, which in the summer of 1941 made one patrol and one convoy to Iceland. Detached from that battleship in August 1941, he next had flight training at the Naval Air Station, Pensacola, Florida, and on March 19, 1942 was designated Naval Aviator. He remained at the Pensacola Air Station until September that year, then reported as Senior Aviator on board the USS Tennessee. While attached to that battleship, he participated in operations in the Aleutians area in the summer of 1943. He became Executive Officer of Fighting Squadron ELEVEN in September 1943 and in August 1944 assumed command of that squadron, which from October 1, 1944 until February 1, 1945 was based on board the USS Hornet. For outstanding service with Fighting Squadron ELEVEN, he was awarded the following;

Distinguished Flying Cross: “For heroism and extraordinary achievement... during operations against enemy Japanese forces in the vicinity of Formosa, on October 12, 1944… (at which time he) personally scored a hit with his rockets on a large enemy aircraft assembly and repair building to leave it burning furiously (and) … contributed to the success of his flight in shooting down two hostile planes, in damaging or destroying numerous grounded aircraft an in inflicting extensive damage on the airfield..”

Gold Star in lieu of the Second Distinguished Flying Cross: “…In operations against enemy Fleet units during that Battle for Leyte Gulf, October 26, 1944…(He) aided in seriously damaging a cruiser and personally shot down an enemy plane (and) later… led another strike against five destroyers, extensively damaging one and seriously damaging another …”

Gold Star in lieu of the Third Distinguished Flying Cross: “When a numerically superior group of hostile fighter planes intercepted the coordinated strike group he was leading in an attack on the Clark Field Area (on November 5, 1944), (he) personally shot down two enemy aircraft in the faces of heavy and accurate antiaircraft fire and contributed materially to the successful completion of the strike and the safe return of the escorted bombing and torpedo planes…”

Air Medal: Enroute to strafe Japanese airfields in the vicinity of Hong Kong, China, January 15, 1945, an enemy transport plane, escorted by four fighter planes, was sighted. Ordering an attack, he personally shot down one plane and assisted in the destruction of the others.

He command Fighting Squadron NINETY-EIGHT from March 1945 until May 1946 and as such was engaged during the final months of World War II in training replacement fighter pilots for carriers in the Pacific. He again had command of the Fighting Squadron EIGHT, based on the Naval Air Station, Kahului, Maui, Territory of Hawaii, and in October 1946 was detached for duty as Aviation Analyst in the Material Division, Executive Office of the Secretary of the Navy, Navy Department, Washington, D.C. He continued duty in that capacity until July 1948, interspersed with instruction from June 1947 to May 1948 at the Naval War College, Newport, Rhode Island.

From July 1948 to May 1949 he attended the guided missile course at Fort Bliss, Texas, after which he served as Training Officer with Fleet Airborne Electronics Training Unit, Atlantic. In November 1949 he reported as Navigator on board the USS Mindoro and in May 1951 was detached to return to the Naval War College, where he served on the Staff (Command and Staff Department) until July 1953. Following an assignment, which extended to May 1955, as Executive Officer of Composite Squadron THREE, he was ordered to the Newport News (Virginia) Shipbuilding and Dry Dock Company, to assist in the fitting out of the USS Forrestal (CVA-59). He joined that attacked aircraft carrier as Navigator upon her commissioning, October 1, 1955.

He headed the Air Programs Branch, Office of the Chief of Naval Operations, Navy Department, during the period March 1957 to July 1960, after which he commanded the USS Passumpsic (AO-107). In July 1961 he assumed command of the USS Ticonderoga (CVA-14) and in July 1962 reported as Chief of Staff and Aide to Commander Carrier Division ONE. In September 1963 he was assigned to the Weapons Systems Evaluations Group, Office of the Secretary of Defense, Washington, D.C. he was awarded the Joint Service Commendation Medal for making  “…. Particularly important contributions involving the effectiveness of our nation’s ballistic missile systems…” in that capacity.

In October 1965 he transferred to Office of the Assistant Chief Naval Operations (General Planning and Programming), Navy Department. In January 1966 he became Deputy Commander (Navy), Joint Task Force TWO and “for exceptionally meritorious service from January 1966 to May 1968…” in that capacity was awarded the Legion of Merit.

In June 1968 he became Commander Antisubmarine Warfare Group FIVE. “For exceptionally meritorious service from October 1968 through April 1969 while serving with the United States SEVENTH Fleet as Commander Antisubmarine Warfare Group FIVE and Commander Task Group 70., in connection with operations against enemy aggressor forces in the Republic of Vietnam…” he was awarded a Gold Star in lieu of the Second Legion of Merit.

In July 1969 he reported as Commander Alaskan Sea Frontier, with additional duty as Commandant of the Seventeenth Naval District and Commander Fleet Air, Alaska, with headquarters in Kodiak. He became Deputy Naval Inspector General, Office of the Chief of Naval Operations, Navy Department in August 1971 and served as such relived of active duty pending his retirement, effective February 1, 1972.