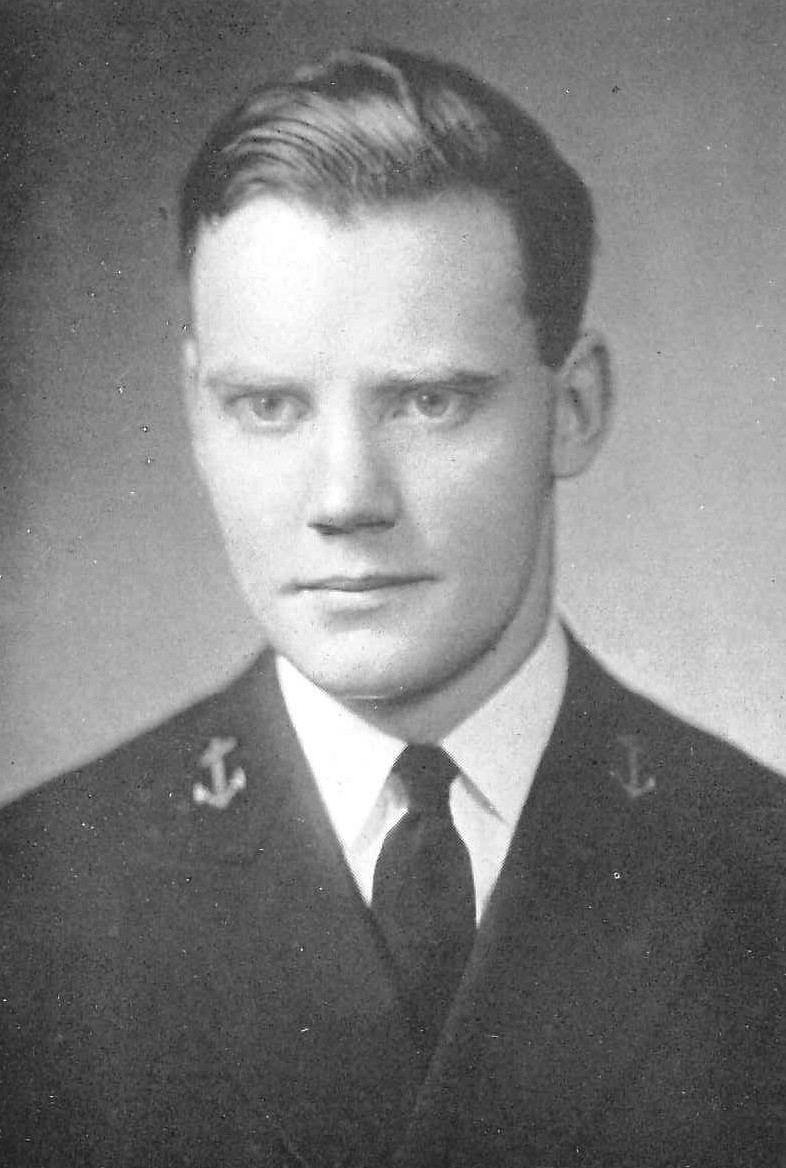 Robert Van Rensselaer, Jr., was born in Owego, New York, on January 14, 1913, son of Robert V.R. and Harriet Hibbard Bassett.  He attended public schools in Owego, and prepared for the US Naval Academy at Severn Preparatory School, Severna Park, Maryland, before entering that institution as a Midshipman from New York on July 7, 1931.  He was graduated and commissioned Ensign on June 6, 1935, and subsequently advanced to the rank of Captain, to date from July 1, 1954.

After graduation from the Naval Academy in June 1935, he was assigned to the USS Texas, flagship of Battleship Division ONE, of the Battle Force.  He served as a junior officer in Engineering and Gunnery and as Assistant Navigator of that battleship until December 1937.  In January 1938 he reported to the USS Savannah, a cruiser operating under the Chief of Naval Operations, in which he served until March 1940 as Assistant Gunnery Officer and First Lieutenant.  As Engineer Officer of the USS Pope (DD-225), he participated in the Philippine Operations (including Guam and other Asiatic Fleet operations) from December 8, 1941 to March 1, 1942; the Netherlands East Indies Operation, including engagements at Makassar Strait and Badoeng Strait, January 23-24 and February 19-20, respectively.

He is entitled to the Ribbon for, and a facsimile of, the Presidential Unit Citation awarded the USS Pope, “For extraordinary heroism in action against enemy Japanese forces in the Java Campaign in the Southwest Pacific War Area, from January 23 and February 19-20, respectively.

He is entitled to the Ribbon for, and a facsimile of, the Presidential Unit Citation awarded the USS Pope, “For extraordinary heroism in action against enemy Japanese forces in the Java Campaign in the Southwest Pacific War Area, from January 23, to March 1942…”  The citation further states:

“…Gallantly operating with the meager surface forces of the combined United States, British and Dutch Royal Navies tested in combat by predominantly superior Japanese Fleets, the USS Pope audaciously joined three destroyers in a fierce counter invasion off Balikpapan, confusing and disorganizing her enemy to aid in the sinking or damaging of a part of the hostile concentration by accurate torpedo and gunfire.  Illuminated, and a highly vulnerable target for hostile cruiser and destroyer gunfire…in the Badoeng Strait action, she responded nobly to the efforts of her officers and men and scored several damaging torpedo and gun hits before effecting a masterly withdrawal from the perilous area.  Subsequently escorting HMS EXETER and HMS ENCOUNTER in the Java Sea, and engaging four Japanese cruisers and four destroyers, the POPE fought with all the armament at her command to inflict damage on the Japanese forces and, when friendly warships were put out of action skillfully broke off the one-sided engagement.  Relentlessly trailed by cruiser-borne planes and repeatedly bombed aircraft, she battled with unconquerable spirit and undiminished fury before succumbing to the lethal blows…”

He was awarded the Legion of Merit with Combat “V” and citation: “For meritorious conduct…while serving as Engineer Officer and Officer-of-the-Deck of the USS Pope in the battles of Makassar Strait, Badoeng Strait and Java Sea, from January to March 1942.  During each of three engagements, Lieutenant Commander Bassett contributed notably to the preservation and battle success of the USS Pope, avoiding collisions in the darkness which undoubtedly would have resulted in disaster for his own vessel and another United States destroyer.  Largely as a result of his intelligent and inspiring leadership, the Engineering Department of the USS Pope continued to operate in a highly efficient manner, despite the fact that it had not had a major overhaul for over two years…”

The Pope was crippled by enemy aircraft and on March 2, 1942, was sunk by six salvos from the Japanese cruisers which finally spotted her.  Her survivors, including Captain Bassett, were picked up by a Japanese destroyer which discovered the group after three days in the water.  They were taken to Japan where they remained Prisoners of War until after the end of hostilities in August 1945.

Captain Bassett spent the next eight months enroute to the United States, in hospitals, on leave, and completing refresher courses in Gunnery, Combat Information, Damage Control, and others.  In June 1946 he reported as Gunnery Officer and Material Officer on the Staff of Commander Philadelphia Group, Atlantic Reserve Fleet.  In September 1948 he assumed command of the USS Rehoboth (AGS 50), and remained in that command until June 1950.  During this period Rehoboth and San Pablo (AGS 30), the first naval vessels to be equipped miles on oceanographic surveys into the mysteries of the great Atlantic Ocean.  These studies ranged from contouring the ocean bottom, studying the chemical make-up of the water, gathering of bottom samples at depths of three miles, to tracing the meanderings of the Gulf Stream.

From July 1950 until June 1951 he was a student (Strategy and Tactics course) at the Naval War College, Newport, Rhode Island.  Reporting next to the Navy Department, Washington, DC, he served from July of that year until December 1952 in the Logistics Plans Division, Office of the Deputy Chief of Naval Operations (Logistics).  During the period January 1953 to August 1954 he was Executive Officer of the USS Baltimore, and was present when the Baltimore flew the flag of Admiral Jerauld Wright, CINCHELM, at the Coronation Naval Review at Spithead, in June 1953, held in honor of Her Majesty, Queen Elizabeth II.

He next served as Assistant Force Operations Officer of the staff of Commander Service Force, Pacific, and in April 1956 was ordered to duty as Professor of Naval Science, Naval Reserve Officers Training Corps Unit, Duke University, Durham, North Carolina.  Under orders of June 18, 1959, he became Executive Officer and Naval Advisor, Logistics Division, Staff, Supreme Allied Commander Europe, and a year later returned to the Navy Department to serve successively on the Navy Discharge Review Board, the Naval Examining Board and the Navy Council of Personnel Board.  On April 17, 1962, he was ordered to duty as Commanding Officer, Naval Reserve Officer Training, Corps Unit, University of New Mexico, Albuquerque, New Mexico.

In addition to the Legion of Merit with Combat “V” and the Presidential Unit Citation Ribbon, Captain Bassett has the Army Unit Badge (defense of the Philippines in December 1941) and the Dutch Bronze Cross, awarded by the Government of The Netherlands.  He also has the American Defense Service Medal, Fleet Clasp; the Asiatic-Pacific Campaign Medal; World War II Victory Medal; National Defense Service Medal; and the Philippine Defense Ribbon.