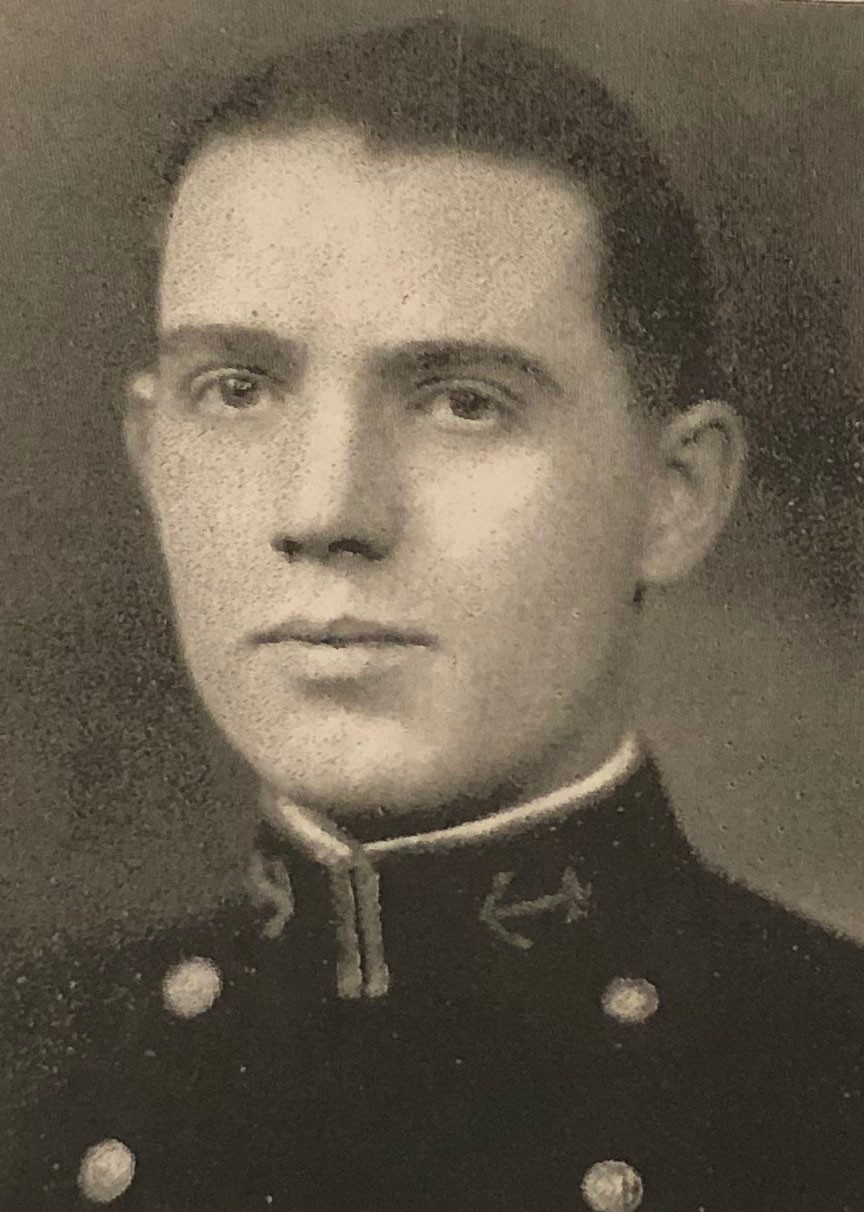 Paul Edgar Emrick was born in Butler, Pennsylvania, on April 1, 1910, son of Edgar. and Emma L. (Keck) Emrick. He attended Butler High School before his appointment to the U.S Naval Academy, Annapolis, Maryland, from the Twenty-sixth Congressional District of his native state in 1928. Graduated and commissioned Ensign on June 2, 1932, he subsequently advanced, attaining the rank of Captain, to date from January 1, 1951.

After graduation from the Naval Academy in 1932, he joined USS Concord, he was aboard that cruiser at Long Beach, California, during the earthquake there in 1933, and the following the quake went ashore as a member of the Naval Shore Patrol. Detached from the Concord in October 1934, he was ordered to the Naval Air Station, Pensacola, Florida, for flight training. Designated a Naval Aviator on January 6,1936, he then reported for duty with Cruiser Scouting Squadron Four, based on USS Houston. In June 1938 he transferred to Torpedo Squadron Two, based on USS Houston, and continued to serve with that squadron until 1939.

He was an Instructor in Squadron VN5D8 at the Naval Station, Pensacola, Florida, until September 1940, followed by similar duty in Squadron VN1D7 at the Naval Air Station, Miami, Florida. He remained in Miami until August 1941 and the next month was ordered to the Naval Air Station, Norfolk, Virginia, where Torpedo Squadron eight was fitting out. The Squadron was commissioned on October 21, 1941 and assigned to USS Hornet, he served with Torpedo Squadron EIGHT until February 8, 1942, when he was assigned pre- commissioning duty with Torpedo Squadron NINE. He assumed command of that squadron on November 1, 1942 and continued to command that until December 1943. He was awarded the Distinguished Flying Cross, the air Medal, a Gold Star in lieu of the Second Distinguished Flying Cross, a Gold Star in lieu of the Second Air medal, for outstanding services as Commander Torpedo Squadron nine and Commander Air Group nine, based in the USS Essex. The citations follow in part:

Distinguished Flying Cross: “For heroism and extraordinary achievement…… in offensive action against enemy Japanese forces on Marcus Island, August 31, 1943. In the face of terrific anti-aircraft fire, (he) repeatedly led his squadron in persistent, vigorous strikes against hostile positions on the Island and pressing home his own individual attacks with aggressive determination and superb airmanship contributed materially to the severe, extensive damage inflicted on important enemy shore installations and grounded aircraft…….”

Air Medal: “For meritorious achievement…. In offensive action against enemy Japanese forces at Wake Island on October 5 and 6, 1943. Fearlessly leading his squadron in an initial attack against a heavily fortified airfield on October 5 (he) successfully located his target despite extremely adverse weather and total darkness and skillfully maneuvering for maximum striking power, pressed home a determined glide-bombing attack on revetment area in the face of withering anti-aircraft fire. The following day, he again conducted an effective raid on the Island and, through his brilliant leadership and outstanding courage in the face of fierce opposition, severely damaged numerous other Japanese land-based installations…”

Gold Star in lieu of the Second Distinguished Flying Cross: “For heroism and extraordinary achievement…… as Commander of Air Group nine, attached to the USS Essex…. in the vicinity of Rabaul, New Britain, and the Solomon Islands on November 11.1943. Undaunted by unfavorable weather conditions, heavy fighter opposition and intense anti-aircraft fire from shore installations and combatant ships Commander Emrick planned and led an attack against enemy shipping at Rabaul to sink to sink a destroyer, damage one light or heavy cruiser, damage three light cruisers, damage one light or heavy cruiser and destroy sixteen enemy planes in the air, personally obtaining valuable pictures of the action. When the Task Group of which he was a part was attacked by over a hundred enemy planes while his Air Group was launching a second strike against Rabaul later in the day, (he) repeatedly divide through the antiaircraft fire of focus to enable his combat crew to destroy two of the forty six planes destroyed by the Air Group…..”

Gold Star in lieu of the Second Air Medal: “For meritorious achievement…. (while) operating against an enemy Japanese base at Tarawa, Gilbert Islands, from November 19 to 25, 1943. Participating in the assault and occupation of these islands, Commander Emrick boldly led his group through intense and withering enemy anti-aircraft fire to carry out repeated swift and aggressive strikes against an important hostile base in this area, inflicting extensive damage on Japanese aircraft and base installation. An outstanding leader and expert airman, Commander Emrick, by his cool courage and gallant fighting spirit under fire contributed to the success of these hazardous missions.

Continuing duty in the Essex, he became Air Officer of that aircraft carrier in January 1944, and in April of the same year was assigned duty as her Navigator, He is entitled to the Ribbon for, and a facsimile of the Presidential Unit Citation awarded the USS Essex for extraordinary heroism in action against enemy Japanese forces in the air, ashore and afloat in the Pacific War Area from August 31, 1943 to August 15, 1945……” The citation is concluded with: “.......Daring and dependable in combat, the Essex and her gallant officers and men rendered loyal service in achieving the ultimate defeat of the Japanese Empire.

Detached from the Essex on July 1, 1945, he reported the next month, as Executive Officer of the Naval Air Station, Jacksonville, Florida. He remained there until January 1948, and in June of the same year completed the course at the Armed Forces Staff College, Norfolk, Virginia, He then commanded Composite Squadron Eleven until July 1950, followed by duty as Chief of Staff to the Commander Naval Air Technical Training, Naval Air Station, Memphis, Tennessee. He severed in that capacity until August 1952, when he was ordered as Chief Staff Officer to the Commander Fleet Air, his present.