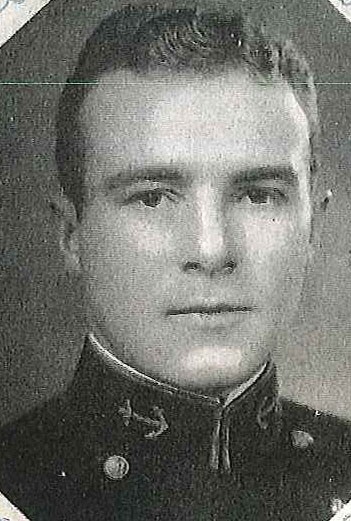 Richard Stottko Andrews was born in Silver City, New Mexico, on July 7, 1907, son of Frank Ellery and Goldia Stottko Andrews.  He attended Los Alamos, New Mexico, Ranch School in the summer of 1923, and was graduated from Santa Fe High School in 1924.  Enlisting in the US Navy on October 6, 1924, he served for three years, including a year in the US Naval Academy Preparatory Class at the Naval Training Station, San Diego, California.  He completed the course and was honorably discharged to enter the Naval Academy on June 30, 1927.

As Midshipman he participated in football and track, was a member of the 1931 Intercollegiate Championship Boxing Team and the 1930 Intercollegiate Campion Rifle Team.  He was also Assistant Advertising Manager on the Lucky Bag Staff during his first Class year.  Graduated and commissioned Ensign on June 4, 1931, he subsequently progressed in rank to that of Captain, his date of rank January 1, 1951.

Upon graduation from the Naval Academy in 1931, he was assigned duty there with the Navy Rifle Team during June of that year.  He then had preliminary flight instruction at the Naval Air Station, San Diego, California, and later reported on board USS Colorado for duty.  He was in the Anti-Aircraft Division of that battleship when her gun explosion occurred in 1931, and was commended with others for action at that time.  From the Colorado, then a unit of Battleship Division 4, Battle Force, he witnessed the California earthquake in 1933.

Ordered in June 1933 to the Submarine Base, New London, Connecticut, he completed instruction there, and next served consecutively in the USS S-27 and USS S-24, operating with the Submarine Force at Pearl Harbor, TH.  In the summer of 1936 he returned to the United States, Lakehurst, New Jersey.  He was attached there as a member of the ground crew at the time of the Hindenburg disaster, and was commended by the Commanding Officer of the Naval Air Station for action during that emergency.

In June 1938, he joined USS Quincy (CA 71) of Cruiser Division 7, Scouting Force, Atlantic Fleet, and was serving aboard that cruiser when the United States entered World War II on December 8, 1941.  In February 1942, he returned to the Naval Air Station, Lakehurst, for duty as Officer in Charge of Airship Training and in July 1943 became Commanding Officer of Airship Squadron 15.  He was awarded a Letter of Commendation with Ribbon by the Secretary of the Navy for “meritorious service as Commanding Officer of Blimp Squadron 15 from July 27, 1943 to February 16, 1944, when that squadron was engaged in warfare against enemy submarines in coastal waters…”

During the remaining months of the war he served in submarine in the Pacific Combat Area, with successive duty as Commanding Officer of USS Skipjack, Redfish, and Plaice.  He was awarded the Bronze Star Medal with Combat “V” for “meritorious achievement as Commanding Officer of USS Skipjack, during the Tenth War Patrol of that vessel in enemy-controlled waters in the Kurile Islands Area, from October 20 to December 11, 1944…” in which the Skipjack damaged an enemy vessel of 3,000 and sank a 300-ton lugger.

After two months as Executive Officer of that battleship, he commanded USS West Virginia from January to June 1946.  In July he reported as a student at the Naval War College, Newport, Rhode Island, and completing the course in June 1947, was designated Senior Submarine Advisor at the Argentine Naval War College at Buenos Aires, where he remained for two years.

In October 1949 he returned to the Naval Academy for duty as Executive Officer of the Department of Ordnance and Gunnery.  In August 1951 he assumed command of USS Mellette (APA 156), and in August 1952 was detached to the Twelfth Naval District, San Francisco, California, where he served as District Intelligence Officer.  In April 1955 he was ordered to duty as US Naval Attache and US Naval Attache for Aide, Rio de Janeiro, Brazil.