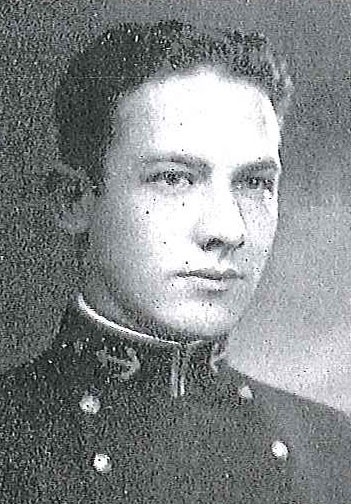 Born in Durango, Colorado, of Dutch parents, Captain deVos attended high school in Miami, Arizona, had a year at the University of Arizona, and was appointed to the Naval Academy in 1926. He was graduated with the degree of Bachelor of Science in 1930, and subsequently studied modern languages (French and Spanish) at Oxford, England, as a Rhodes Scholar, receiving the degrees of Bachelor of Arts and Master of Arts from Rowed University College. He later attended the Industrial College of the Armed Forces, Washington, DC, and completed the Naval War College course in International Law.

His early naval service included sea duty in cruisers, battleships, and destroyers. At the outbreak of World War II he was serving as Gunnery Officer on the Staff of Commander Destroyer Squadron 13, and for a year was assigned to Task Group 24.6 and 24.7, the first trans-Atlantic convoys to England. He received a Letter of Commendation from the Commander in Chief, Atlantic Fleet, “For exceptionally distinguished service from September 1941 to January 1943…(during which period he) contributed materially to the success of the Battle of the Atlantic…”

Service on the Staff of Commander in Chief US Fleet, proceded his duty as Commanding Officer of USS Murray, operating with Task Force 38 and 58 in the Pacific during the last year of the war. Under his command, that destroyer intercepted the Japanese vessel Tasaga Maru off Wake Island and later accepted the surrender of the first Japanese submarine at the cessation of hostilities. Captain deVos was awarded the Silver Star Medal and the Bronze Star Medal, with Combat “V,” for conspicuous gallantry and heroic service as Commanding Officer of the Murray from March 17 to August 15, 1945.

He briefly commanded Destroyer Division 96, which covered the landings of American troops in China and Korea, and after two years’ service on the Staff of Commander Western Sea Frontier, was named Chief of the US Naval Mission to Ecuador. He Remained in Quito until June 1950, then served for two years with the Joint Staff, Joint Chiefs of Staff, Washington, DC.

He had a year in command of the destroyer tender Sierra in the Atlantic, then completed a tour of duty as Special Assistant (for Shipbuilding Programs and Material Requirements) to the Deputy Chief of Naval Operations (Operations and Readiness). In April 1956 he assumed command of Destroyer Squadron 16, and in June 1957 was detached with orders to command the Naval Reserve Officer Training Corps Unit at the University of New Mexico, at Albuquerque.

Silver Star Medal; “For conspicuous gallantry and intrepidity as Commanding Officer of the USS Murray, in action against Japanese forces near the coast of Japan and later in the vicinity of Okinawa Shima, from March 17 to 27, 1948…Commanding an important unit of an advanced picket group, Captain (then Commander) deVos engaged in the destruction of seven enemy planes. Subsequently serving as a until of the screen of Carrier Task Group FIFTY-EIGHT POINT ONE, he directed to Murray during several missions and shot down on attacking torpedo plane although two of his guns were out of commission…”

Bronze Star Medal, with Combat “V, “: “For heroic service as Commanding Officer of the USS Murray, attached to Destroyer Squadron TWENTY-FIVE, in action against enemy Japanese forces in the vicinity of the Japanese Home Islands, from July 1 to August 15, 1945……..

“Participating in numerous carrier strikes against Honshu and Hokkaido, Japan, and in high-speed, anti-shipping sweeps along the shores of Honshu, (he) contributed materially to the success of our forces…(and) directed his vessel in a daring penetration thirty miles into enemy-held Suruga Wan, Honshu, to attack hostile shipping, railway and manufacturing objectives on the night of July 30…”

Letter of Commendation from the Commander in Chief, Atlantic Fleet: “For exceptionally distinguished and invaluable service as Operations Officer and Senior Officer on the Staff of Commander Destroyer Squadrons 27 and 13, and of Commander Task Group 24.7 from September 1941 to January 1943…In the training of the United States and Canadian Escort Groups, he contributed materially to the success of the Battle of the Atlantic.”