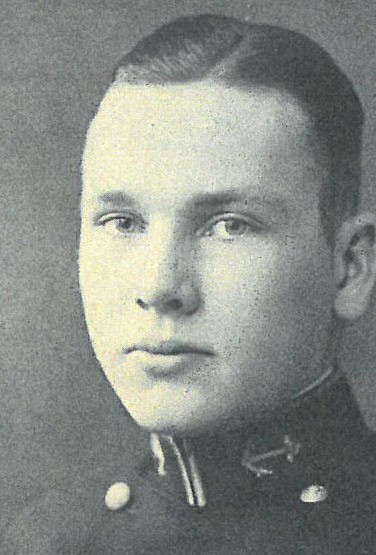 William Lovett Anderson was born in Sylvania Georgia, on 10 April 1905, son of Albert S. and Etta (Lovett) Anderson. He attended Millen (Georgia) High School, and the Columbian Preparatory School, Washington, DC, before his appointment to the US Naval Academy, Annapolis, Maryland, from his native state in 1922. As a Midshipman he won his Block "N" as Manager of the Fencing Team, 1925-26. Graduated and commissioned Ensign on 3 June 1926, he progressed in rank, to that of Captain, to date from 1 August 1943.

Following graduation from the Naval Academy in 1926, he reported on board USS Maryland, and in November 1927 transferred to USS Aroostook. Detached from that minelayer in April 1928, he was ordered to the Submarine School, Submarine Base, New London, Connecticut, for submarine training. Qualified in submarines in January 1929, he was assigned to Submarine Division TWENTY, and between April 1929 and June 1932 served in USS S-24. He had instruction in marine engineering at the Postgraduate School, Annapolis, Maryland, from July 1932 to May 1934, continuing the course at the University of California at Berkeley, from which he received the degree of Master of Science. In May 1935 he joined USS S-1, and a year later, May 1936, assumed command of USS S-22. Detached from command of that submarine in May 1938, he next served as an Instructor at the Submarine School, New London, Connecticut, and as Officer in Charge of the Diesel Laboratory.

In June 1940 he reported for fitting out duty in USS Thresher at the Electric Boat Company, Groton, Connecticut, and assumed command of that submarine upon her commissioning, 27 April 1940, The Thresher was off Pearl Harbor, Territory of Hawaii when the Japanese attacked the Naval Base there on 7 December 1941. He subsequently commanded that vessel during her first two war patrols. For outstanding service as Commanding Officer of the USS Thresher, he was awarded the Navy Cross and a Letter of Commendation with authorization to wear the Commendation Ribbon and Combat "V," from the Commander in Chief, US Pacific Fleet. The citations follow in part:

Navy Cross: "For distinguished service...during the period 30 December 1941 to 26 February 1942, while engaged on hazardous submarine patrol in enemy waters, he not only engaged in aggressive and successful act on by sinking enemy merchant shipping, but he also during that period reconnoitered enemy shores providing our raiding forces with valuable information, without injury or damage to material or personnel of his command..."

Letter of Commendation: "For distinguishing himself...as Commanding Officer of a United States submarine during a war patrol of that vessel. With aggressive determination, he launched a well-planned and smartly executed attack which resulted in sinking more than 5,000 tons of enemy shipping..."

Detached from the Thresher in June 1942, he had temporary duty in the Twelfth Naval District, San Francisco, California, prior to reporting in September of that year as Submarine Type Superintendent at the Navy Yard, Mare Island, California. "For exceptionally meritorious service..." in the latter capacity, he received a Letter of Commendation with authorization to wear the Bronze Star on his Commendation Ribbon, from the Secretary of Navy. He remained at the Mare Island Navy Yard until January 1944, when he joined USS Denver as Executive Officer.

He was awarded the Bronze Star Medal with Combat "V,” for "meritorious achievement as Executive Officer and Evaluator of the Combat Information Center of the USS Denver in action against enemy Japanese forces during the invasion of Leyte and the Battle for Leyte Gulf from 17 to 29 October 1944..." The citation further states: "With his ship participating in support operations during the amphibious invasion, (he) provided accurate information for the gun batteries during shore bombardment and subsequently during the Naval engagement with major units of the Japanese Fleet in which eight enemy warships were sunk by the Task Force of which the Denver was a Unit..."

In December 1944 he became Chief of Staff to the Commander Cruiser Division TWELVE. "For heroic service... (in that capacity) during operations against enemy Japanese forces in the Pacific War Area from 28 December 1944 to 7 August 1945..." he was awarded a Gold Star in lieu of the Second Bronze Star Medal with Combat "V." The citation continues in part:

"Captain Anderson contributed materially to the success of operations, in which his division rendered fire and covering support for seven assault landings in the Philippines, two in Borneo, and directed his ships in three offensive sweeps deep into enemy waters of the East China Sea and along the China Coast..."

Between August 1946 and October 1948 he was Chief of Staff to the Commander Naval Base, Philadelphia, Pennsylvania, after which he served as Navy Member of the Joint Advisory Plan Staff, Naval Advisory Group Survey Board, China. In February 1949 he joined the staff of Commander SEVENTH Fleet, and in September 1950 reported as Commander Destroyer Squadron THIRTEEN, Detached from command of that destroyer division in October 1951, he next had duty as Professor of Naval Science, Naval Reserve Officers Training Unit, University of South Carolina at Columbia. In May 1955 he became Chief of Staff and Aide to the Commandant of the Sixth Naval District, with headquarters in Charleston, South Carolina.