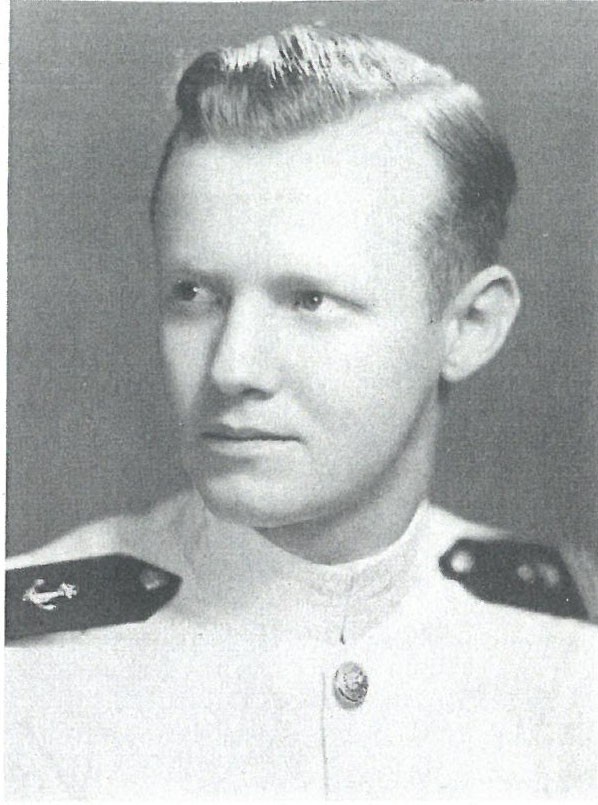 William Francis Cafferata was born in Chicago, Illinois, on November 23, 1920, son of William B. and Gertrude (Smith) Cafferata. He attended Fenwick High School, Oak Park, Illinois and Randle’s Preparatory School, Washington, DC, prior to his appointment to the US Naval Academy, Annapolis, Maryland, from his native state in 1939. Graduated and commissioned Ensign on June 19, 1942, with the Class of 1943 (accelerated course due to the war), he subsequently advanced in rank, attaining that of Captain, to date from July 1, 1962.

Following graduation from the Naval Academy in 1942, he joined USS Worden and in February 1943 was detached for duty in USS Braine. He continued service in that destroyer, throughout the remaining period of World War II, until June 1946, participating in action in the Bougainville, Marianas, Leyte, Luzon and Okinawa areas. “For meritorious service as Gunnery Officer on board USS Braine during operations against enemy Japanese forces in the vicinity of Okinawa on May 27, 1945…” he was awarded the Bronze Star Medal with Combat “V.” The citation further states part:

“When his ship was hit by two bomb-laden suicide planes causing serious damage to the main battery director, Lieutenant Cafferata dispatched a messenger ordering all mounts to shift control, organized a fire-fighting party, directed the dispersal of injured and unnecessary personnel from amidships and contributed materially to the extinguishment of the fire and to the saving of his ship…”

He next served as Executive Officer of USS Putnam and in November 1948 reported as Tactical Instructor at the Fleet Sonar School, Key West, Florida. In August 1951 he joined USS Missouri as Navigator and between April and August 1952 had duty ashore as an Instructor at the Fleet Training Center, Charleston, South Carolina. He assisted in the fitting out of USS Mitscher at the Bath (Maine) Iron Works and became Executive Officer of that destroyer leader upon her commissioning, May 15, 1953.

From February to July 1955 he attended the Armed Forces Staff College, Norfolk, Virginia, after which he served as a member of the Joint Intelligence Group, Joint Staff, Joint Chiefs of Staff, Washington, DC. Ordered to the Bethlehem Steel Company Plant, Quincy, Massachusetts, he was Prospective Commanding Officer of USS Blandy (DD-943), and assumed command of that destroyer when she was commissioned, November 26, 1957. In September 1959 he reported as Operations Officer on the Staff of the Commandant of the Sixth Naval District, with headquarters in Charleston, South Carolina. He remained there until February 1962 and the next month became Commander Destroyer Division Sixty-two From August 1963 he was Chief of the Navy Section, Military Assistance Advisory Group, Belgium, with headquarters in Brussels, and the following month was assigned to the Staff Offices of the North Atlantic Treaty Organization, Office of the Secretary of Defense, Washington, DC.