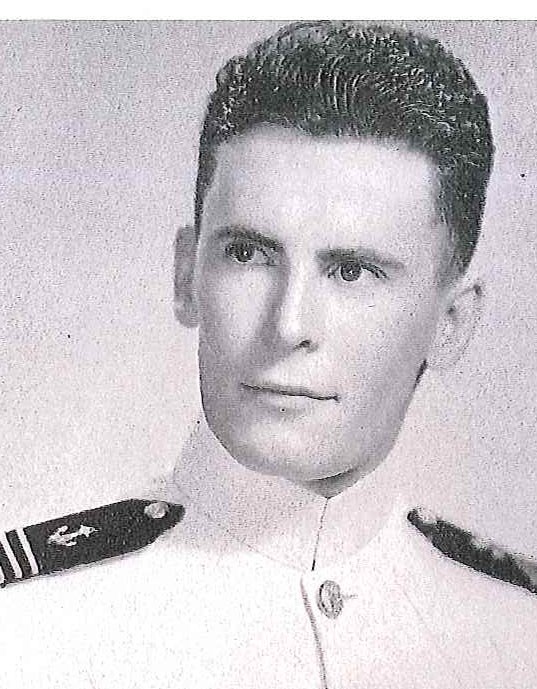 John Martin De Largy was born in Cleveland, Ohio, on June 10, 1920, son of John Sylvanus and Lucy May (McCormack) De Largy. He attended Miami University, Oxford, Ohio and Baldwin Wallace College, Berea, Ohio, prior to entering the US Naval Academy, Annapolis, Maryland, on appointment from his native state in 1940. Graduated with the Class of 1944 on June 9, 1943 (accelerated course due to World War II), he was commissioned Ensign on that date and subsequently attained the rank of Rear Admiral, to date from July 1, 1972.

Following graduation from the Naval Academy in 1943, he served as an Air Observer at the Naval Air Advanced Training Command, Jacksonville, Florida, before reporting in September of that year on board USS Hilary F. Jones (DD-427), in which he had duty as Gunnery and Executive Officer. While on board that destroyer, he participated in the invasion of Southern France and is entitled to the Ribbon for and a facsimile of the Navy Unit Commendation awarded the Hilary P. Jones. In April 1946 he joined USS Ralph Talbot (DD-930) as Executive Officer and in May 1946 was detached to serve as Flag Lieutenant to Commander Service Force, US Pacific Fleet. During March and April 1947 he was Aide to the Commandant of the Eleventh Naval District, headquartered in San Diego, California, after which he was assigned as Electrical Officer on board USS Fargo (CL-106).

Hospitalized from May to August 1948, he next had duty in connection with Universal Manpower Training Planning in the Bureau of Naval Personnel, Navy Department, Washington, DC. In November 1948 he returned to the Naval Academy to serve as Fourteenth Company Officer. He joined the Staff of Commander Escort Squadron TWO as Operations Officer in July 1950 and in November that year transferred, in a similar capacity, to the Staff of commander Destroyer Squadron TWENTY-TWO. He assumed command of USS LSMR 514 in September and during the period December 1953 to July 1955 commanded USS Haveson (DER-316).

He completed the Command and Staff Course at the Naval War College, Newport, Rhode Island in June 1956, then had duty in the Personnel Allocations Plans Section, Personnel Plans Division, Office of the Chief of Naval Operations, Navy Department. He remained there until October 1958, when he was ordered as Prospective Commanding Officer of USS Morton (DD-948), building at the Ingalls Shipbuilding Corporation, Pascagoula, Mississippi. He assumed command of that destroyer upon her commissioning, May 26, 1959. After shakedown and training operations, the Morton deployed to the western Pacific in January 1960, where she participated in Operations BLUE STAR, a joint Navy-Marine-Air Force amphibious operation in March and made a special “People-to-People” visit to Bombey, India, before returning to the west coast in May. In October 1960 he joined the Staff of Commander Destroyer Flotilla SEVEN as Operations Officer and in May 1962 reported as Chief Staff Officer to Commander Amphibious Squadron ONE.

In July 1963 he reported for instruction at the Industrial College of the Armed Forces, Washington, DC, and in 1964 received his Master of Arts degree in International Affairs from George Washington University. He assumed command of Destroyer Squadron TWO HUNDREND TWENTY-TWO in August 1964 and in October 1965 become Head of the Manpower Requirements and Authorization Branch in the Office of the Deputy Chief of Naval Operations (Manpower and Naval Reserve). He was awarded the Legion of Merit for his “…invaluable contribution toward gaining recognition for the validity of the Navy’s manpower requirements…”

In March 1968 he assumed command of USS Chicago and was awarded the Bronze Star Medal with Combat “V”. The citation follows in part: “For meritorious service…from February 24 to September 4, 1969 during combat operations against the enemy…He responded quickly to the challenge of the Sea of Japan operations which had been initiated after the North Koreans shot down an unarmed US Navy EC-121. He developed anti-air warfare and TALOS missile shoot plans for these operations at the request of the Commander Carrier Division ONE. While in the Gulf of Tonkin, during a period when his responsibilities were twofold, Captain DeLargy did not allow the operational readiness of his ship to be compromied. On two occasions the Combat Information Center expertly handled potentially serious situations…”

He was detached from the Chicago in September 1969, then served as Head of the Program Change Control Branch, Office of the Chief of Naval Operations. In June 1972 he reported as Deputy Chief of Staff for Logistics, Personnel and Administration (title was changed in September 1973 to Deputy Chief of Staff for Management/Fleet Inspector General) to the Commander in Chief, US Pacific Fleet.