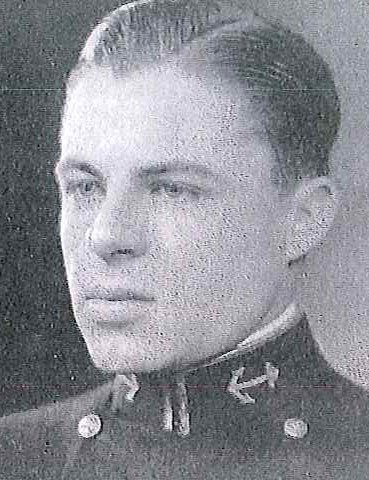 Glover Trenholm Ferguson was born in Baltimore, Maryland, on June 29, 1912, son of James F. and Mary (Trenholm) Ferguson. He attended Annapolis (Maryland) High School and the Severns School, Severna Park, Maryland, prior to enlisting as Seaman Apprentice in the US Navy. He had basic training at the Naval Training Station, Hampton Roads, Virginia, and in September 1929 was honorably discharged to enter the US Naval Academy, Annapolis, Maryland, on a congressional appointment. Graduated on June 1, 1933, he was commissioned Ensign in the US Naval Reserve due to legislative action of the previous year. He obtained Second Mate’s papers in the Merchant Marine and had two cruisers—the first to Australia, China, Formosa and the Philippines and the second to Gulf ports, he was commissioned Ensign in the US Navy on June 19, 1934 and subsequently advanced in rank to that Captain, to date from July 1, 1952.

After receiving his commission in 1934, he joined USS Mississippi and in December 1935 was detached for duty in USS Clark. In June 1939 he reported on board USS New Orleans and was attached to that cruiser, undergoing overhaul at Pearl Harbor, Territory of Hawaii, when the Japanese attacked the Naval Base there on September 7, 1941. Receiving only minor damage in the attack, his ship subsequently participated in the Battle of the Coral Sea and Midway and in operations at Guadalcanal. She was again damaged, this time on November 30, 1941, by torpedoes from Japanese destroyers during the Battle of Tassafaronga. “For conspicuous gallantry and intrepidity in action… during an engagement with enemy Japanese naval forces in the Solomon Islands Area on the night of November 30, 1942…” he was awarded the Silver Star Medal. The citation further states in part:

“After his ship had been severely damaged by a terrific explosion, Lieutenant Ferguson, with utter disregard for his own personal safety, entered gas-filled and flooding compartments and worked tirelessly to save his ship…”

Detached from the New Orleans in September 1943, he returned to the Naval Academy, where he served as an Inspector in Gunnery until August 1945. He then joined USS Oregon City a Navigator, and in July 1946 reported as Executive Officer of USS St. Paul. He continued service afloat from October 1947 to December 1948 as Commanding Officer of USS Wiltsie, after which he was assigned as Head of in Inactive Officer Section in the Distribution Branch, Bureau of Naval Personnel, Navy Department, Washington, DC.

He was Commander Escort Destroyer Division Twelve from February 1952 to April 1953, when he joined the staff of Commander Service Force, Pacific Fleet as Ordnance and Gunnery Officer. In September 1956 he assumed command of USS Henrico and in January 1958 became Director of the Requirements Division, Bureau of Naval Personnel, Navy Department. In July 1959 he reported as a student at the National War College, Washington, D.C., and upon completion of the course in July 1960, assumed command of USS Boston. Detached from that guided missile heavy cruiser in October 1961, he was assigned duty on the staff of Commander Hawaiian Sea Frontier.