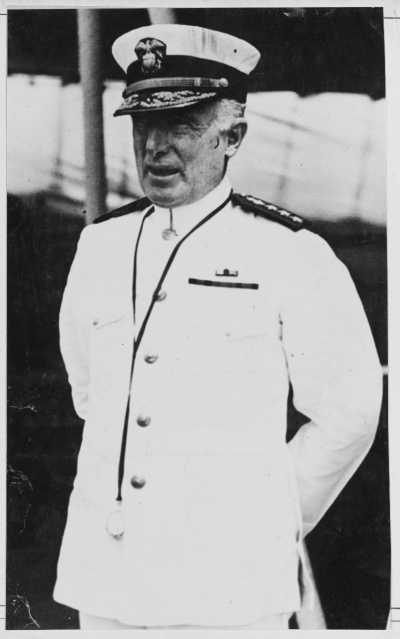 Henry Braid Wilson was born in Camden, New Jersey, on 23 February 1861. He was appointed Cadet Midshipman from the First District of New Jersey on 22 September 1876, and was graduated from the Naval Academy with the Class of 1881. Commissioned Ensign (junior grade) on 1 July 1883, and subsequently attained the rank of Captain on 4 March 1911. Selected for the rank of Rear Admiral by the Navy’s first Selection Board, he assumed that rank on 1 July 1917, was promoted to Vice Admiral to date from 25 September 1918, and to Admiral, from 30 June 1919. He was transferred to the Retired List of the Navy, for statutory age, on 23 February 1925, in the rank of Rear Admiral, but by Act of Congress of 21 June 1930, authorizing World War I Flag officers to be retired in the highest rank held on active duty, he was promoted to Admiral, USN, Retired, on that date.

After graduation from the Naval Academy on 10 June 1881, he served at sea for six years, with consecutive duty in USS Tennessee, Flagship of the North Atlantic Station; the training ship Saratoga (for more than four years engaged in training Apprentice Boys, during which he first evidenced his interest in the enlisted me, which never lessened throughout his career); and the Receiving Ship New Hampshire. For a brief period he was with a party making astronomical observations in the West Indies, after which he was ordered to USS Albatross, assigned to the Coast Survey and Fish Commission. On board the Albatross he made three cruises in the Bearing Sea, and took part in the deep sea exploration preliminary to the laying of the cable between San Francisco and Honolulu. After his return in 1894, he spent two years on the Staff of the naval War College, Newport, Rhode Island.

He next served on board USS Michigan in the Great Lakes, then gunboat Bancroft in the Eastern Mediterranean, returning in Bancroft to the West Indies at the outbreak of the Spanish-American War in 1898. Then a Lieutenant, he was highly commended for his coolness and bravery in action. He joined USS Indiana in October 1898, and subsequently was assigned to equipment duty in connection with the building of the battleships Alabama and Maine at William Cramp and Sons Shipyard, Philadelphia. In 1901 he was sent to the Asiatic Station for duty as Executive Officer of the iron gunboat Don Juan de Austria, a prize of the Spanish-American War, and later served, first as Navigator and afterward as Executive Officer of USS Kentucky, Flagship of Rear Admiral Robley D. Evans, USN, Commander in Chief, Asiatic Fleet.

On his return to the United States in 1904, he was ordered to the Bureau of Navigation, Navy Department, Washington, DC, where he was in charge of the Enlisted Personnel Section of that Bureau. Four years later he was ordered to command USS Chester, scout cruiser. He returned to the Bureau (second in command) until ordered the following year to command USS North Dakota, a battleship of the First Division, Atlantic Fleet. In this command his reputation for smart ship-handling and all-around seamanship and ship-keeping came to full attention.

He reported in November 1913 for duty as President of the Board of Inspection and Survey, Navy Department, and served in that assignment until May 1916, when he was ordered to the Newport News Shipbuilding and Dry Dock Company, Newport News, Virginia, where USS Pennsylvania was building. He placed in commission and assumed command of USS Pennsylvania, Flagship of the Commander in Chief, Atlantic Fleet (Admiral Henry T. Mayo, USN), at the time the largest and finest battleship in the US Navy. He was in command of the Pennsylvania in Guantanamo Bay, Cuba, when diplomatic relations with Germany were broken. With war imminent, and being on the promotion list for Flag rank, he was detached from the Pennsylvania and in April 1917 was ordered to form, organize and command the Patrol Force of the Atlantic Fleet, his pennant in USS Olympia (which had been Admiral Dewey’s Flagship at the Battle of Manila Bay). These Patrol Squadrons, so hurriedly got together under the impetus of war, were a composite of cruisers, destroyers, gunboats, Coast Guard cutters, and sea-going yachts taken over from their private owners.

The assigned mission was to protect shipping in the Atlantic waters of the United States, from Maine to the Panama Canal. Later in the summer of 1917 some of these ships, as US Patrol Squadrons, were sent to Gibraltar to base. Wilson, then a Rear Admiral, had transferred his flag to USS Birmingham in early August, after the grounding of the Olympia, and arrived at Gibraltar in her on 18 August. His forces were soon engaged in serving as ocean escorts for convoys in the Mediterranean, and between Gibraltar and the British Isles.

Shortly after his arrival at Gibraltar there was need for his services in French waters, and on 23 October 1917, he left Gibraltar with three members of his Staff overland through Spain for Paris. After a short conference trip to London, he reported on 1 November 1917, for duty as Commander, US Naval Forces on the French Coast, with Headquarters at Brest. He continued in this duty until 30 January 1919. During that period all US naval sea, shore and aviation activities in France were under his command.

His paramount mission was escorting troop and storeship convoys to and from France. It is especially noteworthy that not one passenger was lost by enemy action either inbound or outbound in his area of command. This is a distinct tribute to his skill and leadership, for many months the available escort vessels were inadequate in size, speed and numbers. For example, he had no true combatant type ship capable of escorting the Leviathan. The adopted alternative was to depend on her speed and run her in convoy with the Great Northern and Northern Pacific, which could maintain position on her at high speed. Such enforced makeshifts were usual.

Another striking accomplishment of the navy in France was the building of the fifteen US Naval Aviation Stations along the French Coast. These were erected by men of the US Naval Forces in France, and were completed and operating in ten months. One of his most widely known and difficult decisions made during this period was the one accepting the responsibility for the press dispatch, sent without his prior knowledge, which promulgated the False Armistice a few days before the True Armistice was signed on 11 November 1918.

He was awarded the Distinguished Service Medal with citation: “For exceptionally meritorious service in a duty of great responsibility as Commander Patrol Forces Atlantic Fleet, and Commander, U. S. Naval Forces in France, in successfully cooperating with the French Navy and in expeditiously operating transports and cargo ships in French ports and War Zones.” He was also awarded the Distinguished Service Medal by the War Department, and in addition received foreign decorations as follows: Grand Officer of the Legion of Honor, by France; Grand Cordon of the Sacred Treasury, by Japan; Commander of the Order of St. Maurice and St. Lazarus, by Italy; and Grand Official of the Military Order of Avis, by Portugal.

On 15 February 1919, he returned to the United States, his flag in USS New Mexico, for duty as Commander Squadron Four, Division Eight, Atlantic Fleet. In June 1919 he was designated Commander in Chief, Atlantic Fleet, and hoisted his flag in USS Pennsylvania, of which he had been the first CO. Upon mobilization of the Atlantic and Pacific Fleets for maneuvers at the Pacific End of the Canal Zone, he assumed command of the combined forces as Commander in Chief, US Battle Fleet. Detached in June 1921, he reported in July for duty as Superintendent of the Naval Academy, and served as such until his transfer to the Retired List on his 64th birthday, 23 February 1925.

During nearly four years of his incumbency, the Naval Academy passed the greatest transformation since its beginning in 1845, a transition from a Training School to the University it still is. Though classed as Training School in 1921, it had by the time of his retirement, and largely through his efforts, became a full-fledged member of the Association of American Universities and had qualified for the subsequent authorization to award the degree of Bachelor of Science to its graduates. The entrance requirements had been raised to compare favorably with those of the better Engineering Colleges. The certificate method of admission had been strengthened to its present unchallenged position. The Midshipmen’s service uniforms had been changed to conform in general to those the graduates would require as officers of the navy. The policy of rotating Midshipmen officers to give a wider spread of command experience and responsibility among all members of the First Class had become a fixture. A text book on Naval Leadership had been especially prepared and introduced into the curriculum. More privileges, though in limited degree, had been allowed First Classmen on the theory that the transition from Midshipman to officer would be smoother and more efficient if less abrupt than in the past. Throughout his entire tenure he emphasized what he called the “Eternal Worth of Character,” for without it no naval officer could succeed. He also emphasized the need for smartness in person and dress, and taught this daily by precept and example. He promulgated a Mission of the Academy, which started thus: “To mold the material received into educated gentlemen, thoroughly indoctrinated with honor, uprightness, and truth…” That theme of honesty and integrity was kept before the Midshipman constantly.

His tour at the Naval Academy was marked, as was his entire Naval career of forty-eight years, by his particular interest in the development and training of personnel. The first class to graduate under his command was the Class of 1922, the members of which dedicated their Lucky Bag (class book) to him with the following lines:

“To our Superintendent, Admiral Henry B. Wilson, U. S. Navy, the Class of 1922 respectfully dedicates this number of the Lucky Bag - inspired as we have been by his devotion to the Navy and his continued efforts to make us better material for officers, it is our hope that our future success may, in some degree at least, reach the heights which his has attained, and that we may occasion in our subordinates that same spirit of cooperation which he has inspired in us.”

It is of considerable interest that when the Class of 1922 held its Thirtieth Reunion at the Naval Academy in 1952, they invited Admiral Wilson to attend in order to again thank him for the inspiration he had been to them as Midshipmen. His health, unfortunately, did not permit his accepting the invitation. Admiral Wilson died in New York City on 30 January 1954, survived by his wife, Mrs. Ada Chapman Wilson, who resided at The Grosvenor Hotel.