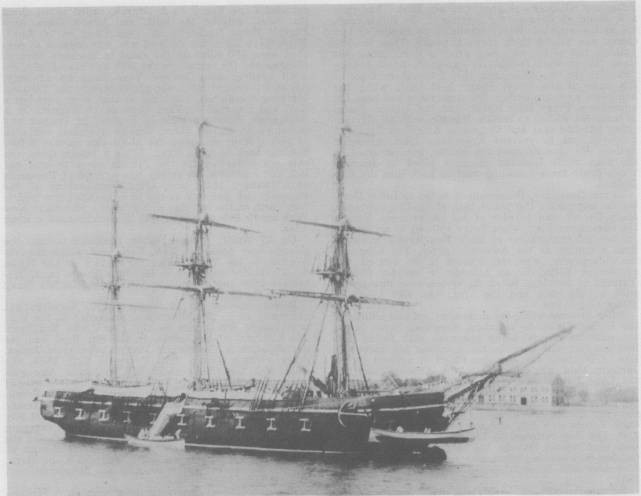 Caption: The sailing sloop-of-war Saratoga, after the Civil War, in standard wooden-ship finish of the period. The apparent height of her weather-deck bulwarks is increased by the hammocks stowed along their top behind canvas screens.

The third Saratoga, a sloop of war laid down in the summer of 1841 by the Portsmouth Navy Yard, Portsmouth, N.H., was launched on 26 July 1842; and commissioned on 4 January 1843, Comdr. Josiah Tattnall in command.

The ship sailed from Portsmouth on 16 March 1843 but was dismasted in a gale the next day and forced to return to Portsmouth for repairs. She got underway again on 3 May and proceeded down the coast to New York Harbor to prepare for service on the west coast of Africa protecting American citizens and commerce and suppressing the slave trade. On the morning of 5 June, she was towed to Sandy Hook, N.J., where, at noon, Commodore Matthew C. Perry came on board and broke his broad pennant as Commander of the Africa Squadron. At mid-afternoon, the ship stood out to sea, proceeded via the Canary and the Cape Verde islands and reached Monrovia, Liberia, on 1 August. Saratoga operated along the coast of west Africa protecting American citizens and commerce and suppressing the slave trade. She occasionally returned to the Cape Verdes for replenishment and rest for her crew. At Porto Grande, in the Cape Verdes, Saratoga rendezvoused with Decatur and Macedonian on 9 September, and Perry shifted his flag to the latter two days later. Much of Saratoga's service in the Africa Squadron was performed in implementing Perry's policy of supporting Liberia which had been founded some two decades before on the African "Grain Coast" as a haven for freed Negroes from the United States. The new colony was deeply resented by the local, coastal tribes which had acted as the slave trade's middlemen, buying slaves from their bushmen captors and selling them to masters of slave ships. Missing their former profits from the now outlawed commerce in "black ivory," these natives gave vent to their anger by harassing, threatening, and sometimes attacking the black colonists from America. From time to time, they also preyed upon American merchant shipping.

Perry's problem was one of reconciling the conflicting demands of protecting American interests on the African coast, of remaining aloof from African internal affairs, and encouraging the colonists in Liberia. The Commodore's prudence, firmness, fairness, and tact in reconciling these conflicting objectives was illustrated by his handling of two incidents soon after the squadron returned to Liberia in the early autumn. Reports greeted him upon arrival that the hostile tribes had been making trouble for the colonists in the colony of Sinoe and had killed two sailors from American schooner, Edward Burley.

Saratoga sailed from Monrovia on 21 November, and Perry followed two days later with the rest of the squadron bringing along as a guest, Liberian Governor Joseph Jenkins Roberts. The American warships assembled at Sinoe on the 28th. The next day, a large force of Sailors and Marines accompanied the Commodore and Governor ashore for a conference with an assembly of tribal kings. First on the agenda was the Edward Burley incident. Governor Roberts' questioning of a number of witnesses divulged the following story:

After the schooner's skipper, Captain Burke, had paid a Krooman in advance for serving in the ship's crew, the native deserted. Burke retaliated by capturing two canoes and taking their crews prisoner. Then he despatched two of his own men after a third canoe, but these sailors were themsleves captured. After cruelly torturing the two Americans, they killed them. Once he felt sure of the story, Perry held that, while the homicides were unjustified, the Americans had been the aggressors. Perry then stated that the United States government wished to remain friendly with all African tribes but had sent him to protect American lives and property and to prevent Americans from wronging natives. He then dropped the matter, but remained in the area while Liberian colonists aided by friendly tribes drove trouble-making natives back into the hinterland.

In mid-December, the squadron sailed to Little Berebee to investigate the plundering of trading schooner, Mary Carver, and murder of her entire crew. During the ensuing palaver, when Perry refused to accept the far-fetched explanation of King Ben Krako, a native fired a musket at the American party. The king and his interpreter, who was known to be one of the murderers, bolted in an attempt to escape. Comdr. Tattnall of Saratoga felled the treacherous interpreter with a rifle shot and the king was also killed in attempting to flee.

After demonstrating the determination and ability of the United States to maintain American honor along the coast of Africa, being generous with friend and firm but fair with enemies, the squadron got underway late in the year for Madeira where it arrived on 18 January 1844. She returned to the African coast via the Cape Verdes and reached Monrovia on 2 March. The late spring was devoted to a cruise eastward along the coast to the Bight of Biafra. Yellow fever plagued the crew during the summer. The ship sailed for the Cape Verdes on 8 July and reached Porto Praia on the 21st. The ship returned to Liberia in September for a last visit before leaving the African coast in mid-October and heading home. She reached Norfolk on 22 November and decommissioned there on 10 December 1844.

Recommissioned on 15 March 1845, Comdr. Irving Shubrich in command, Saratoga was assigned to a squadron commanded by Commodore Robert P. Stockton and originally intended for duty in European waters. However, on 22 April, because of tension between the United States and Mexico over an impending annexation of Texas, this naval force was ordered to the Gulf of Mexico. Saratoga departed Norfolk on 27 April and proceeded to the Texas coast. She remained at Galveston with Stockton for the remainder of spring. The Commodore sailed for Washington on 23 June after ordering Saratoga and the rest of his squadron to Pensacola to replenish their stores.

On 3 July, Secretary of the Navy Bancroft transferred Saratoga to Commodore Conner's Home Squadron which was then operating ". . . in such a manner as will be most likely to disincline Mexico to acts of hostility . . ." Saratoga operated in the gulf attempting to help Conner carry out this mission until she sailed from Pensacola on 4 December for Rio de Janeiro to join the Brazil Squadron.

The sloop-of-war cruised along the South American coast until mid-summer. Then, under orders to the Pacific for service under Commodore Sloat on the California coast, she got underway on 24 August and headed south along the coast. However, after rounding Cape Horn, the sloop-of-war ran into a fierce storm which caused severe damage and forced her to turn back toward home. She reached Hampton Roads on 29 December and decommissioned on 9 January 1847.

Repaired at the Norfolk Navy Yard, Saratoga was recommissioned in 1847, Comdr. David G. Farragut in command. Assigned to the Home Squadron, she rounded Cape Henry on 29 March, sailed south along the coast, entered the gulf, and joined Commodore Perry's Home Squadron off Vera Cruz on 26 April. Three days later, the sloop-of-war was ordered to proceed some 150 miles up the coast to blockade Tuxpan. She reached the station on the 30th and remained there until heading back toward Vera Cruz on 12 July. About a fortnight later, she got underway for Tabasco, carrying dispatches; remained at that river port but a day, and returned to Vera Cruz on 11 August. On 1 September, Saratoga relieved Decatur at Tuxpan and remained on station there, despite a serious outbreak of yellow fever on board, for about two months before heading back to Vera Cruz. After a month there, the ship got underway for the Florida coast to land her sick and replenish her stores. She arrived at Pensacola on 6 January 1848; and, after disembarking all the seriously sick patients at the base hospital, got underway north on the last day of the month. She made New York on 19 February and was decommissioned a week later.

On 17 April, a week after recommissioning, the sloop-of-war departed New York and proceeded via Norfolk to the West Indies for service in the Home Squadron. She returned to Hampton Roads on 27 November 1849 and decommissioned at the Norfolk Navy Yard on the 30th.

Recommissioned on 12 August 1850, Saratoga got underway on 15 September and proceeded to the western Pacific for service in the East India Squadron. The highlight of her service in the Far East was her participation in Commodore Perry's opening of Japan. After visiting Japan with Perry in July 1853, she sailed for the China coast and protected American interests at Shanghai while Japanese officials discussed Perry's proposals. She returned with Perry in February 1854, and, after the formal signing of a treaty between the United States and Japan on the last day of March, sailed for the Sandwich Islands carrying Comdr. H. A. Adams, to whom Perry had entrusted the American copy of the treaty. After leaving Adams at Honolulu, Saratoga sailed south, rounded Cape Horn, reached Boston in September, and was decommissioned on 10 October 1854.

The sloop-of-war was recommissioned on 6 September 1855 and, but for a period out of commission in ordinary at Norfolk early in 1858, cruised in the Caribbean and the gulf until decommissioning at Philadelphia on 26 June 1860. Reactivated on 5 November 1860, she sailed from Philadelphia 10 days later to return to the scene of her first cruise, the west coast of Africa. On 21 April 1861, she captured slaver, Nightingale, off Kabenda, Africa, freeing a cargo of numerous slaves. After word of the outbreak of the Civil War reached Saratoga, she returned to the United States and decommissioned at Philadelphia on 25 August 1861.

Recommissioned on 24 June 1863, the ship was ordered to the Delaware capes for guard duty off Delaware breakwater protecting Union shipping approaching and departing Delaware Bay and performed this duty through the end of the year. On 13 January 1864, she was ordered to Carolina waters for duty in the South Atlantic Blockading Squadron. During her service off the lower Atlantic coast, landing parties from the ship made several raids in August and September which resulted in the capture of many prisoners and the taking or destruction of substantial quantities of ordnance, ammunition, and supplies. A number of buildings, bridges, and salt works were destroyed during the expedition.

As the Civil War was drawing to a close, Saratoga was detached on 4 April 1865, sailed north, and was decommissioned on 28 April. For the next decade, only two periods in commission for coastal operations (1 October 1867 to 7 July 1869 and 16 May to 14 October 1871) interrupted the veteran ship's rest in ordinary.

Saratoga reactivated on 1 May 1875 for a year as a gunnery ship at Annapolis. Another year in ordinary beginning 7 May 1876 preceded her final recommissioning on 19 May 1877 to start more than eleven years as a school ship training naval apprentices. This duty took her to various naval bases and yards along the Atlantic coast and to Europe on occassion. She decommissioned 8 October 1888.

The ship served on loan to the state of Pennsylvania between 1890 and 1907, operating as a state marine school ship in Philadelphia until sold there on 14 August 1907 to Thomas Butler & Co. of Boston.