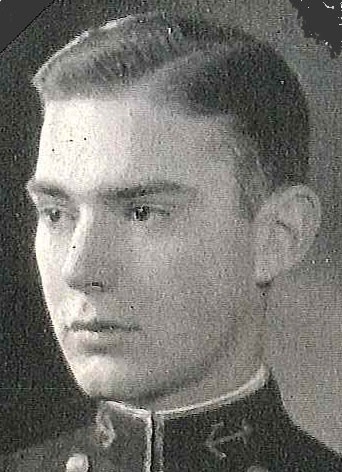 Born in Babylon, New York, Benjamin Prince Field, Jr., was appointed to the Naval Academy from that state in 1927. Graduated with the Class of 1931, he had consecutive duty in the destroyer Perry and the battleship California until 1933, when he joined the staff of Commander Battleship Division Three. In 1935 he participated in the Aleutian Island Survey Expedition as Survey Officer of the USS Gannet and later that year was assigned to the destroyer Pillsbury as Gunnery Officer.

Between 1938 and 1940 he was an Instructor in the Department of Seamanship and Navigation at the Naval Academy, after which he had duty as Flag Lieutenant to Commander Cruiser Division Eight. In June 1942, five months after the United States entered World War II, he joined the destroyer Boyle to serve as Executive Officer until February 1943 and as Commanding Officer until October 1944. For outstanding services as Commanding Officer of the Boyle during 1943 and 1944 he was awarded the Silver Star Medal, the Bronze Star Medal with Combat “V,” and three Letters of Commendation with authorization to wear the Commendation Ribbon and two bronze stars.

He commanded the destroyer Wiley, operating in the Pacific area, until May 1946, when he was detached for a two year tour of duty as Head of the Seamanship Division at the Naval Academy. In 1949 he completed a course in personnel administration at Stanford University, receiving the degree of Master of Arts. After an assignment, which extended to July 1951, as Assistant Personnel Officer on the staff of Commander Service Force, US Atlantic Fleet, he assumed command of the attack cargo ship Alshain.

Silver Star Medal: “For conspicuous gallantry and intrepidity in action as Commanding Officer of the USS Boyle during the amphibious invasion of Southern France between August 18 and August 30, 1944. By skillfully maneuvering his ship and accurately directing its gunfire, Commander Field contributed to the effective support of the advancing ground forces in clearing the enemy from coastal positions on the right flank of the central assault area. Braving strong return fire, he conducted the shore bombardment with competence and vigor, silenced several enemy shore batteries, saturated enemy troop and tank concentration and harassed the interior supply lines. His able participation in this action materially assisted in the expulsion of the enemy from Southern France…”

Bronze Star Medal: “For meritorious achievement as Commanding Officer of the USS Boyle, during advanced operations in support of the Allied Armies in Italy from May 15 to August 5, 1944. Commencing with the Army’s breakthrough at the Anzio beachhead and continuing with the coastal advance northward, Commander Field operated his ship in support of the ground movement, carrying out effective shore bombardments of enemy installations and concentrations, operating against hostile submarine and E-boat attacks on vital shipping and supporting advanced minesweeping formations in clearing heavily mined approached to ports occupied by our forces, despite opposing aerial attack and the restricted and dangerous waters in which his ship was called upon to operate…”

Letter of Commendation (SevNav): “For heroic performance of duty as Commanding Officer of the USS Boyle during the amphibious assault on the Island of Sicily from July 9 to 13, 1943. Expertly maneuvering his ship and directing her fire, Lieutenant Commander Field provided excellent gunfire support for our assaulting troops in the initial landing at Scoglitti, Sicily and, by his skillful leadership in shore bombardment of enemy positions, materially assisted the rapid advance of our invading troops.

Letter of Commendation (CinClant): “For meritorious service as Commanding Officer of the United States Navy warship engaged in escort of convoy operations in the Atlantic during the Second War. He operated his ship with skill and efficiency under the hazards of submarine infested waters and adverse weather conditions and thereby contributed materially to the successful convoying of material and men vital to the fighting fronts of Europe…”

Letter of Commendation (Com8thFleet): “For outstanding performance of duty as Commanding Officer of the USS Boyle while performing convoy escort duty in the Central Mediterranean on November 7, 1943… After a heavy aerial attack on the convoy had resulted in torpedoing of a screen destroyer and of two troop-laden transports, you skillfully and coolly took part in rescue operations although in spite of your persevering salvage efforts the two stricken transports were lost in the heavy seas. Your able seamanship was largely responsible for the recovery of more than one thousand survivors and your superb conduct of an anti-submarine patrol was instrumental in averting additional attacks again the ships which had been damaged or were immobilized during the rescue operations…”