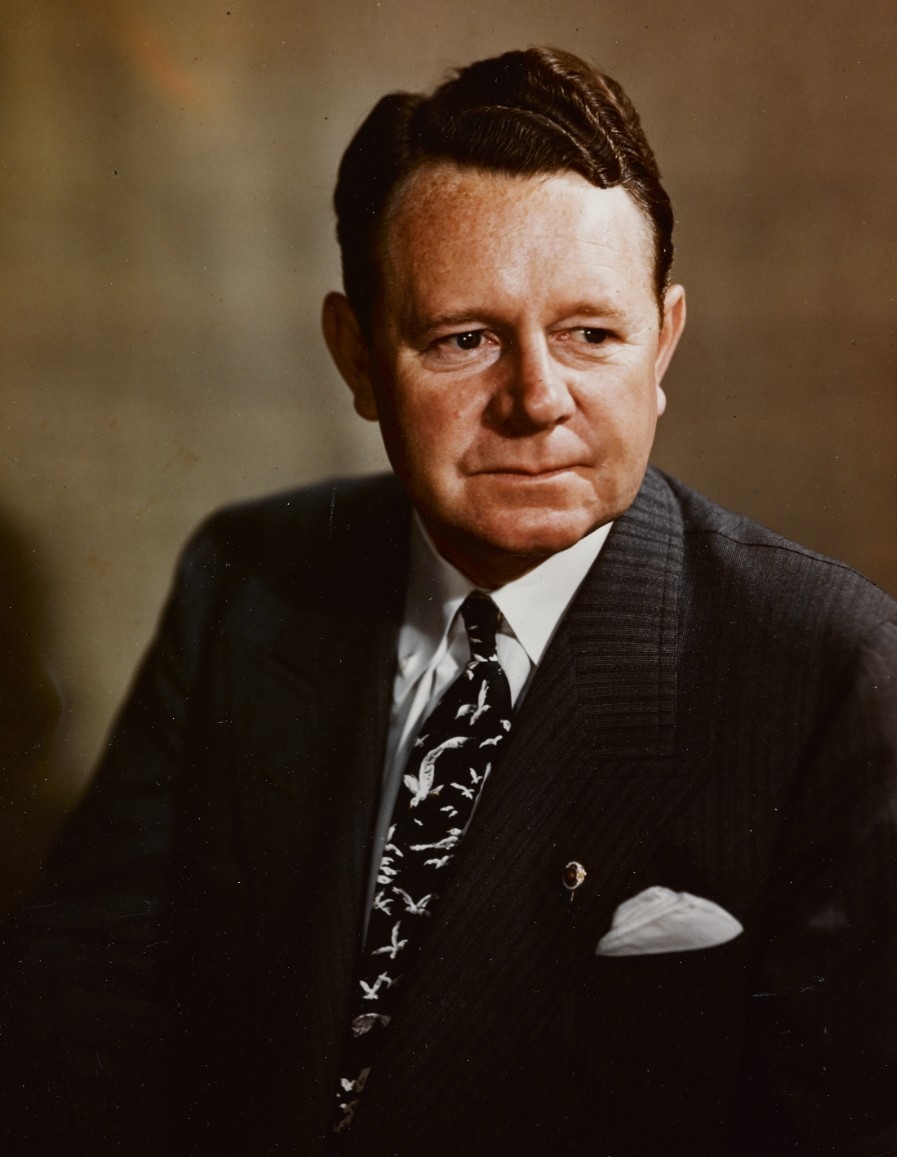 John Lawrence Sullivan of Manchester, New Hampshire, first Secretary of the Navy (September 1947 - May 1949) to serve under the National Defense Act of 1947, was appointed to that office by President Harry S. Truman on 21 August 1947, and was sworn into office in the Pentagon by Chief Justice Fred M. Vinson on 18 September 1947.

During his tenure of office as Secretary, Mr. Sullivan had been the protagonist of strong and efficient submarine and carrier forces for the Navy, of utmost cooperation between the Navy and its industrial suppliers, revision of Naval Justice procedures and the building up of expanded Naval Reserve components, technically trained and including a Naval Research Reserve, which could be mobilized for instant service in case of emergency. He had been a persistent advocate of Naval Preparedness as an important factor in national security and as a prerequisite to international stability and peace.

His induction into office as Assistant Secretary for Air took place under dramatic war-time circumstances aboard a fighting aircraft carrier off the Japanese mainland on 2 July 1945 (1 July 1945 Washington date). The incident was characteristic of Mr. Sullivan's avidity for first-hand information about the problems under his jurisdiction.

A lawyer by profession and a veteran of World War I, in which he served the Navy as a bluejacket, Mr. Sullivan brought to the Navy Department a background of legal activity in his native New Hampshire, five years' service as Assistant Secretary of the Treasury, and close association with veterans', civic, and welfare organizations. 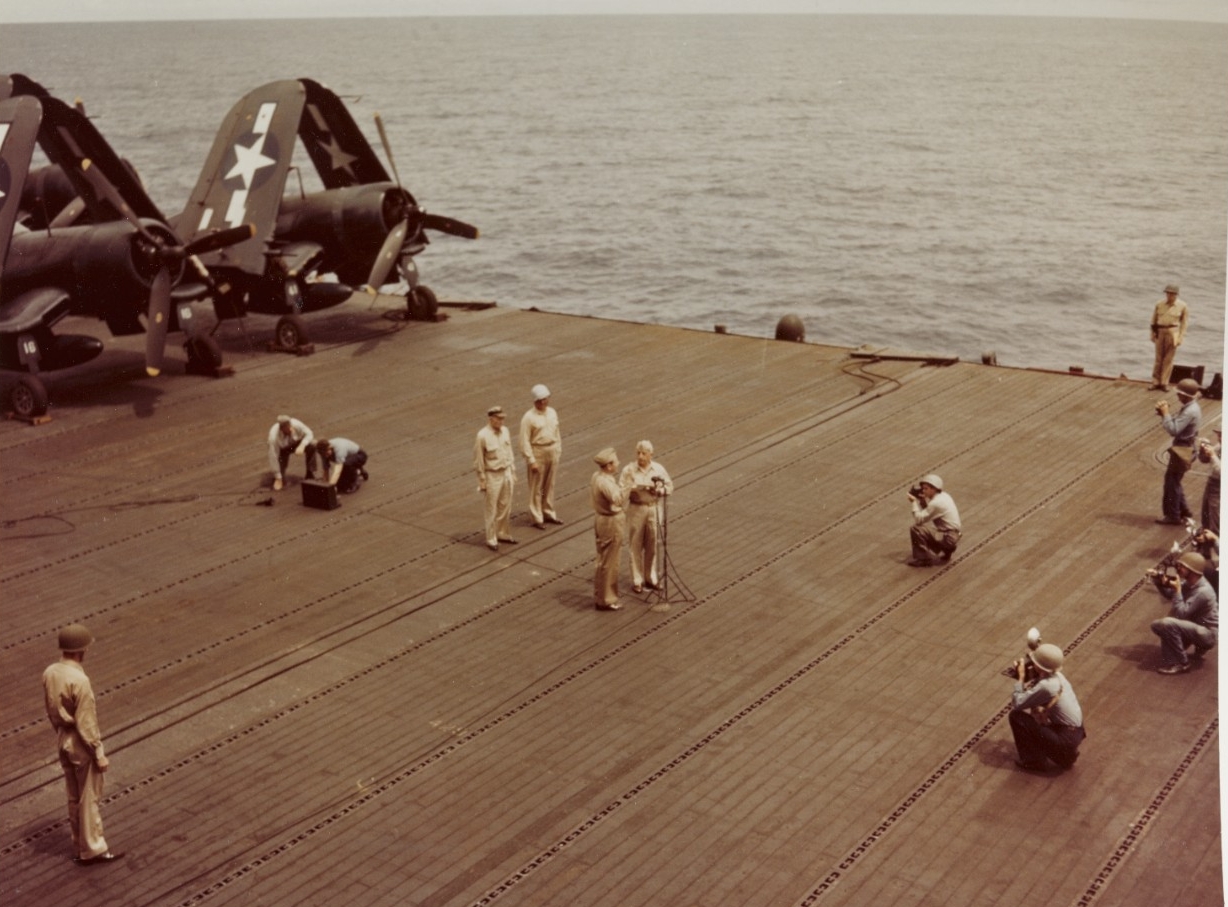 Mr. Sullivan's trip to the Pacific combat areas in Mid-1945, which was high-lighted by his taking the Oath of Office aboard the carrier, USS Shangri-La (CV-38), Flagship of the late Vice Admiral John S. McCain, USN, Commander of the Second Carrier Task Force, began on 21 June 1945, and was completed on 15 July 1945. He travelled more than 20,000 miles by air and about 5,000 miles by ship, conferring along the route with top Navy and Marine Corps leaders and with fliers and fighters from the ranks. The information and impressions gleaned during this trip and subsequent trips aboard surface and undersea craft had served Mr. Sullivan often in the determination of varied naval problems.

The swearing-in at sea was an unusual ceremony, with the deck of the carrier as the setting. Officers and men wore helmets, ready for action. The Oath of Office was administered by Admiral Aubrey W. Fitch, USN (Retired), who was then Deputy Chief of Naval Operations for Air. Aloft, patrol planes dotted the sky and standing by were other warships of the Task Force. After he had taken the oath, Mr. Sullivan told the assembly on the carrier's deck:

"We are engaged in so applying our vast sea-air power that this war may be won quickly and with as little sacrifice as possible. And with this war won, we hope that this same sea-air power will be preserved and stand ever ready to prevent new wars."

Mr. Sullivan was born in Manchester, New Hampshire, 16 June 1899, son of Patrick Henry Sullivan and Ellen J. (Harrington) Sullivan. His father was personal counsel to the late Secretary of the Navy Frank Knox, a newspaper owner in that city, and subsequently Mr. Sullivan became an intimate friend of the late Secretary Knox and served as counsel for Mr. Knox' Manchester papers. 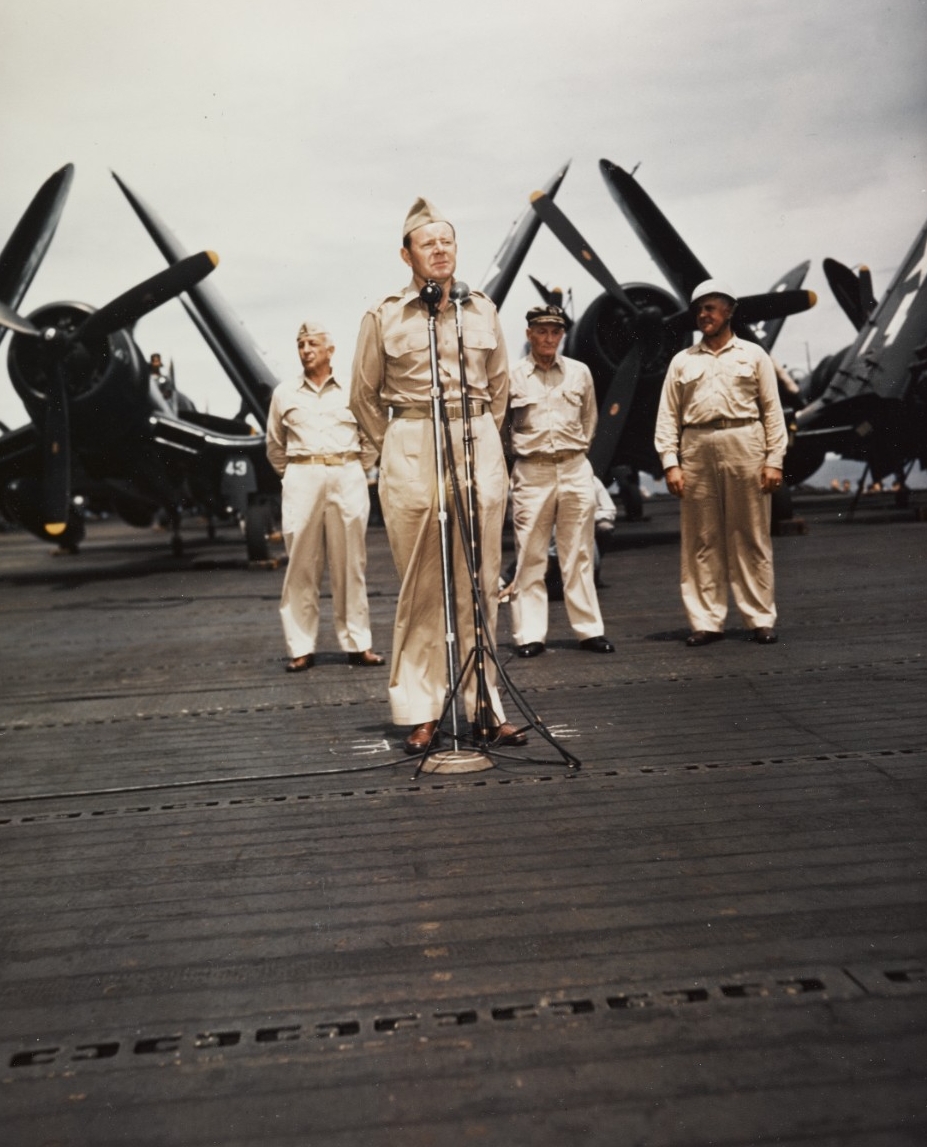 During the First World War, Mr. Sullivan entered the United States Naval Reserve Force as an Apprentice Seaman, being enrolled at New Haven, Connecticut. He reported for active duty with the Naval Unit at Yale University at New Haven. On 22 December 1918, he was released from active duty and on 30 September 1921, was discharged from the United States Naval Reserve Force in the First Naval District, Boston, Massachusetts.

Mr. Sullivan on 27 January 1948 was awarded the Medal for Merit by President Truman, with the following citation:

"JOHN LAWRENCE SULLIVAN, for exceptionally meritorious conduct in the performance of outstanding services to the United States from January, 1940 to December, 1946. Mr. Sullivan, as Assistant Secretary of the Treasury from January, 1940 to November, 1944, displayed great tact, skill and knowledge in formulating and coordinating the Treasury Department's tax legislation, which gained for him national prominence as an authority on taxation matters. As Assistant Secretary of the Navy for Air, and as Under Secretary of the Navy, he was a vital factor in the operation and administration of the Navy Department, and has made, by his vision, courage and intelligent approach to the many problems of national significance, a contribution to the administration of the Government of this country which is outstanding in every respect. Mr. Sullivan's forceful performance of his duties has been in keeping with the highest traditions of the United States, and worthy of the greatest praise."

In February, 1947 Mr. Sullivan was awarded the Treasury Department's Distinguished Service Award and Silver Medal for services rendered during the war finance program from 1941 to 1945. In June, 1948, he was awarded the honorary degree of Doctor of Laws by Duquesne University, Pittsburgh, Pennsylvania.

Mr. Sullivan had been an important figure in Democratic circles in New England. Interested in civic and welfare organizations, he was a Director of the New Hampshire Children's Aid and Protective Society; a trustee of the Daniel Webster Council, Boy Scouts of America; and a trustee of Camp Carpenter. He was an ardent fisherman and golfer.

Mr. Sullivan was a member of the New Hampshire Bar Association, the American Bar Association, the American Legion (having served as Commander of the New Hampshire Department in 1937), and the Knights of Columbus. He also was a member of Chi Phi and Delta Sigma Rho fraternities. He belonged to the Manchester Country Club and the Clover Club of Boston, the Metropolitan Club of Washington, DC, the Burning Tree Club of Bethesda, Maryland, the Chevy Chase Country Club and the Columbia Country Club of Chevy Chase, Maryland. He was a Roman Catholic.