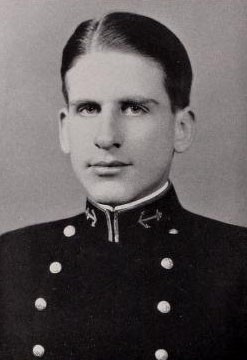 Robert N.S. Clark, the son of Colonel John A. Clark, MD, USA, Retired, and Mrs. (Anna Scott) Clark, was born on January 12, 1907, at Fort Oglethorpe, Georgia. He attended Punahou School, Honolulu, Territory of Hawaii, and Cheyenna (Wyoming) High School, prior to his appointment at large, to the US Naval Academy at Annapolis, Maryland, in 1915. As a Midshipman he was a member of the one hundred and fifty pound crew squad. Graduated and commissioned Ensign on June 6, 1929, he advanced progressively in rank to that of Captain to date from July 1, 1949, having previously served in that rank from February 28, 1946 to January 1, 1948.

Following graduation from the Naval Academy in 1929, he joined the USS Lexington, operating with the Battle Fleet and Scouting Force, successively. He served in that carrier until May 1933, after which he had consecutive duty in the destroyers Humphreys, Williamson, and Kane, all operating with Destroyers, Scouting Force. Detached from the late in April 1935 he transferred to the USS Sirius, a unit of the Naval Transport Service.

Between April 1936 and March 1938 he commanded the USS Eagle # 57, and also served as an Assistant Instructor of Naval Rserves in the Thirteenth Naval District, Seattle, Washington, following service in the USS Mindanao on South China Patrol, and additional duty as Communication Officer on the staff og Commander South China Patrol, he reported in September 1939 as Executive Officer and Navigator of the USS John D. Edwards. In November 1940 he was assigned to the USS St. Louis, first as Assistant Damage Control Officer. He was aboard that cruiser, operating in Pacific Waters, when the Japanese attacked Pearl Harbor, Territory of Hawaii, on December 7, 1941, and she saw service in the central and South Pacific Area.

He is entitled to the Ribbon for and a facsimile of the Navy unit Commendation awarded the officers and men of the USS St. Louis, and was also awarded the Bronze Star Medal, with Combat Distinguishing Device “V,” The citation for the Bronze Star Medal follows in part: “For heroic service….. in action against enemy Japanese forces during three major engagements in the Kula Gulf, from July 5 to 13, 1945. When his ship was torpedoed at the end of the third engagement on the night of July 12-13, (he) promptly and effectively directed damage control measures which enabled the St. Louis to be brought to port with a minimum of flooding…”

Detached from the St. Louis on October 1943, he became Aide to Fleet Admiral W.D. Leahy, USN, with duties in connection with the Joint Chiefs of Staff and Combined Chiefs of Staff. In that assignment he accompanied the Joint Chiefs of Staff to the Quebec (Canada) Conference in 1944, and also accompanied the Presidential Party to the Mediterranean and Yalta Conference in 1945. In May 1945 he reported as Executive Officer aboard the USS Santa Fe, operating in the Western Pacific, and participated in the closing operations of World War II and in occupation of Japan. From March 1946 to September 1947 he commanded the USS Kermit Roosevelt, serving in the China and Pacific Area, and was also assigned additional duty as Service Force Unit Commander.

Upon his return to the United States in September 1947, he reported as Assistant War Plans Officer in the Bureau of Naval Personnel, Navy Department, Washington, DC He continued to serve there until July 1949, and following instruction at the Naval War College, Newport, Rhode Island, assumed command in July 1950 of the USS Alshain. “For meritorious service…. (in that command) in action against enemy aggressor forces during the amphibious assault at Inchon, Korea, from September 15-19, 1950…” he was awarded a Gold Star in lieu of the Second Bronze Star Medal with Combat “V,” The citation continues in part:

“Maintaining his ship at the peak of efficiency, Captain Clark skillfully maneuvered the Alshain to the assigned area and directed the unloading of troops and cargo on schedule despite hazards of extreme tidal and current conditions and the constant danger from floating enemy mines. By his outstanding leadership, superb ship handling and zealous devotion to duty, Captain Clark contributed to the success of the operations…”

Detached from command of the Alshain in August 1951, he reported the next month as Professor of Naval Sceince, Naval Reserve Officers Training Corps Unit, University of Utah at Salt Lake City. In July 1954 he reported as Assistant Chief of Staff for Operations and Logistics on the staff of the Commandant Fifteenth Naval District, Commander Panama Sector, Caribbean Sea Frontier, with headquarters at Balboa, Canal Zone. On June 10, 1955 he assumed the duties of Chief of Staff and Aide to the Commandant, Fifteenth Naval District/Commander Panama Sector, Caribbean Sea Frontier.