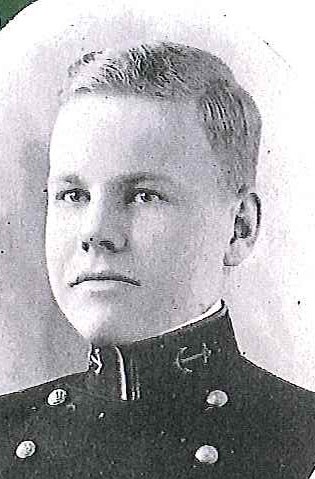 Rear Admiral Decker, son of the late Rear Admiral Benton Clark Decker, USN, and Mrs. (Mary Ida Weaver) Decker, was born in Wilmington, Delaware, on July 20, 1899. He attended the Rodgers High School at Newport, Rhode Island, before entering the US Naval Academy, Annapolis, Maryland, on appointment at large in 1916. A member of the Class of 1920, he was graduated and commissioned Ensign on June 6, 1919, and subsequently progressed in grade to that of Captain, to date from June 18, 1942. On June 30, 1949, he was transferred to the Retired List of the US Navy and advanced to the grade of Rear Admiral.

During World War I, Rear Admiral Decker had duty as a Midshipman in USS New York and USS New Jersey in the summers of 1917 and 1918, respectively, those vessels being a part of the Atlantic Fleet. He served in USS Birmingham from his graduation in 1919, until November 1920, and in USS William Jones, operating with Destroyer Squadrons, Pacific Fleet, until March 1921. Then followed engineering duty in the USS Tattnall and USS La Vallette for four and one-half years thereafter. A tour of shore duty at the Naval Training Station, San Diego, California, lasted from October 1925 until August 1927. In September of that year he joined USS Chaumont and served as her Navigator until September 1928. After brief instruction at the Naval Air Station, Pensacola, Florida, he served as Executive Officer of USS Sacramento from March 1929 until August 1930. He returned to the United States for duty as Instructor in the Department of Engineering and Aeronautics at the Naval Academy during the nest three years.

Following duty as Executive Officer of USS Dorsey from June 1933 to October 1934, he became Commanding Officer of that vessel to serve until June 1936. He then returned to the Naval Academy as an Instructor in the Department of Seamanship and Navigation from July 15, 1936, until May 28, 1938, serving temporarily aboard the USS New York during the Midshipmen’s practice cruise, June to August, 1937.

Rear Admiral Decker joined USS Astoria on July 11, 1938, and while serving as Navigator of that cruiser, went to the Far East to transport the ashes of Ex-Ambassador to the United States, Hirosi Saito, to his homeland in Japan, Detached from the Astoria in June 1939, he assumed command of USS Brazos on July 7, 1939, and served in that command until relieved on July 12, 1940.

Again returning to the Naval Academy as an Instructor in the Department of Seamanship and Navigation, he served in that capacity until January 31, 1942. He was next assigned to the New York Shipbuilding Corporation plant at Camden, New Jersey, for duty in connection fitting out USS South Dakota. Upon her commissioning on March 20, 1942, he went aboard as her Executive Officer, continuing to serve as such until December of that year.

The first engagement in which the South Dakota participated was the Battle of Santa Cruz Islands, on October 26, 1942. The speedy new battleship and the aircraft carrier Enterprise had departed from a Pacific base to strengthen the US Naval Forces in the South Pacific. The Enterprise was attacked shortly after 11 o’clock am on the morning of the 26th, and when two dozen enemy bombers dived from the sky, seven were shot down by antiaircraft batteries of the South Dakota and other vessels, but the Enterprise was hit. Her fires were extinguished quickly. After an interval, four bombs were aimed at the South Dakota, one of which struck the Number 1 turret. The South Dakota’s antiaircraft batteries’ performance in this, her first action, contributed in large measure to the successful defense of the Enterprise.

In December 1942, Rear Admiral Decker reported for duty at Panama City, Florida, where he established the Amphibious Base for the Gulf Coast area. In February 1943, he was appointed Chief of Staff to Commander Landing Craft Flotillas, South Pacific Force, and in July he became Chief of Staff and Aide to Commander Group Five, Amphibious Force, Pacific Fleet. For services during the period February 1943 to October 1944, Rear Admiral Decker was awarded the Legion of Merit and a Gold Star in lieu of a Second Legion of Merit. The citations follow:

“For exceptionally meritorious conduct in the performance of outstanding service to the Government of the United States as Chief of Staff of Commander, Landing Craft Flotillas, Third Amphibious Force, from February 1943 to May 1944. During this period, Captain Decker was largely responsible for the preparation and successful execution of the strenuous amphibious operations throughout the Solomon Islands Campaign. Due to her thorough and highly efficient training program, the assault troops carried out many difficult landings, defeating a powerful enemy at each encounter, despite strongly entrenched positions and numerically superior forces. Captain Decker served as Commander of a task unit in the initial landings on New Georgia Island, exhibiting outstanding courage and professional skill which were an inspiration to the officers and men under his command. His brilliant leadership and unselfish devotion to duty contributed materially to the defeat of the Japanese forces in the South Pacific and were in keeping with the highest traditions of the United States Naval Service.”

Gold Star in lieu of a Second Legion of Merit: (With Combat “V”)

“For exceptionally meritorious conduct in the performance of outstanding services to the Government of the United States as Chief of Staff of an Amphibious Task Force prior to and during the assault on the enemy Japanese-held islands of Peleliu an Angaur in the Palau Group from July to October 1944. An efficient and inspiring leader, zealous in the performance of duty, Captain Decker succeeded in organizing the staff within an extremely limited period of time, and, by his tireless efforts, able guidance and determined aggressiveness, contributed essentially to the early completion of this vital operation.”

Rear Admiral Decker also received a Letter of Commendation with authorization to wear the Commendation Ribbon (Combat “V”) from the Commander South Pacific, for services as Task Unit Commander in the capture of Eastern New Georgia, British Solomon Islands, on June 30, 1943.

Returning to the United States, Rear Admiral Decker had duty as Logistics Planner in the Office of the Chief of Naval Operations, Navy Department, Washington, DC. After the cessation of hostilities in August 1945, he commanded USS Maryland on “Magic Carpet” duty, returning veterans of the Pacific area to the United States. In January 1946 he was ordered to duty as Commander, Fleet Activities, Yokosuka, Japan. Transferred to the Retired List of the US Navy on June 30, 1949, he continued to serve as Commander, Fleet Activities Yokosuka, Japan, until relieved of all active duty on June 30, 1950.