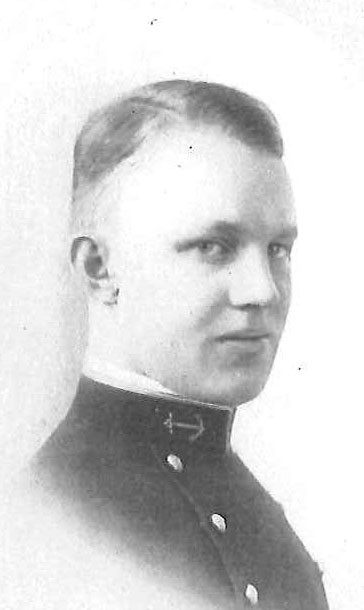 Frank Edmund Beatty was born in Washington, DC on June 17, 1894, son of the late Rear Admiral Frank E. Beatty and Mrs. (Anne Meem Peachy) Beatty. He attended Washington School for Boys and the Army and Navy Preparatory School before his appointment to the United States Navy Academy from the First District of Minnesota in 1912. Graduated and commissioned Ensign in June 1916, he received temporary promotion to Lieutenant, both grades, during World War I, and subsequently progressed in grade until his promotion on June 25, 1944 to Rear Admiral to rank from January 31, 1943. Upon transferring to the Retired List of the Navy on June 1,1951, he was promoted to Vice Admiral on the basis of combat awards.

After graduation in 1916, he joined USS New York, flagship of Commander, Battle Division 9, Atlantic Fleet (Admiral Hugh Rodman, USN), which from December, 1917 to November, 1918 operated as Battle Squadron Six with the Grand Fleet. Detached from the New York in January 1919, he served consecutively in the destroyer Roe and the battleship Wyoming until December 1920. The next two and a half years he was under instruction in mechanical engineering (ordnance design) at the Postgraduate School, Annapolis, Maryland, and at Massachusetts Institute of Technology, Cambridge, Massachusetts, where he received the degree of Bachelor of Science in Mechanical Engineering in June 1922. He continued under practical instruction at the Naval Powder Factory, Indian Head, Maryland, and other naval activities until June 1923.

He served in USS California, flagship of the Battle Fleet, from June 1923 until June 1926, when he was ordered to the Navy Yard, Washington, DC, as Officer in Charge of the Fire Control School. After two years, he was detached and returned to sea duty as Executive Officer of USS Borie, serving from March 1928 to June 1929. He then joined USS Omaha, serving as her Gunnery Officer until May 1931. He was again on duty in Washington for two years at the Naval Gun Factory, Navy Yard.

In June 1933, he assumed command of USS Long, with Battle Force Destroyers, and in March, 1934 was given duty as Gunnery Officer on the staff of the Commander, Destroyers, Battle Force, USS Detroit, flagship. The next June he transferred to the staff of Commander, Destroyers, Scouting Force, USS Raleigh, flagship, for duty as Aide and Flag Secretary. Detached from that assignment in April 1935, he joined USS Richmond, serving for a year as her Navigator. In April 1936, he reported to the Naval Mine Depot, Yorktown, Virginia, and served as Executive Officer of that station throughout 1938. In the spring of 1937, he had detached duty in London as Aide to the Naval Representative, of the President of the United States (Admiral Hugh Rodman) at the Coronation of King George VI of England, and as such, was presented the Coronation Medal by the King upon that occasion.

Detached from the Yorktown Mine Depot in December, 1938, he became Fleet Operations Officer and Assistant Chief of Staff to the Commander in Chief, Asiatic Fleet, USS Augusta, flagship. He served until March 1940, then transferred to duty as Executive Officer of the Augusta. From February 1941 until March 1943, he was Aide to the Secretary of the Navy (Frank Knox), and while in that duty was presented the Order of the Southern Cross, Rank of Commander, by the Government of Brazil.

On April 1, 1943, he assumed command of USS Columbia. He was awarded the Legion of Merit, the Bronze Star Medal, each with the combat distinguishing device, V, and the Navy Cross while in this command. He also received a facsimile of, and Ribbon for the Navy Unit Commendation awarded Cruiser Division 12, of which the USS Columbia was a unit. These citations in part follow:

Legion of Merit: “For exceptionally meritorious conduct…as Commanding Officer of the USS Columbia in action against enemy Japanese forces in the South Pacific Area, from May 1943 to June 1944….While operating with Task Group THIRTY-SIX POINT NINE and with Task Force THIRTY-NINE, (he) expertly directed his ship in the bombardment of enemy installations on Munda, Buka airfield and the Shortland Islands, causing numerous large fires, destroying an ammunition dump and silencing all hostile shore batteries engaging in the Columbia…(he) rounded valuable assistance in covering the landing on the beachhead at Empress Augusta Bay and in the destruction of an enemy plane off Bougainville…”

Bronze Star Medal; “For meritorious service as Commanding Officer of the USS Columbia, attached to a Task Group of the THIRD Fleet, during operations against the enemy Japanese-held Islands of Kolombangara, Shortland and Bougainville, in the Solomons Area, the night of June 29, 1943…(He) took advantage of adverse weather to lay a large quantity of explosive mines along sea-lanes extensively used by the enemy and, in addition, delivered a smashing naval bombardment against shore installations on these islands…”

Navy Cross: “For extraordinary heroism as Commanding Officer of the USS Columbia during action against enemy Japanese forces in the Solomon Islands Area from October 30 to November 2, 1943…under terrific fire from hostile shore batteries and aerial attacks, participated in the initial bombardment of Buka-Bonis and the first day-light assault on Shortland-Faisi-Ballale. Against a Japanese task force of superior fire power, he fought his ship with suburb skill in a victorious engagement which resulted in the sinking of five enemy warships and the damaging of four. Later, when sixty-seven hostile bombers launched a deadly attack against his task force, (he) directed the anti-aircraft fire of the Columbia in a vigorous barrage which assisted in shooting down 17 Japanese planes…”

Navy Unit Commendation – Cruiser Division 12: “For outstanding heroism in action against enemy Japanese combatant ships off Empress Augusta Bay, the night of November 1-2, and the hostile air attack of the morning of November 2, 1943… Without fighter cover when attacked during withdrawal by an overwhelming aerial force of high-level and dive bombers with fighter escort, the cruisers sent up an umbrella of five-inch bursts, accurately finding their targets through the shrapnel-filled air and forcing the Japanese to retire with heavy losses. An aggressive daring group, coordinating as one powerful weapon of destruction, Cruiser Division TWELVE achieved a notable combat record, made possible only by the courage, seamanship and daring determination in each ship’s company…”

In July, 1944, he assumed duty as Commander All forces, Aruba-Curacao, Netherlands West Indies. He was awarded the Gold Star in lieu of a second Legion of Merit “For exceptionally meritorious conduct” in this command from July 1944 to May 12, 1945. The citation further states: “…(He) effectively supervised and directed the enemy attack or sabotage. Commanding all American and Dutch forces in this area, he maintained complete and thorough liaison with the Dutch Governor of the Netherlands West Indies to protect the essential maritime traffic in the several ports of Aruba and Curacao. By his foresight, tact and aggressive leadership, (he) contributed largely to the successful joint war effort of the American and Dutch government in this vital area…”

When detached from that command he became Command, Midshipmen Training Squadron, Atlantic Fleet, and served three months. In September 1945, he was ordered detached, and assumed duty as Commander Destroyers, Atlantic Fleet. In January 1947, he had orders to duty as Commanding Officer of the Naval Ordnance Laboratory, White Oak, Maryland. That science laboratory completed a vast post-war building program which was completed and dedicated in January, 1949. He remained in that command until relieved of active duty pending his transfer to the Retired List of the Navy on June 1, 1951.

In addition to the Navy Cross, the Legion of Merit with Combat V and Gold Star, the Bronze Star Medal with Combat V, and the Navy Unit Commendation Ribbon, Vice Admiral Beatty has the Victory Medal, Grand Fleet Clasp; the China Service Medal; the American Defense Service Medal, Fleet Clasp; American Campaign Medal; Asiatic-Pacific Campaign Medal; and World War II Victory Medal. He also has in addition to the Coronation Medal (Great Britain), the Order of the Southern Cross, Rank of Commander (Brazil); and the Order of Orange Nassau with Swords, Rank of Grand Commander from the Government of the Netherlands.