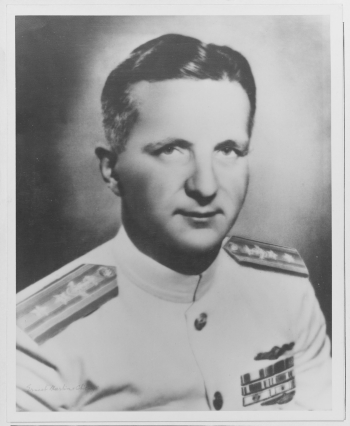 Richard George Voge was born in Chicago, Illinois, on 4 May 1904, son of Richard and Harriet (Fish) Voge. He attended Harrison Technical High School, Chicago, prior to his appointment to the US Naval Academy, Annapolis, Maryland, from the Sixth Congressional District of his native state in 1921. As a Midshipman he participated in water polo. Graduated and commissioned Ensign on 4 June 1925, he subsequently advanced in rank to that of Captain, to date from 20 July 1943. On 1 November 1946, he was transferred to the Retired List of the US Navy and was advanced to the rank of Rear Admiral on the basis of combat awards.

Following graduation from the Naval Academy in 1925, he joined USS Pittsburgh, flagship of Commander in Chief, Asiatic Fleet. While on board that cruiser he was a member of that landing force ashore during the Nationalist advance on the Bund in Shanghai, China in April and May 1927. Detached from Pittsburgh in April 1928, he then had duty in USS Pecos until February 1929, when he transferred to USS Trenton.

Returning to the United States in November 1929, he had instruction at the Naval Air Station, Pensacola, Florida, and in March 1930 reported on board USS Bridge. From July 1930 to January 1931 he had submarine training at the Submarine Base, New London, Connecticut, after which he served in USS S-29, operating on Asiatic Station. Detached from that submarine in June 1932, he then joined the Staff of the Commandant, Ninth Naval District, with headquarters at Great Lakes, Illinois, and in September 1933 became an Instructor in the Department of Marine Engineering at the Naval Academy.

On 20 June 1935 he assumed command of USS S-18, and between May and December 1937 commanded USS S-33. Detached from command of the latter, he returned to the United States and was assigned to the Naval Ordnance Plant, Baldwin, Long Island, New York. He remained there until September 1939, when he was ordered to the Norfolk Navy Yard, Portsmouth, Virginia, to assist in fitting out USS Rowan. He joined that destroyer as Executive Officer upon her commissioning, 23 September 1939, and in February 1940 assumed command of USS Sealion.

He served as Commanding Officer of Sealion until that submarine was sunk by Japanese bombs while undergoing overhaul at Cavite (Philippine Islands) Navy Yard, three days following the Japanese attack on the Naval Base, Pearl Harbor, Territory of Hawaii, on 7 December 1941. Later that same month, he became Commanding Officer of USS Sailfish, and for outstanding service while in that command was awarded the Navy Cross, the Bronze Star Medal with Combat “V”, and also received a Letter of Commendation with authorization to wear the Commendation Ribbon and Combat “V.  The citations follow in part:

Navy Cross:  “For successful attacks on a Japanese cruiser and aircraft carrier in January 1942 and March 1942, respectively, while commanding the USS SAILFISH.”

Bronze Star Medal:  “For heroic achievement…during the Third War Patrol of (the SAILFISH)…in Japanese controlled waters north of the Malay Barrier from  February 19 to March 19, 1942…(He) delivered a torpedo attack against a heavily escorted aircraft carrier of approximately 26,900 tons, severely damaging the hostile vessel, skillfully maneuvering the SAILFISH to evade enemy countermeasures he brought her safely to port…”

Letter of Commendation: “For meritorious conduct…as Commanding Officer of the USS SAILFISH during the Fifth War Patrol…in the South China Sea from June 15, 1942 to August 1, 1942…(He) aggressively penetrated an enemy escort screen and delivered a smashing torpedo attack which resulted in the sinking of a valuable 7,000 ton enemy vessel…His conduct throughout was in inspiration to the officers and men in his ship…”

“…Captain Voge skillfully organized and placed into operation the highly effective methods by which our submarines have sought out and destroyed the enemy. Resourceful and intelligent in his analysis of Japanese ship movements and strategy, he was able to coordinate the operations of all submarines in the Pacific Fleet with other forces with the result that millions of tons of enemy merchant and combat shipping were sunk or damaged; further, he contributed immeasurably to the inauguration and success of air sea rescue operations in support of air strikes against the Japanese Home Islands…Tireless and zealous in his devotion to duty, (he) rendered distinguished and invaluable service toward the ultimate blockade of the enemy’s Empire and, in consequence, the neutralization of his ability to maintain a war machine…”

In June 1945 he became Historical Officer on the Staff of Commander Submarines, US Pacific Fleet, and continued to serve in that capacity until March 1946, after which he was assigned to the Office of the Chief of Naval Operations, Navy Department, Washington, DC. He remained there until relieved of all active duty on 27 August 1946, and on 1 November, of the same year was transferred to the Retired List of the US Navy. He died on 17 November 1948, at the United Hospital, Port Chester, New York.